As the author of "A Killing in Costumes," I play detective to discover the origins of the cozy mystery genre I love 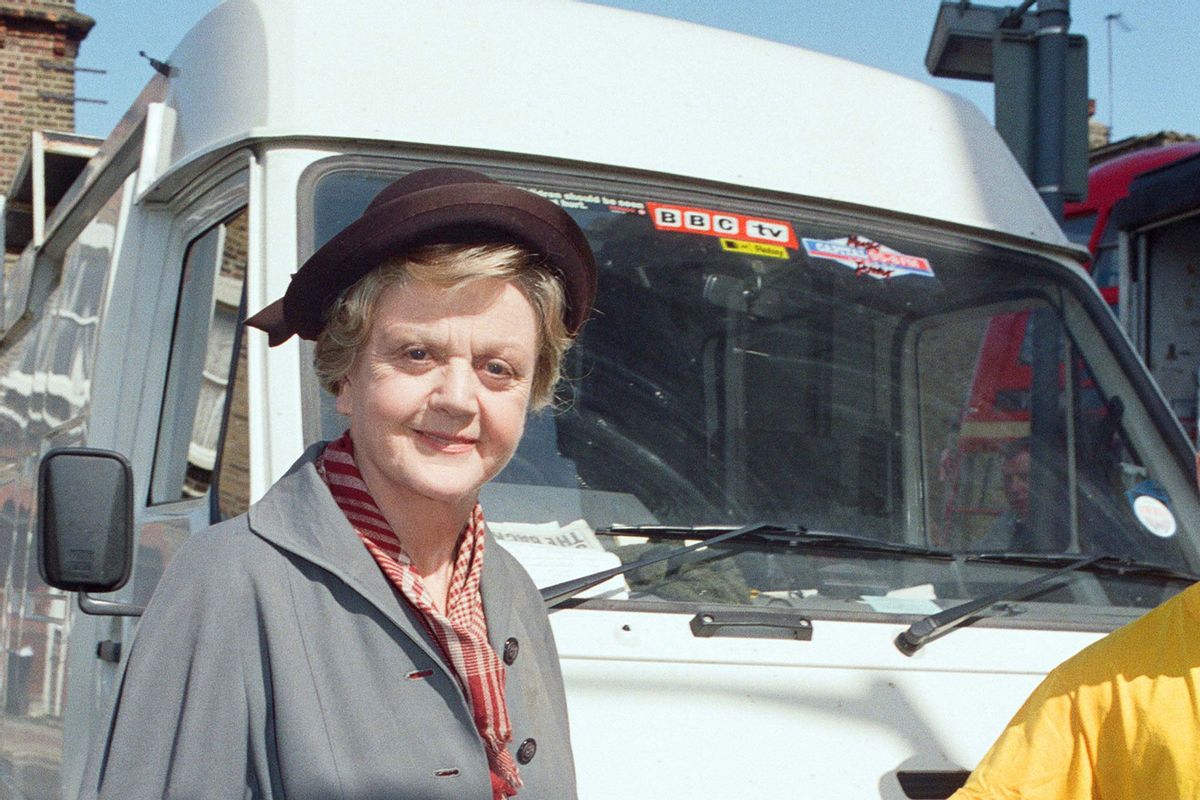 Angela Lansbury on set of 'Murder She Wrote', 19th May 1992. (Julian Brown/Mirrorpix/Getty Images)
--

It was 1983, and Tom Sawyer, that's his real name, had just stepped out of a screening room in the producer's building at Universal Studios.

He walked into Peter Fischer's office, past the cocktail table to the desk, and sat down to discuss what he'd just watched: the first 20 minutes of the pilot of "Murder, She Wrote," a new mystery series starring Angela Lansbury, a 59-year-old film and stage star making her TV series debut. She hadn't been the first choice for the show, but CBS approached her after Jean Stapleton of "All In the Family" fame turned the part down. TV hadn't been Lansbury's first choice either. As she put it in a 1984 TV interview promoting the first season of the show, "I love the musical theater and to leave that was very hard for me, very hard. But I did have to face the fact that it wasn't happening there for me."

Both the show's creators and its star went in with some reservations, but the magic was clear from the beginning: 20 minutes was all the network had needed to order 22 episodes, and 20 was all Sawyer needed to see to know he wanted to write for it.

Poirot at 100: the refugee detective who stole Britain's heart

It was a big opportunity for Sawyer, a former commercial illustrator who had landed in Hollywood a few years prior, lying about his age and dyeing his hair to get himself under the magic age of 30, above which there were no opportunities for screenwriters at the time.

And now he was in a meeting with Fischer, a former writer for "Columbo," who had teamed with that show's creators for "Murder, She Wrote."

Sawyer looked at the man he hoped would be his new boss.

"So what kind of mysteries are these?" Sawyer asked.

"I'll be honest with you," Sawyer said, speaking in the blunt mode he says was typical of Hollywood types of the era. "I read a few of those when I was younger and they bored the shit out of me and I won't write them for you."

"Then what will you write?" Fischer said.

"I want to write 'The Maltese Falcon,'" he said, thinking of the 1930 Dashiell Hammett novel that became one of Humphrey Bogart's most iconic films.

Fischer thought about it. "That'll be just fine."

"'The Maltese Falcon' was and continues to this day to be the seminal modern detective story." 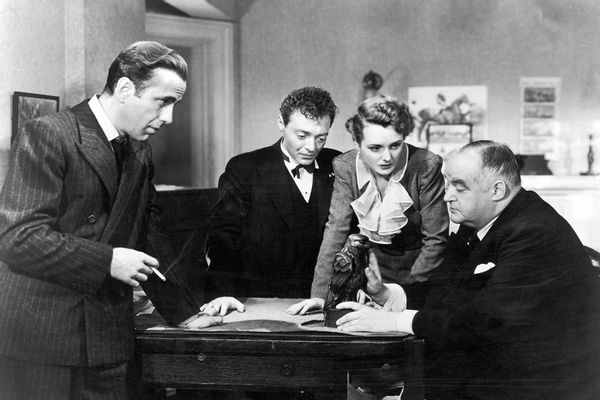 Sawyer began work on the show immediately, and was with the show, with the exception of a short break in the middle, from its inception through its 1996 series finale after 12 seasons and 264 episodes. He worked as a producer on the show, wrote 23 episodes, and was the showrunner for the last few seasons, working closely with Lansbury. And the whole time, "The Maltese Falcon" remained his north star for the show.

Speaking from his home in Malibu, Sawyer told me, "'The Maltese Falcon' was and continues to this day to be the seminal modern detective story." He explains what made it so different from the traditional mysteries that preceded it: "There was a murder and you got your closure at the end but you almost didn't care who did it because of the fascinating characters — a drama where a murder happens to take place."

In a memoir about his career, Sawyer writes that each episode of "Murder, She Wrote" was "a play about a bunch of really colorful, interesting characters in conflict with each other, and someone would be murdered. That was "Murder, She Wrote." Characters, rather than puzzles, would drive things.

Because of its massive reach — 40 million weekly viewers in its prime — "Murder, She Wrote" laid down many of the tropes of what would become the cozy mystery genre.

I was struck by Sawyer's description of the show because one the show's main creators describes a vision for the show that is so at odds with how most fans of the show would think of it today. The idea that "Murder, She Wrote" was more inspired by Dashiell Hammett than by Agatha Christie is like finding out the Backstreet Boys were trying to emulate The Beatles. But Sawyer makes the case compellingly: "Murder, She Wrote" never used the "suspects-gathered-in-the-ballroom gag," as Sawyer puts it, nor did most episodes feature Mrs. Fletcher interviewing suspect after suspect. There's very little of Jessica Fletcher doing traditional detective procedural work. Rather, interpersonal conflict ensues while Fletcher observes and mediates, and clues are mostly revealed to her and to the viewer in the course of other events. Hardboiled in a dowager disguise, Mrs. Fletcher is independent-minded and free of sentimentality, always ready to take a dispassionate stand for truth.

Because of its massive reach — 40 million weekly viewers in its prime — "Murder, She Wrote" laid down many of the tropes of what would become the cozy mystery genre, a turn toward the soft-boiled and drama-driven, away from the procedural, genius detective mode of Agatha Christie.

While Fletcher was often visiting friends in episodes, the writers avoided giving her too much of a personal connection to the cases—and Fletcher never comes across as emotional, or anything other than empathic but stoic.

That directive came from Lansbury herself, much to Sawyer's chagrin.

"My first thought when I got the gig was, Holy shit, I'm gonna be writing for Angela Lansbury," he told me. "But it drove me crazy to be writing for someone with her range as an actress and using so little of it. She didn't want to seem emotionally involved in any of the murders — that was basically her call. When I tried to violate it, she didn't do it." 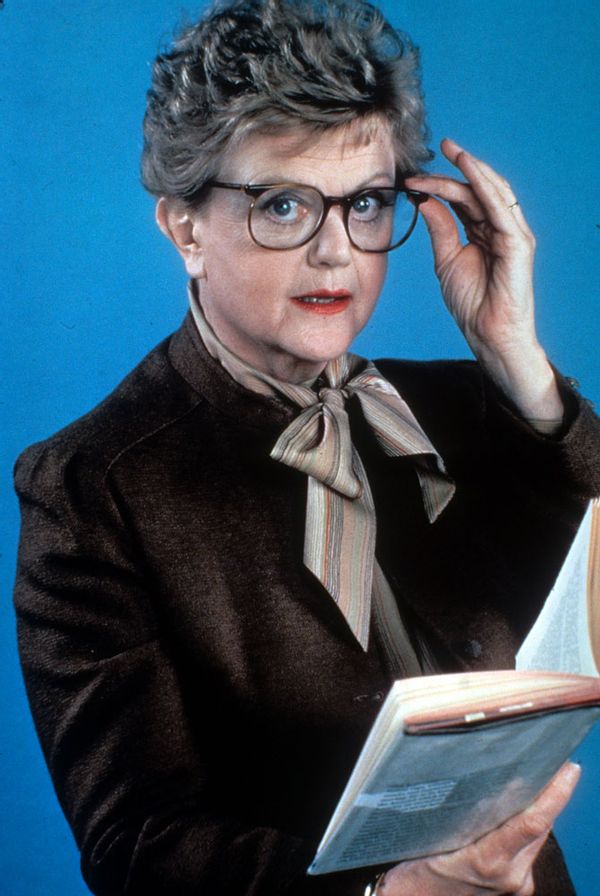 Angela Lansbury holds a book in publicity portrait for the television series 'Murder, She Wrote', Circa 1984. (CBS/Getty Images

The time Sawyer tried hardest to get Lansbury to play a more emotionally involved role was in "The Return of Preston Giles," from 1990's seventh season.

Few writers in the cozy format — a genre now dominated by cartoon-style covers and amateur sleuths running folksy crafts businesses or working in libraries — escape the tracks laid down by "Murder, She Wrote."

"In the original script, I had him dying with his head in her arms." But when they got to the set, it didn't happen. "She didn't play it that way. She played it as she was standing several feet away when it happened."

"I don't know why that was, I think it was just her take on the role as an actress, and she wasn't going to mess with it. We never argued about it. We got along handsomely. I adored working with her, she was so cooperative, never gave me any trouble at all."

Sawyer, like most viewers, credits Lansbury as the major reason for the show's long-running success.

Few writers in the cozy format — a genre now dominated by cartoon-style covers and amateur sleuths running folksy crafts businesses or working in libraries — escape the tracks laid down by "Murder, She Wrote." In my case, the connection is literal. The premise for my debut cozy, "A Killing in Costumes," which stars two Hollywood memorabilia dealers in Palm Springs battling for a 90-year-old former film vixen's costume collection, came to me after I bought, at a Hollywood memorabilia auction, a portrait of Jessica Fletcher painted as a prop for the show.

In other cases the inspiration is less direct, but it's always there.

Indeed, to paraphrase what the novelist Harlan Coben once told me about Robert B. Parker's influence on private eye novels, it seems 90% of cozy writers cite "Murder, She Wrote" as a major influence, while the other 10% lie about it. Today, cozy mysteries are their own section at Barnes and Noble, with top-selling series includes Jenn McKinlay's "Library Lovers Mysteries," Laura Childs' "Teashop Mysteries," and Kate Carlisle's "Fixer-Upper" series.

Mia Manansala, whose millennial cozy "Arsenic and Adobo," which features queer characters in a Filipino-American community and an exploration of body shaming, was the genre's breakout debut of 2021, cites "Murder, She Wrote" as a "heavy influence."

"I grew up in a multigenerational household," she remembers. "My love for mystery came from being with my grandparents every day — no wonder I have old lady tastes! We watched 'Murder, She Wrote,' 'Matlock,' and 'Perry Mason.'"

But it was "Murder, She Wrote" that made a lasting impression.

"The human aspect of it," she says. "This older widow stumbles into these random situations and they are dramas. For me, what I love about cozy and amateur sleuth is that it's an average person whose life is upset and it's the connections they have and the people they know, the relationships, not just a procedural investigation. If you watch 'Murder, She Wrote,' it's almost like a tawdry drama with a smart woman trying to solve a murder. That's what I like and it's what I want my books to be."

Jon Land, a former board member of the International Thriller Writers and the author of several of the recent "Murder, She Wrote" novelizations, credits the show with the emergence of cozy mysteries as a genre.

"You have to remember," he tells me, "the cozy mystery as a genre didn't even exist when the show went on the air. 'Murder, She Wrote' proved that a female amateur sleuth top-lining a TV show could be Top 10 [by] solving crimes, so why not do that in books?"

While "Murder, She Wrote" remains a huge inspiration for a subgenre of books that continues to grow in popularity, the show did not herald the arrival of traditional mystery shows as a television format. Indeed, few people could mention another cozy mystery TV series.

"You would've thought there would be some kind of spinoff or copycat or something," Sawyer says. "It's partly lost to distraction," referring to the intricate plotting that requires careful attention from the viewer. "The marketplace has changed and because everybody has their phone in their hands all the time, it is a different world."

But its influence on books aside, "Murder, She Wrote" is probably still the most watched traditional mystery show, 25 years after it went off the air, thanks to streaming and reruns on networks like Cozi TV and Hallmark — where Sawyer still records each episode.

"Each week we check to see which three we've got, and if any of them were favorites of mine."

New York Times bestselling author Zac Bissonnette‘s first novel is "A Killing in Costumes," out Aug. 9. He lives in New York City with his partner and a tuxedo cat named Perry Como