"Knives Out" isn't as sharp as it thinks it is 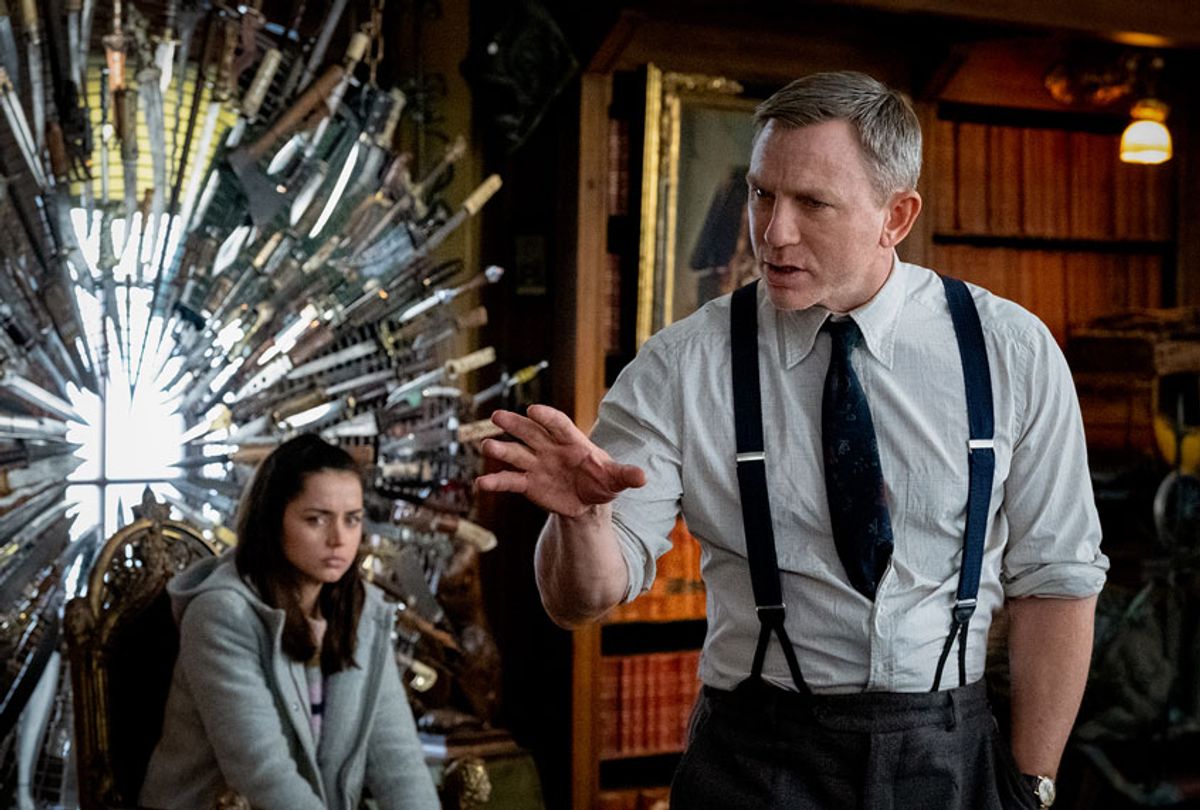 This time of year calls for certain flavors. While some prefer the treacly sweetness of rom-coms and family favorites, others among us long for fare that’s meaty, lavish and carved with surgical precision. “Knives Out,” an old-school mystery with an ample cast and plenty of gorgeous, chewed-upon scenery, amiably fills that appetite. But it’s ultimately more of a deli platter from the Kroger than the delectable buffet it aims to be.

That we are living in a golden age of late-stage capitalism darkly comic horror is undoubtable, and writer-producer-director Rian Johnson’s (“Looper,” “Star Wars: The Last Jedi”) dishy whodunnit certainly fits in neatly with its 2019 brethren “Parasite,” “Joker” and “Succession.” The wealthy, pathologically self-absorbed Thrombey clan would fit in just fine with the Waynes and the Roys. Gathered together by their patriarch Harlan (Christopher Plummer, who only seems to be enjoying himself more with every passing year), a bestselling novelist, the family is well-stocked with all the shifty, avaricious potential murderers and unreliable narrators as one would expect in a mystery, albeit with a few very 2019 tweaks.

Harlan’s teen grandson Jacob (Jaeden Martell)  is a budding alt right troll, perfectly styled to resemble a cross between Jacob Wohl and those preppy psychos from “Funny Games.” Thrombey’s widowed daughter-in-law Joni , meanwhile, is an aspiring wellness influencer, the kind of woman whose entire demeanor suggests a crystal collection and an enema addiction. And there’s a kindly young nurse Marta (Ana de Armas), whose stakes are raised by her family’s immigration status. Throw in a healthy collection of more traditional usual suspects — the black sheep grandchild (Chris Evans, doing a bang up job matching Plummer’s jaunty twinkle), the philandering son-in-law (Don Johnson) — and how else is Grandpa’s 85th birthday celebration going to end but with a housekeeping screaming by his corpse? Enter one enigmatic cop (Lakeith Stanfield) and an even more enigmatic private detective with the flamboyant name Benoit Blanc (Daniel Craig, drawling like he’s Scarlett O’Hara, because sure, why not?) and it won’t be long before people are scouring the estate for incriminating footprints, howling hounds, and secret entrances.

It’s all serviceably fun. It’s just that it’s the kind of fun that could be almost entirely contained in the film’s adroitly paced trailer. Where the film suffers most greatly is in placing Harlan’s nurse Marta in the central role of plucky heroine (or is she?), a woman so pure of heart she cannot tell a lie without puking. Marta, the one person who truly cares about old Harlan, is a figure of so little consequence to the rest of the family that they take turns confidently misstating where she’s from. She is presented as a kind of protagonistic parallel to the brilliant, subject-of-a-recent-New-Yorker-profile detective, the good and true (maybe?) heart in the center of a nest of selfish one-percenters.

And when called upon to be resourceful, Marta can certainly play the game, clambering around in the dead of night and trying to keep her lunch down. But she is never given the delectable swagger that every other character gets to trot out, confined instead to being the Clue character with her head in a bucket. You know what happens when you make a movie with this much campy zest and then you put the least zesty person in the middle of it? You get a good, not great, movie. Just ask the well-known critic who sat next to me at the screening I attended. I eagerly await his review, and wonder if he’ll mention that he promptly fell asleep and snored audibly through most of the film.

“Knives Out” wants to be a heady homage to star-studded classics like “Murder on the Orient Express,” “Gosford Park” and “8 Women,” with a modern nod to all the issues your family will be fighting over at every gathering over the next few weeks. Certainly no one could accuse the cast of not bringing its A game. Michael Shannon adds just the right touch of trademark simmering rage to his turn as Harlan’s quietly useless son, while Jamie Lee Curtis looks like she could scratch glass with a single withering glance as his real estate mogul daughter. And if you like your gothic with a slice of action, there are explosions and car chases along with the expected lethal injections and anonymous letters.

But the whole works still hang upon a not very charismatic central figure and a not very twisted mystery. “Knives Out” wisely refrains from overstuffing the  goods with convoluted twists and loose ends, but it also settles for a  disappointingly deflating final act. The 2015 BBC remake of Agatha Christie’s “And Then There Were None” offered a similar collection of very naughty people in a very big house, but stayed true to the black-hearted magic trick of a truly great mystery's twist. Even this year’s “Men In Black: International” and “Charlie’s Angels” — balls of fluff though they were — conveyed more delight in their reversals and reveals.

It’s a fine line between confident, complex storytelling and mere gimmickry, and “Knives Out” will not leave anyone feeling cheated in the end. But I doubt it will leave anyone feeling especially dazzled either, by its just clever enough plot machinations, just progressive enough politics, and just fun enough performances. The knives are out all over the joint; they just never go very deeply anywhere.

"Knives Out" is currently in theaters nationwide.