Is this the worst time in American history to be a mom?

The existential gloom surrounding parenthood is greater than ever. Is motherhood really that bad right now? 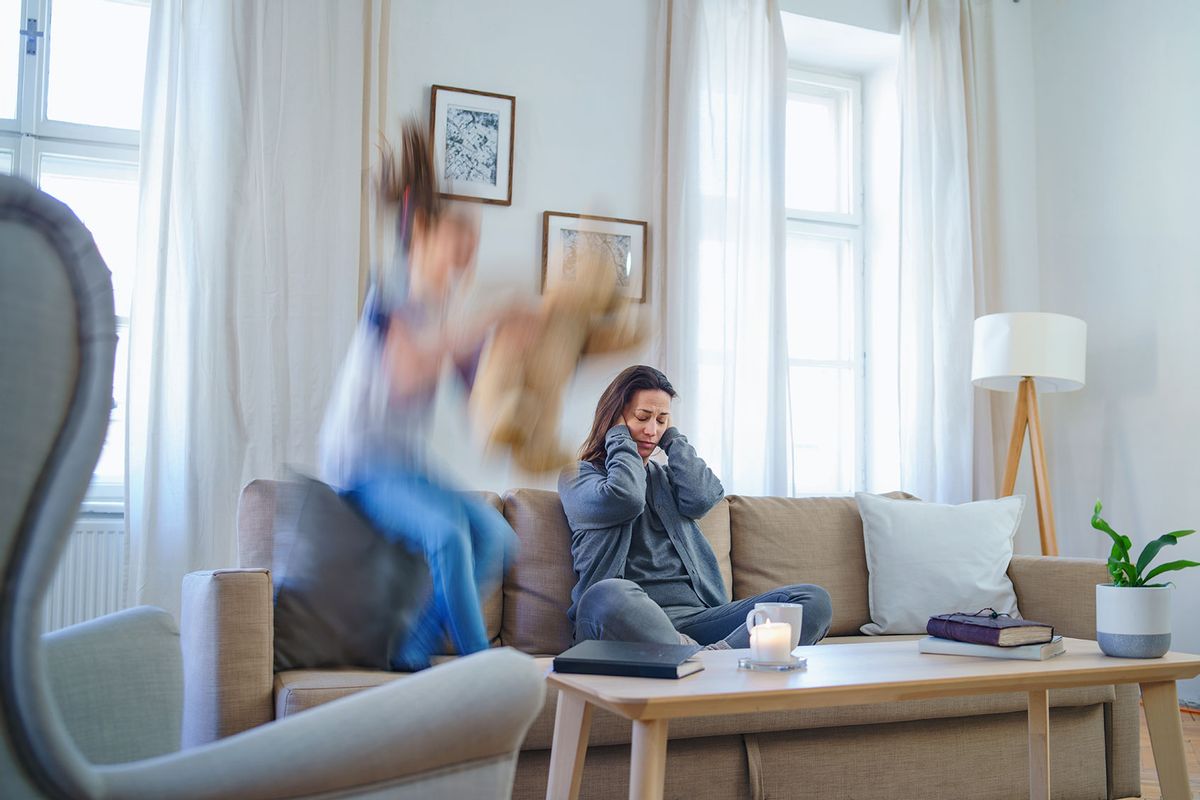 Earlier this year, while attending one of my first prenatal appointments, my doctor explained to me how pregnancy care had changed during the pandemic. In the new care regime, my husband wouldn't be able to attend most of my prenatal appointments; in fact, many would be virtual. I would be able to have two support people in labor and delivery, no visitors (although that could change soon). I was given this spiel in a chilly, dark office, as news notifications popped up on my phone: another depressing climate change report, a survey about how parents have never been as stressed as they are today.

"Motherhood is just the best," an older mom assures me. And I want to respond: Have you read anything about parenting lately?

The next few months, my pregnancy would unfold over an even more unsettling backdrop. A war was ravaging Ukraine, prompting fears of nuclear war. A baby formula shortage emerged, and then the U.S. Senate declined to pass the PUMP ACT that would have given 9 million working women breastfeeding protections at work. Surprise, I'm having a girl! — but, oh no, she will now be growing up in a country without guaranteed reproductive rights.

At night, before I fall asleep, I scroll through Reddit parenting forums to see what new parents are saying about what it's like having a kid right now. Many of the posts have depressing titles: "Stressed," "Lost myself," or "Logistically, how do I manage going back to work?"

Why parenting books can make you feel bad about yourself

At the beginning of my pregnancy, a friend warned me to prepare for a chorus of voices emphasizing all the worst parts about becoming a mom: sleepless nights, how my world will completely change, how hard it is to be a working mom, and the unaffordability of childcare. Yet at the grocery store, older women ask how far along I am. Is this your first? "Motherhood is just the best," one assures me. "You're going to love it." And I want to respond: Have you read anything about parenting lately?

Throughout my pregnancy, I found my mind wandering to thoughts of what motherhood must have been like for earlier generations of Americans — when it seemed easier, or at least was portrayed that way. Certainly, my mother, and my mother's mother, raised children in an era when income inequality was less stark, when the middle class still existed, when our planet was less polluted — even if gender equality was in a less developed state than it is now.

Perhaps there is some toxic positivity to this line of thinking. But it seems that millions of moms — and moms-to-be — are feeling something similar: a collective feeling that this might be the worst time in American history to be a mom. Is there any truth to that?

"There's no straightforward answer," Sarah Knott, author of "Mother Is A Verb: An Unconventional History," and a professor at Indiana University, tells me over email. "It depends who we're asking about: Americans' experience of motherhood has always depended on factors like race and class."

Knott provides a few examples. Like how before the Civil War, "enslaved mothers were exploited for both their reproductive and productive labor by white overseers and masters." Indeed, babies were forced to be separated from their mothers during slave auctions. The children of indigenous women were forced to attend boarding schools that were created to "civilize the savage." Clearly, those were some pretty horrible times for mothers in America.

"[T]he hardest time was in the 19th century when people had this culture that valued their individual attachment to individual children so highly, but children were dying at high rates."

"So there is very ugly American history in which mothers' power over their own lives and the lives of their children were shockingly constrained," Knott said. "Meanwhile, white mothers often benefited from the labor of Black and indigenous women, and they fashioned a sentimental idea of motherhood as natural, fulfilling and frictionless."

Rebecca Jo Plant, an associate professor of history at the University of California-San Diego, agreed there have been historically more challenging times.

"I think the hardest time was in the 19th century when people had this culture that valued their individual attachment to individual children so highly, but children were dying at high rates," Plant said. In 1800, the child mortality rate in the United States for children under the age of five was 462.9 deaths per 1,000 births. "I wouldn't say there has never been a worst time to be a mother, I would not go that far — but it's hard [right now]."

Plant brings up how despite remarkable medical advances, Black women in America are facing a maternal healthcare crisis. Researchers estimate that Black women are up to four times more likely to die from a pregnancy-related cause than white women. Overall, the United States has a much higher maternal mortality rate compared to other developed countries. In 2017, 41 percent of moms were the only or primary breadwinner for their families, but many women were forced to leave the workforce to care for their children during the pandemic. Indeed, COVID-19 exacerbated challenges American mothers were already facing: a buckling education system, lack of accessible childcare, no guaranteed paid time off for new parents.

"We have basically no social support for families and motherhood, we have maybe the second highest rate of child poverty among so-called industrialized or wealthy nations... you're more likely to be poor if you're a child than if you're an older person," Plant said, noting that social security exists for older Americans, but not for dependents like children, which speaks to how American society values "producers."

"Downward mobility, the assumption that you're one generation is going to do better than the next, has really taken a hit — if you do have kids, so much more is required today."

Dr. Harvey Karp, pediatrician and Founder & CEO of Happiest Baby, told Salon he thinks of motherhood today as akin to the introduction to "A Tale of Two Cities" by Charles Dicken, which begins "'It was the best of times, it was the worst of times." Medical advances are saving more children's lives; hunger in America is less than it was in earlier eras. Yet, as Karp says, "there are some very serious concerns underneath that."

"I see a lot of people who have a child, and then it dawns on them how much they are longing for a childhood that they had in Iowa, Indiana or Minnesota or Louisiana."

Those serious concerns include "anxiety in children and depression among young mothers — and one of the things from my point of view, that is a critical issue, is the loss of the extended family," Karp said. "Parents have this terrible misconception today, and mothers especially, that they are supposed to be everything, do everything and provide everything for their babies — that's what a good mother does — but a good mother always had a network, and matter of fact, when you had a baby, you were a babied as much as you were babying the baby."

Karp says that as more people move away from where they grew up, they lose support from extended family.

"It's interesting for me having been a pediatrician in Los Angeles where there are so many transplants there," Karp said. "I see a lot of people who have a child, and then it dawns on them how much they are longing for a childhood that they had in Iowa, Indiana or Minnesota or Louisiana and the things that were part of what it really meant to be a child — being around family, having cousins around."

So perhaps this isn't the worst time in history to be a mom, though the situation isn't great. But why is everyone so negative on motherhood?

Knott noted that we are aware of a lot of the visible hardships that surround motherhood due to "20th-century feminist commentary." In other words, it's the "dismantling of sentimentalism," which Knott said is "good news."

"It owes to the difficult situation of American women today, especially compared to their peers in other wealthy nations: the loss of reproductive rights that allow people to determine whether and when they want to have children; the absence of a welfare state that offers healthcare from cradle to grave, and the now notorious racialization of maternal and infant health; weak maternity leave provision; expensive childcare; the underfunding of the public school system; and so forth," Knott said.

I'd be lying if I said I didn't occasionally have thoughts like, "am I crazy for having a child in America?" It certainly feels daunting, scary, and really hard. Unlike many women in America, I do have resources for childcare and family nearby to support me.

On a late night social media scroll, I ask a parenting forum: is this going to be as hard as everyone makes it out to be?

"Honestly, yeah, at times it can certainly be as bad as everyone makes it out to be," one parent writes back. "But watching them experience everything for the first time really helps you appreciate all the things in life we take for granted; I always say that our kids wrecked our life, but in the most awesome way."

The movement of life inside me slithers like a snake in the water. Her feet poke against my ballooned uterus, shifting the symmetry of my belly from minute to minute. Each tap and kick ticks like the hand of a clock, a countdown to the end of our time entwined together. In a way, pregnancy has been a microcosm of life itself — a lot of pain, a lot of joy, a lot of discomfort, and uncertainty. I suspect motherhood will be more or less the same.