You’ve been storing your “good” butter the wrong way

It's time to think beyond the refrigerator 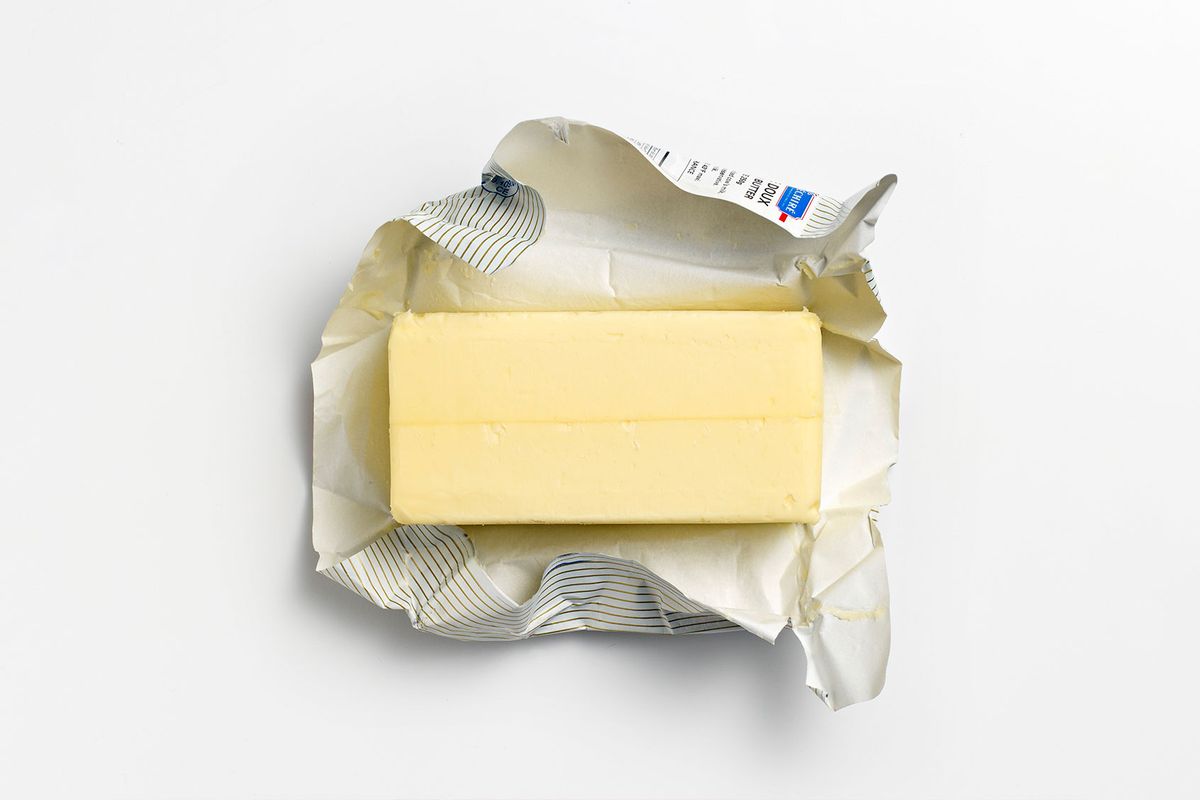 An unwrapped pat of butter on its wrapper (Hussey, Clinton)
--

I first learned to really love butter in a suburban diner called Corfu. Located about 45 miles outside of Chicago, the restaurant looked like someone had gutted an old Denny's, saved the furniture and then painted a large-scale mural of coastal Greece before finally putting the chairs and tables back on the dining room floor.

My mom and I went there for lunch so often that we eventually established a kind of routine. We'd go around 1 p.m., after the bulk of the lunch rush, slide into the merlot-colored pleather booths and peel the vinyl menus off the freshly wiped tables. Our orders remained unchanged for years. She'd get the chef's salad with Thousand Island dressing, while I'd go for the open-faced turkey sandwich topped with a peppery brown gravy.

The moment I probably looked forward to most, however, was when the waiter would bring a steaming basket of rolls, along with two different types of butter — orbs of whipped butter nestled in flimsy white plastic packets and salted, yellow pats enrobed in golden foil — which felt like an incredible decadence at eight or nine years old. Since then, I've retained an adoration for good butter, ranging from Amish butter rolled in tidy, wax paper sleeves to goat's milk butter that is so fatty it's almost pearlescent.

Recently, however, I realized I may not be storing that good butter in the way that best accentuates its flavor.

5 tips for buying better butter at the grocery store, according to an expert

The germ of uncertainty was planted when I received an email from Food & Wine with the subject line "This TikTok-Famous Tool Keeps Butter Fresh for Weeks."

I clicked through, expecting some breaking revelation in the world of butter storage, only to find out that the youth of TikTok have seemingly fallen in love with vintage French butter bell crocks, exactly like the one my mom had kept on our kitchen counter. If I'm being honest, that one was largely only used for decoration. The sticks of butter we used on a daily basis lived in that little covered compartment over the condiment shelf in the refrigerator.

I scrolled through video after video of home cooks preparing their butter bell — a stout, ceramic tub with a lid — by pouring cold water into the base. They'd then pack one 1/2-cup stick of butter into a bell-shaped cup underneath the lid, ensuring that there was no remaining space or air bubbles. Finally, they'd place the lid back on the base. An airtight seal of water both cools and insulates the butter, keeping it at the perfect temperature for spreading.

Stephen Chavez, a chef-instructor at the Institute of Culinary Education, said his family always kept a butter bell at home.

"There are many varieties of crocks or ceramic butter containers that can be left safely at room temperature for an extended period of time," he said. "This is the way that I recommend saving your butter for best quality and flavor and spreadability."

According to Southern Living, 46% of Americans have "no idea" that butter can be stored on the countertop — and only 22% of them actually do. (When I polled a small group of Twitter followers, 62.1% said they kept their butter in the refrigerator.)

Forty-six percent of Americans have "no idea" that butter can be stored on the countertop.

There's a variety of reasons for this, ranging from our country's obsession with temperature control to differences between the butter made in America and the rest of the world.

"Most American butter by law is made up of 80% fat," Chavez said. "European butter is made up of 82% fat; which doesn't seem that great of a difference, but think of the difference in flavor and texture between 2% milk and nonfat milk. Fat is something that can be used to preserve food, which means that good quality butters are safer from spoiling at room temperature than most other food products."

However, storing butter in the refrigerator comes with its own disadvantages, namely that the butter begins to set and get hard.

"Butter has what is known as a narrow plastic range, which means that it doesn't spread when it's cold — it shatters," Chavez said. "Because of this, we have to take it out of the fridge and keep it at room temperature in order for it to be creamy and usable. Butter is [also] susceptible to absorbing odors and flavors, as well as the possibility of bacterial spoilage. So, an air-tight container will be great to prevent both. If butter is left open in an area that has other food products, it can affect the flavor of the butter greatly."

So, feel free to keep your "everyday butter" — the lower-fat supermarket stuff you lop off the stick to use for scrambling an egg or tossing with steamed broccoli — in the refrigerator, preferably in an airtight container. But if you're in the habit of at least occasionally treating yourself to high-fat European or artisan butter, do yourself a favor and transfer it to a butter crock in order for it to really shine. You (and your morning toast) are worth it.

about how to use your butter