Director Julian Higgins on using a "homesteader in the classic western" to push against the myth of U.S. equality 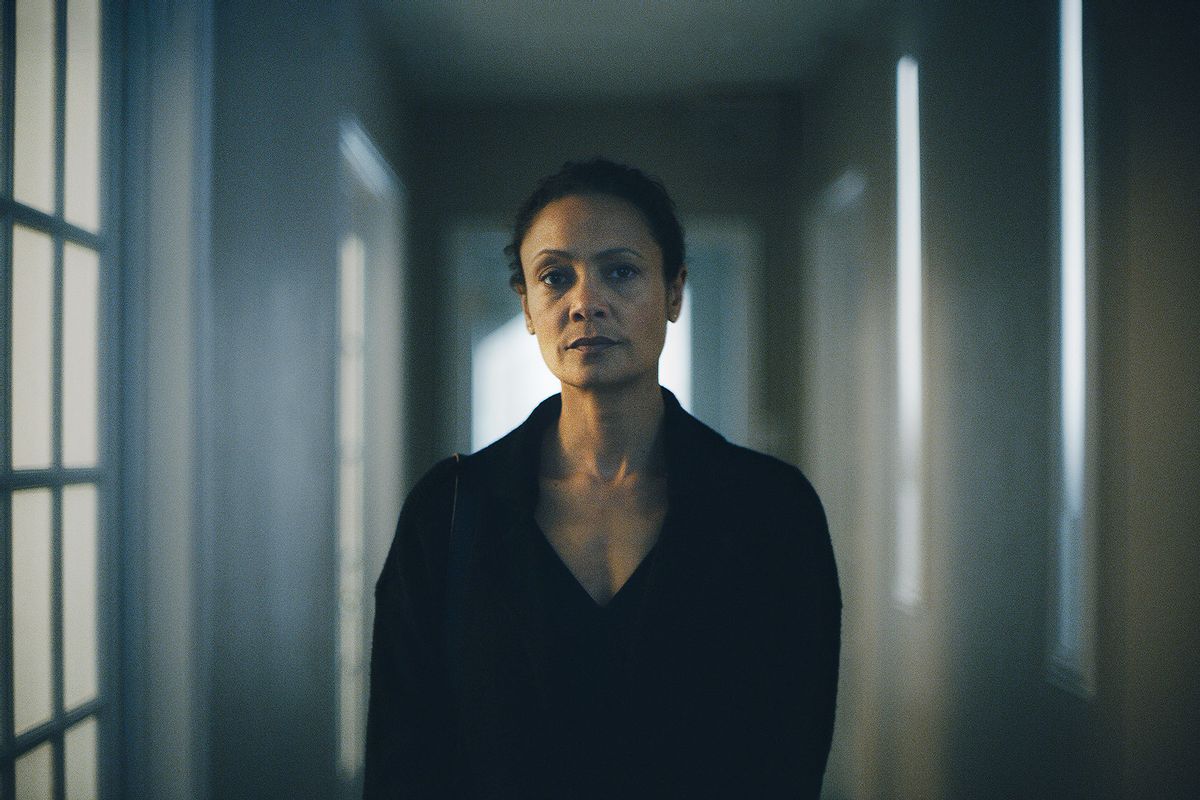 "God's Country," directed by Julian Higgins, who co-wrote it with Shaye Ogbonna, is a knockout, a precise and exacting film about consent and respect, confrontation and vengeance. The story takes place in Montana where Sandra (Thandiwe Newton) — the sole person of color on screen — teaches at a local college. She lives alone in a big house on the edge of a canyon. One day, two brothers, Nathan (Joris Jarsky) and Samuel (Jefferson White) park their truck on her property. She leaves them a note about this. When she sees the truck again, she asks them nicely not to park there. They ignore her request, and she retaliates. They respond violently, and that prompts Sandra to involve the local sheriff's deputy, Wolf (Jeremy Bobb). This only causes this feud to escalate.

However, Sandra is also troubled by some difficulties at work including the appointment of a new dean, and a situation that develops between her colleague, Arthur (Kai Lennox), and a student, Gretchen (Tanaya Beatty). These subplots also involve issues of race and consent.

Higgins slowly builds the drama to a shattering climax. This, along with Newton's superb, rigorous performance — she reveals so much without dialogue — is why "God's Country" is so fantastic.

The filmmaker spoke with Salon about his searing drama.

Early in the film, Sandra tells her students about change, loss, and resistance, and how you feel there is nothing you can do. Her battles with the two brothers, as well as Arthur are wars of attrition. Can you talk about developing the micro and macroaggressions in the film?

What Sandra says is what I say to my students on the last day of class — those moments in our lives when it feels like we are running up against a wall and don't know what our options are. That is the feeling that began this whole process. Early in 2017, shortly after the election, I was speaking with my writing partner Shaye Ogbonna, about how we were feeling at that time, and all the dynamics and feelings at that moment and wanting to do something and respond to what we felt were incredibly pressing issues in the world and the country. We were angry, sad, and scared. All those feelings went into the project. Those feelings are a daily struggle for me, to navigate being alive in this time. We wanted to be honest about those feelings in a movie that people would actually want to engage with them.

As far as the microaggressions go, this is the dramatization of the personal is political idea. We all have different experiences of the society that we share. Even being outside of an experience, we can observe what is happening around us. My mother is a feminist film scholar, and I grew up with a lot of those influences. Shaye was raised by his mother in a Black, church-oriented community. We were bringing a lot of what we experienced and seen into the movie. It's quite a personal movie for both of us, as strange as that might seem.

What can you say about creating Sandra's character? She is very strong and vulnerable and surprising, which is why we root for her.

The project was to use what we've observed as writers — and what we know as participants in society and what we care about — and use the tools of the medium to make the audience enter Sandra's point of view as much as we could. Thandiwe's character is in every scene, and she is very much our lens on to what happens, and we made choices about where to put the camera to put the audience in her shoes. But it's important that characters are three-dimensional, complex human beings who can make mistakes and have contradictory feelings and are not archetypes. It does not serve our story to have good guys and bad guys with that kind of simplistic understanding. It just doesn't feel true. 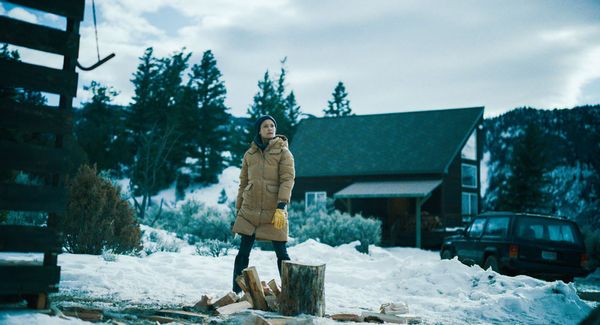 The film follows the genre conventions of a Western. Did you have any films or characters in mind when you wrote "God's Country?"

Shaye is a big Western fan. It's not my favorite genre, to be honest, but it's America's genre. It makes sense in telling a story about the state of our country, and the history of our country and how things function now that we'd chose that genre. We really played into that when we were writing it. I placed Sandra as the homesteader in the classic western. Someone who wants to carve out their piece of world and left to do what they want to do. The hunters are bandits. We have the town, the sheriff, the school mistress who doesn't know how things work. We wanted to flip those things. Those types exist and you might recognize those scenes, but we are looking do different things to subvert genre and make you aware of the expectations that you bring.

The film is about rights. Sandra feels she is well within her rights. She also doesn't feel safe. She has issues with the process of the Dean nominations, and there is talk of right and wrong and winning. She tells Gretchen she has a right to be angry because of Arthur's behavior. What observations do you have about these themes and why use this story to present them to comment on class, race, and other social issues without being too explicit?

It is challenging the premise that we are supposed to buy into about the equality presented as the ideal — which isn't the case for a majority of people in the country. We do treat people differently and they do have different experiences with things, including the rights that they are supposedly entitled to. We wanted to take a character, who is at a disadvantage in this society that has been constructed. I, the white man, is the one society is designed for. The Black woman is not considered to be at home in the society we built. Basically, we try to dramatize that, so that anyone can see that and how that works. In the scene when Sandra first turns away the hunters, she is asking for something anyone can relate to: If you want to park on my property, you need to ask me first. That's just logical and makes sense. But in this world, she's not allowed to say that. They know that, and she knows that. That's the subtext of that scene. She's strong enough to go there. We wanted to give this character some grit and it is based on how she hopes the world could someday be. That is where is it coming from for us as writers; we want a world that works for everyone, and it makes us angry and sad that it's not.

What can you say about the use of space and framing in the film? I kept thinking you must have studied Walker Evans photos or have other visual cues for the painterly images.

The landscape in Montana is so big, and that's really connected to the themes in the story. It holds so much history and has witnessed all of these struggles. But the film also takes on an existential dimension. The struggles of these little people are so inconsequential. Nature is going to be here long after we are all gone. Landscape also gives a sense of isolation, and it is a place where she wants to feel safe and comfortable, and so beautiful but at the same time, it does expose her to potential danger, so it is this irony of her being who she is in this place.

I'm very interested in the use of silence in the film. What decisions did you make in how you let various scenes unfold without music or dialogue, just ambient sound?

The script was written with the idea that there would be no score; it was written with sound design in mind. I'm from a small rural town in New Hampshire, and I love winter and that feeling of being outdoors in a snow-blanketed field and there is a sense of quiet — which is easy to drown out with music, or sound design. The film is designed to allow that experience to understand the concept of silence where there is a lot of sound going on, that crackling proximity in juxtaposition with quiet. That's the sound of winter to me. The wind, crows, trains, there is thematic purpose to these things but it's not something you are to notice, but an experience you have. So much tension and suspense come from quiet.

There are scenes of rain and water throughout the film. Can you discuss why you included them?

In therapy, water imagery is emotional overflow; it's called flooding. And water imagery is always associated with an excess of emotion. It teases out what we learn about her backstory while also keeping viewers intrigued about what is going on with her. It comes out in her more private moments, where she is contemplating a photo, or having an experience on her own. This idea that something is brewing inside of her and getting strong as the movie goes along. I like when a movie has an abstract set of images because it allows you to access more of the fairy tale and mythic quality. The burden of what she has to deal with and carry just by existing is what we wanted to express. To me, that makes what she does, so much more courageous. She is still striving, given everything she has experienced, to make the world work the way she hopes it could work.

The film asks a very pointed question: How much do you choose to be the person you are? What is your response?

That is about as clear a statement of the question of the movie as occurs. I think every day about these cycles or ours — personal, national, and social — cycles we seem to be stuck in because we refuse to be honest about our own history. Is there a way to interrupt these cycles that we seem to keep returning to? That is the challenge of the movie. We made the movie to provoke that conversation. We hope by asking those questions, we allow people to contemplate those things. That is the thing that continues to trouble us.

"God's Country" is in theaters Friday, Sept. 16. Watch a trailer via YouTube.