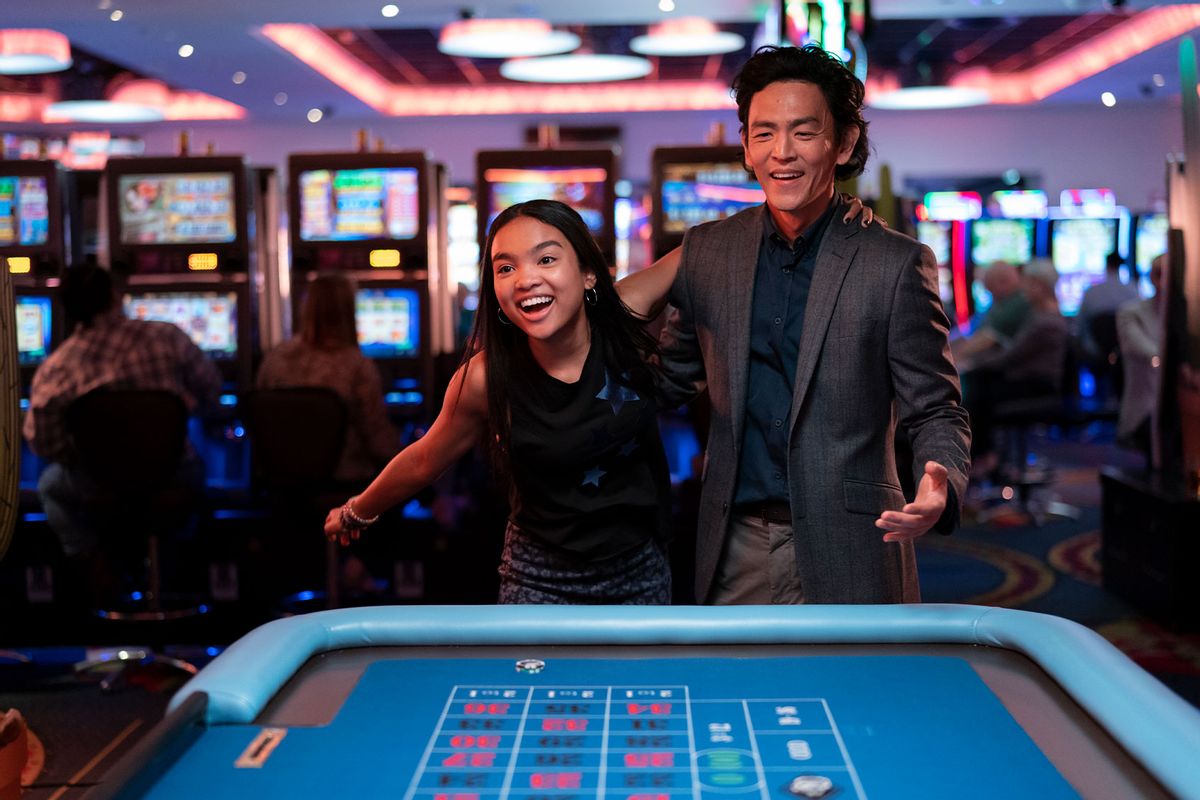 John Cho delivers a heartbreaking performance in the terrific if bittersweet father/daughter tearjerker, "Don't Make Me Go," directed by Hannah Marks. Max (Cho) is the single, play-it-safe father to the responsible teenage Wally (luminous newcomer Mia Isaac). When Max insists Wally accompany him on a road trip to his college reunion, she does not want to go. Wally is having issues with Glenn (Otis Djanji), a classmate who is hesitant about becoming her official boyfriend. Max's plan — unbeknownst to Wally — is to track down his ex-wife as she is his daughter's only living family. He has just been diagnosed with a bone tumor near his brain and has a limited time to live.

As they travel from California to New Orleans, Max teaches Wally life lessons as well as how to drive. And, as in any road movie, the characters fight and bond, discover new things about each other (and themselves) and have some horrible experiences — such as a scene at a nude beach.

Like his turn in the poignant "Columbus," Cho is in low-key mode here as Max is both sensible and overprotective. And part of the strength and depth of his performance is how thoughtful Max is with Wally, even at his angriest. Max is patient with his daughter at a casino, albeit less so when she is merging into traffic. But when he gives her advice during a dance or goes with her to a karaoke bar, these characters show how much they love each other. During some of the more emotional moments that involve hard or hurtful words, there is caring and compassion.

"Don't Make Me Go" shows the push-pull relationship between father and daughter which, along with the strong performances is why this film is so affecting. (Warning, it may wreck viewers.)

Cho spoke with Salon about his new film, his karaoke skills, and a memorable family road trip.

Max has to make an important decision in the film and is risk adverse. Do you often play it safe? In what ways are you "boring and grown up," and in what instances do you take a chance?

"The non-diverse stuff is the fiction. This felt authentic to me."

I am very protective of my loved ones. For instance, I wanted my parents to be in a room during COVID and never come out to protect them, and they were like, "We have to take some risks," and they were obviously more willing to take risks for themselves than I was comfortable with. That is a tension all throughout my life. I'm very open to risk for myself and closed out to risks for my loved ones.

The film does not really address issues of race, though they do hang in the background; Wally's mother is Black. Moreover, I appreciated that there was no overt racism in the film, no stereotypes other than the straight white men in the film being mostly douchebags. Was that important to you for the project and is this another step forward?

I didn't really think about it. It came naturally. The script was written for a white man, I believe. Hannah wanted me in the role, and we looked for an actress to play my daughter. We auditioned various actresses with different racial backgrounds. We went with Mia because she felt like the right choice. That led to the casting of the mom. That fits in with my overall worldview about diversity, which is that non-diverse stuff is unnatural and diverse is very natural — it's what you see in the world. The non-diverse stuff is the fiction. This felt authentic to me. There was no mention of [Wally] being biracial explicitly in the script. Hannah asked Mia if there was an opportunity to bring it up if there is something natural from her childhood that might fit it in, and there were a couple of instances. But the focus was on the relationship, and it didn't seem natural to jam any of that in in this particular narrative.

The scene of Max and Wally dancing was one of many that brought me to tears. How are you doing with applying the lessons you learned from your parents to your children?

"This is not in the text, but if there is a subtextual Asian reading of the film, that's it for me. I grew up in a family where we children were protected from a lot of stuff that was hidden from us."

Obviously, being a father attracted me to script, and it also made me feel there was something I could bring to the material. It is a lesson that I am in the process of learning — and it has taken me decades — and I am still learning how to be present and prioritize who and what is important. In my line of work, I meet so many people, more people than is normal, so it's critical that you have to be selective about who you let in, and who you spend time with, and who you value. The smaller the circle the better for me. It is something that I am struggling with. To me, the film is a testament to the time we shot it in, which is early pandemic — and that time was so terrible, because we couldn't see our loved one and our friends — so we got this opportunity to make this movie about treasuring that, so it seems fitting that is the lesson of the film for me.

The film is about "masking," in that several characters hide painful truths to protect other people's feelings by pretending things are OK. Can you talk about that facet of the film? It's important that Max reveal things to Wally but often his hand is forced, which does both of them a disservice.

This is not in the text, but if there is a subtextual Asian reading of the film, that's it for me. I grew up in a family where we children were protected from a lot of stuff that was hidden from us. I don't know if that is healthy or not and I struggle with that as a parent — what to reveal to them and what to protect them from. It's a balance.

I wrote a middle-grade novel ["Troublemaker"] that came from a very similar circumstance, but it wasn't personal. It was us watching George Floyd's murder and the Black Lives Matter protests and asking, "How do we engage children in this and how much do we tell children the history behind it and what is going to be counterproductive and what is going to be productive?" That's the balancing of parenting I feel.

Whereas Max was wilder in his youth, he is very overprotective now. Wally, however, is from what the film shows mostly responsible. What observations do you have about Max and Wally and their issues with trust and truth and the power struggle they have?

"I don't mind making an ass of myself at karaoke. It's a low-risk situation to me."

From Max's point of view, a lot of parents are afraid their children are going to do exactly what they did, and sometimes they are ascribing personality traits that are not actually present, or seeing what's in front of them; not being present and not actually receiving information from their children, does a disservice to them. The journey of the movie is that Max, through that time in the car, that crucible, they actually see one another. It takes a while to see someone who has been standing in front of your all your life.

How are your karaoke skills? It's fun seeing you sing and cringy to see you rap in "Don't Make Me Go."

I don't mind making an ass of myself at karaoke. It's a low-risk situation to me. But I also love hearing all kinds of voices and love karaoke for that reason. I prefer to hear people who are not good at singing. I love the sound of the human voice.

What song(s) would/do you perform at a karaoke bar?

My go-tos are "Hello" by Lionel Richie, "Beast of Burden" by the Rolling Stones, and "Like a Prayer," by a young artist named Madonna.

Can you talk about a particularly memorable road trip you made with your family?

I will give you a glimpse into Korean American family life. My parents said, "We're going to see the Grand Canyon. Let's get in car!" We drove [from Burbank] to the Grand Canyon and I'd seen the "Brady Bunch," so I was imagining when they took a mule down the canyon. We got there, got out of the car, took some pictures, got back in the car and turned around. [Laughs] "We got the picture. Let's get out of here!"