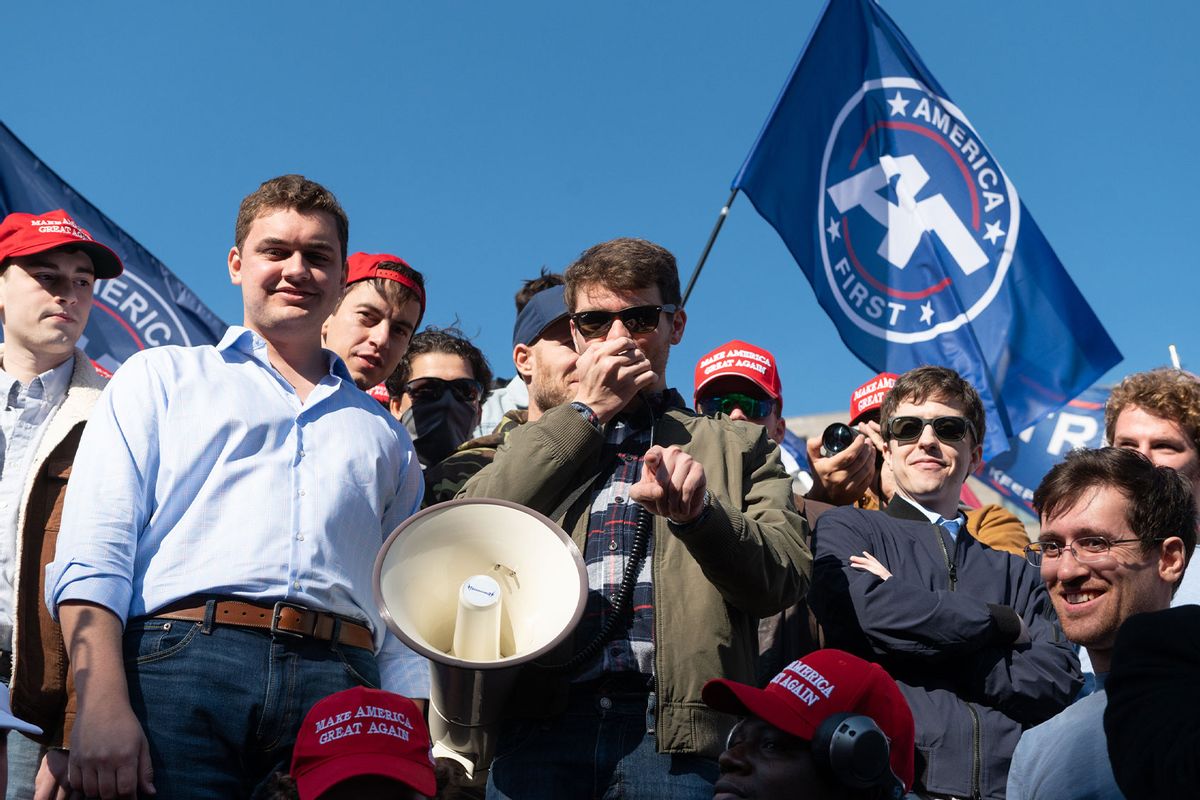 Last week, with the help of online detectives who have spent the past year and a half painstakingly tracking the identities of participants in the Jan. 6 insurrection, the FBI arrested five members of the group America First for their role in the Capitol riot. Using video footage the insurrectionists had taken themselves, along with news photos and social media clues contributed by internet sleuths, the FBI submitted an affidavit charging that these five young men helped trash House Speaker Nancy Pelosi's office and assault Capitol police officers.

The affidavit blandly describes America First, an ardently pro-Trump group, as motivated by "a belief that they are defending against the demographic and cultural changes in America." The deeper truth is this group — whose members call themselves "groypers" — is among the most shamelessly fascist of the many far-right gangs that invaded the Capitol that day. Their leader, Nick Fuentes, has declared that "Trump was awesome because he was racist," engaged in Holocaust denialism and heaped praise on various historical dictators, including like Joseph Stalin and Adolf Hitler. Indeed, he did the latter at a conference attended by Republican Reps. Marjorie Taylor Greene of Georgia and Paul Gosar of Arizona, signaling how far Fuentes' fascist worldview has crept into the Republican Party.

When you read the arrest record, what is truly distressing is how young these five men are: All are between 21 and 23. They were barely out of their teens — and in some cases still in them — when they decided to storm the Capitol. But that's exactly what America First specializes in: recruiting high school and college-age boys and young men by appealing to adolescent insecurities and convincing them that the cure for the entirely normal mix of emotions they're feeling can be found in embracing a fascist movement. This is part of a much larger trend, in which authoritarians exploit garden-variety teenage-male anxieties, especially around sex and dating, to seduce young men into far-right ideology.

Last year, Ben Lorber, a research analyst at Political Research Associates, told Salon that Fuentes — who is himself only 24 — targets "right-wing college students in order to further radicalize the next generation of conservative leaders." He goes to young Republican events — especially conferences held by groups like Turning Point USA, which dabble in racist rhetoric while seeking to remain adjacent to "mainstream" conservative opinion — seeking out young men who may already harbor bigoted opinions, in hopes of "red-pilling" them, or converting them into full-on white nationalists. But Fuentes really excels at targeting young men who believe themselves to be failing in the world of sex and dating, and using that insecurity to radicalize them.

It's not just that Fuentes and other groypers identify as "incels," a nickname for the virulently misogynist online movement of "involuntary celibates." Fuentes has tried to reinvent "incel" as an aspirational identity, telling his followers that pursuing sex with women is degrading and will only distract groypers from their true calling as warriors for the brand of white nationalism (mixed with far-right "trad" Catholicism) he's peddling. As Tess Owen at Vice reported in July, "Fuentes has called himself a 'proud incel,' urged his supporters to abstain from sex, and made bizarre assertions like 'all sex is gay.'"

No, seriously, this is his argument for why heterosexual sex is "gay": "Think about it this way: What's gayer than being like 'I need cuddles. I need kisses … I need to spend time with a woman.' That's a little sus."

For most people, especially adults, that sounds so ridiculous you have to laugh. But it's possible to understand the appeal this might have for insecure young men who are already caught up in the "incel" discourse. It recasts what they imagine as a personal failing as a point of pride. It's those other guys, the ones who are actually getting laid, who are the real losers, right? (Never mind that incels tend to dramatically overestimate the amount of sex other people their age are having.) Fuentes has adamantly insisted on the importance of celibacy for him and his followers, and had to backtrack vigorously after once signaling at a hypothetical former girlfriend:

After admitting he once kissed a girl in high school, the Groypers in Nick Fuentes' superchat taunted him for being a "fakecel." He got defensive, invoked Hitler, & insisted that he doesn't want a relationship: "All I want is revenge against my enemies and a total Aryan victory." pic.twitter.com/lsM8A5z4eH

Andy Campbell, author of "We Are Proud Boys," recently told Salon that alienation from sex and dating is woven into the culture of many different authoritarian groups. Even the Proud Boys, who claim to be virile ladykillers, are in practice mostly pretty awkward, he said, because the male-only nature of their gang means they "essentially aren't allowed to be around women," and "just don't know what to do with themselves" when faced with living members of the opposite sex.

As the Southern Poverty Law Center reported over the summer, America First has endured some prominent defections recently, including "sidekick personality Jaden McNeil and techie Simon Dickerman, two key players in Fuentes' coalition." As usual when these groups have crack-ups, there were a bunch of accusations about money and power. But one central element of the split appears to be that Fuentes was furious that McNeil got a girlfriend.

"McNeil specifically claimed that Fuentes opposed his having a girlfriend and boasted about searching his furniture with a blacklight to look for semen stains," the SPLC reports. As Nick Martin of the Informant reported, this fight followed another public rift between Fuentes and groyper Carson Wolf, which seems to have started when Wolf dared to question the ideology of celibacy.

All this is playing out online, of course, which means these young men are leaving behind a robust public record of their involvement with overt racism and fascism. McNeil, in particular, seems to be feeling pangs of regret over this. As Owen writes, during a podcast appearance, "McNeil said his years as a loyal foot soldier to Fuentes have left him with a 'Hatewatch' profile on the Southern Poverty Law Center's website, no money, no friends, and no prospects."

That may be a bad situation for that particular young man, but Trumpism and allied far-right movements certainly benefit from a situation that offers no easy escape. Alienating young people from a normal social life, including dating and sexual relationships, is a classic tactic of cult control. If a person has friends or potential romantic partners outside the group, they're more easily distracted from the group and its ideology. They also have something to lose, which makes it a lot harder to talk yourself into risky and foolish actions — such as attacking the U.S. Capitol, just for instance. That's why so many authoritarians target very young men, and often teenage boys. The deeply malicious strategy here is to get them in deep before they have a chance to make genuine human connections to the larger world, which are likely to lure them away from radical ideologies. Once in, with nowhere else to turn and an online public record of espousing hate, they're a lot easier to turn into soldiers willing to risk injury or arrest on behalf of the Trumpist cause — or even something worse.

about the far right in the Trump era