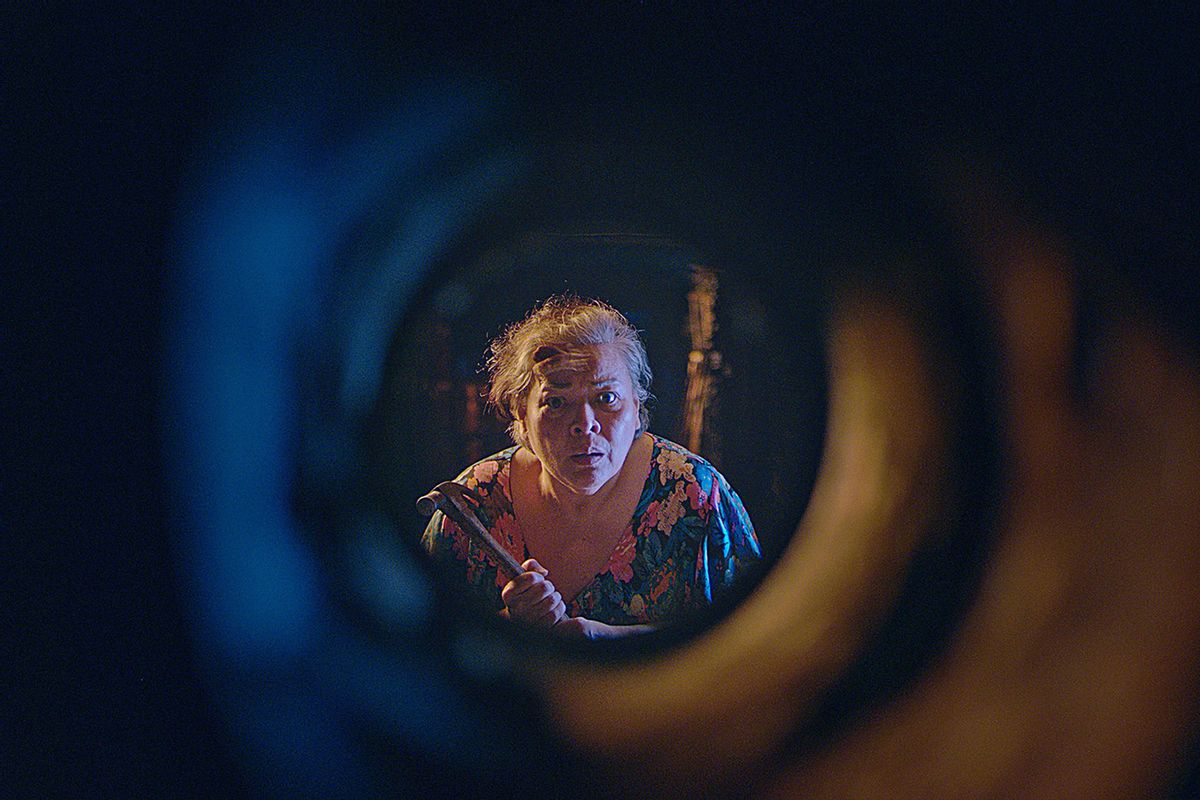 "Leonor is trying to write and revise her own life as it is happening. I also wanted to have an action star grandma."

The imaginative Filipino film, "Leonor Will Never Die" is a mash-up of action movies, melodrama, romance and moviemaking — with dance and musical numbers thrown in for good measure. The film is the brainchild of Martika Ramirez Escobar, who wrote and directed this singular cinematic experience, and for her efforts won a special Jury Prize for innovative Spirit at this year's Sundance Film Festival.

Leonor (Sheila Francisco) is a retired filmmaker who reads the obits and prefers to talk with her dead son Ronwaldo (Anthony Falcon), rather than her living one, Rudie (Bong Cabrera), who is on her case for not paying the electric bill. One day, however, Leonor is hit on the head by a TV that was thrown out a window and ends up in with hypnagogia — a state between sleeping and waking.

She soon enters a limbo that is her unfinished screenplay "Ang Pagbabalik Kwago" ("The Return of Kwango"), a film-within-the-film, in which Ronwaldo (Rocky Salumbides) romances Majestika (Rea Molina) while trying to fend off a series of bad guys. And it is all filmed like a Z-grade action film where the fight scenes are faker than wrestling. But it provides considerable fun as Leonor wanders through the film's scenes like an absent-minded grandmother wielding a hammer in case of danger.

Penélope Cruz dominates in "Official Competition," a delightful satire about ego and filmmaking

Escobar's film shapeshifts so many times between reality and fantasy, viewers may just absorb all of it like Leonor does in her coma. The filmmaker chatted with Salon about making "Leonor Will Never Die."

It's great to see Leonor as the main character in a film like this. She is immortal, ornery, playful and mournful. How did you conceive of her character and this story for her?

Leonor as a character is based on many things. Part of her is my actual grandmother. Part of it is my existential crisis as a person and wanting to know what to do next in life. Leonor is trying to write and revise her own life as it is happening. I also wanted to have an action star grandma. In the Philippines, we have hundreds of action films, especially during the '70s and '80s, but very few of them were about women, and I don't think any of them had a grandma in the lead. I wanted to see a grandma in the film. Older people are so wise, and my grandmother inspires me so much to see the beautiful things in life.

You play with genre here. There is action, there are dance scenes and musical numbers, there are moments of melodrama and more. How did you create the tone of the film, which kind of folds in on itself?

It is based on what I see on television and replays of action and comedy films. Growing up, it was a thing for families to gather to watch TV together, and that got ingrained in my mind and heart. When I was writing this, I didn't recall specific action films, but I was playing out from memory. People from my generation could recall what a Filipino action or comedy film was like, and the elements of the musical numbers, and absurd action scenes are based on what I remember growing up. This film is a combination of childhood memories of what I saw on TV.

You have a fun cameo in the film in which you consider how to end the film. Was that planned? What is the purpose of making a meta-movie other than to interact with your own characters?

I don't know what the purpose is. The last 25 minutes were not written. It came out of our struggle of not having an ending that worked. The conversations were with my actors or editors during times of panic when we had no ending. It was a long process to find an ending. We had an additional shoot and tried different scenes but none of it worked. I decided to record the screen and our audio and include it as the ending of the film because it summarizes the entire journey of this film that kept on growing and ending because of the help of other people. It made sense that someone else ended the film and not me. It took us eight years to finish this film. There were so many ideas and different worlds disjointed from each other, so we had a struggle finding the connection. Maybe it was there in the back of my head? 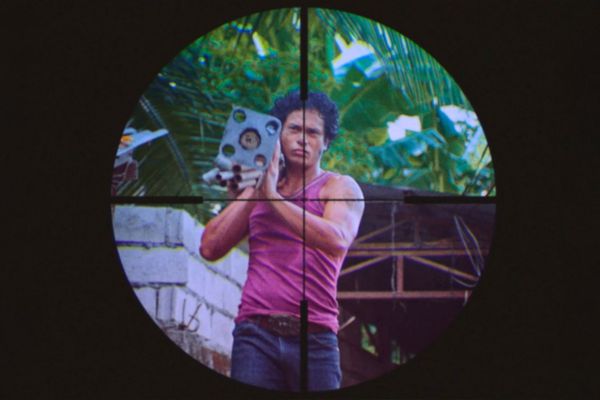 Before we talk about the film-within-the-film, can you talk about the dream sequences in the film? Viewers, like the characters, float in and out of reality.

"I wanted Rocky to be a traditional Filipino action hero but I also wanted his character to transcend this type, which is why I played around with him interacting with the film itself."

When I was writing it, these scenes were based on my dreams and how dreams operate, which are random and don't make sense. The snail scenes and the scene of grandma falling are from my dreams. Most of the film is based on things I imagine, not just during my sleep; I daydream a lot. I made notes about my daydreams and include them in my script. That's why it seems random. Dreams are random. They don't have a specific tone. That's why it was challenging to find a tone with all these random dreams turned into images.

Can you also talk about your multilayered visual style, which shifts between tone and content?

The visual style was based on how I could recall the films I saw on TV. The damage, the editing of repeated shots, etc. Action films have this unique way of capturing action scenes that I tried not to mimic but interpret in my own way. I didn't live through that generation, but I wanted to make a film that felt like it was from that generation. All of us working on the creative part of the film wanted to interpret that era for the '70s part of the film. The ghost is based on my grandmother's son who passed away. She would tell me stories where she would feel her son sit beside her in the room, so I imagined what that would be like to experience, so why not put that person there literally. There is a scene in "Mystery Train" with Elvis as a translucent spirit. I'm sure that influenced me in some way. Everything came from different sources.

What inspired "The Return of Kwango"? Rocky Salumbides was great to watch; he gets a terrific dance sequence as well as some fabulous action scenes. Can you talk about crafting this portion of "Leonor Will Never Die"?

The thing about trying to create a complete film-within-a-film was easy because Filipino action films have a template anyone can recall. You can replicate the characters and the tropes and narrative of these films. The hard part was writing the real-world scenes that would connect to these action scenes.

I wanted Rocky to be a traditional Filipino action hero but I also wanted his character to transcend this type, which is why I played around with him interacting with the film itself. The dance scene was improvised. I filmed different versions of it. I didn't know what I would use it for. The editor pieced things together and he would use multiple takes of one shot, so our editor has a lot to do with how the film makes sense because I didn't plan those things beforehand. Rocky possesses this mysterious action star vibe. One of the prominent action film actors, Fernando Poe Jr., also had that kind of aura on screen that is hard to resist.

I like that several people in the film are trying to sell their TVs and that Leonor's film is broadcast to the public along with a running saga about a pregnant man. Given your affection for '80s action films, what are you saying about how Filipinos consume culture?

In the Philippines, the experience of watching these films is a community experience. It is common to gather around TV even during dinner. It made me wonder why there are so many celebrities who are campaigning to get elected. Growing up, our president, Joseph Estrada, was a former action star. There is really something about these movies that affects us and moves us a certain way. They make us perhaps think that we are characters that need to be saved by heroes. Maybe it's our love for watching these characters, or maybe it's a different, ideal world presented to us that we do not have but want to attain. When I was young, it made sense that an action star was the president because he was famous and someone you should trust, but now that I'm older, it's absurd what happened, and it says a lot about how people are in the Philippines.

The film's statement is about "writing your own life." Can you talk about how you achieve this?

A lot of times I think life sucks, and while making this film, I was perpetually confused as to what I wanted to do in life. Whenever I talk to my grandma, she redeems all my hate about life. She sees the beautiful things in simple objects. When we travel, she takes photos of flowers instead of the monuments behind her. I think it's my grandmother's perspective on life that makes me think that it's not that bad after all. When I was trying to write "Leonor," I wanted Leonor to live the ideal version of her life, which is the happier, better version of her life, where she can resolve problems and tragedies that happened to her. But these things are only possible in our imagination, which is quite sad. But it is also something we continuously work on. The way we live is based on what we think is the next best decision. And it is going to be that way until it ends.

"Leonor Will Never Die" is playing is select theaters starting Nov. 25, with more cities added in the coming weeks.