Turkey bolognese is the most flavorful post-Thanksgiving comfort food

This immensely comforting, Italian-inspired dish has perfumed my house on many a weekend 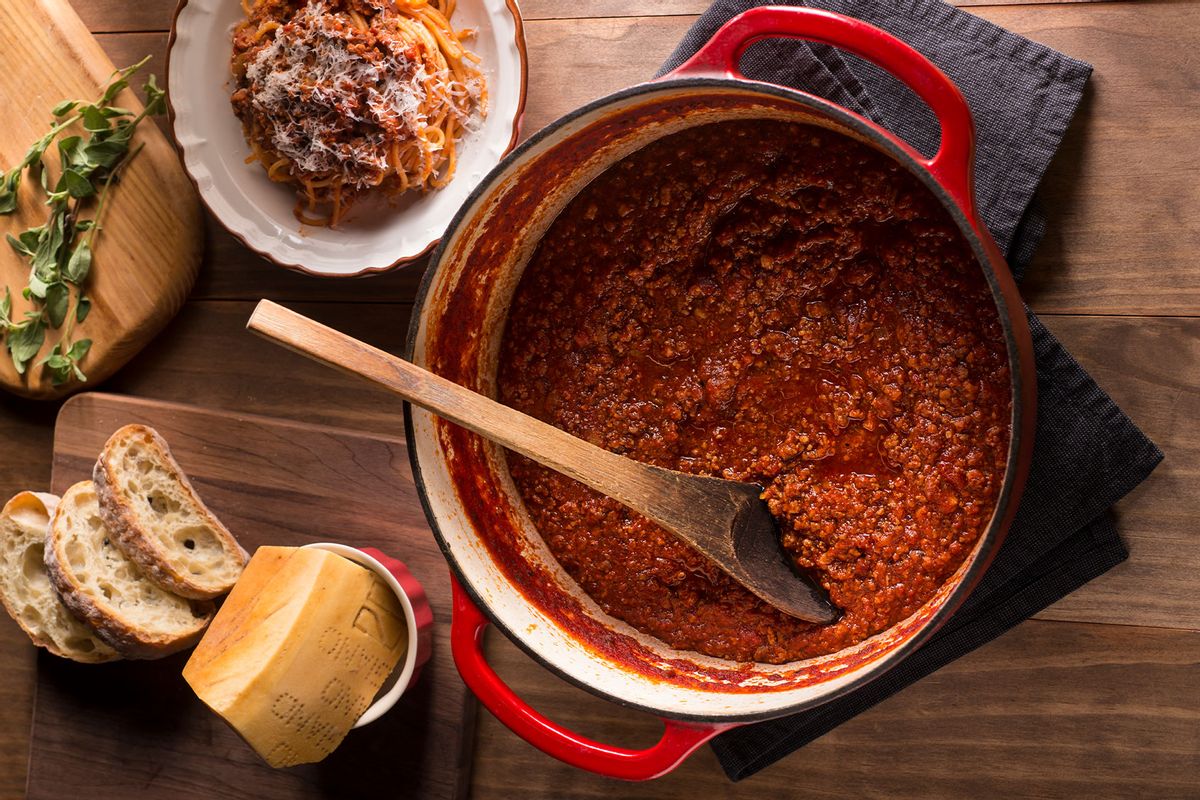 A little over a decade ago, I stumbled upon an Anne Burrell bolognese recipe that shifted my whole approach to cooking.

I had been cooking since middle school, but took a bit of a moratorium in college; however, in the years immediately following graduation, I started cooking again with a real fervor — primarily thanks to having a full, functioning kitchen at my disposal for the first time in years. I look to this recipe as a turning point in my being able to take food in a different direction entirely, which then became one of the many things that led to my going to culinary school. I've actually alluded to this dish repeatedly in previous columns, noting how it also marked another important point in my culinary school education, so it's really become quite an elevated dish in terms of both flavor and significance.

Since, this recipe has maintained a very special place in my mental rolodex and has become an automatic go-to in the fall and winter.

Beyond bolognese: A primer to 6 delectable, lesser-known pasta sauces that deserve some love

I've made little tweaks over the years, but I've remained very loyal to the original iteration. I've only ever made it during the fall or winter; it's so outrageously rich, filling and warming that it just wouldn't make any sense during any other season. It epitomizes comfort food and was an automatic go-to on any weekend when the weather was blustery and cold. Also, I only ever make this on a Saturday or Sunday — I'll get it out of the way now that it is by no means a weeknight meal. It takes a minute for it to reach its true designated flavor and thickness; don't cut this short because it is an entirely different sauce at two hours than it is at four. It doesn't call for many ingredients and the sheer amount of flavor seems like it'd indicate something special or highfalutin.

The trick, actually, is a ton of water and a lot of time.

There's something fascinating about the water component — it's the bulk of the cooking process, it doesn't require you to be in the kitchen for the entirety, but it's unique to repeatedly cook down, add water, cook it out, allowing water to evaporate and concentrate the flavors over and over, until the sauce is so immensely flavored and rich that you must eat it post haste. I was also always tickled by the sheer amount of tomato paste that this recipe calls for. I remember Anne Burrell's talking about taking each component "to the edge," essentially bringing the vegetables to a level of browning that borders on burning, then doing the same thing with the meat and then the tomato paste, before allowing the wine and water to loosen everything up, then reduce and tighten up and so on and so forth until the sauce is thick as heck and there's a slight resistance when you move your wooden spoon through it to stir.

About a year and a half ago, I pivoted to start making turkey bolognese as opposed to the red meat iteration and was stunned to find that there's barely any difference whatsoever in flavor or consistency. I expected a slight change in the oiliness or fattiness, but it's just not there. This recipe is astonishingly consistent and comforting in its reliability; it always tastes and looks the same. It is simply a perfect recipe. (I have a bunch of it frozen in my freezer as we speak)

This dish taught me something about food, about cooking, about the meaning of "taking your time," and about simplicity at large. I hope it can mean as much to you and your cookery journey as it does for me.

2 large leeks, cleaned well and roughly chopped, dark greens removed and saved for another use

A heaping mound of grated cheese

-The final product should be smooth and rich with visible chunks of ground protein, but I've found that errant, unpleasingly large chunks of vegetable are not especially appealing in this sauce, so I aim to pretty much obliterate the vegetables prior to cooking them. If you like the texture, though, then hand-chop and leave them a bit larger.

-The original recipe calls for beef while I opt for ground poultry, but feel free to use anything you have on hand: a combination of pork and veal, lamb, vegan protein crumbles or other similar products.

-Similarly, if you happen to have some leftover Thanksgiving turkey on hand and you're sick of sandwiches, why not finely chop some up and throw it into this bolognese? It's also a great way to rehydrate any especially dried out turkey.

-I always use red wine, but I've seen many a bolognese recipe that calls for white. Use whatever you have on hand.

-I actually don't use any dairy in this (which is uncharacteristic), but feel free to drizzle in some heavy cream, milk, half-and-half or nondairy milk just before serving. This will add even more body and richness to an already extremely rich dish. (I wouldn't recommend adding mascarpone or anything that might bring the richness quotient to an alarming level.)

-Speaking of, I would only use water for the reduce, reduce, reduce component — no stock, no broth. Otherwise, this dish could definitely become too rich.

-I've quite literally only ever served this with orecchiette; I like the way the "little ears" catch the sauce and turkey and the way the cheese pools inside each little cup. However, bolognese is also traditionally served with spaghetti, tagliatelle, or pappardelle. I wouldn't recommend serving with a short-cut pasta, though.

-Taste, taste, taste throughout the entire process! This requires a lot of salt to be properly flavored and you should be (as always) seasoning throughout.