In the age of megachurches, communion has become a big business

These days, prepackaged "rip and sip" plastic cups of juice and wafers are a common sight at large churches 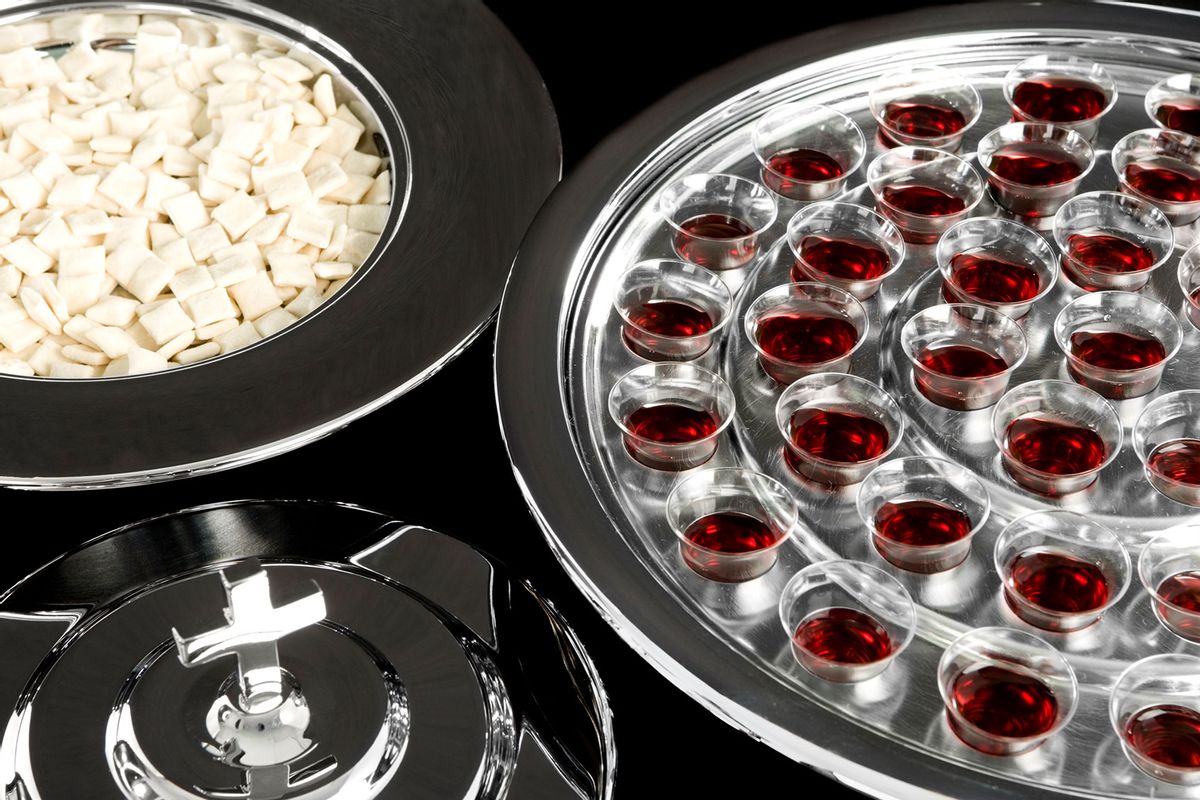 The lights dim in the five-story, 9,100-seat sanctuary of Southeast Christian Church as the sound of a synth keyboard begins to swell. On three jumbotron-sized screens suspended above the pulpit, the verse John 15:9 is displayed: "I have loved you even as the Father loved me. Remain in my love . . ."

One of the members of the worship team, a man in a white T-shirt and silky tan bomber jacket, brings the microphone up to his lips and launches into a heartfelt rendition of "Simple Kingdom," a contemporary Christian song released in 2022 by the husband and wife duo Bryan and Katie Torwalt.

This is my flesh: Holy communion as an act of human connection, from sex to childbirth to death

His voice is backed by light bass plucks, piano chords in the key of C and the crinkle of thousands of tiny plastic wrappers being peeled back. This is what communion sounds like in many churches across the U.S. today.

Southeast Christian Church, which has been operating in Louisville, Ky., since 1962, has been the country's fourth-largest church since 2019, according to the bimonthly evangelical magazine Outreach, which annually lists the 100 largest and fastest-growing churches in America. Under the Southeast umbrella, there are nine campuses across Kentucky and Indiana with a cumulative weekly attendance of about 23,000 people, most of whom take part in weekly communion.

. . . the crinkle of thousands of tiny plastic wrappers being peeled back. This is what communion now sounds like in many churches across the U.S.

While the sacrament of communion or the Eucharist — which is present in many Christian denominations and involves consuming bread and wine in remembrance or exaltation of the body and blood of Jesus Christ — has shifted in presentation and delivery over the centuries, most contemporary churches have similar systems.

Parishioners may be called to the pulpit to receive bread or a wafer from a church leader and to drink from a common cup of wine or — in the case of some more conservative denominations — grape juice. Alternatively, deacons may pass around a tray of wafers or small hunks of bread, followed by small disposable cups of juice. This is a common enough approach that most religious goods stores carry specific communion trays with slots for 1-ounce cups.

However, in the age of megachurches — as well as that of a global pandemic, which caused many churches to reconsider the sharing of bread and use of a common cup — an alternative delivery system for the Eucharist has increased in popularity in recent years. And it's something of a booming business.

These days, when attendees enter Southeast, they're guided to a row of long tables filled with small, plastic two-packs of wafers and juice. These aren't a new product, but they have been primarily used to deliver the sacrament to individuals who are hospitalized or otherwise infirm, or when worshiping outside the walls of a physical church. When indicated by leadership from the pulpit, worshipers serve themselves and eventually dispose of the cups and wrappers in the large recycling cans that are now stationed outside the sanctuary doors.

It's arguably more efficient than more traditional deliveries of the sacrament, and it reduces close person-to-person contact in the time of COVID-19. However, it's also more expensive.

While Southeast Christian Church didn't respond as to which brand of communion packs it uses by press time — or how much the sacrament costs it on a week-to-week basis — several of the most popular companies that make them, such as TrueVine and Fellowship Cup, price their products similarly.

A box of 500 communion packs from TrueVine, for instance, costs just under $150. That means that serving 23,000 attendees, as in the case of Southeast Christian, would cost about $6,900 every week. Compare that to the cost of a box of 1,000 individual communion wafers from Broadman Church Supplies, which is available for $18.99 on Amazon.

This is a wildly different budgeting reality than those experienced by most small to midsize churches.

"At my church in Nashville, we had a bread guild who made the communion bread every week, so our only costs were the wine," Schlesinger wrote to Salon Food. "I don't think it was broken out in the budget, but we'd buy large bottles of Taylor port [which cost about $15] whenever we needed them — maybe every two to three months. At my current church, we just returned to the common cup after doing wafers only since we regathered in person."

Schlesinger's current annual budget for the sacrament is $4,000, but that also includes purchases such as candles, linens and vestments. Within her denomination, specifically, using the popular plastic communion packs would be at odds with environmental concerns that she and her congregation hold.

However, as The Christian Chronicle reported in 2021, for many churches, the "rip and sip" communion cups may be the new normal.

"Before COVID-19, 21st Century Christian — a major source of communion supplies to Churches of Christ — sold the 'rip and sip' communion cups to only two congregations that used them weekly," Cheryl Mann Bacon wrote for the outlet.

Others would order small boxes for hospital visitation or homebound members, according to Matthew McInteer, CEO of the company, based in Nashville, Tenn.

"We couldn't get them from suppliers fast enough."

"Come March 2020, we sold more in two weeks than the entire previous year — a 16-fold year-over-year increase," McInteer told The Chronicle. "We couldn't get them from suppliers fast enough."

Surveys of church members conducted by both The Christian Chronicle and The Jenkins Institute, a ministry based in Nashville, found that many attendees were apathetic to the shift to "rip and sip" communion. It didn't augment, nor did it distract from, the experience.

Meanwhile, McInteer said many of his customers have indicated that they may keep purchasing communion packs at current levels for the foreseeable future.

"We've definitely talked to a lot of customers who have said, 'We may end up using these forever,'" he told The Chronicle. "But they are more expensive, and they don't taste very good."

about the intersection of food and religion