With films like "A Smoky Mountain Christmas," Parton became a Christmas leader, worthy of the top of the tree 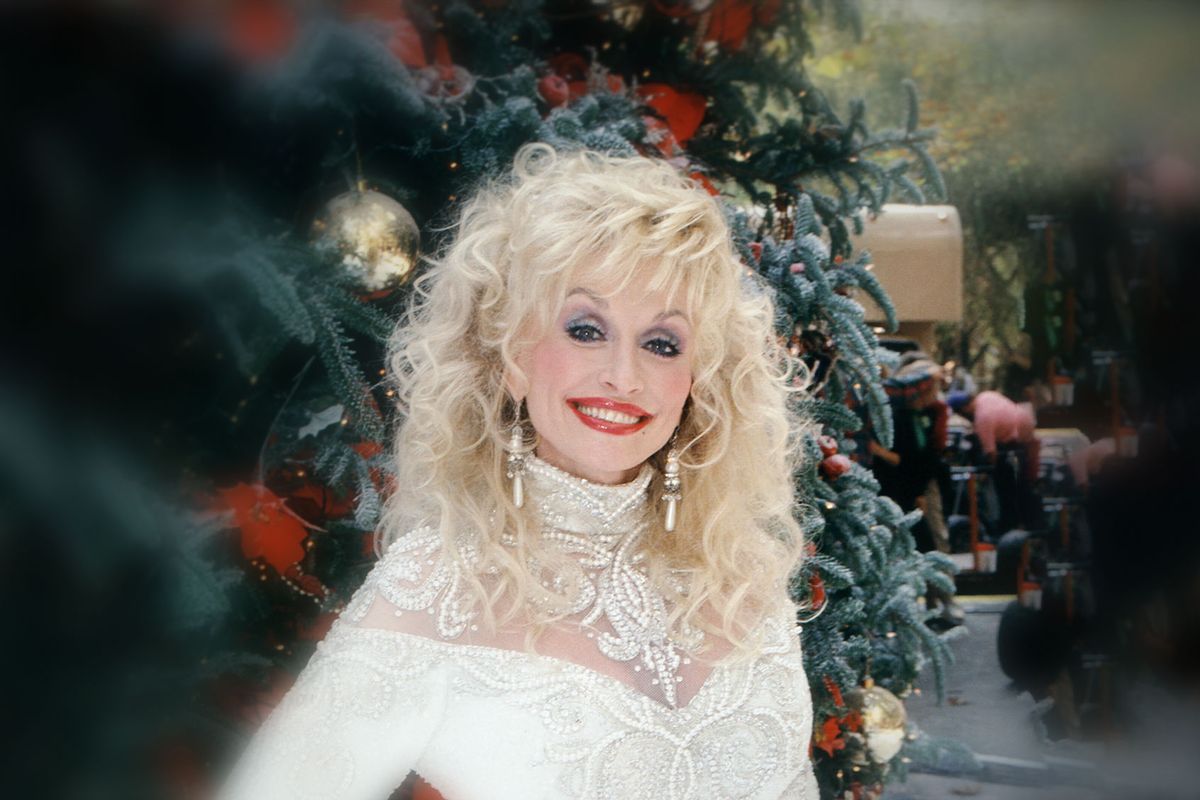 American singer-songwriter Dolly Parton poses for a portrait in front of a Christmas Tree circa 1992 in Lake Tahoe, California. (Ron Davis/Getty Images)
--

Country and Christmas just go together. Maybe it's the genre's origins in church music, spirituals and mountain songs, or its preoccupation with family. But nothing says the holiday like a fireplace crackling with real logs, sleigh bells ringing through a snowy field. Or a lonesome tune, sung with a twang.

Powerhouse singer and songwriter Mariah Carey is the undisputed Christmas queen, a title she has held since her 1994 hit "All I Want for Christmas is You"; she actually copyrighted a version of the royal moniker for herself in 2021. Carey's catchy song with its vintage-tinted video of her frolicking about in a red snowsuit marks the official kickoff to the Christmas season. When big box stores and radio stations start playing the tune, it elicits a Pavlovian response to start shopping.

Other singers before and since Carey have tried to claim and contest the title. We may only have one queen but there's a full and flourishing court. And before Carey, we had a country Christmas matriarch who still rules: Dolly Parton. Sometimes you don't need a monarch so much as a mom. Or mama. She's what we want for Christmas, a magical presence who nurtures and cares in a decidedly down-to-earth way.

Christmas can be big bucks for a country — or any — musical artist. Elvis Presley's 1957 "Elvis' Christmas Album" was only the third studio release for the superstar. It would be the first of his two holiday-themed albums and would spend four weeks at No. 1, earning gold record status when sales topped $1 million. Willie Nelson, John Prine, Buck Owens, Alan Jackson, Loretta Lynn, Charley Pride and Emmylou Harris are some of the many country performers who released at least one Christmas album.

Parton's first Christmas album was in 1984: "Once Upon a Christmas" with Kenny Rogers. Two more would follow, but so would a slew of Christmas-tinged movies.

This year, Parton has a new special, streaming on Peacock, "Dolly Parton's Magic Mountain Christmas." The new show is a musical variety program like the shows of yore and also goes backstage, "Muppet Show"-style. The show is at least her eighth Christmas vehicle (maybe more if you count "Steel Magnolias" or "The Best Little Whorehouse in Texas" as Christmas films).

But it was her first one that cemented her as a Christmas leader, worthy of the top of the tree. The 1986 made-for-TV movie "A Smoky Mountain Christmas" was a seminal part of the holidays around my house when I was growing up. Parton had already starred in "9 to 5" with Lily Tomlin and Jane Fonda by then, confirming her acting chops and letting fans know that her charisma extended easily from the stage to the screen.

"I know people talk but I'm no witch."

In "A Smoky Mountain Christmas," Parton plays a country superstar, tired of being pushed around by the fame machine. She retreats alone to a cabin in the Smoky Mountains, unbeknownst to some of her team who think she's been kidnapped. But once in the mountains, she discovers her vacation cabin occupied by a group of orphans, like extras from "The Apple Dumpling Gang." When the kids come back to their hideout to find the sleeping Parton, some of them decide she's an angel.

Parton is here to make Christmas right and to make a home for the children, taking an ill child to the local vet who passes for a country doctor, encouraging the young artist among the kids, and of course, intersplicing scenes with her songs, musical theater style.

"A Smoky Mountain Christmas" is not available on streaming platforms, which is a damn shame because it's a camp classic, complete with a rugged mountain man who bakes and a feathered-hair witch who would give the legendary Jolene a run for her money. The film nods to Appalachian magic, has a strong anti-law enforcement streak and features lines like "If that blond lady were to be staying for a spell, she'll be staying for one of my spells," "You old fooler. You mean to tell me you're from the big city?" and "Everything a witch woman does is real."

Some of the lines are more meta than others, with a character accusing Parton of stealing her man and Parton saying in her trademark, aw shucks tone, "I know people talk but I'm no witch."

Directed by Henry Winkler, the film also stars Lee Majors as Mountain Man Dan with a memorable appearance by John Ritter as a beleaguered, small town judge. But it's Parton's show, her hair as high and flammable as a traditional tree, glowing like an electric light as she rocks in a chair with her guitar. What makes a Christmas matriarch? Most of all: simple, practical love. Parton is bossy, brassy but has a heart of gold. She's not derailed by anything, not the paparazzi crashing into her house, not waking up on her private retreat to find a bunch of kids staring at her. She takes the children under her wing without a second thought. It's Christmas, after all.

Parton has always radiated a maternal love. She differs from Carey in that Parton has no biological children, but Parton is the Christmas aunt you want to visit, who spoils you with gifts and showers you with love, who knows the secrets you can't tell your parents and sees you better than you see yourself yet. And Parton has always been made of magic, inventing herself and constantly reinventing to stay relevant, beloved but most importantly, even for a figure with wigs and sequins: real.

She blows a kiss from the backseat of a sheriff's car. She defeats evil with an apple pie. The love of a child saves her life. "That's fairy tale stuff," a character says in the film. But in Parton's Christmas? You, whoever you are, live happily ever after: safe and loved. And that's all the magic we need.

"Dolly Parton's Mountain Magic Christmas" is now streaming on Peacock. Watch a trailer via YouTube below: