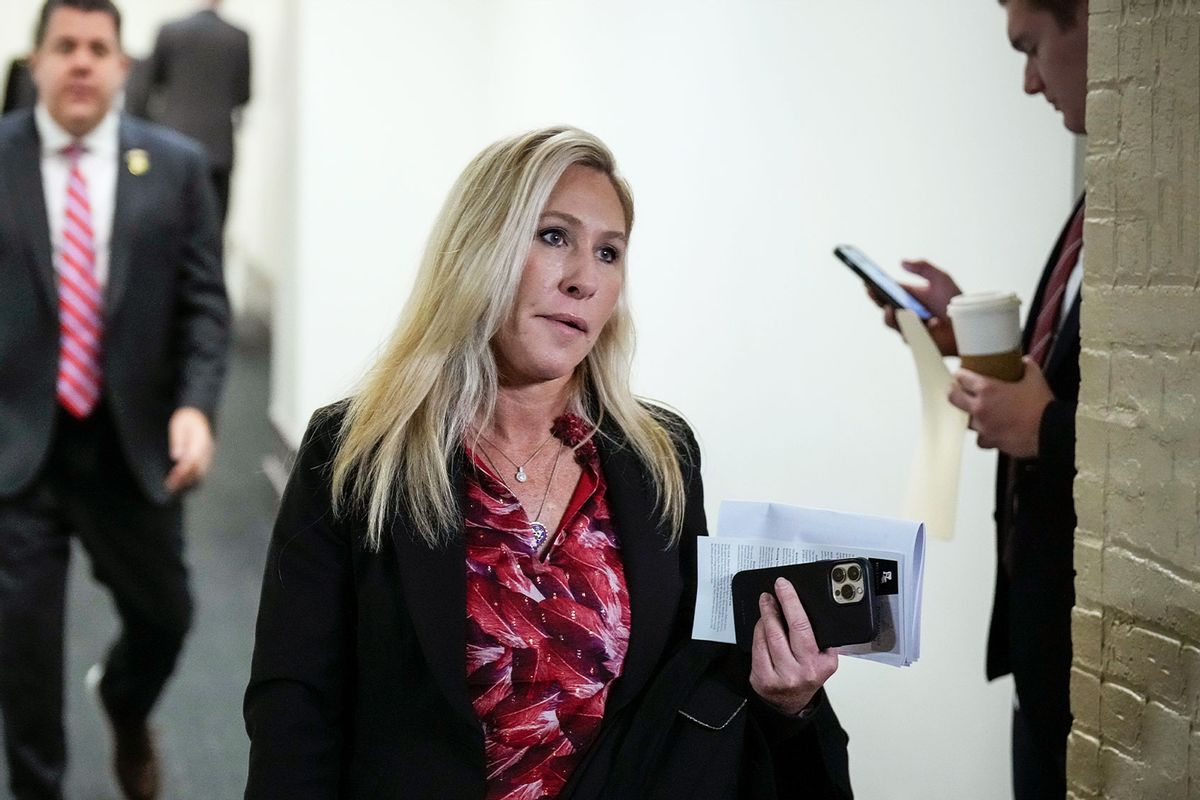 Still waters run deep, indeed. Rep. Marjorie Taylor Greene has been locked out of her Twitter account for copyright infringement, the Georgia lawmaker lamented on Tuesday to TMZ. The work in question? The song "Still D.R.E" by rapper and producer Dr. Dre, whose quick actions in response to Greene's co-opting of his music helped shut her account down.

Greene posted a video to her social media accounts shortly after Rep. Kevin McCarthy was elected as House Speaker following a lengthy and highly divisive process. In the nearly two-minute video, apparently intended as a sort of victory lap, Greene steps out of her office and walks through the halls of Congress in slow-motion, a satisfied expression on her face. The camera zooms in on her cowboy boots and her red coat. The clips of her walking are interspliced with news clips, in black and white, of the House Speaker proceedings and a close-up of Greene holding a phone with a call in-progress with someone listed as DT, theorized to be Donald Trump. The video also includes a tweet of Greene's and freezes on a selfie she took with McCarthy, which the newscaster says "may have been" McCarthy's "first act as Speaker."

Throughout the video, the distinctive beat of "Still D.R.E." plays, Greene's slo-mo steps timed to the percussive piano of the legendary song, featuring Snoop Dogg. Dre was not happy about it, nor consulted. In a statement, Dre said, as reported by the Los Angeles Times, "I don't license my music to politicians, especially someone as divisive and hateful as this one." On Monday, Dre's legal team sent a cease-and-desist letter to Greene, according to the Los Angeles Times, arguing that the politician's use of the song without permission "constitutes copyright infringement and that the rapper 'has not, and will never, grant [Greene] permission to broadcast or disseminate any of his music.'"

This is far from the first time conservative politicians have stolen the work of musicians who don't share their views. In 2015, Trump announced his run for the presidency set to the tune of Neil Young's "Rockin' in the Free World." Young wasn't having it. Neither was Bruce Springsteen when his "Born in the U.S.A" was used by Ronald Regan, or Survivor, who sued when Newt Gingrich utilized "Eye of the Tiger" as his walk-on music.

Like Dre, Tom Petty sent a cease-and-desist letter to George W. Bush for unauthorized use of "I Won't Back Down" and to Michele Bachmann for using "American Girl." Greene needs to understand, it's "still Dre."