What do you expect when you hire a bunch of hip-hop artists, whose very music is steeped in protest? 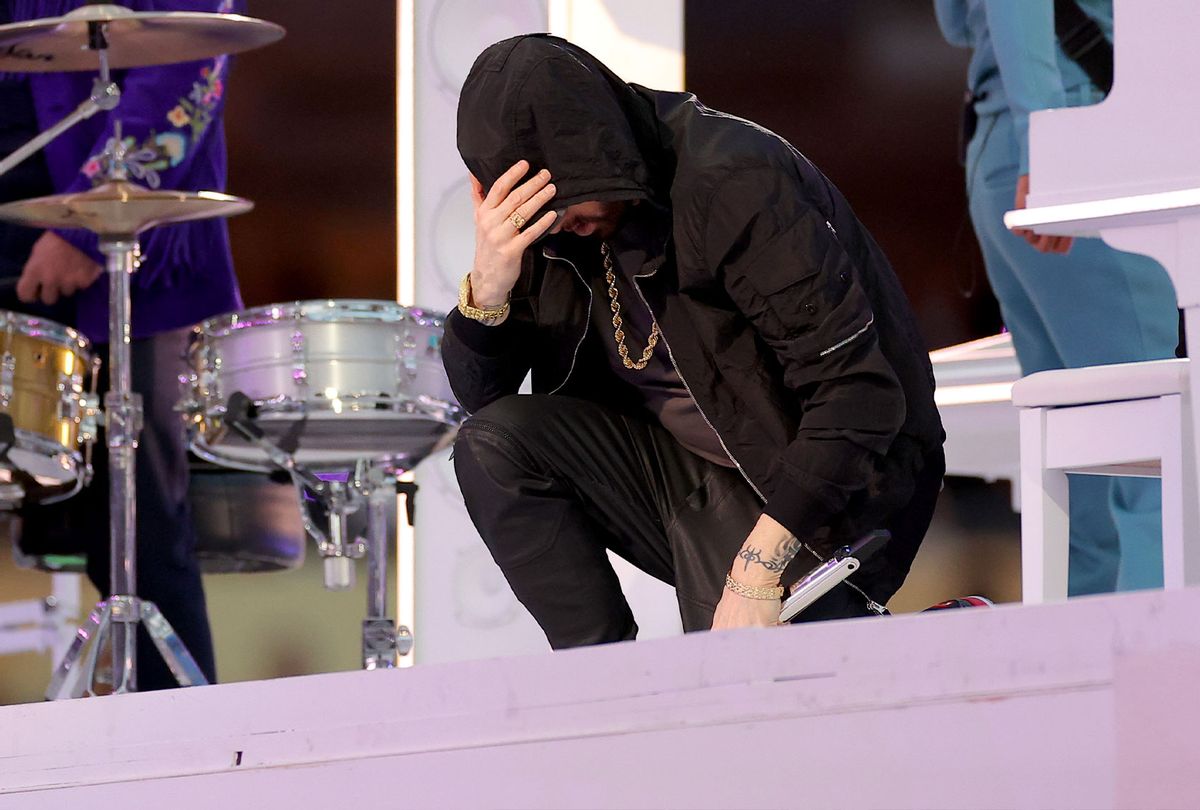 From nostalgic throwbacks to a high-energy set list, this year's goosebump-inducing Super Bowl halftime show lived up to its hype and delivered more than anticipated. But the biggest highlight was the star-studded lineup — Dr. Dre, Snoop Dogg, 50 Cent, Mary J. Blige, Kendrick Lamar and Eminem — who refused to heed guidelines about what they could or couldn't do on stage.

A few hours before Sunday's game, Puck News reported that the NFL had denied Dr. Dre's request to take a knee – the gesture of protest against racial injustice and police brutality that was popularized by former San Francisco 49ers quarterback Colin Kaepernick  – during his performance.

While Dre reluctantly complied, Eminem did not. Prior to his performance, the NFL had also advised the rapper not to take a knee. They had good reason to think he would. Eminem had previously expressed solidarity with the cause, once honoring Kaepernick's efforts in a freesteyle rap during the BET Hip Hop Awards and later, including Kaepernick in the lyrics of his 2017 song "Untouchable."

Sure enough, after performing his 2002 Oscar-winning hit "Lose Yourself," Eminem dropped to his knee for several minutes while Dre played piano in the background.

No wonder Candace Owens faced backlash for supporting the show's "undeniable hip-hop and R&B excellence." Hip-hop has a history of protest; that is part of its excellence. It's likely one of the reasons why rap hasn't been the central feature of halftime before.

Of course, kneeling wasn't the only aspect of the halftime show that the NFL tried to control. The Daily Mail reports that the NFL also attempted to "disgustingly censor" some of the more outspoken lyrics in Dr. Dre's songs, going back and forth on content for weeks.

In particuar, they objected to the line, "Still f**king with the beats, still not loving police," in his 1999 hit single "Still D.R.E." They ordered him to omit the anti-cop lyrics, but Dre, who reportedly contributed more than half of the show's total budget, took his shot. He unapologetically rapped the lyrics while sharing the stage with Snoop Dogg.

The latest Super Bowl halftime show follows in the footsteps of previous shows that have been used to make a statement. In 2016, Beyonce, performed her hit single "Formation" among a swarm of dancers wearing Black Panther berets to protest police brutality. The following year, Lady Gaga became the first Super Bowl performer to reference the LGBT community with a riveting show masked as a middle finger to Trump. Although Mark Quenzel — the senior vice president of programming and production for the NFL — said that he didn't discourage Gaga to not discuss politics, a statement from Billboard revealed that Quenzel described the Super Bowl as "a unifying day for people" and claimed that "anything that detracts from that is not something that we should be focusing on." In 2020, the last major halftime show before the onset of the pandemic, headliners Shakira and J.Lo also delivered an unforgettable performance that celebrated the Latinx diaspora and sided with immigrants.