In an interview with Salon, journalist Vanessa Grigoriadis tells of the people behind the "sex cult" 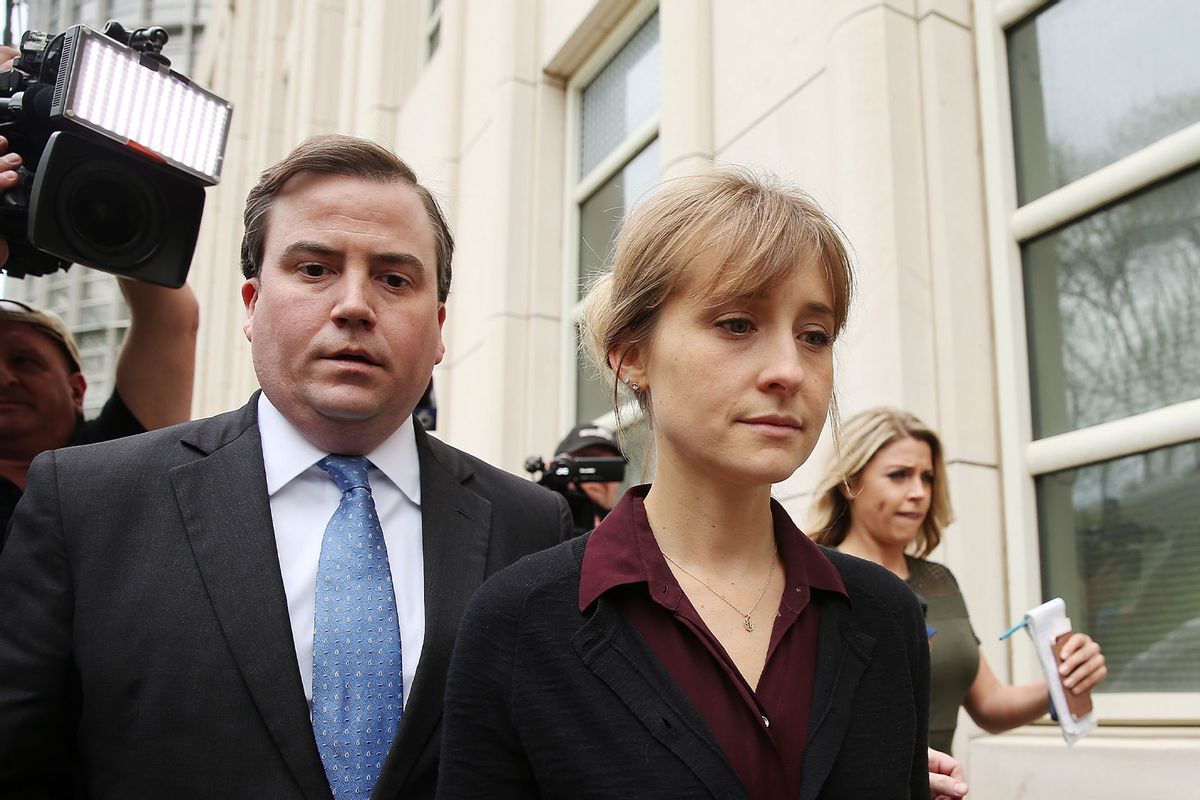 Actress Allison Mack (R) departs the United States Eastern District Court after a bail hearing in relation to the sex trafficking charges filed against her on May 4, 2018 in the Brooklyn borough of New York City. (Jemal Countess/Getty Images)
--

A few years ago, Vanessa Grigoriadis started to tell the story of a lifetime. That story would take her to a suburb north of Albany, New York, and to a mysterious location in Mexico. That story would put her in front of people from Clare Bronfman, heir to the Seagram's fortune, to "Smallville" actor Allison Mack. All in pursuit of the tale of NXIVM, a group first founded as a (now defunct) corporation by Keith Raniere, which peddled personal development courses and videos for a price.

Starting as a multi-level marketing company, NXIVM offered seminars like the "Executive Success Programs," and eventually had an estimated 16,000 members. Women within the organization were used to recruit more women for secretive groups inside the group, which used coercive techniques including threats and blackmail. Women were branded and sexually assaulted.

Grigoriadis was selected by the group to tell their story. As such, she was given unparalleled access to their headquarters, to members and to the group's leader himself, Raniere. Grigoriadis reported her findings in a series of high-profile, long-form articles for The New York Times Magazine and Vanity Fair.

Now, Grigoriadis is telling the story in a new miniseries for "Infamous," her podcast with fellow journalist Gabriel Sherman. The five-episode series includes exclusive interviews with Raniere, Bronfman and Mack. For her involvement, Mack was sentenced to three years in prison and three years of probation, after pleading guilty to racketeering and other charges. Bronfman was sentenced to almost seven years in prison, more than the recommended sentence, and Raniere is serving a sentence of 120 years after his conviction on charges including federal sex trafficking and procession of child pornography.

Salon talked with Grigoriadis about NXIVM, what makes it a cult, and why some of its most famous members, like Mack, might have joined the group now commonly known as a "sex cult."

I had not known much about it until 2017 when a male colleague of mine called me and said that NXIVM was interested in talking to a magazine reporter for a long piece. And he had talked to them fairly extensively, and felt that it was more likely a woman should do the story.

How would you describe the cult?

"People always want to be part of a group that seems like it has people in it who they imagine themselves to be like."

They were based in Albany, in New York. They were relatively small, considering how much money was floating around, and how many prominent people or sons and daughters of prominent people were in the group. In "Infamous," I talk a lot about how I wasn't sure what to think of them at first. But as I got to know them better and better — what first I thought was: I don't want to call them a cult unless I'm sure. I want to make sure that I'm not applying that label too indiscriminately. As I got to know them, I started thinking of it almost as like a cookie cutter cult. It uses so many tactics that are just usual cult tactics. It's sort of extraordinary. And people have talked about how there's maybe not that much in NXIVM that's actually new [but] a lot of "cut 'n paste" from another cult.

Can you talk about what some of those tactics were?

The classes. People in all the coverage of NXIVM sometimes lost that these many hours long classes were a large part of people's day-to-day lives in the cult, taking seminar classes. And as we know from large group awareness training, which is what they're called, over time, putting a group of people for days on end in the same room talking about their problems, and how do we frame their problems for like 12 to 14 hours a day, can be a cult tactic. It's really about aligning people to a new reality, a new discourse . . . I think they did that. The control over eating is another really clear cult tactic. The way that they describe the war between good and evil, that there are some people who are just irredeemable, and they've taken the fall, as they like to say.

You mention the phrase "prominent daughters." So many women we would consider "strong" or having a lot of privilege became a part of NXIVM. What do you think the appeal was for them?

I struggle with some of that, even today. I mean, I think there are a lot of tactics that NXIVM was using that just everybody is susceptible to. But I also think that "like follows like" in our world, and people always want to be part of a group that seems like it has people in it who they imagine themselves to be like. And I think having prominent actresses, and having the sisters who are the heirs to the Seagram's fortune, it gave NXIVM this sheen of respectability and this sense that you were in the in-crowd. I think that helped them draw in a lot of people.

Being the person who was chosen by the group to tell the story of NXIVM and getting all the access that you did, what was that like? Were there ever times that you feared for your safety?

I didn't fear for my safety. I do think that a couple of weird things happened that were a step up from phishing emails that I thought were connected to them, ways of them trying to figure out what I was doing that were strange. I didn't feel they were going to physically attack me. I thought that if there was a way they could have broken into my computer, they potentially could have been trying to do that.

Keith Raniere "was like Oz; he was so unimpressive."

And you met Keith Raniere in person. Can you describe that experience?

I mean, by the time I met with Keith, I had met with a lot of the inner circle beforehand . . . Part of the reason to position him as Oz was because he was like Oz; he was so unimpressive. And I think everybody has this question who has watched any documentary or listened to any NXIVM podcast, which is: How did these people follow Keith? When you see old videos of David Koresh, people can sort of understand the charisma. But Keith was anti-charismatic.

It made me more convinced that everything in NXIVM was an illusion. This guy was the leader?

It really is like Oz, "pay no attention to the man behind the curtain." One of the prominent people in the group you met was actor Allison Mack. Why did she say that she had joined?

She said that she was a seeker. And she was a person who had been trying to find the meaning of life. She had come across NXIVM and felt that this was what she was looking for. And then she felt also her passion for acting had fizzled, and that she wanted Keith to help her, make her a great actress again, that Keith had the tools to help her achieve that goal.

Have you heard from any of the people within the group you spoke to, since you started reporting?

No, I haven't heard from them. People who are incarcerated, no.

Are there still more stories to tell of NXIVM? Is the group still operating on some level?

I'm sure there are more stories to tell. There are tons of people who haven't told their stories publicly. I don't know if they'll ever choose to do that. I'm not sure of your last question. I think they're not truly operating, but there's certainly a group of people in New York who are in the second season of "The Vow" who have remained loyal to Keith.

"Infamous" is a podcast produced by Campside Media and Sony Music Entertainment. Listen to the episodes via Apple Podcasts.