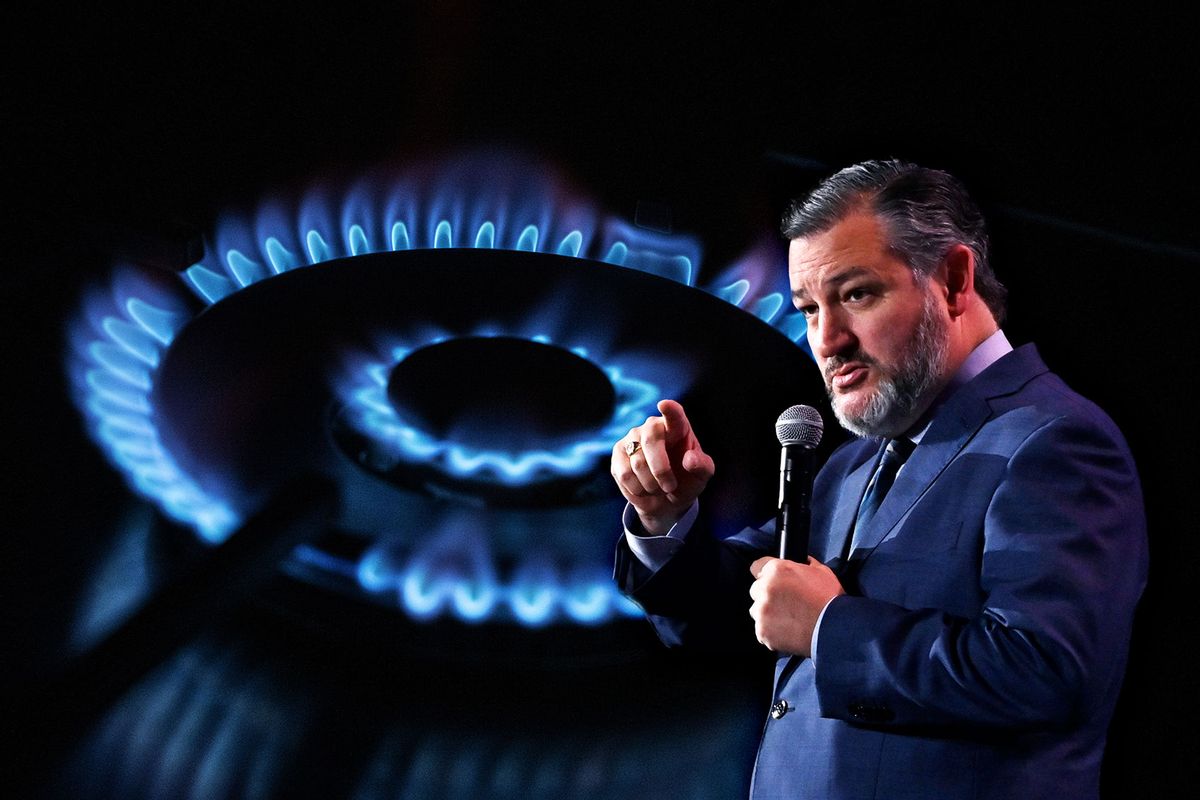 Desperate, as usual, to talk about anything but their actual policies — much less their party's widespread corruption — Republicans spent MLK weekend pretending they believe gas stoves are in imminent danger of being banned, and also that they care. As many reporters carefully documented, the impetus behind this massive bout of feigned outrage was a comment from an official at the Consumer Product Safety Commission about the future possibility of a slow phase-out of gas stoves that would likely take decades, in response to reports that the stoves are linked to respiratory illness, especially in children. Within minutes, this banal story about a non-existent ban was turned into a lie about President Joe Biden kicking in your door to steal your precious gas stove.

"If the maniacs in the White House come for my stove, they can pry it from my cold dead hands," Rep. Ronny Jackson, R-Tex., tweeted. Sen. Ted Cruz, R-Tex. — essentially a chatbot that churns out culture war nonsense — falsely accused Democratic of being hypocrites for having gas stoves they never said they intended to ban. Gov. Ron DeSantis, R-Fla., tweeted out a stove-based Gadsen flag, declaring, "don't mess with gas stoves!" So on and so forth. Very predictable and very, very dumb.

There have been many thoughtful responses to this faux hysteria, carefully detailing how massive a lie it is, how no one is banning gas stoves, and how Republicans gin up these pretend panics to avoid talking about real issues. "Everything becomes identity politics," Alex Shephard writes for The New Republic. "The right has long since stopped trying to come up with solutions to problems like climate change."

All good and true, of course, but frankly, I couldn't even get that far, because I was laughing too hard at these ridiculous Republican men pretending they could even tell you what kind of stove they have in their homes, much less give nuanced opinions on culinary techniques. Right up until last week, it was a standard view on the right that the only testicle-preserving foods to consume are deep-fried, and that being a foodie automatically makes you queer and/or a woman. This is the party that screams vitriol at the mere mention of kale and obsessively dunked on President Barack Obama for even acknowledging the existence of arugula or Dijon mustard. Who coined the term "latte liberal." This is the party of Donald Trump, who made a point of bragging about how he subsisted on takeout burgers, implying all other food consumption is emasculating. They've even alienated themselves from the supposedly masculine art of grilling to the point where disgraced former congressman Madison Cawthorne of North Carolina failed to convincingly sear a burger. As I was reminded on Twitter, Cruz famously lived on canned soup.

At least when Donald Trump complains that new toilets don't flush hard enough, you fully believe he has direct experience with pipe-clogging personal body functions, due to all the Burger King. But no one is mistaking people who spend real money on "Trump Steaks" with folks who can tell the subtle difference between gas and electric stove cooking.

An environmental health professor explains the fracas over gas stoves

Sure enough, it didn't take long for Twitter sleuths to uncover that one of the loudest self-proclaimed gas stove fans actually has an electric stove in his house.

As journalist Jared Holt pointed out in his excellent write-up of this pseudo-controversy, "most of the nation's gas stoves are installed in states firmly held by the Democratic Party." Indeed, the deep dive on this by Liam Denning at Bloomberg really outlines the link between gas stoves and liberal politics, as two-thirds of gas stoves sit in states where Biden won.

None of which should be surprising. Going back to at least the 1980s, the talk about the "wine and cheese set" linked  refined palates and liberalism as a political trope. That's intensified in the past couple of decades, with trends like organic food and Michael Pollen-style food writing that cements the foodie identity into the larger liberal one. In the world of food pop culture, the left loved Anthony Bourdain's horizon-broadening travel program, whereas the right got N-word-using Paula Deen deep-frying butter. It's unclear if you're even allowed to register as a Democrat anymore if you don't have strong opinions about the latest season of "The Great British Baking Show."

The partisan polarization of food has led to a punishing attitude toward dietary curiosity in red state America. I saw this myself a few months ago, when a Republican relative of mine, whose doctor told her to eat much less meat, asked me for some vegetarian recipes. She liked one so much she made the mistake of posting about it on Facebook. Despite it being a relatively simple recipe for black bean burgers, the novelty of it was enough to garner a pile-on from her so-called friends, shaming her with "ew" and the throw-up emoji.

The whole thing disturbed me. No doubt these folks call themselves "freedom-loving," but their hostility to both freedom and pleasure was such that they couldn't let this woman enjoy a meal that's only slightly different from the steak-and-potatoes dinner of tribal loyalty. But really, no surprise. The food-shaming is rooted in the same anti-joy impulse that is driving the attacks on drag shows, the efforts to ban books and restrictions on reproductive rights that allow people to have sex for fun.

Republicans do face a real conundrum. On one hand, conservatism is fundamentally a puritanical ideology. On the other hand, being a bunch of joy-killers tends to be unpopular. So they're always looking for chances to flip the script, to pretend that it's the left that is out to destroy your good time. So we get these fake culture war controversies in which the right pretends to be under assault by a "nanny state."

Of course, when you look past all the hand-waving about "freedom,"  it becomes clear that very little of what they wish to protect is actually fun at all. Indoor smoking, being a Nazi on Twitter, and dying of COVID-19 because you wouldn't get vaccinated are all technically freedoms, but only in the most pathetic sense. They don't resemble the actual freedoms most people want, such as the right to read what you want or have sex the way you like, which are under assault from Republicans.

That's why, even though he doesn't actually have a gas stove, there was one slender bit of honesty in the popular conservative blogger Catturd tweeting that he "turned on all my gas stove eyes today and let them burn for no reason." It was clearly beyond his limited imagination to picture a gas stove being used for a genuinely gratifying purpose, such as cooking food that tastes good. All he can think to do is use this appliance to taunt others. It's an austere and ugly worldview, one that's so hostile to pleasure that the only joy to be found is in hoping you've made someone else cry. The same worldview, I suppose, leads one to only start caring about gas stoves only after finding out they are making people sick.

about Republicans and food