"Take my hand. Take my whole life, too": I gave my heart away at Elvis and Lisa Marie's house 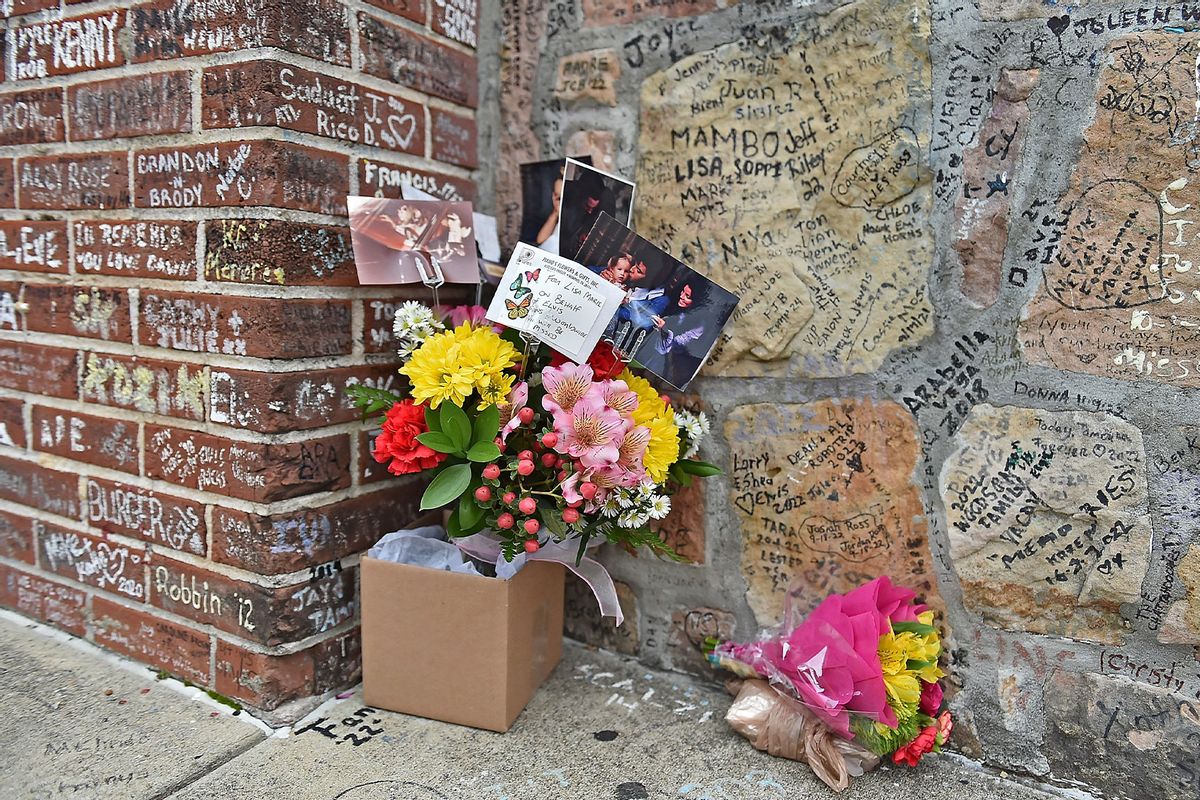 When you think of this world we live in as just a big rock, so much smaller in comparison to the vast dark space it bobs along in than we could ever truly fathom, it's wild to consider that everyone who's ever lived before us and everyone who will be born long after we're gone spends the totality of their days on that very same rock. The blue moon that Elvis Presley sang about in his rendition of Lorenz Hart and Richard Rodgers' 1934 classic is the same blue moon I look up at when I take my dog out one final time before bed each night. And the big yellow sun that shines into my bedroom window at the start of each day is the very same one that Lisa Marie Presley saw in the early hours of January 12, not knowing that it would be her last morning spent on this big rock, just like I won't know when it ends up being mine.

As someone who was born in the spring of 1977, mere months before Elvis died of cardiac arrest at the age of 42, same as his daughter would 46 years later, I've spent my whole life loving the memory of him although, in the grand scheme of things, we only breathed the same air for a very limited amount of time. Elvis has always seemed huge to me, as huge as space itself, and he occupies the same parts of my heart and mind that a father figure would, though I am now older than he ever got to be.

In Elvis' short life, he created a legacy that has spanned generations and will continue to do so, likely until the clock runs out on Earth itself. To me, he was the embodiment of what a cool guy should be. To others, he was a sex symbol or the ultimate example of artistic success. But he was only ever a father to one person, Lisa Marie, and now that she's gone too I find myself looking back at the Presley family that was, and is, both large and small in the same ways we all are. Flawed and fantastic in the ways we all have the inherent ability to be.

It makes sense, sitting with these thoughts now, why I would have chosen to spend one of the most impactful days of my life at the place Elvis and Lisa Marie once called home, Graceland. The place where they will get to share what forever feels like, together, and where I began what I hope to be my forever with my wife, who I'd only been seeing for a month when I asked her to go steady at the foot of Elvis' grave in 2012.

I can't imagine that Elvis and I had much in common really. He was a momma's boy from Tupelo, Mississippi, who grew up to be one of the most iconic performers to ever live. I'm a bookish lesbian from Chicago who once took a flying leap at my mother in the living room of my childhood home during an argument, and who grew up to write hateful things about her for the internet, professionally. But I get the sense that Elvis and I both shared a flair for the dramatic.

When I'm in love it's far from casual. I want first kisses in historical places. I want dreamscape anniversaries and international holidays. Most of what I envision for the romantic interludes I hope to one day dream into reality is above my pay grade, but in 2012 I was able to scrape together enough money to join my favorite person on a trip to Memphis to celebrate her 30th birthday. Living in New York at the time, it wasn't a huge excursion to get to Tennessee, sure, but I had big plans for when we got there. 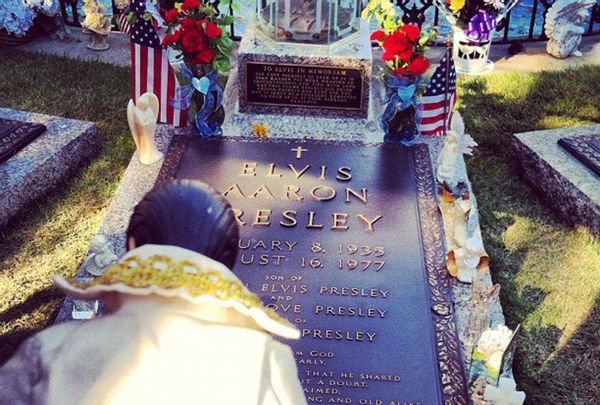 Elvis Presley's final resting place at Graceland (Lindsey Baker)Although homophobic Republican squares would view my life as untraditional, I am very old-fashioned in many ways when it comes to relationships. As I see it, you're not in a relationship with someone until you've "had the talk." So even though I'd been spending night and day with this person for a month, I wanted to make it official by verbally asking the big question "Will you be my girlfriend?" And once I purchased my ticket for our trip, where we'd be spending a long weekend in a hotel down the street from Graceland, I knew exactly where I wanted this moment to take place.

When our plane landed in Memphis we took a cab to the hotel, got settled, and spent the first day of our trip wandering around by foot because we couldn't afford to rent a car or take a lot of taxis. Memphis isn't really a walkable city, so we put in a lot of miles. And, for some reason, the restaurants there didn't really encourage the drinking of water, so we were dehydrated more than I could ever recall being prior. So much salt. So much beer. One meal, the clearest in my memory, consisted of 17 strips of fried catfish.

My not quite but soon-to-be girlfriend, who is now my wife of eight years, brought a prop for the trip, a gold jumpsuit-era Elvis doll she'd had since she was little, and we brought it with us everywhere we went on the trip. This didn't seem to raise any eyebrows, possibly because locals have seen it all when it comes to Elvis, or maybe they saw past the doll and fixated on the gay of it all.

Our actual tour of Graceland was scheduled for the second day of the trip, the grand finale. I woke up nervous, but had to do my best to hide it because, why would I be nervous? As far as my travel partner knew we were just going on a tour. But even aside from the big plan I was keeping secret, the day would have been charged with a little more electricity than usual because we were about to visit Elvis' house. The place that still smelled very much like fried food. The place where some even say his ghost haunts the top floor that no one is allowed to step foot on, still decorated as it was when he last rested his head there.

Elvis' actual house is smaller than you'd think and kinda gives off grandpa vibes with the overly carpeted rooms and hallways, and bric-a-brac strewed about. But it still feels monumental, like wandering through King Tut's tomb if King Tut happened to be a hoarder of television sets and police badges. In many ways, I found the stuff surrounding Elvis' house to be more interesting. We saw his planes, including the Lisa Marie. We saw the museums, with display after display of family photos from throughout the years in overly air-conditioned rooms where his music seeped in via hidden speakers. And at the end of the property, the meditation garden where Elvis's grave lies amidst his father's, his mother's, his grandson's, and now, his daughter's.

The walk up to Elvis' grave was quiet, even though we were surrounded by people. You could hear feet shuffling in grass, but that's about it. We looked down at it in silence, thinking our different thoughts about life and death and whatever else. She held up the Elvis doll for a picture. I asked the question. She said yes. Later, back in New York where we were confident the work would be good, we got matching TCB tattoos, both in remembrance of what took place there, and of Elvis himself and what he and his family meant to us individually. What a big and beautiful and precious life. Sometimes sad. Oftentimes not. For all of us.