Paul Ryan is happy to be Trump's lapdog 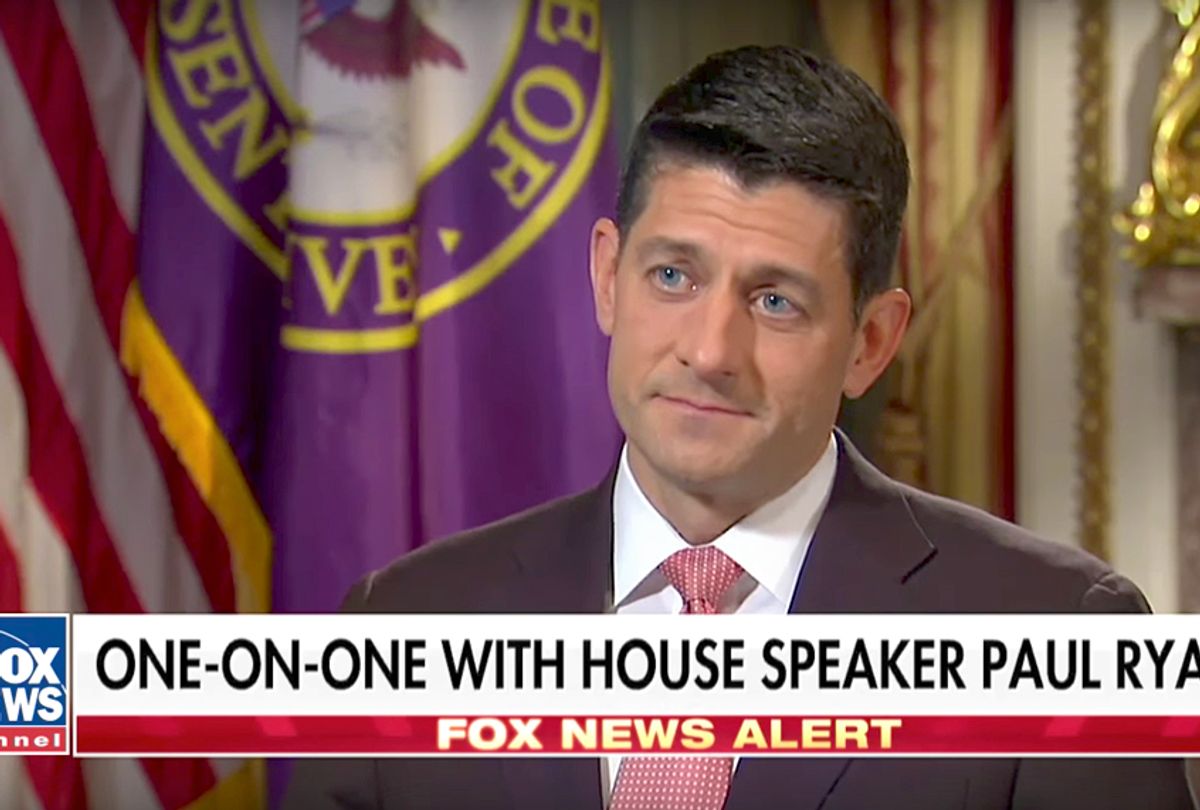 House Speaker Paul Ryan has long been a target of the Steve Bannon wing of the Republican Party, which helped propel Donald Trump to win the Republican nomination over 16 other contenders. Since then, the Wisconsin Republican has had to walk on eggshells, thanks to the president's frequent outbursts on sensitive subjects. On this, Ryan has not done well.

Ryan's day job has been keeping two distinctive factions of the GOP — the so-called moderate wing, which pretends to care about the poor and middle class; and the Trumpite-led Tea Party wing, which doesn't even bother pretending — together to try and pass meaningful legislation. On this front, he has not done well, either.

So Ryan, whose approval rating stood at an abysmal 16 percent in August and is facing a serious challenge from Democrat Randy Bryce, really needs a scapegoat right now. Fortunately, he's found one that Trump has also been after: The Senate.

Speaking to Sean Hannity Wednesday, Ryan gave a perfectly deflecting answer as to why Trump's agenda has failed to come to fruition: It is the upper chamber's fault.

Advertisement:
The key exchange can be found in this video snippet, where Hannity calls out by name Republicans who "don't want the president to succeed," as Ryan nervously clears his throat.

HANNITY: I know people that sit in Senate private, closed-door meetings, and they write me what's said. I'll give you names. Ben Sasse. John McCain — at least 10 or 12 senators that don't want the president to succeed. Republican senators that openly trash the president. What's your relationship —

RYAN: It's very good. It's the opposite of that. We have a great relationship.

HANNITY: Are you happy with his presidency?

HANNITY: Is there anything about his agenda that you think is not conservative?

RYAN: Not that I can think of.

HANNITY: Any big disagreement you have with him?

HANNITY: So really it comes down to the Senate. The Senate is where people need to focus their attention.

RYAN: Look, I love to bash the other guys. I can control what we can control, but we're doing our job here in the House. We're rooting for our friends in the Senate to get this stuff done. We're really disappointed in health care, but we still got a chance at getting a lot of these big things done.

A softball conversation with Sean Hannity is a welcome respite for Ryan. Joining Hannity to bash someone else is a far cry from last October, when the talk radio host called Ryan a "saboteur" who "needed to be called out and replaced." The building animosity culminated the day after Trump's election, when Hannity predicted that Ryan wouldn't be elected House speaker in January (he was).

It's good for Ryan that he and Trump can find a common enemy. The president has been targeting the Senate for a while. He repeatedly blamed the filibuster rule (which he praised in 2013!) for the Senate's inability to pass his health care bill — despite the fact that the so-called Trumpcare bill failed because it couldn't even get 50 votes, let alone the 60 votes needed to overcome a Democratic filibuster.

We will have the votes for Healthcare but not for the reconciliation deadline of Friday, after which we need 60. Get rid of Filibuster Rule! — Donald J. Trump (@realDonaldTrump) September 27, 2017

With the ridiculous Filibuster Rule in the Senate, Republicans need 60 votes to pass legislation, rather than 51. Can't get votes, END NOW!

If Senate Republicans don't get rid of the Filibuster Rule and go to a 51% majority, few bills will be passed. 8 Dems control the Senate!

If Republican Senate doesn't get rid of the Filibuster Rule & go to a simple majority, which the Dems would do, they are just wasting time! — Donald J. Trump (@realDonaldTrump) August 23, 2017

But is Ryan aware that the implied target here is his buddy Mitch McConnell, the similarly unpopular Senate majority leader, who is also caught in between a "moderate" wing that wouldn't vote for a complete repeal of Obamacare without a replacement and a radical wing that wants nothing less than to burn it all down?

Trump shouldn't be targeting the Senate for derision. They alone are the ones who delivered him the only real victory he can point to more than nine months into office: Supreme Court Justice Neil Gorsuch.

And Paul Ryan shouldn't be blaming the Senate either. If he ever keeps his position as House speaker, he will have to work with them — all of them — to pass the massive tax cuts he's worked his entire career to deliver. But for now, they're just someone else to take the blame.