From "alternative facts" to Pervatol, here are our most unforgettable small screen moments of the year that was 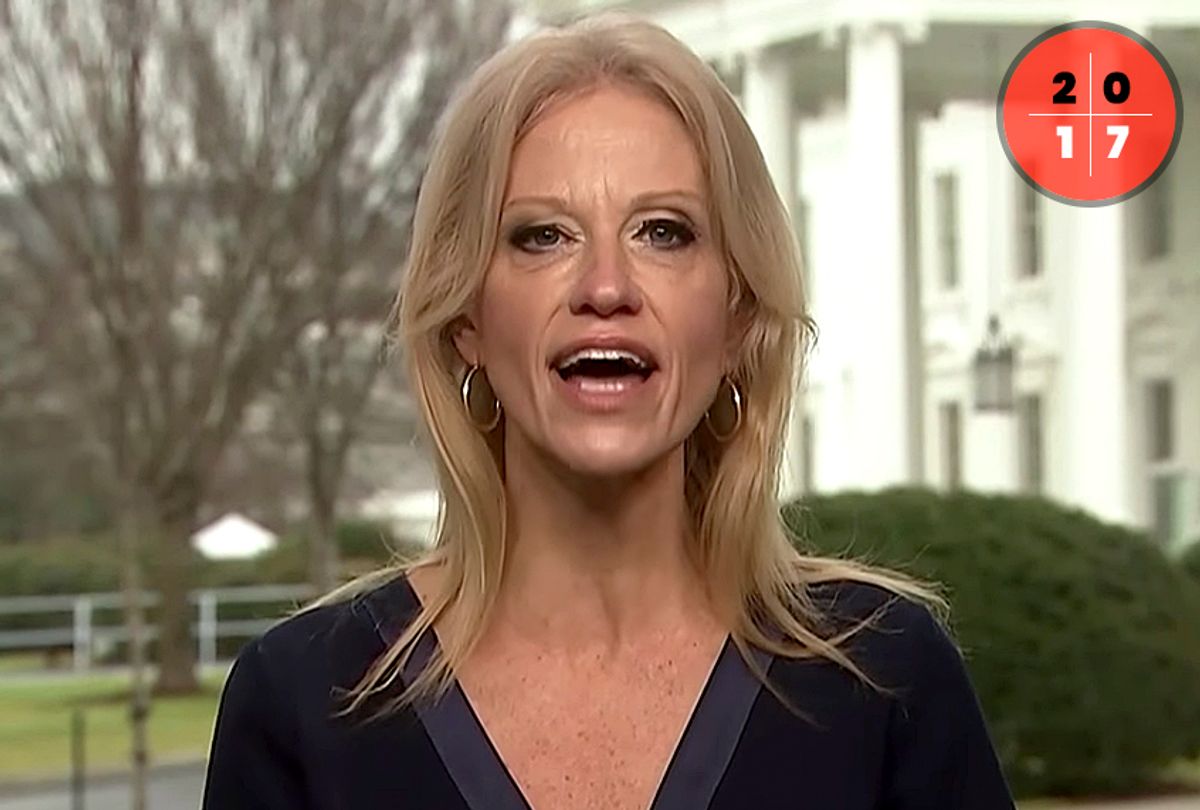 We can pull out best episodes of television, best performances within those episodes, or even compile lists of the given year’s top series. When ruminating upon the flaming manure pile that is 2017, it may be helpful to recall our TV experiences in a fashion similar to processing extended periods of stress. That is, we consider them moment by moment.

By definition, the majority of these flashes were fleeting. These ten flared brightly enough to burn a spot in the memory, establishing their significance as cultural signposts, or unique blips in time, by conveying a message with simple brilliance or, in the case of one entry, fabulous cruelty.

When this series debuted at the end of March, it quickly became a social media phenomenon, sparking debate as to whether the graphic depiction of 17-year-old Hannah (Katherine Langford) committing suicide was justifiable or irresponsible. The plot leading up to the scene in question is driven by her posthumous circulation of a series of cassette recordings, in which she provides 13 confessional accounts of the reasons she decided to kill herself.

In addition to inspiring heated arguments as to whether the series glamorizes suicidal ideation, “13 Reasons Why” reignited the age-old discussion about whether schools and parents should ban troubling and possibly irresponsible material or face it head-on. Adults have contended with this in various incarnations even before the dawn of the information age. Now the question becomes whether banning such content is even possible when TV series and movies are available on countless platforms, ensuring such things will be accessible to kids even if their parents and teachers don’t have them in plain sight — or even when they do.

“Moonlight” won best picture at the 2017 Academy Awards. If not for a gaffe involving the wrong card being placed in the Best Picture envelope, and a very confused Warren Beatty and Faye Dunaway in “let’s get on with the show” mode, the show may have paused and prevented “La La Land” from being initially announced as the top prize winner. In the insanity that followed, “Moonlight” received its due after the producers of “La La Land” spewed out their speeches which, unfortunately, left the producers of the actual winner in the awkward position of accepting the award after the runners up had already done so.

The whole event made for strange television and had viewers examining the goof for days afterward, which wasn’t ideal for the Oscars telecast producers or host Jimmy Kimmel, who had a great night until that very confusing moment. It was also an example of an underdog winning for once, and strange as it may seem, that counts as a feel-good story in 2017.

All told, Orlando Jones didn’t receive a lot of screen time in the first season of Bryan Fuller and Michael Green’s series. But his first appearance as Mr. Nancy, author Neil Gaiman’s version of the trickster god Anansi, left quite an impression by simply speaking the truth to his supplicants, captured men in a slave ship bound for America. One prays to Anansi for salvation; he instead tells them the truth: No matter what they do, he says, they’re f**ked. Not only that, their descendants born into this New World are also f**ked.

This does not please the faithful, but it does activate them to take matters into their own hands and address the pointlessness of any temporary deliverance a god might offer with effective, fiery rage. Like Mr. Nancy says: Angry gets s**t done.

January 22, 2017 was little more than 11 months ago, but if it feels like eons, that’s because it marked the official beginning of the post-truth, post-fact world currently threatening to unravel our democracy and our sanity. Donald Trump’s counselor, Kellyanne Conway, coined the term during an interview that wasn’t so much a collection of pivots as it was a marathon of verbal pirouetting, as Conway refused to answer Todd’s question as to why Sean Spicer massively inflated the crowd size for Trump’s inauguration in his first act as press secretary. Conway’s, um, inspired reframing of Spicer’s outright falsehood seemed patently ridiculous at the time. The problem is that Spicer was terrible at selling untruths. Sarah Huckabee Sanders, on the other hand, is such an oily pro at dispensing lies that watching White House correspondents question her is about as effective and satisfying as lobbing soft butter at a non-stick pan. Everything slides right off, and the world just keeping on frying.

“This video, it just broke me.” Trevor Noah’s Philando Castile monologues on “The Daily Show”

It took more than a year after his debut for “Daily Show” viewers to fully let go of Jon Stewart and allow Noah to find his own style and voice.  However, it was not until the world witnessed the acquittal of the officer who fatally shot Philando Castile in front of his girlfriend and child that Noah stepped into the late night host’s unspoken role of emotional filter.

Over the course of three nights, Noah directly addressed the shooting of Castile, a black man and a gun owner who, during the stop with police that ended his life, did everything correctly: He revealed to the officer that he was carrying a legally purchased firearm for which he had a permit. First Noah wondered aloud why the N.R.A. had remained silent about Castile’s shooting. On the second night, in a behind-the-scenes moment released online, he noted that in the six years he’s lived in the U.S., police have stopped him somewhere between eight and 10 times.

But it was the dash-cam footage of the traffic stop that cemented the powerful frustration and sorrow Noah and so many others felt about the outcome of the trial. “The Daily Show” played it in full, along with the video posted by Castile’s girlfriend, Diamond Reynolds, pointing out that even after witnessing the man she loved being shot dead, Reynolds still has the presence of mind to be deferential to the policeman. “In that moment, the cop has panicked,” Noah observes. “But clearly, black people never forget their training.”

Noah came into his own as a late-night host some time ago. But in those June telecasts, he made a visceral connection with his audience by speaking the truth with passion and authority. The audience did not applaud or laugh. This only confirms that Noah’s monologue hit its target.

More than two months after Harvey Weinstein’s outing as a sexual predator enabled by the entertainment industry, we’re still fielding new revelations about men in media, entertainment and politics abusing their power, and the women in their orbit. And in case you were wondering, this weeks-long bombarding with details of various assaults and misdeeds, though necessary, is draining.

Kudos to the women of “Saturday Night Live” and the writers on “Late Night with Seth Meyers” for finding ways to add levity to a situation that is no laughing matter. While the “Late Night” skit parodied a pharmaceutical ad for "the first sleep aid specifically designed for sexual predators," the “SNL” sketch features Saoirse Ronan, Cecily Strong, Kate McKinnon, Aidy Bryant, Leslie Jones and Melissa Villaseñor as pop singers cluing men in to the fact that life for women has always been Hell. “Oh,” Bryant purrs, “and this ain’t a girl group. We just travel in a pack for safety."

“This Is Us” and lessons on accepting and letting go, with its “Memphis” episode

“You deserve the beautiful life you made.” These are the parting words William (Ron Cephas Jones), a recovering drug addict and down-and-out musician, bestows upon Randall (Sterling K. Brown), the son he gave up at birth. Every episode of “This Is Us” can be relied upon to deliver at least one or two tearjerker moments. This one is no exception. But “Memphis” also completes the first season’s expertly rendered portrait of redemption through the story of a character type television has historically and lazily treated with an air of dismissal. Instead, its writers transform the William’s story, and the chapters he builds with his son at his life’s end, into an examination of human frailty. The message that culminates in "Memphis" is beautifully simple: None of us is immune to sorrow and beyond making mistakes, and all of us deserve second chances when life places them on our doorstep.

The reunion dance in “Book of Nora,” “The Leftovers”

Everything you just read about “Memphis” applies to the finale of “The Leftovers,” and then some. The HBO series’ last hour reconnects Nora and her long lost lover Kevin two decades after Nora quits him and makes a journey into an alternate reality. There, the departed two percent of the Earth’s population, including her lost husband and children, are happily getting on with their lives. Kevin feigns not knowing who Nora is, but eventually drops the façade, and they are tearfully reunited at a dance in the center of an Australian town, where they don't know the hosts but are welcomed nevertheless.

“The Leftovers” is nothing if not a quilt of questions about the nature of existence, but that slow dance between Nora and Kevin — first metaphorical, then, by the end of the episode, literal — simplifies the meaning of life down to a couple of concepts. First, the only fate is the one we create. And second, the goal of living is connection: to love someone or something madly enough to travel across time to be with them. There are other points, too, but for now these are the ones we needed to be reminded of.

“Tell Cersei it was me,” Olenna Tyrell’s parting shot on “Game of Thrones”

The Queen of Thorns was honest to a fault. This was her greatest charm and her ultimate undoing.

Cornered in her last moments, she remained regal, drank her death without hesitation and delivered her own coup de grace, revealing her role as the mastermind of Joffrey Baratheon’s death . . . and shattering Jaime Lannister’s heart in the process. In that moment, Jaime realized his part in allowing false accusations against his brother Tyrion to stand, a decision that lead to his father’s killing, Tyrion’s banishment and, as Jaime would soon discover, the arrival of dragons into his lands. The ultimate last word is one for which there is no comeback. Olenna served hers cold.

The past year reads like a horror anthology of the mindlessness women have to contend with, featuring tales ranging from the mildly traumatic to scarring. But it’s also dawned on many people, male and female alike, how common it is for even well-meaning men to make idiotic assumptions about how the women in their lives feel about them.

The “Blackout” episode of “Better Things” sums up this frustration in one very short word, delivered many times in succession when Pamela Adlon’s character Sam reacts to her friend Jeff’s misguided attempt to turn a tender platonic moment to his advantage. But as 2017 closes, I think it’s safe to say that Sam speaks for many of us when she delivers her definitive response, seen in this clip.