The best show you're not watching is the UK import "Inside No. 9"

This is brilliant, black-humored, taut format horror for people who enjoy the occasional potty-joke — very British 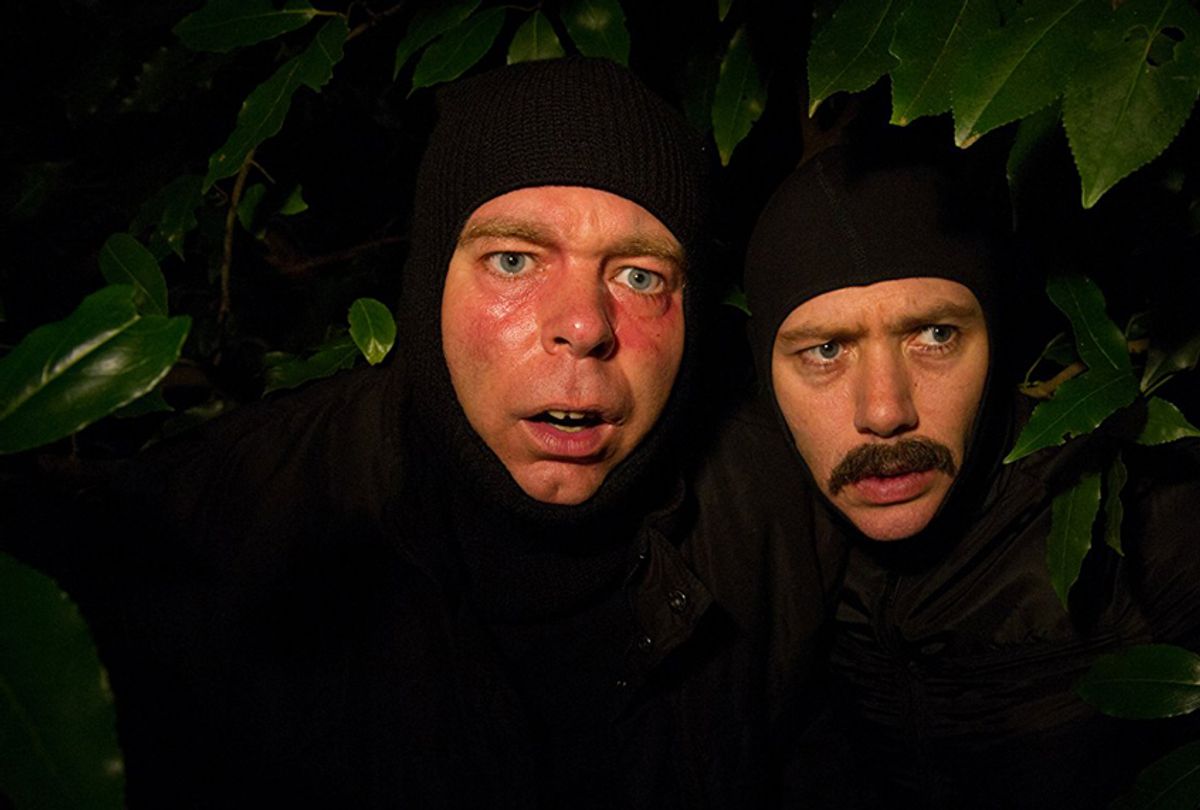 Steve Pemberton and Reece Shearsmith in "Inside No. 9" (BBC Two)
--

In much the same way that I came to sheet masks and avocado toast well behind the curve, I just discovered a four-year-old TV show. Holy crap, where have you been all my life, "Inside No. 9"?

"Peak TV" has already passed from being an observable phenomenon to simply, for many of us, a way of life. Netflix drops new original content at a pace that feels almost punishing. The number of streaming platforms now exceeds that of observable stars in the universe. Who can keep up? I admit, to my great shame, I'm only on season two of "Halt and Catch Fire" and that I just started watching "Schitt's Creek" this season. But I'm still baffled how a deliciously nasty British anthology series has flown under my radar for so long. It's the kind of thing that could get a person permanently banned from the "Black Mirror" fan club.

Launched in 2014 by "The League of Gentlemen's" Reece Shearsmith and Steve Pemberton, "Inside No. 9" is "Tales from the Darkside" by way of Agatha Christie, Monty Python and Quentin Tarantino. It also nods to the work of "In Bruges" and "Three Billboards Outside Ebbing, Missouri" writer and director Martin McDonagh, with its explosive cocktails of bumbling incompetents and inevitable violence. Each episode is a self-contained jaunt through often excruciating suspense, punctuated with bursts of humor and concluding with a twist that lands like an icepick in your heart. Ask yourself, was reading "The Lottery" a formative life experience? Then you'll be glad to know you can watch the first two seasons of this creepy little treat on Hulu and the first three on BritBox — you didn't have any plans for the weekend anyway, did you?

I am lifelong sucker for horror in compact form. A taut format feels exactly right — anything that shocks just long enough for you to hold your breath will do. As I child, I started on Edgar Allan Poe stories and swiftly moved on to the harder stuff — Stephen King. I discovered, via reruns, "The Twilight Zone," "The Outer Limits," "Night Gallery" and the masterful "Alfred Hitchcock Presents." Over the years, I've pledged my allegiance to all the Tales — " . . . from the Darkside," " . . . from the Crypt," " . . . of the Unexpected." I've hooked my kids on "Goosebumps" and "Are You Afraid of the Dark?" I feel about short-form horror the way I do about pizza — even when it's not great, I'm over-enthusiastic about it. Yet I still didn't know how much I needed to see Charlie Chaplin's great-granddaughter, "Game of Thrones" actress Oona Chaplin, delivering a gracefully comic, nerve jangling and completely silent performance until "Inside No. 9" delivered via the taut art theft episode "A Quiet Night In."

Unlike "Black Mirror," the pervasive theme of "Inside No. 9" is not "The future is going to spiritually ruin, and then straight up murder me." Instead, it often relies on more traditional plots of suspense and plans gone comedically, harrowingly wrong. Imagine a Hitchcock thriller but with farting as a key element, because they've done that.

The episodes unfold in a variety of novel ways. The chilling "Cold Comfort" is set at a crisis support line and develops via mock CCTV footage. "The Devil of Christmas" is a cheesy horror movie that becomes a director's commentary (voiced by Derek Jacobi) on a cheesy horror movie that becomes something else. A twisty, body-strewn episode from the current season — which ended this past winter — is told in reverse chronological order.  Other episodes have riffed on Shakespeare and the 17th-century witch trials. In short, it's fun.

Yet despite its effective use of stunts and surprises, "Inside No. 9" is not a show that depends on stunts and surprises. It features a revolving cast (except for regulars Steve Pemberton and Reece Shearsmith) and a fresh storyline every episode, yet consistently explores matters of love, grief, abuse and mental illness. The series standout "The 12 Days of Christine" strings you along like a classic ghost story, then swerves into something more devastating. Other episodes, like "Diddle Diddle Dumpling" and "Tom & Gerri," are similarly haunting psychological thrillers — like Michael Haneke movies without the meanness. Maybe only a British show could deliver such bold, black humor and still manage to not feel cynical. It's true that not all the jokes land and not every episode entirely satisfies, but I'd put the batting average above that of "Black Mirror," and say that the shocks almost always feel earned.

You don't have to be "This Is Us" to do emotional depth. For many of us, it's horror that is more often uniquely suited to guide us through the wallops that real life delivers. And "Inside No. 9," with its cavalcade of murderers, charlatans and madmen, may be the most heartfelt and heartbreaking show you haven't become obsessed with yet.