This is "Roseanne" on drugs: "Netflix & Pill" is a prime example of the revival's mistakes

Any questions? Lots. Given how the series handles other tough issues, its lack of depth on opioid crisis is not new 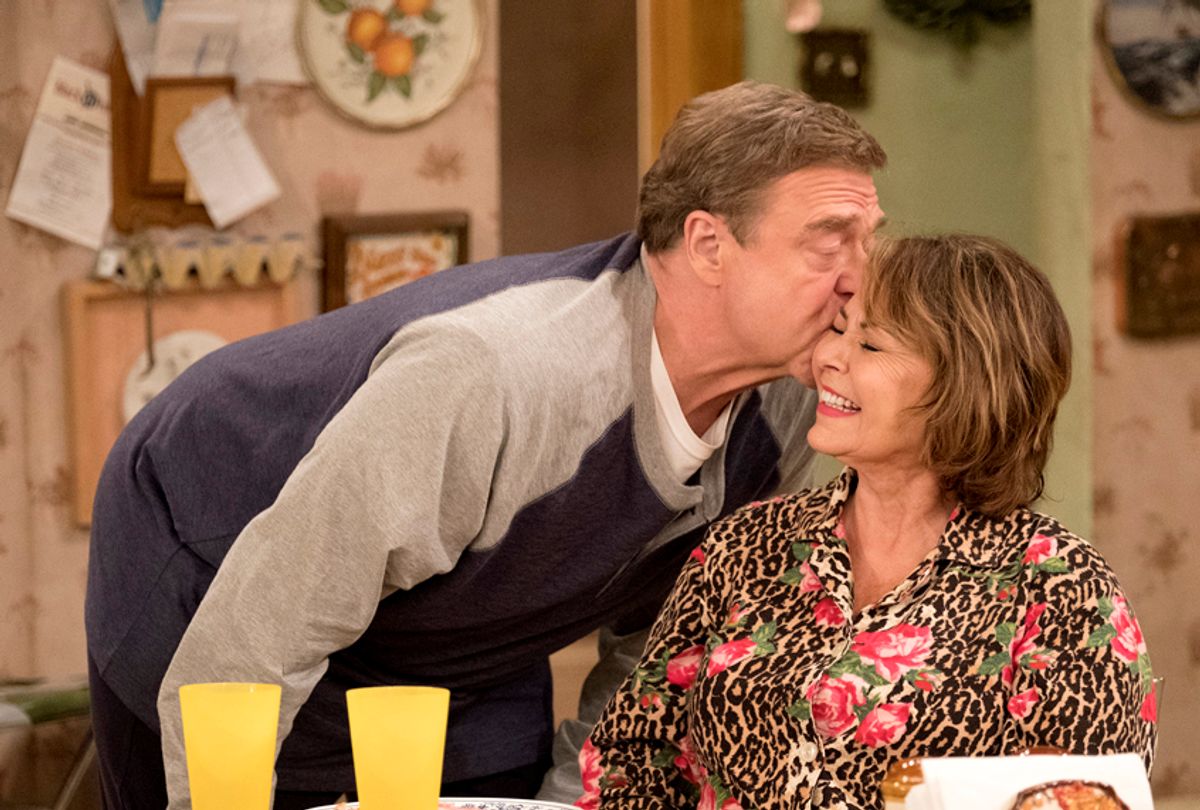 Few things would make me happier than if I were able to share definitely positive analysis about ABC’s “Roseanne.” Believe me. If we were simply served a revival of the “Roseanne” of yesteryear, a series that treated all of its subjects with true dignity and grappled with political and social topics deftly, and with a measure of pensiveness, I would have simple sung a few hosannas in its general direction and moved on to greener fields.

But with the debut of each new “Roseanne” episode, the flaws in the sitcoms central narrative grow simpler to verbalize. Tuesday’s episode, “Netflix & Pill,” finally brings the season’s overarching problem into the spotlight, finally explains why a character and a series that used to speak to the broadest swath of America instead contents itself with screaming at the choir and turning its back on so many folks lining the pews.

In that episode, we find out that this entire time Roseanne Conner (Roseanne Barr) has been struggling with a prescription pill addiction, a secret that slurs its way out during the Conners’ relatively modest 45th wedding anniversary celebration. At first Roseanne just seems overly amorous, playing spin the bottle with Dan (John Goodman), noshing on honey baked ham and laughing a little too hard and long at his inebriated jokes. Then she starts biting his leg and barking at him before letting it slip that she’s hidden pain pills around the house.

This would be a convenient point, I suppose, to attribute Roseanne Conner’s personality change to her being in a perpetually altered state. Anyone who knows an addict has had a few of those “that explains it!” moments. But the truth of it is the changes in Roseanne Conner circa 2018 have far less to do with her painkiller fix than the political and social paradigm shifts and general lunacy of Roseanne Barr herself.

But pill-popping isn’t an adequate explanation of why new “Roseanne” feels less kindly than old “Roseanne.” It’s just a symptom of it.

A more significant problem begging for amelioration in the comedy’s second season is an inability to follow through on the myriad tensions presented this season.

Only in the penultimate half-hour of Season 1 does a person realize that “Roseanne” isn’t simply a revival, it’s a throwback to the topical one (or two)-and-done episodes, resolved quickly and via facile execution.

One would think they would know better than attempting to take on so many political talking points within a single pass. They did not. So in its simplistic efforts to make the Conners the every-family of the American working class, the writers selected a limited array of screeching hot-button topics — the Muslims next door! Gender fluidity! Surrogacy! Political tribalism! — and dispense with them, swiftly and sanitarily, within the space of one or two 30 minute slots, glossing over other issues that are equally at the forefront of our national conversation. (Oh, Mary. We still barely know you, and the season is nearly done.)

The end product is that this entire season has amounted to one Very Special Episode after another.

That said, at least “Netflix & Pill” doesn’t drop the opioid crisis into the Conners’ house out of a blameless blue sky. Wisely Season 1 steadily builds to its grand reveal, camouflaging Roseanne’s substance abuse in a larger subplot about the Conners’ lack of access to affordable healthcare.

Starting with the season premiere Roseanne and Dan (John Goodman) vacillate between good-naturedly swapping prescription medications to dealing with Roseanne’s worsening knee pain. Never do we forget about her debilitating pain; indeed, the couple’s growing list of ailments and shrunken coverage under the government’s subsidized health care problem is as frequent a house guest as Jackie (Laurie Metcalf).

Living through such scarcity informs Dan’s admonishment of Darlene (Sara Gilbert) when she initially turns up her nose at the offer of a casino waitressing job that comes with full benefits. The only catch is that she’d have to dress up like an old-timey riverboat hooker.

Darlene eventually does a 180 degree turn for the sake of her kids just as Roseanne heads around the bend. Dan confronts his wife about her deception and substance abuse, agreeing to do whatever it takes to get her the surgery she needs to get better. The final scene of “Netflix & Pill” hints that letting go of her pharmaceutical crutch will not be so easy.

Planting the noxious weed of addiction within an iconic character is a bold move that speaks to the necessity of facing the menace of the national crisis without blinking. When you think about it, most TV series that weave addiction into their narratives do so via established addicts. The titular anchor on “Murphy Brown” is a recovering alcoholic from the first moment we meet her, as is Sam Malone on “Cheers.” The dirty secret of Jackie Peyton’s pill addiction is revealed in the credits sequence of “Nurse Jackie,” and both mother and daughter are recovering addicts on the fabulous CBS comedy “Mom.” We could go on and on.

Saddling Roseanne Conner with such an affliction speaks to the very real truth that this crisis can ensnare anyone at any time. It also demands to be dealt with realistically in the following episode, which happens to be the season finale. Sadly — obligatory spoiler alert (although I promise this reveal takes nothing away from that episode) — but the monkey on Roseanne’s back barely makes an appearance. As a side note in one scene, Dan pours Roseanne a glass of sparkling cider. That's pretty much the extent to which the show places a toe on Recovery Road.

Ergo, much in the way this season treats race like a hot potato, something white people acknowledge in passing but can’t honestly confront, the end of this “Roseanne” season asks the audience to acknowledge that Rosie’s pharmaceutical problem is a thing that happened. That box has now been checked, it’s handled and we’re moving on.

Admittedly I'm being a bit facetious here; “Roseanne” has been picked up for a 13-episode second season, and surely the writers are counting on that extension to wade more deeply into this difficult topic. Besides, no reasonable person would expect "Roseanne" to go out with its title character enduring the throes of a full “Patrick Melrose”-level detox and/or relapse, complete with the shakes, profuse sweating and that harmonica wail rippling in the background.

Nor am I suggesting that the Conners uproot from Lanford and move next door with the “Shameless” gang in Chicago so that Rosie can cavort through a blackout tour with Frank Gallagher. This is a network family comedy, after all.

Still, this reveal demands a little more of a temporary resolution than sparkling cider and affection. Denial is a normal starting line for families coping with addiction issues. This isn't even an example of that.

Having witnessed the show’s fumbled attempts to take on bias, and discrimination based on sexual orientation, trusting that these conversations will be dealt with more fully in the second season leaves me with serious concerns. It'll be back in a few months, mind you. In the real world that's enough time for a person in Roseanne's situation, heaven forbid, to overdose.

What these new “Roseanne” episodes have done well — portraying the humanity of the majority torn between polarizing social and political extremes — has played out via subplots devoted to Darlene and Dan, and two of these threads will flourish in the season finale. Goodman’s arc in particular allows the actor unleash Dan’s frustrations in a way that we haven’t yet witnessed, in a scene that caught my breath in my throat. Such potent glimpses of light and forward movement provide strong hints as to how the series could yet find its soul again.

Halting the script's clumsy soft-shoe through thorny topics would be a good start. As the Conner patriarch has done so nobly and without reward all season long, maybe the highest duty the series can fulfill as the nation’s conversational surrogate is to figure out how to sit with the snarl of complexities tangled up right in front of them, and show us how they slowly sort through the mess.