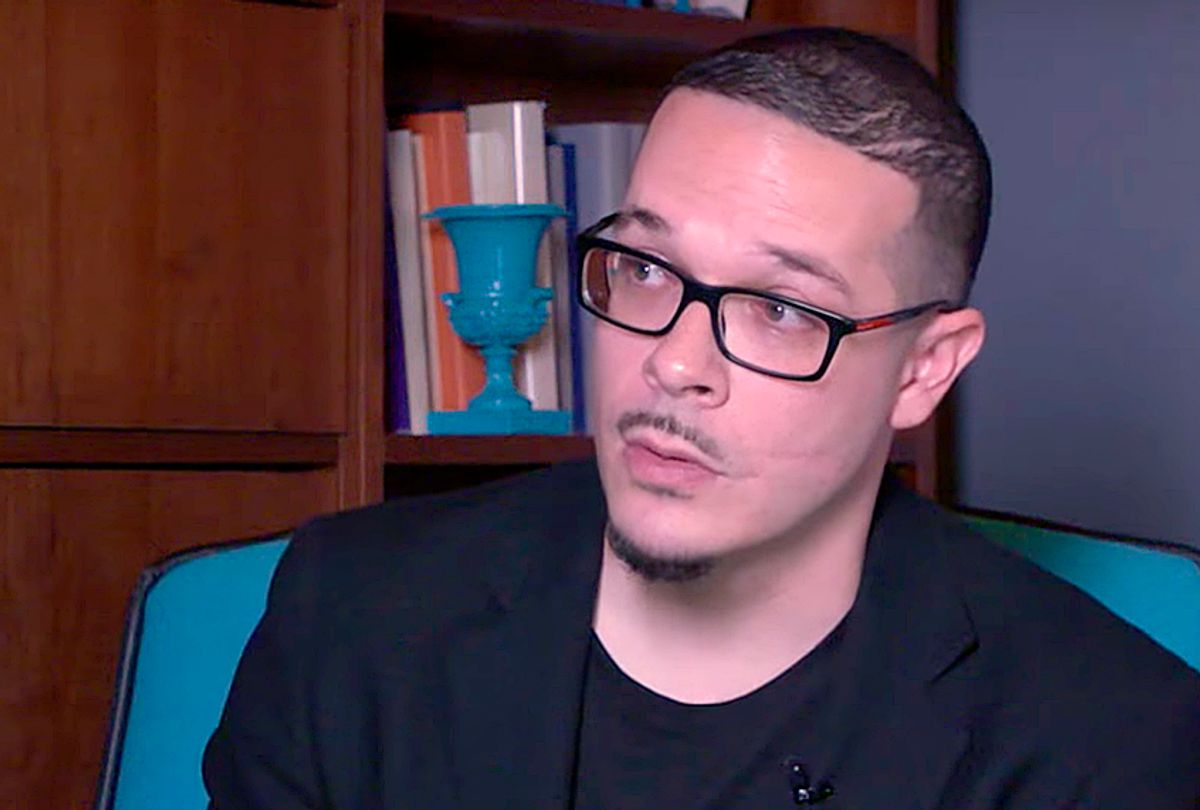 "It's been a completely crazy 48 hours," Shaun King declared in a video posted on Twitter Friday morning. The galvanizing civil rights activist and Intercept columnist is no stranger to crazy timelines. Since his rise to prominence as an outspoken figure in the Black Lives Matter movement, he's been repeatedly subjected to conspiracy theories about his racial identity. He says he gets death threats so regularly that "When I leave my house my wife & kids regularly hug and kiss me like it could be the last time they see me." But this week has been different. On Wednesday, he took to social media to say, "Someone hateful has targeted my children tonight. The lowest moment of my life as a leader. Pray for us. We’re safe, but deeply humiliated."

In a series of tweets, King said that while getting ready for his daughter's musical performance that evening, a woman showed up downstairs at their building "to talk to you about childcare for your kids." He said the woman knew his children's names, that she "demanded" to see them because "she worked for New York Child Services (ACS) and that "a formal complaint had been filed that my wife and I had abandoned our children and allowed them to do drugs." King says he then was put in touch with the woman's supervisor, "who then said if I did not allow New York Child Services to interview my children that they were going to call the police." He then asserted that he was in no way going to permit this and that "an anonymous troll has weaponized New York’s Department of Child Services against my whole family by filing false reports of neglect and drug use by our children."

READ MORE: A bird trapped in ICE detention: What it's like inside the largest immigrant prison in the US

On Thursday, he updated the story to say that "New York Child Services now wants to interview each of our children, alone, without us in the room, because of a single report that they admit was anonymous." Then on Friday morning, King said in his video that NYU law school has taken on the case, which he expects to go on for a few months.

"It's clearly just an anonymous troll," he noted. "My wife and I go out of our way to take care of our kids…. What I've learned is that these systems are weaponized against everyday people every single day. People who don't have a million followers on Twitter… or a budget to hire an attorney."

King is accurate in that assessment. Reason points out this week that the American Journal of Public Health estimates that "37 percent of American kids will receive a visit from CPS… and if they're African American, the rate is 53 percent." And whomever is behind the call to Child Services on King, this year has already revealed the high prevalence of white people calling the authorities on people of color on the most specious of excuses. (Barbecue Becky begat Permit Patty begat Pool Patrol Paula, ad nauseam.)

But what King describes as the "weaponized" deployment of CPS is a particularly insidious practice, because just like family separation, it uses children as pawns in a vindictive game. Online legal and parenting forums are full of posts from terrified parents caught in bitter custody battles who claim their exes have used CPS against them. "I know people that are afraid to answer their doorbell because they are scared it will be CPS over some bs," writes one woman in a discussion group. "Ex has now filed 5 claims with CPS that have all come back unsubstantiated," writes a man in another. "She continues to tell me that she will file more."

Similarly, over the past several years, there has been a deluge of high profile news stories involving bystanders calling the cops on parents for letting their children go to the park unattended or walk home alone in daylight. When I wrote a story several years ago about allowing my then 10-year-old to be alone in the apartment for brief periods, I received threatening emails saying I was going to get a visit from CPS. Author Kim Brooks has written eloquently on her harrowing experience with the justice system after she left her child in her car for a few minutes on a mild, cool day.

Some of this eagerness to deploy the authorities may indeed come out of a legitimate — if sometimes misguided — concern for the welfare of kids. And of course there are situations where children are truly imperiled, where it is the obligation of the community to step in and investigate their circumstances. King and his family aren't arguing with any of this. In a Medium post this week, King's wife Rai wrote of her own experiences as an educator and mandated reporter, saying, "I respect the people who do this very difficult work, and would never want to do anything to undermine the systems our government has in place to protect vulnerable children." But, she added, "I hope I am not expected to submit my children to the emotional trauma of being questioned by agents of the government every time a white supremacist or random crazy person decides to make trouble."

The ease with which trolls can anonymously disrupt a person's life and family should be cause for alarm for anyone, but in particular any parent. Summoning CPS with no apparent just cause echoes doxxing, as well swatting, the practice of calling in a fake report with the intention of bringing in a SWAT team to the person's home. Last year, an unarmed Wichita father was killed by police after a California gamer made a prank 911 call to the Kansas police.

Nearly 30 states — including New York, where King and his family live — carry penalties for filing a false CPS report. Yet unfounded reports continue to be a handy leverage tool for domestic abusers or landlords looking to oust lower paying tenants, especially those who complain about deplorable living conditions. As The New York Times reported last year, "Some parents face a stark choice: leave their apartments or lose their kids."

Meanwhile, in New York, Children's Services has a track record that doesn't inspire the utmost confidence. In 2015, a report by Daniel A Medina in The Guardian exposed systemic problems within the city's Administration of Children’s Services that led to cases of children being taken from safe, stable homes and into precarious foster care situations. The report called the department a "bureaucracy that has at times abused its mandate." More troublingly, in 2016 The New York Post reported that over the course of a single three month period, "Ten kids died despite each being the subject of at least four abuse or maltreatment complaints to the city’s troubled child welfare agency."

The worst threat you could make to any parent is that their kids could be lost to them. It becomes even scarier when that threat comes with the implication that you will be held responsible for that loss. The details of the King story are still emerging, but all of us are vulnerable to what can happen to us, and to our children, if, as Rai King puts it, some "random crazy person decides to make trouble."

Trayvon Martin's parents say "We have a long way to go"

"Nobody is being held accountable"