America is married to the mob: But now the crime boss in the White House is feeling the heat

Forget all the arcane theories about Russian collusion. It's simpler than that: Donald Trump is a mobster 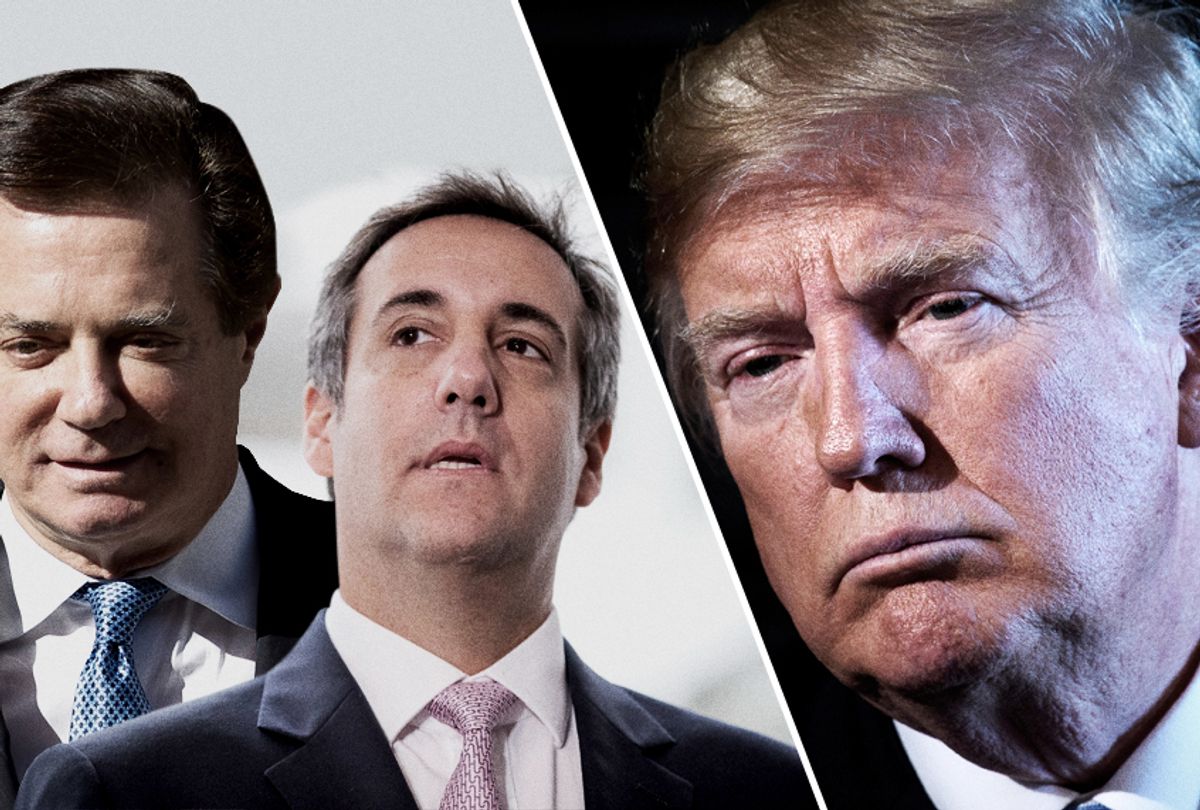 All sorts of melodramatic language has been deployed to describe Donald Trump’s presidency over the last couple of years: It’s a treasonous conspiracy to undermine American democracy and install a puppet regime controlled by our enemies; it’s a slow-motion fascist coup, seeking to undo civil rights and cultural diversity and institute a white-supremacist theocracy.

What if it was never anything quite so grandiose? Now that the Trump regime is beginning to crack and crumble — one piece at a time, and without the satisfying, cathartic crash so many people have longed for since the fall of 2016 — it looks a lot like something more familiar: a second-rate mob drama.

There’s nothing original about this metaphor, which quite likely isn’t even a metaphor. It’s been there all along: Pulitzer-winning reporter David Cay Johnston, who has followed Donald Trump’s career for four decades, has written extensively about Trump’s longtime connections to organized crime, as have numerous other journalists, including Salon's Heather Digby Parton. Those connections clearly go back to Trump’s early days of doing shifty deals in the bottomed-out market of 1970s Manhattan real estate, where the only way to build anything, buy anything or make anything happen was to work with the made men and their allies.

Investigative reporter Craig Unger’s new book "House of Trump, House of Putin," which does indeed allege a sinister relationship between the Russian president and our own (and endorses the theory that embarrassing sexual kompromat plays a role), largely traces the link through Trump’s byzantine business empire and his dealings with the Russian mob. Unger’s case is complicated and a lot of it is circumstantial; he believes, for example, that Trump was a person of interest to Russian intelligence clear back to the Soviet period. His contention that the Russian crime lords and oligarchs who began arriving in New York in the ‘80s used real estate in Trump Tower and other Trump properties as vehicles for money-laundering, and that this arrangement was more than mere coincidence or convenience, is pretty convincing.

Of course the mob-boss analogy exploded back into the headlines this week, after Paul Manafort’s conviction on eight charges of financial fraud (entirely unrelated to his work for Trump, in fairness) and Michael Cohen’s plea-bargain admission that he had orchestrated payments to the president’s alleged former lovers (or two of them, anyway), in a blatant end-around of campaign finance laws. As the New York Times observed in a front-page article — as usual, after everyone else had said the same thing — Trump’s embittered responses about who had been a “rat” and who hadn’t, and whether “flipping” to cooperate with prosecutors ought to be illegal, seemed straight out of the mobbed-up New York of 1980s Hollywood movies.

I can’t even say it was startling to encounter the president of the United States talking (or tweeting) like some goombah two notches below John Gotti holding forth in a Queens Boulevard diner. Can you? It should be obvious by now that this is a person with no perception of boundaries, so massively narcissistic that he either doesn’t notice or doesn’t care what people from the more respectable quadrants of society think of him. Indeed, Trump’s ability to shock the bourgeoisie — to use that term very loosely — is an important aspect of his supposed mass appeal. Just as his fans celebrate his shameless vulgarity, I think they also love his evident criminality, which may bespeak profound cynicism not just about politics but about human nature.

What I found amusing, and perhaps oddly revelatory, was that Trump felt the need to explain to Fox News viewers what the term “flipping” meant. Because there is literally no one in America — not the 86-year-old retired school-bus driver in North Dakota, not anyone — whose consciousness has not been shaped by endless hours of gangland dramas and police procedurals and zany mobster comedies produced since “The Godfather” was released in 1972. Everybody knows what flipping is, and everybody knows that’s what Michael Cohen just did to his former boss; the possibility had been discussed in the media for weeks beforehand.

But Trump has no idea what people know and don’t know, which strikes me as an important insight. His cultural references and his reality framework are decades out of date, which is probably why he’s so obsessed with violent crime (which in the real world is at historically low levels, especially in the city where he has lived his entire life). No matter what Trump says or what his devotees pretend to believe about him, he has virtually no contact with the lives of ordinary people, and perceives them only as hazy extras in a mid-century movie where he, of course, is the hero. Perhaps he understands them as innocents or rubes or marks or lovable pets — and those are the ones he claims to like! — although it’s not healthy to venture too far into speculative Trumpian psychology. But he presumes they know nothing about the stuff tough guys like him have to deal with, such as having your longtime personal attorney "flip" on you and "rat" you out.

The simpler way to say this is that Donald Trump is a mobster, and he’s been a mobster all his life. He’s sitting inside a vast palace of corruption, looking down at the peasants gathered at the gates. How should he know what non-mobsters think or believe? Why should he even be interested?

This isn’t an idle observation. It might be a key to understanding this strange moment in American history. I’ve devoted a lot of mental effort over the last couple of years to making sense of the “Donald Trump era,” suggesting that it inaugurated a new age of revolutionary chaos, or marked the next stage of what Jean Baudrillard called World War IV, the post-9/11 internal conflict within the Western world. I still believe those big-think questions have some salience, but in terms of the current specific situation in American politics, it might be a lot simpler than that. Maybe Trump is just a big old crook, and the lawmen are now hunting him in classic fashion, by following the money.

It’s worth noting that Robert Mueller and several members of his team have considerable experience in tracking and cracking both organized crime and white-collar crime (which are highly similar in structural terms, albeit with more broken bones and dead bodies attached to the former). They’ve been trying to find a way into the criminal edifice of the Trump empire, which is guarded by mist, shadows and dragons, and now they’ve got one: The blatantly stupid mishandling of some payoffs to old girlfriends, which probably happened that way because nobody involved even understood they were illegal. As Donald Trump undoubtedly knows, Al Capone was probably responsible for dozens of murders. He was never even charged with any of them, but wound up in federal prison for tax evasion.

Who, we might add, did Trump hire as his personal attorney, after jettisoning Cohen and John Dowd and Ty Cobb and whoever else? Rudy Giuliani, of course, who has made a monstrous hash of his TV appearances. But Rudy got elected mayor of New York in the first place because he had broken up the mob as U.S. attorney in the early ‘90s. If there’s one area where he has unquestioned legal expertise, it’s the strengths and weaknesses of criminal enterprises.

Trump’s mob-boss outburst on Fox News, we might add, came even before we learned two more mob-style news items. A pair of Trump’s most trusted confidants, American Media CEO David Pecker (effectively the publisher of National Enquirer) and Trump Organization CFO Allen Weisselberg, were granted immunity in the Michael Cohen investigation. This was presumably so they could tell federal prosecutors in New York exactly how Trump funneled money through Cohen to Stormy Daniels and Karen McDougal.

Weisselberg, a man who stays out of the limelight and is believed to know almost everything about Donald Trump's finances, is obviously a figure of enormous concern to the president. There’s been a whole lot of overheated speculation from the likes of Chris Cillizza at CNN and Trump ghostwriter Tony Schwartz about what Weisselberg (or Pecker) might have to say about other matters to other investigators, now that he can’t be prosecuted (or pardoned, for that matter) for whatever less-than-legal stuff he may have signed onto. But Weisselberg has not spoken to Mueller or his grand jury, as far as we know, and I suspect that’s missing the point.

What the media's many students of scandal-ology keep assuming, or hoping, is that some huge and dramatic reveal is coming, the proverbial smoking gun that will definitively prove that Donald Trump conspired with the Russians to hack Hillary Clinton’s emails, spread lies on the internet and “steal” the election. Trump will be hauled away in chains, every elected Republican in the country will resign in disgrace and Nancy Pelosi will unanimously be elected emperor for life. Or something. I have a prediction to make: Nope. I am fairly well convinced that Robert Mueller has concluded no such evidence exists, and that the 2016 Trump campaign's collaboration with Russian agents — while dubious and sleazy as all get-out — was pretty much a freelance or impromptu sideline endeavor to the much larger criminal project of House Trump.

When Trump protests, in public and apparently in private, that the criminal conspiracy in which Michael Cohen has implicated him was an obscure technical violation of campaign finance law and had nothing to do with Russian collusion, he is 100 percent correct. He too is missing the point. Turning Cohen against the guy who believed he was the unassailable capo di tutti capi — and to some extent turning Pecker and Weisselberg too — was less about the specific charges in the Cohen case than about a demonstration of prosecutorial power. If you're looking for some reassurance about the enduring force of American institutions, there it is: The man who has consistently maintained he is above the law is not. Now the mob boss in the big house on Pennsylvania Avenue knows that his enemies have him encircled and have identified his weak spots, and that even his most trusted lieutenants can be trusted no longer.

This may well be the beginning of the end of the Trump presidency, although its endgame could take a long while yet. I have a further prediction, which is that we will probably never know for sure what happened between Donald Trump and the Russians, or exactly what kind of leverage Vladimir Putin has over Trump. That will be endlessly disappointing to those who want the real world to have the plot points of a miniseries (which, in fairness, is almost everyone), but it doesn’t mean Trump will get off scot-free.

Craig Unger’s book, which overtly seeks to prove the most grandiose case for collusion (and gets at least part of the way there), is full of so much arcane back story and rampant speculation that it reads like a first draft abandoned by John le Carré as too hard to follow. Mueller appears to have given up on pursuing those fairytales and legends, and is following a much simpler narrative. He believes Donald Trump is running a moderately successful but not very efficient crime family, which blundered into pulling off the biggest con job in history. He knows what to do in that situation: Keep on squeezing the money and sooner or later it talks.