I'm not running scared: On Mollie Tibbetts and rejecting the fear of jogging alone 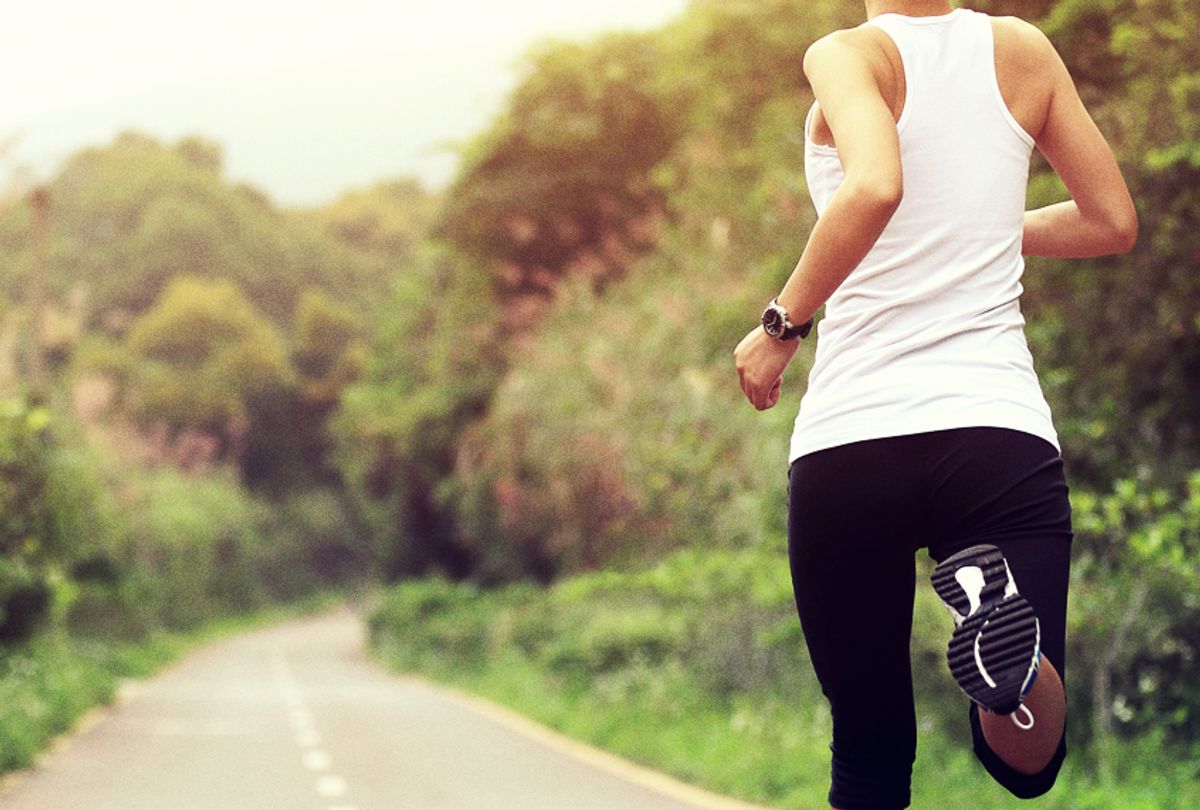 It started with Trisha Meili. I didn't know her name then, of course. I knew her, as everyone else did at the time, as a 28-year-old woman, a New Yorker, a professional, who had gone for a run one April evening in 1989 and been raped, beaten and left for dead. She was known, in the deluge of reporting that followed, as the Central Park Jogger. And with that sobriquet, generations of women received the memo: to move independently in the world, outside and alone, can be a very dangerous thing. Nearly 30 years later, the warning to female runners remains the same. Yet I keep lacing up my sneakers, regardless.

The July disappearance of 20-year-old college student Mollie Tibbets — followed by the discovery of her body and arrest of Cristhian Bahena Rivera for her murder — has once again sparked extensive media coverage and debate, with a spate of news stories on how to "stay safe while jogging." And like the Meili case, the Tibbets murder has quickly been spun into a cautionary tale of female vulnerability and racial anxiety.

It's one that's been told in varying forms, again and again, over the years. Over a nine day period in the summer of 2016, three women in three different states were killed while out running. First, 31-year-old Michigan nurse Alexandra Brueger was gunned down on a Saturday afternoon while on her regular route. Next, 30-year-old Queens resident Karina Vetrano was brutally sexually assaulted and strangled while out for an early evening run in nearby Spring Creek Park. Then, 27-year-old Vanessa Marcotte went for an afternoon run while visiting her mother in Massachusetts. Her partially nude, burned body was found strangled that evening. The "unsettling parallels" in the three cases made headlines around the world. Brueger's case still remains unsolved, while suspects have been charged in the other two.

The risks of violence to women are always present. They're there when we work, go to school, have relationships, or just go from one point to another. But the image of a woman being harmed while engaged in an athletic pursuit, harmed while moving her body freely, ostensibly making herself stronger, strikes a particular chord. It shakes us. It says, all your power and freedom are a dangerous illusion.

I spent a lot of my life not running. Long after I had ceased to be the chubby kid picked last in gym class, I still associated athleticism with humiliation. I didn't join a gym till I was 30. And while there were always a lot of reasons I didn't run, Trisha Meili was surely one of them. Gyms were seemingly safe. I had learned young that running might not be.

Then I moved across the street from a beautiful park. It was a staggeringly stressful time in my marriage and early motherhood, one in which I often felt lonely and isolated. Then one day I recognized a woman from my building out jogging. She looked at once intense and carefree. What the hell, I thought.

The next morning, I don't think I made it half a mile. But I'd fallen in love. I kept waking up early and clipping on my iPod shuffle, and a few months later I did my first 5K. I've run ever since, through personal disasters and triumphs. I've fundraised and I brought my sneakers on vacations to learn the terrain of new places through my feet. I learned to fill myself with air again after part of my lung was cut away. And I did a great deal of it all in the same park that I knew had been the site of my neighborhood's most notorious murder.

On a May afternoon in 2004, Juilliard student Sarah Fox left her Inwood apartment and set out for a run in the park. Her decomposed body was found there a few days later. A member of the search party told the New York Times at the time that it appeared she'd been dragged from a running path to an "isolated expanse." Though there have been promising leads, the case has never been solved. And still I run.

Last week, Huffington Post reporter Alanna Vagianos's Twitter thread on "running alone as a woman" went viral. She chronicled how running had done so many great things for her mental health. She said how, when someone broke into her first floor apartment while she was sleeping, the police asked if she was a runner and if she ran the same route. Years later, in a different city and after another attempted break-in, she made a choice, saying, "I never ran alone again." She wrote of the violence other women, including those she knows, have faced while running, and how it's affected them. It's a common concern.

Last week, CNN cited a 2016 Runner's World survey on harassment of runners that yielded the "startling" results that "Forty-three percent of women runners said they sometimes, often or always experienced such behavior" and that "54% of women said they were concerned at least sometimes while running, or getting ready to run, that they could be physically assaulted or have unwanted physical contact." Furthermore, "30% of women said they have been followed by a person in a car, bicycle or on foot." The suspect in Mollie Tibbets' death, Cristhian Bahena Rivera, reportedly claimed that he was following her in his car when he got out and began running beside her. But scary as that is, this is unusual behavior. And only 3 percent of people in the Runner's World survey said they had been "grabbed, groped, or otherwise physically assaulted."

I've been lucky. I've had very few incidents of note. On one not very early morning run on a major Manhattan street, I noticed a car slowly tailing me. I turned and ran in the opposite direction, and the car peeled off. Another morning, a few miles down the same street, a man standing idly in front of a deli suddenly jumped in front of me, and then laughed when I screamed. But I keep running.

Sarah Fox's life and death are often in my thoughts when I'm running in my park. I never go into the wooded areas on my own, and I stick to the more open spaces where a community of fellow runners and dog walkers can usually be found. I try to heed the advice one of the cops who worked on Fox's case gave me and avoid running with my headphones, though if I feel I'm in a safe and public enough space I'll play music at a low volume. I run while it's still light out, though that didn't help any of the other women recently killed while running. I keep my phone with me. I stay aware of my surroundings — especially in new areas — and I tell someone when I'm leaving and when I expect to return. I don't, however, buddy up, because if you asked me to name two things I loathe, I'd say: talking while running and trying to match someone else's pace. (See also: treadmills, which I only approach extreme hotel-induced duress.) My running is my meditation and my solitude, and without that solitude I wouldn't run. And what I love about runners is that they are the sweetest people in the world, who will smile and wave as they pass you and will then leave you alone.

As a mother of two girls, including one who just left for college in a town full of running and hiking trails, I take the threat of random stranger violence very seriously. I try to teach my daughters not to take unnecessary risks. The runner in me faces the death of Molllie Tibbets with a defiant insistence that I won't let fear stop me from doing anything. The mom in me eases into a low-level state of dread every time my girls leave the house.

Yet I remember a recent conversation with author Kim Brooks, who left her son briefly alone in her car on a cool day and got the cops called on her for it. Statistically, the greater safety danger that day was in getting in a car with a child and driving, not letting him sit in one that wasn't moving. But the perceived threat often feels bigger than the everyday one. I get nervous when my plane takes off; I worry about terrorism when I'm in the city and sharks when I'm on the beach and a stranger grabbing me from behind when I'm on a run. It's not uncommon to prioritize concerns like that. The more dramatic, unusual things somehow just loom larger and more mysterious in the imagination than type 2 diabetes or household accidents.

The near constant disruptions to our ability to simply be female and exist are real. But half of all female murder victims are killed by an intimate partner. We don't stop having relationships, though. So far this year in the U.S., it would appear only one woman has been killed by a stranger while running. Other ways women have died while running: terrorism, hit and run drivers, falling branches, heart attack. Every action carries risk. Are we going to stop taking actions?

Over the past several days, runners on social media have been dedicating their runs to the memory of Mollie Tibbets under the hashtag #MilesforMollie. I devoted my own morning run to her today as well. I'll do it again tomorrow. Because I'll keep jogging as long as my knees and the weather permit me, but I won't be running scared.

When a crime hits close to home

An author reckons with the murder of a former friend