Norm Macdonald has a show. But when hasn't he? That's the problem

The most recent reactions to #MeToo by men prove its point: the world's stage belongs to guys like Norm Macdonald 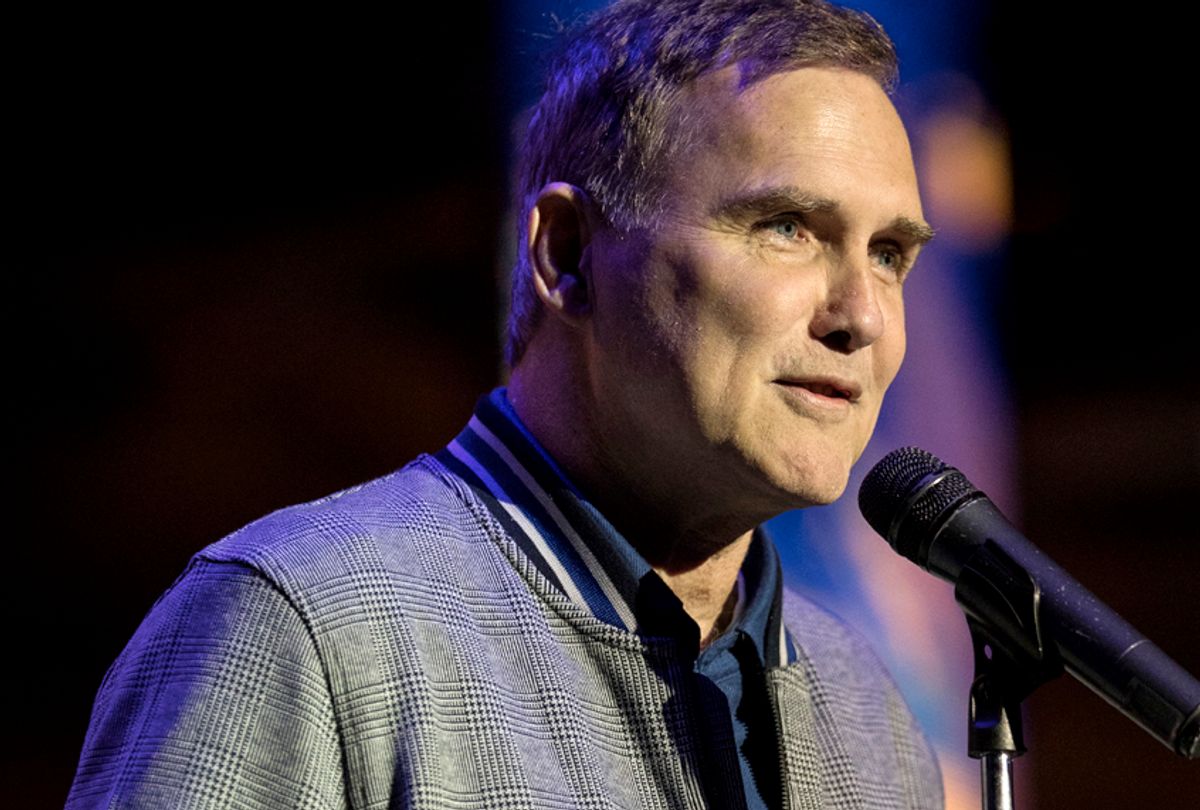 Listen up, everybody: Norm Macdonald has a Netflix show.

It’s called — have you heard about this? — “Norm Macdonald Has a Show.” It rolls out Friday.

Really, though, as the prior 48 hours of his press appearances have proven, we’ve never stopped living in some version of Norm Macdonald’s show.

Macdonald hasn’t been in our faces, per se. Sure, he’s enjoyed a recent stint as one of the rotating Colonel Sanders on those KFC commercials, worked as a golf commentator, and we can occasionally catch his “Weekend Update” segments when they pop up on repeats of classic “Saturday Night Live” episodes. He’s also the voice of Pigeon on “Mike Tyson Mysteries.” He’s managed to stick around, but not in an overt way.

But what I’m saying is, the world has always been ruled by some version of Norm Macdonald. That’s why so many people love him.

Ladies, you know what I’m talking about.  Chances are some jovial galumph that resembles Macdonald has been a part of your life at some point. You may have met him at college. He could be a work colleague. He's that guy who holds the door open for you and buys you lunch sometimes and apologizes for his good pal Bill when Bill drunkenly pinches your boob at after-work gatherings.

Because he knows Bill, see? He can vouch for Bill, who didn’t mean anything by it. Bill’s just joking around, old school.  It’s not worth making a scene by pressing assault charges against Bill. Don’t get so worked up!

Maybe your Macdonald has been known to drop a joke that diminishes people in a punchline — he’s one-sixteenth Irish, he can do that! — but is otherwise OK to be around and anyway, he’s from the Great White North where nobody means to be offensive.

Your Macdonald could be even subtler about it, a guy who respects you to your face but expresses confusion and concern over this whole #MeToo thing. Or even admits he’s happy the movement has slowed down a little bit, and that, as Macdonald shared with The Hollywood Reporter,

It used to be, "One hundred women can't be lying." And then it became, "One woman can't lie." And that became, "I believe all women." And then you're like, "What?" Like, that Chris Hardwick guy I really thought got the blunt end of the stick there.

Norm Macdonald has a show, which is great because so many people have missed him! David Letterman certainly did. Letterman produces “Norm Macdonald Has a Show.” And Letterman knows a little something about being an ally and a good buddy, since a decade ago he was caught up in a scandal that forced him to admit that he slept with female staffers. But Letterman did not have to lose his job or his celebrity status, likely thanks to receiving cover from the man who was his boss, disgraced former CBS head Les Moonves.

All things being equal (ha!) the legendary talk show host is on record as being a fan of Amy Sedaris — he even produced her 2005 film "Strangers With Candy" — who has her own Emmy-nominated show on TruTV. Sedaris earned that on her own merits because she is amazingly talented and loved by many. I wonder if Letterman will produce a talk show for Sedaris?

Never mind that, because Norm Macdonald has a Netflix show, ladies and gentlemen. Michelle Wolf does not. One show doesn’t have to die so the other may live, we know that. Hasan Minhaj also has a show, set to debut in a few weeks. He, like Wolf, is an up-and-coming comic and an alumnus of “The Daily Show.” He, like Wolf, is daring and thoughtful and smart.  Unlike Wolf he wasn’t vilified by administration officials and the press for the routine act of telling pointed jokes speaking ugly truths to power, which Wolf did at the White House Correspondents’ dinner.

But I do wonder if Wolf will receive as many chances as Macdonald has enjoyed over the three decades of his career. As she sculpts her sets, sharpens her punchlines, and tours and puts in all the grunt work that comedians are supposed to do, paying her dues, will such opportunities flutter down from on high, landing in her lap by the grace of a more powerful celebrity?

But right now, Michelle Wolf doesn’t have a show. Neither, for that matter, does Robin Thede, host of the cancelled-too-soon "The Rundown with Robin Thede."

Or Wanda Sykes. Sykes has a Netflix comedy special due to be released in 2019, but not a show.

Let’s see, who else doesn’t have a show? Ah yes, Tig Notaro, although she does have a hot property in development. Notaro did have an Amazon show, “One Mississippi,” which was critically acclaimed and heartfelt and brave and, in its second season, included a storyline that mirrored the actions of a certain comedian she called out. We could call him by his name here but we don't want to. It was cancelled after that.

Notaro, in speaking out at the height of her popularity, played a major role in toppling the comedy giant who had a production credit on her show, which she openly resented. Who could blame her? The answer, it seems, is Norm Macdonald.

“There are very few people that have gone through what they have, losing everything in a day,” Macdonald told The Hollywood Reporter, in reference to that comedian and Roseanne Barr, two good and supportive friends of his that he can vouch for. “Of course, people will go, ‘What about the victims?’ But you know what? The victims didn't have to go through that.”

Why are we getting so worked up? After all, Jane Fonda appears as a guest on his show. She’s a feminist!

In the meantime Macdonald suffered terrible blowback in all of this, forcing him to issue a classic pro-forma apology-that-is-not-an-apology (“I’m sorry IF” means you’re #sorrynotsorry) because of what he said in that Hollywood Reporter profile.

Roseanne and Louis have both been very good friends of mine for many years. They both made terrible mistakes and I would never defend their actions. If my words sounded like I was minimizing the pain that their victims feel to this day, I am deeply sorry.

This happened on the same day was booted from his scheduled appearance on Tuesday night’s episode of “The Tonight Show Starring Jimmy Fallon.” Then on Wednesday morning Macdonald reiterated how wrong and senseless his statements about #MeToo, which he’s deeply sorry about “If my words sounded like I was minimizing the pain that their victims feel to this day,” by telling radio host Howard Stern, “You’d have to have Down syndrome to not feel sorry” for victims of harassment.

In case we didn’t get that zinger, he repeats it. “Down syndrome. That’s my new word.”

He didn’t mean anything by it!

Does the Norm Macdonald in your life still fail to comprehend what the big deal is, even given what we know about troublesome effects of extra adipose tissue and higgeldy-piggeldy hormones that are turning women into overly sensitive and crazed social justice warriors? Alrighty, then. Let’s talk about Geoffrey Owens, a dude. He too was affected by #MeToo, just not in the way your Norm might think. See, if Bill Cosby hadn’t spent half a century drugging and assaulting women, Owens’ household would continue to be supported, in part, by the modest residuals he’s earned from his work on “The Cosby Show.”

That show is no longer running in syndication. It did, mind you, for many years after the first victims came forward because nobody was listening. Nobody was saying, "I believe all women." But did Owens whine about the unfairness of #MeToo? No.  He took on a job at Trader Joe’s and kept on living his life and shaping a career based on choice as opposed to any driving thirst to remain in front of the public at any cost. His career includes teaching courses on Shakespeare. Fox News job shamed him for his Trader Joe’s gig by way of an unflattering candid photograph taken without his permission.

Other media outlets, including “GMA,” subsequently stepped up and allowed Owens to have his say, which he did by affirming the worthiness of honorable work for all people who can get it — men and women. In response, he’s received a number of job offers and booked a role on an “NCIS: New Orleans,” which recently suspended its abusive showrunner.

Owens, Yale-educated and devoted to his craft, has a job.

Norm Macdonald has a show.

Comedian Nikki Glaser, revealed as one of the contestants on the upcoming cycle of “Dancing with the Stars,” does not. She used to have a show on Comedy Central, “Not Safe with Nikki Glaser.” Like Stern, she also has a radio show on SiriusXM, and that’s terrific. Widely watched as “Dancing with the Stars” happens to be, it also is thought of as a competitive series for D-listers and folks who are more infamous than famous.

I am not casting aspersions upon Glaser, understand. Everybody’s got to work. Except, maybe, the guy who masturbated in front of women and then denied it, vehemently, calling their credibility into question and giving club managers and bookers in the comedy world reasons not to hire them. Glaser knows this. Glaser and other women working in comedy have lost work because they’ve publicly supported #MeToo and fellow female comics who have suffered in silence over the years or even been driven out of the profession.

The man responsible for making their stories top news, meanwhile, is a millionaire many times over. He can buzz off to Europe and spend the rest of his life doing private sets for Harvey Weinstein and Roman Polanski and making underground comedy films inspired by French New Wave cinema.

Or the woman who keeps getting hired despite engaging in a reliable cycle of attacking minorities and women on Twitter regularly. She’s probably be back in some form, and she will be fine.

I mean, look — Norm Macdonald has a show.

Author Ian McEwan on why Roe V. Wade could move from settled law to a contested case.