NBC News anchor Megyn Kelly defends Susan Collins: "It could have been a case of mistaken identity"

"My point is: There can be a way of voting for him without saying, 'I'm voting for a sexual assaulter,'" Kelly says 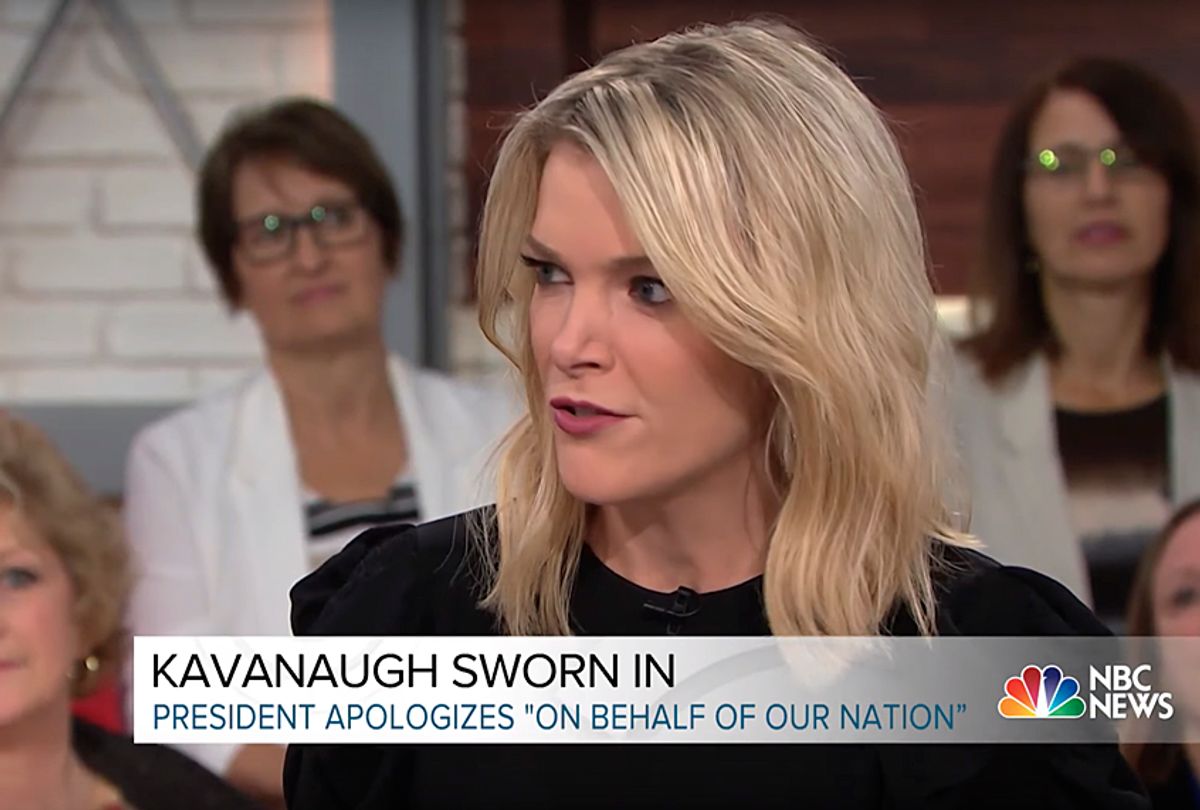 "It could have been a case of mistaken identity. I do believe that's possible," Kelly claimed Tuesday during the third hour of the "Today Show." "And you can look at Dr. Ford and say, 'She just didn't convince me. There were too many holes in her story. I didn't find her credible.' Or you could believe something did happen between them, and Christine Ford is remembering more than actually happened in the moment."

Kelly added that Rachel Mitchell, the female sex crimes prosecutor hired by Republicans on the Senate Judiciary Committee Republicans to question Ford during her Sept. 27 testimony, appeared to be "trying to prove that Dr. Ford was a little anxiety-ridden, and she was sort of what we call in the law an eggshell plaintiff. So maybe something happened, but it wasn't quite as bad as she remembers. And it was so minimal that Brett Kavanaugh doesn’t even remember it."

Despite Kelly's assertion, Mitchell's approach has come under intense scrutiny for focusing less on Ford's allegation of attempted rape by Kavanaugh at a high school house party in the '80s — a moment Ford said made it so hard for her to breathe that she thought the future Supreme Court justice might accidentally kill her — and more on small details: Was the television on during the assault? Did Ford remember who drove her home from the party where the assault allegedly occurred?

Mitchell additionally spent a significant amount of time interrogating Ford about her fear of flying and pressed her about her financial arrangements, including multiple questions about who paid for the polygraph test she had submitted — an apparent effort to suggest that Ford could have been paid by outside groups.

Last week, Collins cast one of the key swing votes in the battle to confirm Kavanaugh to the nation's highest court despite the multiple allegations of sexual misconduct raised against the judge. The Maine Republican faced swift backlash for supporting Kavanaugh, which Kelly suggested was unfair, saying "she just got killed" for her vote and that those looking at the Kavanaugh issue as a divisive and partisan one are missing the bigger picture.

"My point is: There can be a way of voting for him without saying, 'I'm voting for a sexual assaulter,'" Kelly emphasized.

Last week, Kelly, who has cast herself as an ardent supporter of the #MeToo movement, proclaimed on air that the slogan "believe women" may "sound nice," but it is "utterly inconsistent with the fundamental principles of our justice system – utterly inconsistent."

She also accused Democrats of "trying to maneuver Dr. Ford and others as political weapons" in a string of pointed comments that more closely resembled the tone of her right-of-center Fox News primetime show than the historically centrist one of "Today." As further evidence, the NBC anchor challenged former President Barack Obama’s education secretary to a debate her on air.