Trump Cabinet firing spree to continue: John Kelly and Kirstjen Nielsen next on the chopping block? 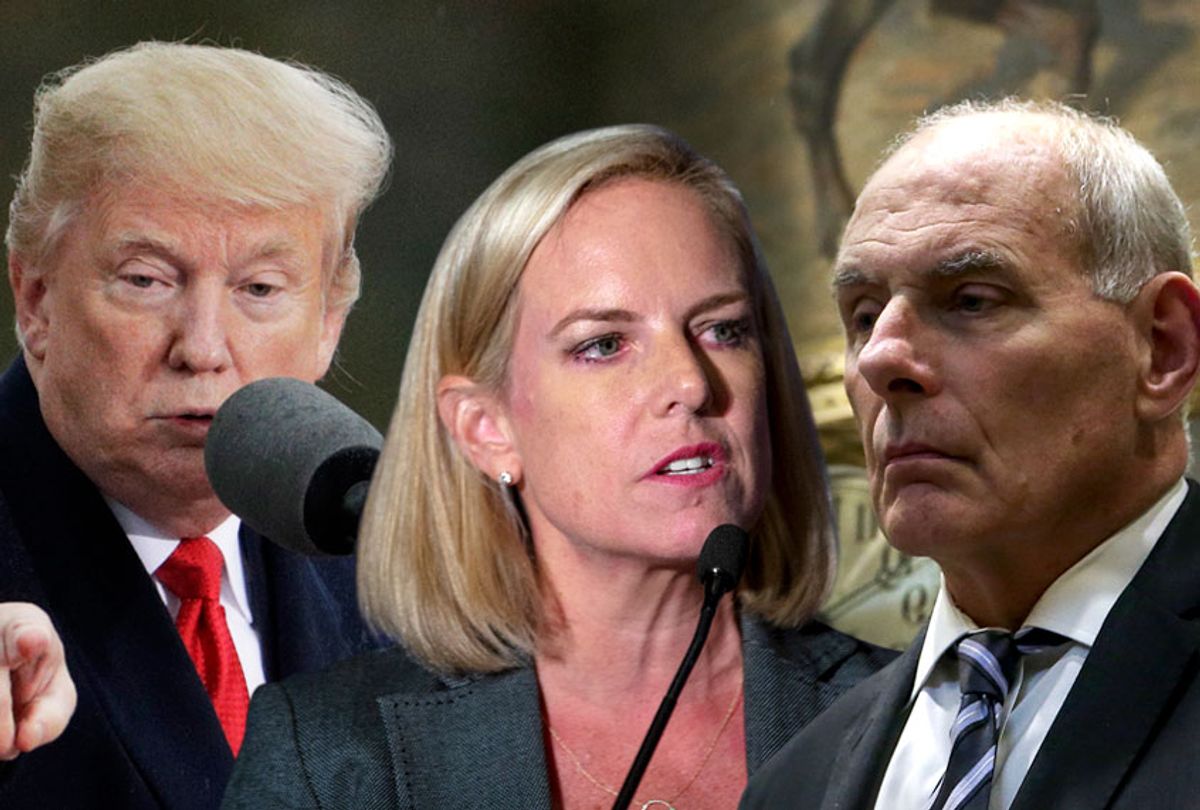 President Donald Trump plans to fire his chief of staff, John Kelly, and Department of Homeland Security Secretary Kirstjen Nielsen in the coming weeks in what appears to be the latest major shakeup in the White House after last week's midterm elections.

NBC News reported on Monday that Kelly may leave his West Wing post and that Nick Ayers, Vice President Mike Pence's chief of staff, is among those being considered to replace him.

"There have been instances where the East Wing staff were not treated as equals to the male-dominated decision makers in Chief Kelly’s office," one White House official told NBC News. "Promotions were denied then finally granted after months of requests," according to the unnamed source:

The requests languished for months as Kelly insisted there weren’t enough available positions for the first lady’s aides to have senior titles, these people said. During this same period however, West Wing officials working for Kelly received promotions, the White House officials said.

Having learned of the dispute, the president was furious and told Kelly to give the first lady, who has a smaller East Wing staff than her recent predecessors, what she wanted, these people said. "I don't need this shit," Trump told Kelly, according to one person familiar with the conversation

Kelly's departure would put an end to a tenuous relationship.

Kelly was key in installing Kirstjen Nielsen as his successor at the Department of Homeland Security. Nielsen was Kelly's chief of staff when he was DHS secretary, and he has regularly defended Nielsen against Trump's condemnation. Last month, Kelly and national security adviser John Bolton reportedly got into a shouting match over Neilsen's performance, according to multiple reports.

Nevertheless, the president has reportedly grown frustrated with Nielsen's handling of immigration policy since she assumed her post last December, according to The Washington Post. The Department of Homeland Security has been at the center of several high-profile conflicts this year, including the Trump administration's much-criticized decision to separate migrant families at the U.S.-Mexico border and place migrant children in detention centers. (Trump later signed an executive order reversing his policy of separating families, and replacing it with a policy of detaining entire families together, including children, for an indefinite period.)

Nielsen emerged as a vocal defender of the Trump administration "zero-tolerance" immigration policy that has prompted widespread outcry. She also echoed Trump's "both sides" rhetoric ahead of the one year anniversary of the white supremacist "Unite the Right" rally in Charlottesville, VA, where counter-protester Heather Heyer was struck and killed by a man who was allegedly "infatuated" with Nazis.

Senator Cory Booker, D-NJ, previously condemned Nielsen over her failure to recall and criticize Trump's alleged "s**thole" remarks during a Senate hearing, telling the secretary, "Your silence and your amnesia is complicity." During Booker's impassioned critique, Nielsen rolled her eyes at the senator and, one guesses, his legitimate concerns, the violence he talks about, the seriousness of this moments and, one may suppose, the threats it contains.

"The Secretary is honored to lead the men and women of DHS and is committed to implementing the President's security-focused agenda to protect Americans from all threats and will continue to do so," Houlton wrote in a statement to the Post.

For her part, Nielsen had reportedly come close to resigning after Trump scorned her in front of other Cabinet members in May, expressing frustration over her efforts to reduce undocumented immigration — one of his signature campaign pledges. That mistreatment in front of the cabinet prompted Nielsen to draft a resignation letter at the time, which she never delivered.

She has also faced a swarm of angry protesters in the past year over her leadership at DHS. In June, Nielsen had to abruptly leave her dinner table at a Mexican restaurant in Washington, D.C. after activists confronted her and chanted "shame." Other protesters gathered outside her house and played the gut-wrenching audio of crying and wailing migrant children separated from their parents at the border.

Several members of the Homeland Security Advisory Council in July resigned their positions in protest of the Trump administration's family separation policy, calling the practice "morally repugnant, counter-productive and ill-considered."

Kelly's and Nielsen's departures would be the second major White House "reboot" following the midterm elections, in which Democrats seized control of the House of Representatives. Trump fired Attorney General Jeff Sessions last week, putting an end to a tumultuous partnership that resulted in more than a year of public scorching due to Sessions' decision to recuse himself from special counsel Robert Mueller's ongoing investigation into allegations of collusion between Trump's 2016 presidential campaign and the Russian government.

Back in June, CBS reported that press secretary Sarah Sanders was planning on leaving the White House by the end of the year as well. At the time, Sanders issued a statement in attempt to diffuse the speculation, but she never actually denied the reports that she's planning on leaving 1600 Pennsylvania Ave soon.