Pour one out for John Kelly: Trump tells reporters chief of staff is finally done

After 17 rocky months at the White House, the former Marine general once seen as Trump's adult handler is out 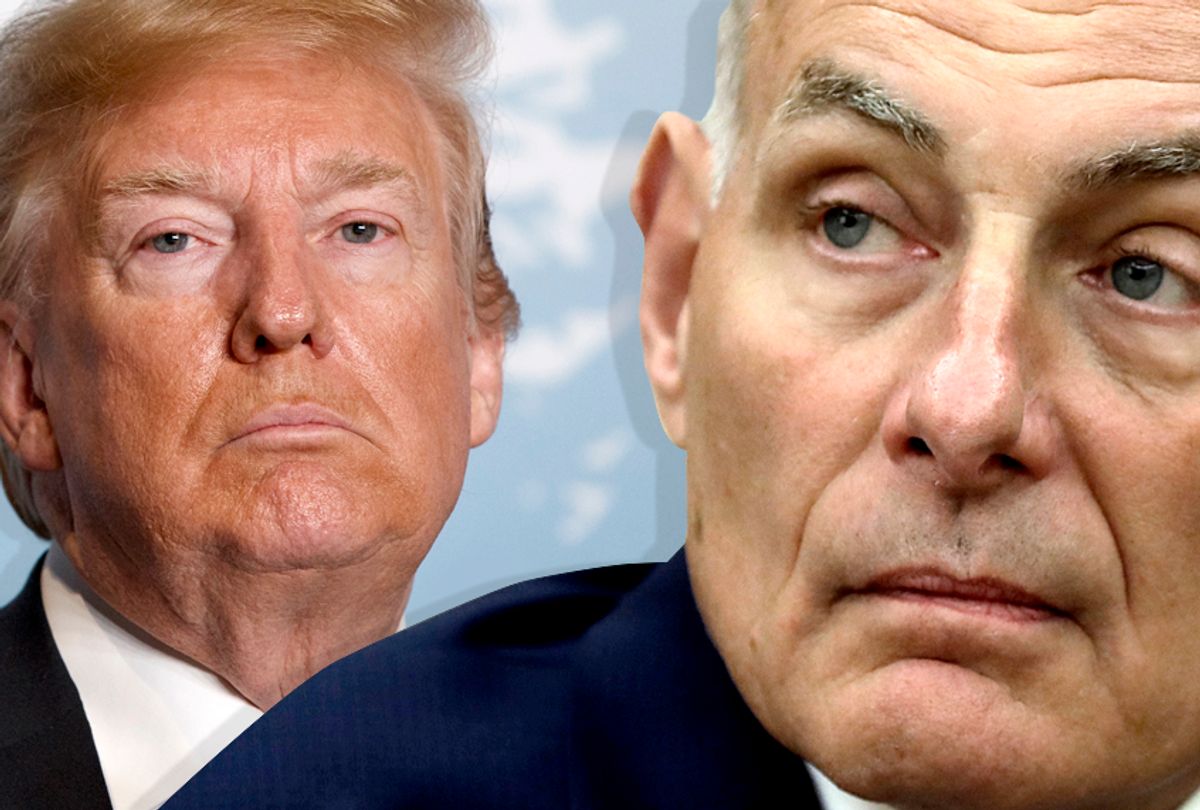 In a further sign that chaos reigns inside the Trump administration, President Trump told reporters on Saturday that White House chief of staff John Kelly would leave "toward the end of the year," which presumably means within the next three weeks. Kelly's departure is not unexpected; rumors have been flying about his status for months, and reports this week have suggested he was finally out the door. This will reduce the cadre of "generals" around Trump — once a point of pride for the president — to one, Defense Secretary Jim Mattis.

Kelly, a retired Marine Corps general, joined the administration in July 2017, replacing Trump's first chief of staff, former Republican Party chair Reince Priebus. Although Kelly was initially something of a media darling, and was widely credited at first with trying to instill military-style discipline in a notably disorganized White House, his relationship with the president has been rocky for much of his tenure.

Shortly after his appointment, Kelly reportedly forced out White House strategic adviser Steve Bannon, and fired communications director Anthony Scaramucci after 11 days on the job. He insisted that Health and Human Services Secretary Tom Price be fired after the latter spent taxpayer money on expensive charter flights, and tried to implement a rule that Cabinet-level travel had to be cleared through his office. Kelly also sought to limit the access and influence of Jared Kushner, the president's son-in-law and trusted adviser, which some observers have suggested was a bridge too far and may have turned Trump against Kelly.

Trump has evidently blown hot and cold with Kelly over the last year or so. Reports have suggested Kelly was unaware of a personal phone call between Trump and Russian President Vladimir Putin last March and was not involved in the decision to replace former national security adviser H.R. McMaster with the ultra-conservative John Bolton. Kelly was conspicuously displeased with both of those events, and at times seemed overtly exasperated by his boss' whims and moods.

As USA Today reports, "At one point, Trump mused about doing away with the chief of staff post altogether, and have various department heads report to him directly. He reportedly told aides he was tired of being told 'no' by Kelly."

Despite all that, Trump had reportedly asked Kelly last summer to stay on through the 2020 election, and the chief of staff had accepted. Democratic victories in the November midterms and the encroaching accusations and indictments of Robert Mueller's investigation have clearly had an effect inside the White House. Much more reporting and guesswork is certain to follow, but it's reasonable to conclude Kelly had decided the constantly changing temperature of the administration made his position untenable.

Trump, who spoke to reporters outside the White House while on his way to the annual Army-Navy football game in Philadelphia, called Kelly "a great guy" and said he would announce a successor within the next few days. Almost every Trump-watcher expects that replacement to be Nick Ayers, current chief of staff to Vice President Mike Pence, who is seen as a loyal administration foot-soldier and is well liked by the president.