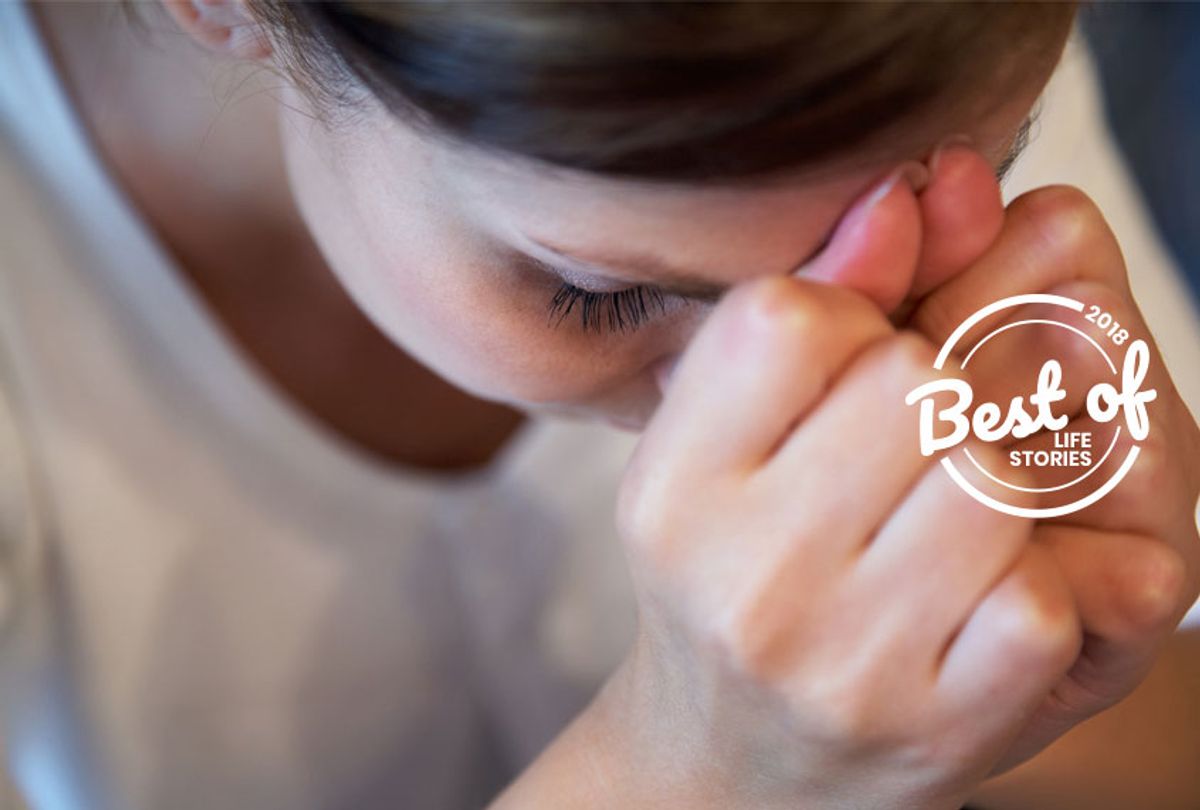 This life story was originally published on Salon on July 29, 2018.

My relationship with my Catholic faith is a lot like my relationship with social media. Both are a source of community, inspiration and activism. And both are also full of terrible old men saying awful things. I've spent years trying to manage that tension, trying to hold on to the good and filter out the worst. But this past Sunday, for the first time in my life, I walked out of church in the middle of mass.

I've always been more of Stephen Colbert Catholic than a Paul Ryan one. I grew up with guitar playing, "Day by Day" singing masses in parishes that put an emphasis on community service. My spiritual practice as I have always understood it teaches that Christianity means tolerance, forgiveness, unselfishness and simplicity. I fail at this a lot, but that's where I set the bar, and that bar was built by my Catholicism.

That has also meant, over the years, recognizing my obligation to call out the crimes and hypocrisies of the institution and to advocate for progressive values. Just as practicing the values that democracy stands for often means standing up to and being critical of the government, I know that practicing faith means being willing to criticize, question and hold the church accountable. I must also — in church just as everywhere else in the world — figure out where my daughters and I fit in within a culture that is inhospitable to women. Lately, that inhospitality has become intolerable.

My family and I are all pro-Jesus, though we express it in different ways. My Protestant spouse is the son of two ministers, and he has his issues with organized religion. My older daughter goes to church on holidays and refers to herself as Catholic but is otherwise uninvolved. My 14-year-old, however, took to the church exactly like I did as a child. She loves the ritual and order of it; she loves the storytelling of it. And she loves the values it represents. We go to mass together on Sunday mornings, and it's a meditative bonding time for the two of us.

We live near a small parish run by a Capuchin Franciscan order. Franciscans, along with Jesuits like Pope Francis, place a strong emphasis on service, social justice and the needs of the poor. In the aftermath of Hurricane Sandy, my parish organized cleanup and relief efforts. It conducts services in English and Spanish, has a food pantry, is home to a Girl Scout troop and stays visible in the fight against discriminatory housing practices and economic displacement in our lower income neighborhood. This is the Catholicism that I believe in and fight for, one spirituality rooted in real world action, one that speaks out from the pulpit against greed and violence.

Then there's the other kind of Catholicism. We recently had a new priest join the parish, and the message has been changing. A few weeks ago, when the new priest was conducting services, my daughter and I both flinched when he spoke of "traditional" marriage, which can "only be between a man and woman."

We know the Vatican's official stance on marriage equality. We also know that just a few months ago, another of our parish priests echoed Pope Francis in pointedly stating that God makes us who we are and loves us as we are. This new message was an alarming contrast.

Then this weekend, the same priest got up and began to speak on the culture of respecting life. Last winter, we heard a similar sermon from a different priest. The theme then was mass shootings and gun violence.

This time, the new person stood up and condemned women who "kill their babies for convenience." I sat rooted in my pew for a moment, a flurry of thoughts racing around at once.

I thought of Savita Praveen Halappanavar, a pregnant woman who was refused intervention as she was dying of sepsis in an Irish hospital because her fetus still had a heartbeat. I thought of the pregnant Dominican teen with leukemia who was denied both chemo and an abortion because of the country's strict laws against choice. How she suffered a miscarriage and died. I thought about the two years I was in experimental treatment for late stage cancer, and the choice I would have faced if I'd faced an unplanned pregnancy during it: to have an abortion, or stop treatment and likely die. I wondered how "convenient" it would have been for my children to grow up without a mother. I thought of how often the church demands women sacrifice their lives, out of pure spite and biological ignorance.

I don't expect any parish to contradict the church's official stance on key issues. I also don't expect someone who has never faced that choice — or likely even spoken honestly with someone who has — to stand up and speak authoritatively on the motivations of women with regard to their own bodies.

Maybe if he'd just left it at that one line, I'd have stayed. But the priest continued, quoting Mother Teresa's edict that "The greatest destroyer of peace today is abortion, because it is a war against the child, a direct killing of the innocent child, murder by the mother herself." That's when I leaned over to my daughter and whispered, "I have to go."

She looked surprised, but she nodded and said, "Okay." And I picked up my purse with my offertory donation still in it and left.

Afterward, my daughter and I had a good talk. She said she'd been upset too, but, in her words, "I wanted to stay for God, not for him." We talked about what to do when our personal beliefs don't match up with what someone in authority says we should do. Fortunately, we have a role model in Christ, who knew a thing or two about running afoul of those in power. The moral compass is always clear for both of us — to affirm the dignity of loving relationships and to respect the health and privacy of women.

These are, by the way, issues that Jesus says literally nothing about in the Bible. And lest you think the Church's hardline stance against all forms of abortion is eternal and unchanging, you should know it dates to 1869. Prior to that, there was discussion and debate over when a fetus is ensouled, with saints like Augustine and Thomas Aquinas supporting a distinction between life and humanness. For much of the church's history, first trimester termination of pregnancy was not grounds for excommunication.

Being a liberal Christian means getting comfortable with pissing off everybody. Atheists and critics of the institution say we're foolish for our beliefs; evangelicals condemn us and say God will judge us harshly. All I know is that first and foremost, I have to be accountable to my own conscience and to the incarnation of God I believe in. It means being a thoughtful, questioning individual in the world, even if I don't get the easy luxury of feeling absolutely right about anything.

If you can believe in a God who gives us doctors and medicine, you can believe in one who doesn't expect women to be punished with death. You can believe in one who values women at least as much as fetuses. As we prepare to fight to preserve Roe v. Wade, the lives and health of young women like my daughters are at stake, and I won't be silent, anywhere, about that. My daughter tells me she doesn't know whether she's going back to our church this Sunday. I'm not either. It's not our beliefs that have changed; it's our staffing. And if we can't find compassion and respect inside of one building, it doesn't shake us. It just means it's time to knock on another door.