"No one should feel unsafe in the United States of America, and that includes our . . . immigrant community" 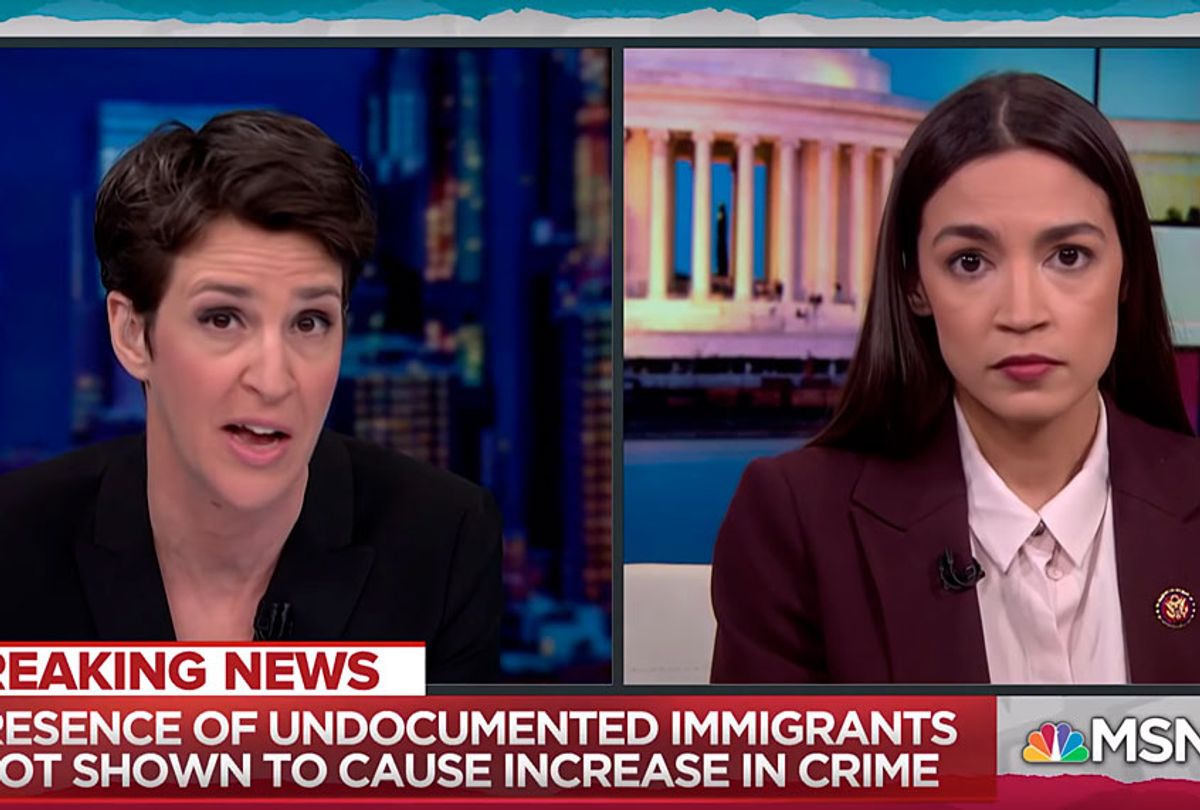 Following President Donald Trump's televised Oval Office address, newly-elected Rep. Alexandria Ocasio-Cortez (D-N.Y.), the youngest woman ever elected to the U.S. Congress, slammed the commander-in-chief for stoking racial resentment of immigrants in an effort to use fear to rally support for the construction of his $5.7 billion "wall" along the U.S.-Mexico border

In an interview with MSNBC's Rachel Maddow Tuesday night, the 29-year-old Democratic socialist praised immigrants while dismissing the president's fear-mongering rhetoric and blatant lies, which were contradicted even by his own administration, about the so-called "pipeline" of illegal drugs that he claims is coming across the southern border.

"No one should feel unsafe in the United States of America," Ocasio-Cortez said, "and that includes our amazing and beautiful and productive immigrant community."

The freshman congresswoman, who has emerged as a national progressive firebrand, then called upon the president to recognize "that he has systematically engaged in the violation of . . . human rights on our border," including the separation of migrant families. She then recalled the death of an immigrant child in Border Patrol custody on Christmas Eve, questioning how Trump could continue asking for financial support for the U.S. Immigration and Customs Enforcement (ICE) after the agency's widespread corruption and abuse of authority has been brought to light.

Earlier, Trump urged congressional Democrats to give in and allocate billions of dollars in funds for the border wall, which he repeatedly promised Mexico would pay for on the 2016 campaign trail, to reopen the partially-shuttered federal government. Portraying immigrants as violent criminals, the president argued that a wall was needed to resolve a "humanitarian and national security crisis on our southern border." "How much more American blood must we shed before Congress does its job?" Trump asked.

Summing up the president's comments, Ocasio-Cortez suggested that his remarks were unpatriotic, saying the immigrants attempting to seek refuge in the U.S. are "more American than any person who seeks to keep them out will ever be."

Trump and congressional Democrats continue to spar over funds to build a wall along the southern border, with Trump threatening to declare a national emergency to fund the wall if Democrats do not budge. The shutdown, which approaches the three-week mark, appears to have no end in sight. Meanwhile, hundreds of thousands of federal workers continue to go without pay.