"America will never be a socialist country," Trump says with the Democratic socialists present in his audience 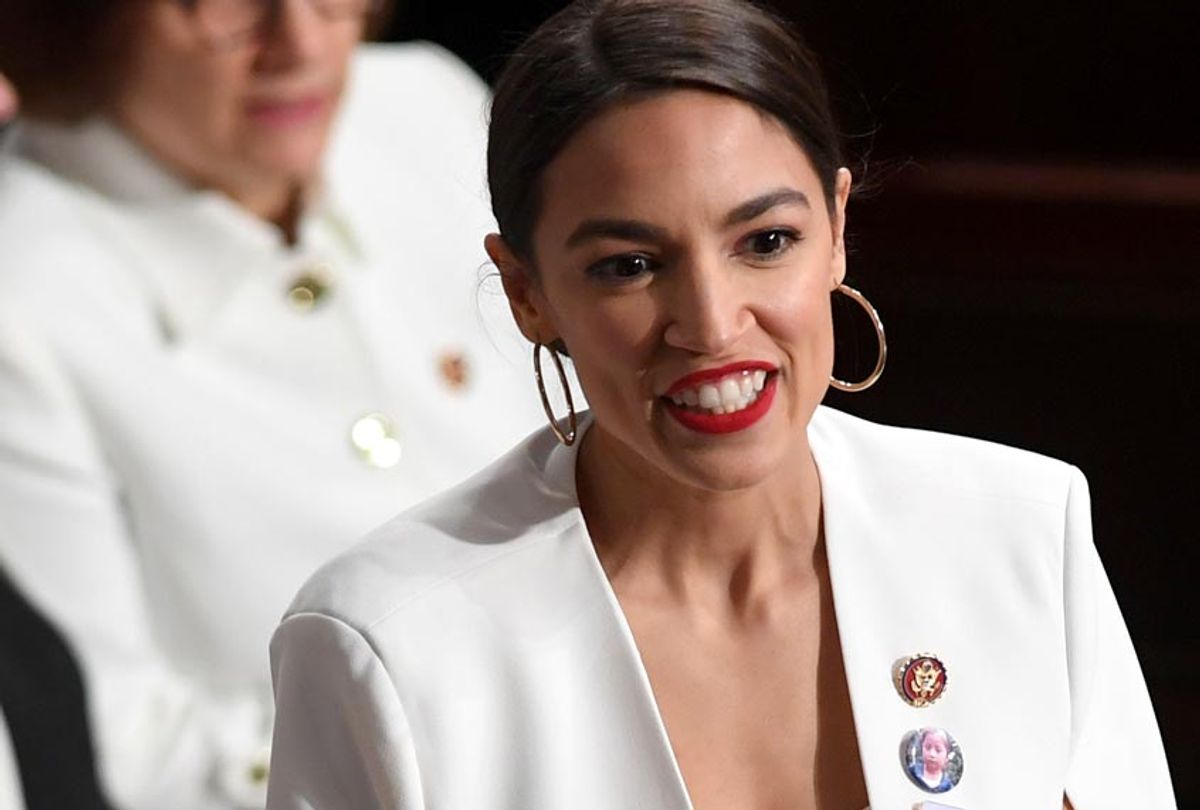 US Representative Alexandria Ocasio-Cortez smiles, dressed in white in tribute to the women's suffrage movement, as she arrives at the State of the Union address at the US Capitol in Washington, DC, on February 5, 2019. (Getty/Saul Loeb)
--

President Donald Trump appeared to fire a warning shot at the multiple members of Congress who now openly describe themselves as "democratic socialists" during his State of the Union address.

"Here, in the United States, we are alarmed by new calls to adopt socialism in our country," Trump said Tuesday night to rousing cheers — and a standing ovation from Republicans present in the House chamber. "America was founded on liberty and independence — not government coercion, domination and control."

"We are born free, and we will stay free," the president added. "Tonight, we renew our resolve that America will never be a socialist country."

Without mentioning them by name, Trump seemed to directly rebuke two stars of "the resistance," Sen. Bernie Sanders (I-Vt.) and Rep. Alexandria Ocasio-Cortez (D-N.Y.), as he invoked fears over the political uncertainties facing Venezuela in his fever pitch against socialism.

Ocasio-Cortez responded to the president's remarks by saying that he clearly "feels himself losing on the issues" during an appearance on MSNBC after Trump's address.

The freshman congresswoman, a self-identified "democratic socialist," was sworn into the House of Representatives in January as Democrats reclaimed control of the lower chamber.  During her Democratic primary in June, the political novice unseated incumbent Rep. Joe Crowley, who at the time was the fourth highest-ranking Democrat in the House. The policies she supports include universal health care, tuition-free public universities and criminal justice reform. Ocasio-Cortez has also proposed tax-rates as high as 70 percent on the super-rich to fund the "Green New Deal," an ambitious plan to combat the threat of climate change.

Ocasio-Cortez, the youngest woman ever elected to the U.S. Congress, has emerged as a national progressive firebrand and has captured the attention of Americans of all political stripes and, along the way, has become a near constant target of the Republican Party's attacks and smears. She has occasionally received a less-than-warm reception on Capitol Hill from fellow Democrats, especially over her vow to back primary challengers against party incumbents.

Ocasio-Cortez is not old enough to run for president of the United States — but a recent poll found that nearly three-quarters of Democrats and Democratic-leaning voters, and 30 percent of Republicans between ages 18 to 34, would consider casting a ballot for her if she were able to launch a White House bid. Trump, for his part, is known for his penchant for polls.

Sanders, meanwhile, is reportedly becoming more serious by the day about forging a second White House bid to challenge Trump in 2020.  He is just one of many names being floated as a potential challenger to Trump in what is expected to be a very crowded Democratic field in 2020 that features a heap of ambitious progressive leaders — and not the so-called "establishment" kind like Hillary Clinton. Should he throw his hat in the ring, he would likely face competition for the Democratic nomination from fellow Sens. Kamala Harris (D-Calif.), Elizabeth Warren (D-Mass) and Cory Booker (D-N.J.) — three outspoken liberal leaders who have embraced Sanders' call for "Medicare for All" and a $15 minimum wage, among other policy proposals that helped establish the Vermont independent as a national figurehead for socialist ideas.