Elijah Cummings rebukes Republican efforts to erode "essence of our democracy": "This is not Russia" 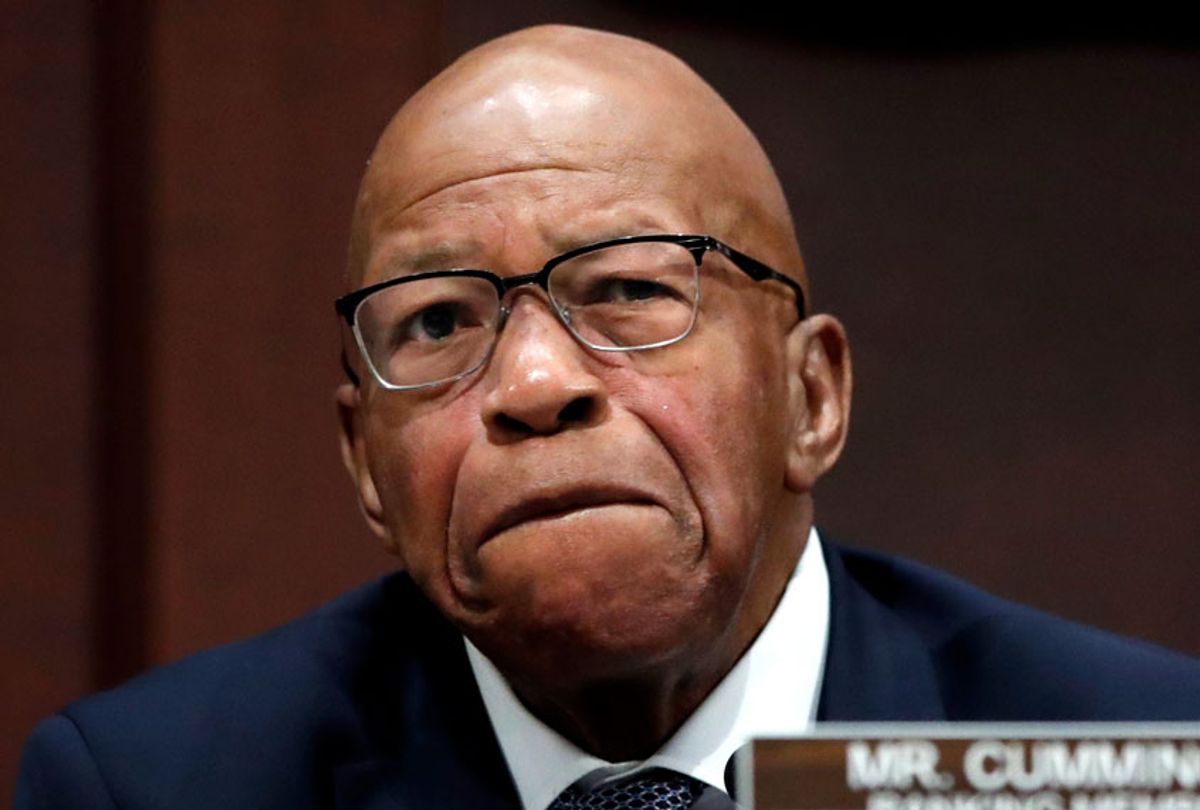 In a speech to the House Oversight Committee on Wednesday, Chairman Elijah Cummings, D-Md., did not hold back while arguing that "most Republicans" have tried to keep people from voting by "cutting back on early voting, eliminating polling places, and taking other steps to reduce the number of people who vote."

"Especially troubling," he said, "in some cases, they have engaged in illegal efforts to suppress the vote that target minority communities."

“One year ago today, on my mother’s dying bed, at 92 years old — former sharecropper — her last words were, ‘Do not let them take our votes away from us,’ ” Cummings said during Wednesday’s hearing. “They had fought. She had fought and seen people harmed, beaten, trying to vote. Talk about inalienable rights. Voting is crucial, and I don’t give a damn how you look at it.”

American politicians, Cummings argued, should be making it easier for people to vote and encouraging increased voter turnout through "early voting, absentee voting, voting by mail, and other ways to help citizens cast their votes."

Cummings championed a bill, H.R. 1, that would simultaneously protect voters' rights and attempt to remove the covert influence of big money in politics. He called H.R. 1 "one of the boldest reform packages to be considered in the history of this body," and declared that the "sweeping legislation will clean up corruption in government, fight secret money in politics, and make it easier for American citizens across this country to vote" to open his remarks.

Cummings pointed to controversial anti-voter efforts in North Carolina, Georgia and Kansas. After that, he discussed how H. R. 1 would "institute procedures to automatically register eligible voters and put in place protections to keep them on the correct voter rolls. It would provide for expanded early voting and absentee voting and give additional funding to states to maintain enough polling sites so everyone can easily go cast their ballot."

Cummings vowed to “fight until the death” to ensure that every citizen has the right to vote, “because it is the essence of our democracy.”

“This is not Russia,” he said. “This is the United States of America!”

One of the most controversial election fiascos occurred in Georgia, where Republican candidate Brian Kemp managed to purge 340,134 voters from the rolls in his campaign to defeat Democratic candidate Stacey Abrams and become the next governor. Because the difference between Kemp and Abrams was less than 60,000 votes, Abrams could have won if even one-third of the purged voters had showed up and (as is considered likely) had overwhelmingly voted for her.

"We have already been told that has Brian Kemp has laid down the law to all the counties, 'You are not to count provisional ballots of anyone who has been purged, even if they have been purged wrongly,'" journalist Greg Palast told Salon last year. "Now we have, as we know, 340,134 people purged for moving who didn't move. We don't know how many will vote, but if they show up, they have been given no notice, and when they show up a lot of them will be shocked to find that they have been removed from the voter rolls."

Cummings also discussed a feature of the bill that would implement new reforms in the Executive Branch, explaining that his focus would be on the section that falls within the committee's jurisdiction under Title VIII. These would include a ban on senior officials "from accepting 'golden parachute' payments from private sector employers in exchange for their government service," a provision that Cummings claims would have prevented former Director of the National Economic Council Gary Cohn "from receiving more than $100 million in accelerated payments from Goldman Sachs while leading the Trump Administration’s efforts to slash corporate taxes." Another section would "require transition teams to have ethics plans in place and make those plans publicly available," while a third would "prohibit senior federal employees from working on matters that affect the financial interests of their former employers or prospective employers. They could obtain waivers for this requirement, but those waivers would have to be made public."

Finally — and perhaps as the most pointed rebuke of President Donald Trump — "Title VIII also would make clear that Congress expects the President to divest his business holdings — just as every single President since Jimmy Carter has done — and place them in an independent and truly blind trust."

Previous attention has been drawn to the ways in which Trump's perceived or actual corruption can hurt the economy. As Sen. Martin Heinrich, D-N.M., explained in a report from 2017, "Congress must be vigilant against the potential for President Trump to enrich himself and his family at the expense of the average American. The president and his family’s conflicts of interests are inexcusable and unacceptable, and could depress economic output by over $1,000 per person just in one year. Not only are these practices dangerous, but harmful to the economic security of American families across the country."

House Speaker Nancy Pelosi has already announced her support for H. R. 1 and her commitment to "advancing" it, although this refers not to having an immediate floor vote but rather to House committees holding hearings on the measure.

"During this Black History Month, I am pleased we will be advancing H.R. 1, which contains Congressman John Lewis’s Voter Empowerment Act ensuring equal access to the ballot for every eligible voter, and lays the groundwork of the subsequent passage of Congresswoman Terri Sewell’s Voting Rights Advancement Act," Pelosi wrote in a "Dear Colleague" letter on Monday.