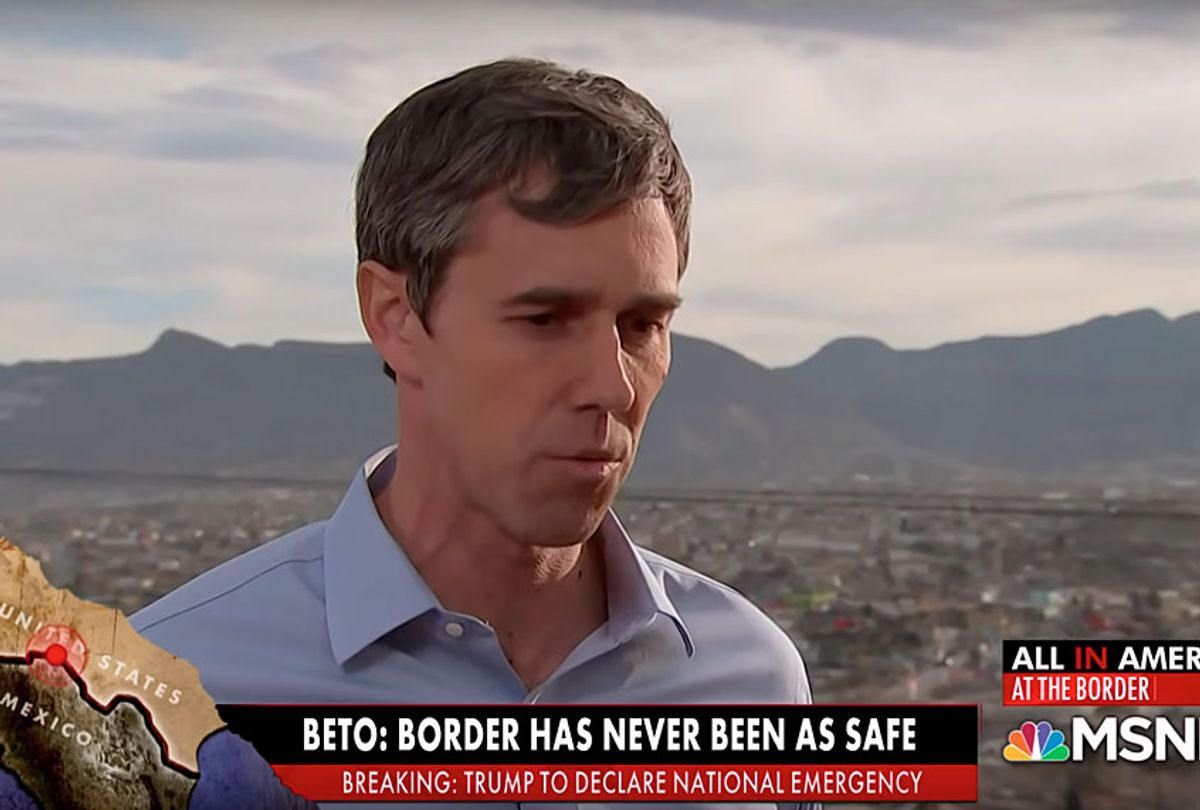 Former Democratic Rep. Beto O'Rourke continued to denounce President Donald Trump's hardline message on immigration, revealing Thursday that he would take down existing walls at the U.S.-Mexico border if he was able.

O'Rourke, who represented the border city of El Paso in Congress for six years until he fell short in his campaign against Republican Sen. Ted Cruz in the Texas Senate race during the midterms, told MSNBC'S Chris Hayes, "Yes. Absolutely. I'd take the wall down."

His comment came in response to a question posed on Twitter by Rep. Dan Crenshaw, R-Texas, a newly-elected member of Congress who has expressed support for Trump's proposed wall.

"If you could snap your fingers and make El Paso's border wall disappear, would you?" Crenshaw asked on Twitter, noting that fencing and other border barriers have caused illegal crossings to drop significantly.

O'Rourke told Hayes he would take down existing fencing at the southwestern border, adding that barriers do not bring Americans greater security.

"The border has never been as secure as it's been now," O'Rourke said, noting that cities like El Paso, his hometown, are among the safest in the country because of their strong immigrant presence, as several studies have concluded.

The president has repeatedly — and incorrectly — cited El Paso as an example of a city where building a wall had worked to deter crime.

"The border city of El Paso, Texas, used to have extremely high rates of violent crime — one of the highest in the country — and considered one of our nation's most dangerous cities," Trump said during his State of the Union address earlier this month. "Now, with a powerful barrier in place, El Paso is one of our safest cities."

In fact, before the border barriers were installed in El Paso in 2008, the city "had the second-lowest violent crime rate among more than 20 similarly sized American cities," the New York Times reported. El Paso's crime rate stayed the same in 2010, after the fence construction, and it was never considered one of the most dangerous cities in the country.

O'Rourke rebuked Trump's claims on Thursday, telling Hayes, "Here's what we know: After the Secure Fence Act, we have built 600 miles of wall and fencing on a 2,000 mile border. What that has done is not in any demonstrable way made us safer."

"It's cost us tens of billions of dollars to build and to maintain, and it has pushed migrants and asylum seekers and refugees to the most inhospitable — the most hostile stretches — of the U.S.-Mexico border, ensuring their suffering and deaths," he continued. "More than 4,000 human beings — little kids, women and children — have died. They're not in cages. They're not locked up. They're not separated. They're dead."

"Over the last ten years, as we have walled off their opportunity to legally petition for asylums across, in urban centers like El Paso to be with family, to work jobs, to do what any human being should have a right to be able to do — what we would do if faced with the same circumstances they were," he added.

Trump hosted his first campaign rally of the year on Monday in El Paso, where he attempted to rally support for a a border wall to stop what he has called "an urgent national crisis" at "our very dangerous southern border," which he claimed, without evidence, has led to a surge of crime, drugs and human trafficking caused by migrants seeking illegal entry.

At the same time, O'Rourke, held an event at a high school located about a half-mile away from Trump's rally, where he provided a counter argument to Trump's hardline message on immigration, declaring that "walls end lives."

Speaking in front of thousands within sight of the El Paso County Coliseum, where Trump hosted his first "Make America Great Again" event of the year, O'Rourke, who is expected to throw his hat in the ring for 2020, delivered an energized speech and outlined his vision for immigration reform, which includes a pathway to citizenship for so-called Dreamers and other undocumented immigrants and urging the country to welcome asylum seekers.

Trump, for his part, declared a national emergency at the U.S.-Mexico border Friday in order to access billions of dollars in funds that Congress refused to appropriate for the construction of his long-promised wall. He said that declaring a national emergency is "a great thing to do" because, he claimed, the United States has "an invasion of drugs, invasion of gangs, invasion of people," which he characterized as a grave threat to national security. The president alleged the "tremendous amounts of drugs flowing into our country" are "coming from the southern border."

Friday's announcement follows the passage of a 1,169-page bipartisan spending package that includes $1.375 billion for 55 miles of new border fences — a snippet of the $5.7 billion Trump has sought for more than 200 miles of steel walls along the southwestern border. The decision came after the commander-in-chief said he was not pleased with a bipartisan agreement reached by Congress earlier this week to avert a second government shutdown over border security and immigration.

Trump on Friday also signed the spending package to prevent a government shutdown. Democrats have vowed to take immediate action to block Trump's national emergency declaration through legislation and lawsuits.