O'Rourke spoke within sight of the El Paso County Coliseum, where Trump hosted his first rally of the year 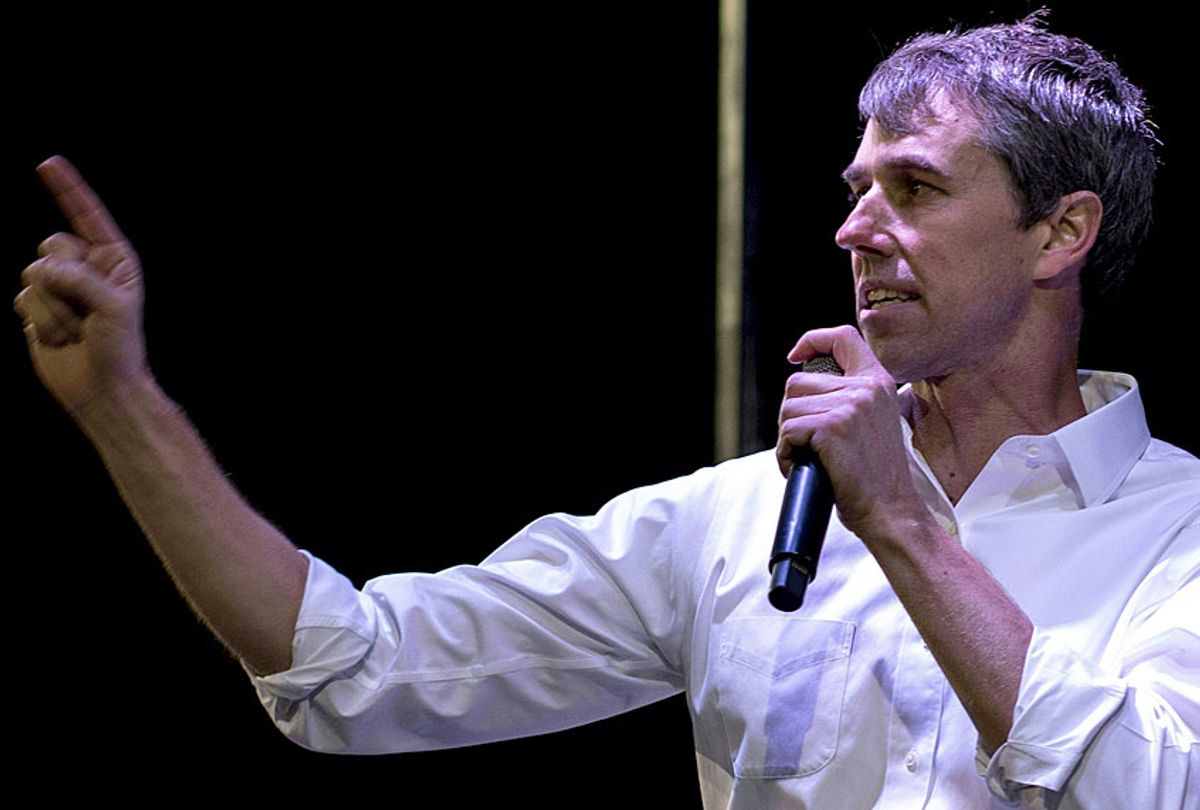 Former Texas Congressman Beto O'Rourke speaks to a crowd of supporters at Chalio Acosta Sports Center at the end of the anti-Trump 'March for Truth' in El Paso, Texas, on February 11, 2019. (Getty/Paul Ratje)
--

Speaking in front of thousands within sight of the El Paso County Coliseum, where Trump hosted his first campaign rally of the year, O'Rourke delivered an energized speech that recalled his unsuccessful U.S. Senate campaign, where he emerged as something of a national phenomenon along the way, drawing comparisons to former President Barack Obama for his speaking style and bipartisan message of hope and unity. Amid wide expectation that he will throw his hat in the ring for 2020, O'Rourke outlined his vision for immigration reform, which includes a pathway to citizenship for so-called Dreamers and other undocumented immigrants and urging the country to welcome asylum seekers.

Trump, for his part, took the stage a half-mile away at a "Make America Great Again" event to make another public demand for his $5.7 billion "wall" that would stop what he has labeled "an urgent national crisis" at "our very dangerous southern border." Without offering evidence, Trump blamed a surge of crime, drugs and human trafficking on migrants seeking illegal entry. Similar requests led to the longest government shutdown in American history shortly before the Christmas holiday. (Right before Trump took the stage in El Paso, news broke that congressional lawmakers had reached a deal to avert a partial government shutdown over border spending.)

In sharp contrast to Trump's dark narrative about the dangers of undocumented immigrants, O'Rourke painted a vibrant vision of the border zone. He noted that migrants are statistically less likely to commit crimes than people born in the U.S., as several studies have concluded and pointed out that cities like El Paso, his hometown, are among the safest in the country because of their strong immigrant presence.

"In El Paso, we are secure because we treat one another with dignity and respect. That is the way that we make our communities and our country safe," O'Rourke said at the event. "We know that walls do not save lives. Walls end lives."

The speech marked O'Rourke's first foray onto the national stage since he fell short in his campaign against Republican Sen. Ted Cruz in the Texas Senate race during the 2018 midterm election cycle. O'Rourke, who represented El Paso in Congress for six years, remains one of the most high-profile Democrats yet to officially forge a White House bid. He has maintained a low profile since the midterms, even as other Democrats announce their candidacies. O'Rourke's near-silence, in turn, had swirled speculation that his interest in a possible presidential bid might have dimmed. If he runs, he would likely face competition for the Democratic nomination from what is expected to be a very crowded Democratic field that already includes California Sen. Kamala Harris, New Jersey Sen. Cory Booker, Hawaii Rep. Tulsi Gabbard and former secretary of Housing and Urban Development Julián Castro. Over the weekend, Sens. Elizabeth Warren (D-Mass.) and Amy Klobuchar (D-Minn.) formally jumped in the 2020 race — and these names are far from the complete list.

Although O'Rourke said during his Senate campaign that he did not have Oval Office aspirations, he admitted at a town hall late last year that his position had changed from what he said on the campaign trail and that he and his wife had "made a decision not to rule anything out."  By signaling that he is even open to throwing his hat in the ring for 2020, however, O'Rourke has continued to generate buzz and speculation in the sprawling field of prospective Democratic candidates for 2020. In an interview last week with Oprah Winfrey, O'Rourke revealed he will make a decision about throwing his hat in the ring before the end of February — a remark he reiterated to supporters who shouted the question at him during Monday's event.

The dueling rallies provided a significant preview of a possible 2020 presidential contest between Trump and O'Rourke. With Trump's visit to his hometown, O'Rourke got an opportunity to demonstrate what his candidacy would bring to the table.

Trump addressed the lawmaker's competing event before boarding Air Force One, telling reporters that he had a "very long" line at his rally and that while O'Rourke had one too, "it's a tiny, little line."

The president doubled down on his calls for a wall on Monday, telling the crowd that his plans along the Rio Grande separating the U.S. and Mexico were already moving forward.

Trump falsely cited El Paso during his State of the Union speech on Tuesday as an example of a city where building a wall had worked to deter crime.

"The border city of El Paso, Texas, used to have extremely high rates of violent crime — one of the highest in the country — and considered one of our nation's most dangerous cities," Trump said. "Now, with a powerful barrier in place, El Paso is one of our safest cities."

Across the street, O'Rourke and the mayor of El Paso, Dee Margo, disputed Trump's statement. "The U.S. cities of the Mexican-American border are much safer than the US cities in the interior of the United States of America,” he said.

O'Rourke is correct. Before the border barriers were installed in El Paso in 2008, the city "had the second-lowest violent crime rate among more than 20 similarly sized American cities," the New York Times reported. El Paso's crime rate stayed the same in 2010, after the fence construction, and it was never considered one of the most dangerous cities in the U.S.

It was those remarks, along with Trump's decision to hold a campaign rally in the Texas border city, that spurred more than 50 civil rights and advocacy groups to sponsor the rally where O'Rourke delivered his final address.

"Trump's fixation on a border wall and his distortions of life in El Paso and along the border are unacceptable," march organizers wrote on a Facebook page for the event. "Our communities will always stand to include immigrants, oppose racism, and defend the truth. All of us must make a choice about whether we stand up for the truth or allow Trump to degrade our dignity and rights."

O'Rourke's rally began with a one-mile march down the border. Organizers estimated the crowd numbered 7,000 at its peak, citing law enforcement figures. In a news release announcing Monday's event, O'Rourke's team cast the protest as an effort to "show the country the reality of the border — a vibrant, safe, binational community that proudly celebrates its culture, history, diversity and status as a city of immigrants."

"We are making a stand for truth against lies and hate and ignorance and intolerance," O'Rourke said. "We are going to show the country who we are. We're going to make a stand to ensure that we live up to our promise, to our potential, to our purpose as a country."