Turns out the no-host option worked just fine. But the voters still can't resist making lazy choices at the top 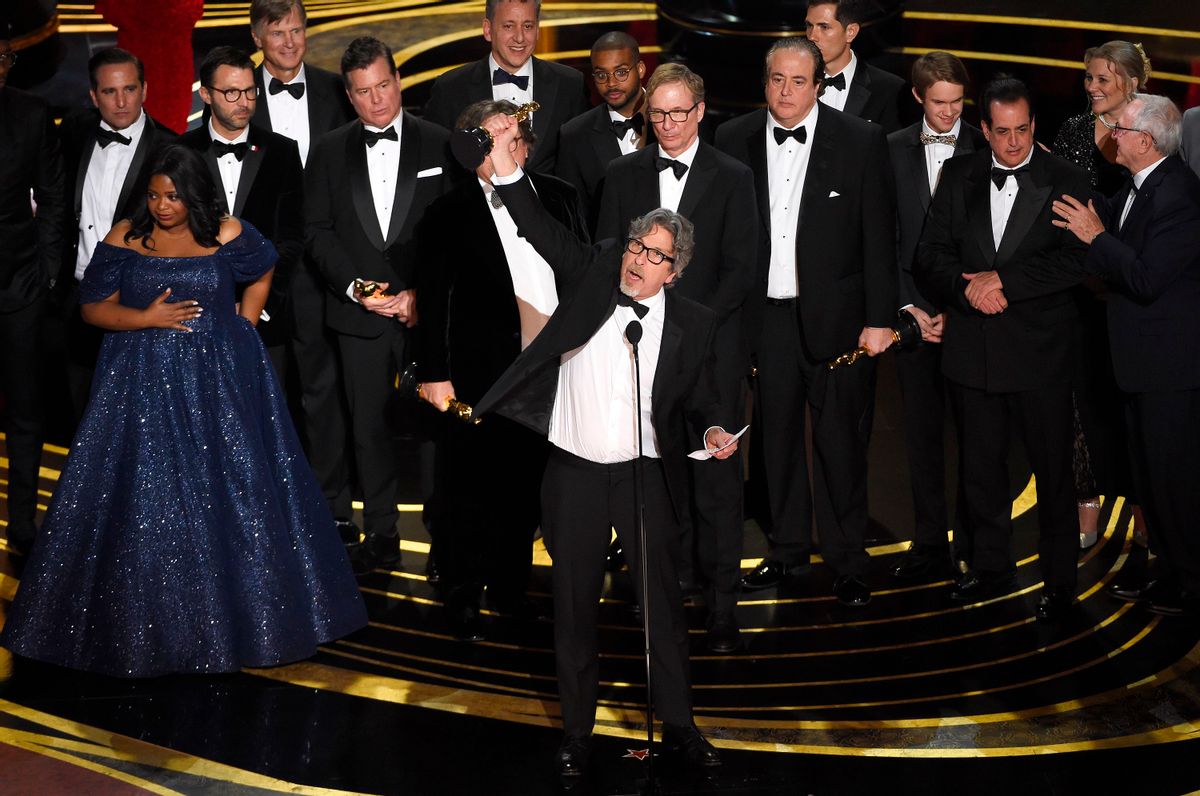 Peter Farrelly, center, and the cast and crew of “Green Book” accept the award for best picture at the Oscars. (Chris Pizzello/Invision/AP)
--

Leave it to the Academy of Motion Picture Arts and Sciences to construct something beautiful and full of hope, only to stomp all over it at the very end like a sugar-shocked toddler wearing a Godzilla suit.

Truly the 2019 Oscars was going quite well, demonstrating that a host-less awards ceremony doesn’t have to be rudderless. Without a wrangler, the telecast only ran 18 minutes over and rarely dragged. For the most part this year's awards show deserves praise for what it welcomed instead overall, which is a real sense of diversity.

This refers to more than just the cultural makeup of the line-up of presenters and nominees for the 91st Academy Awards ceremony, whose ranks were more inclusive in that respect than ever. Jason Momoa was paired Helen Mirren, and the lady joked about each being in pretty in pink.

Rage Against the Machine’s Tom Morello introduced “Vice," and Trevor Noah got to talk about “Black Panther” and land a Mel Gibson joke along the way.  ("Mel Gibson came up to me and said, ‘Wakanda Forever.’ He said another word after that, but the Wakanda part was nice.”)

Keegan-Michael Key dropped in from above, Mary Poppins style,  to introduce “The Place Where Lost Things Go” from the film "Mary Poppins Returns,"; it was sung by Bette Midler, whom Key introduced as The Divine Miss M.

Awkwafina and John Mulaney were a charming duo. Javier Bardem, with Angela Bassett at his side, declared in Spanish, “There are no borders or walls that can restrain ingenuity and talent. In any region of any country of any continent, there are always great stories that move us.”

For once, Oscars made a conscious effort not to be #SoWhite.

“Period. End Of Sentence,” a film about menstruation rights, won Best Documentary Short Film, for goodness sake. What more could we want?

Rather, it’s more about what a fair share of people didn’t want. The whole shebang was all going swimmingly until the last minute, when “Green Book” took home the Oscar for Best Picture — not surprising from a body of voters that gave the top award to “Crash” in 2004.

And in all honesty, the majority of viewers will see this as a cherry topping an Oscars production that demonstrates progress — which, as I have written before, is an ongoing problem.

The “Green Book” win is a predictable one, mind you.

Academy voters tend to reward “serious” films with touchy-feely social justice messages that aren’t difficult to decode, and speak in simplistic ways about race and injustice to the widest mainstream audience without making the average moviegoer person feel bad about themselves. “BlacKkKlansman” reminds people that the Klan is a thing, and nobody likes to see those pointy white hoods. “Black Panther” is a forward-looking view at the possibility within a land that escaped the history and ramifications of colonization. To stodgy Academy voters, it’s still a superhero movie.

In addition to Best Picture, “Green Book” earned statues for Best Original Screenplay and a Best Supporting Actor Oscar for Mahershala Ali. Regina King’s Supporting Actress win for “If Beale Street Could Talk” was worlds more satisfying; she paid homage to her mother for pouring love into her and nurturing her talent, while Ali looked visibly uncomfortable on stage, seeming to explain himself as he said he was “just trying to capture Dr. [Don] Shirley’s essence. “

Or maybe he had some notion of how the rest of the “Green Book” team would react to winning for a movie about a black man's experience with racism that centers whiteness. Not a one mentioned Victor Hugo Green, the author of the actual “Green Book,” in their acceptance speech. And when Farrelly accepted the statue for Best Picture, he was quick to say, “It all started with Viggo [Mortensen],” thanking Ali at some point afterward. There was no mention of Dr. Shirley by him or producers Jim Burke and Charles B. Wessler, but they were careful to thank Steven Spielberg and the late Carrie Fisher, alongside fellow executive producer Octavia Spencer.

Cuarón’s “Roma” won Best Foreign Language film and Best Cinematography, and he beat out Spike Lee, among others, to nab Best Director. This, too, feels like a win doubling as a political statement. “Roma,” as Cuarón points out, is centered on an indigenous woman, a member of a population typically ignored and exploited. It’s also a film about Mexico and its people, making it the kind of socially relevant statement Academy voters highlight in fraught times such as these without specifically having a host deliver jokes about walls and fake states of emergency.

Nevertheless Lee did not hide his disappointment at this development. Lee has been nominated all of five times, over more than three decades mas a filmmaker, three of those times for “BlacKkKlansman.” Only on Sunday night did he enjoy his first win for Best Adapted Screenplay, sharing that honor with fellow writers David Rabinowitz, Charlie Wachtel and Kevin Willmott, but taking up all the allotted time to make an acceptance speech.

Heartening wins abounded even so. “Free Solo” winning Best Documentary and “Bao” scoring an Oscar for Best Animated Short were both uplifting, and when Domee Shi told geeky girl artists to follow their dreams, it was one of those moments that made you believe.

The same was true of Hannah Beachler, the first African American to be nominated in the category of production design (alongside Jay Hart, who has been nominated twice before), who shared a speech about her experience working on the film enabling her to stand on the stage with a sense of greater agency and a sense of self-worth.

Costume designer Ruth E. Carter, who got her start working on Lee’s “School Daze,” spoke with gratitude about her pride at shaping the empowered way women look and lead onscreen. All of this felt on-message for this particular Academy Awards celebration.

In truth, Oscars has done a lot worse in the past, both in terms of its winners list and the telecast itself, although it may not have looked that way at first. The no-host option allowed the Academy to shield itself from seeming overtly political in its telecast, although Lee’s speech certainly was, as were the wins for “Roma,” “Black Panther” and the victory for “Spider-Man: Into the Spider-Verse,” starring an Afro-Latinx superhero, in the Best Animated Feature category.

The opening rock performance featuring Queen with Adam Lambert stepping into the Freddie Mercury role was an interesting choice, and their medley of selections made five minutes last for quite a while.

More engaging, and aptly timed out, were Maya Rudolph, Tina Fey and Amy Poehler opening the event by telling a few jokes and reminding the audience that they were not hosting while simultaneously making us wish they had and wonder why they weren’t.

Ultimately, though, it was fine that neither they nor anyone else did — although it does make us wonder why, following the Kevin Hart controversy, no significant effort seemed to be publicized about seeking out a woman, the Whoopi-as-surprise-host rumor notwithstanding.

Without the burden of playing to the host’s performance, directing the cameras to search for audience reactions to flat bits and allowing space for random flubs or misfires, the telecast instead relied upon the performers to entertain — you know, playing to their strengths.

Inviting actors and singers to work on the entertainment industry’s annual bacchanalia of self-congratulation was not a heavy lift, as it turns out. Brian Tyree Henry joined Melissa McCarthy onstage wearing an elaborate gown meant to parody the opulent costumes in “The Favourite.” As much as he looked like a kooky Disney version of a dowager countess, his get-up had nothing on McCarthy’s: Hers, highlighted by a long train festooned by stuffed bunnies, including a puppet she carried and spoke with while introducing the category, stole the show — even though the Best Actress nominee would eventually lose to “The Favourite” star Olivia Colman.

The evening’s crowning spectacle, of course, was Bradley Cooper’s and Lady Gaga’s live performance of “Shallow” from  “A Star is Born,” which went on to win the Oscar for Best Song. Gaga’s tearful speech was one of those moments tailored for Oscar night, but their passionate stage performance inspired chills.

These moments and others exemplify what happens when an awards show calls attention to the art, craft and passion for the form it is intended to reward as opposed to leaning upon the showmanship of a central entertainer. Even Julia Roberts, the presenter for Best Picture, understood this.

"Well, apparently, that wraps up the 91st Academy Awards," she said to close the event, capping an evening that was mostly satisfying but, at the very end, typically Oscar.