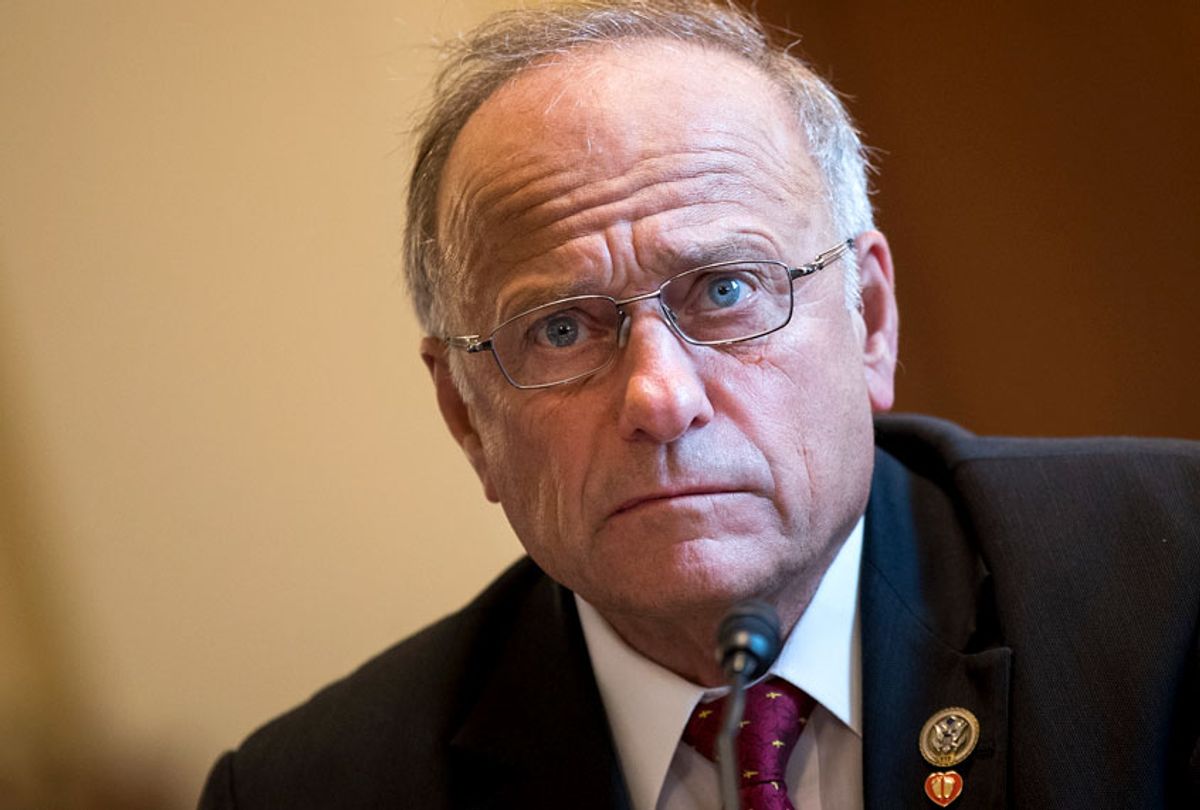 Rep. Steve King, R-Iowa, the most overtly racist member of Congress, refused to say if he thinks white societies are superior to others when questioned by a woman during a town hall meeting in Iowa on Tuesday.

"Do you think a white society is superior to a nonwhite society?" Mary Lavelle asked King, according to the New York Times. Lavelle was reportedly "testing" the congressman's long history of making comments that suggest empathy toward white nationalism and other racist points of view.

"I don't have an answer for that. That's so hypothetical," King answered. "I'll say this: America is not a white society. It has never been a completely white society. We came here and joined the Native Americans."

"I've long said that a baby can be lifted out of a cradle anywhere in the world and brought into any home in America – whatever the color of the folks in that household – and they can be raised to be American as any other," he reportedly continued. "And I believe that every one of us – every one of us – is created in God's image."

Lavelle told the Times she asked the question because she is worried that the anti-immigrant rhetoric used in a manifesto written by the suspect in the mosque shooting in Christchurch, New Zealand mirrored language King has used in the past, prompting renewed concern about the congressman's rhetoric. King's answer, however, may have done little to ease those anxieties – and it comes just two months after the nine-term lawmaker with a documented record of racist comments was publicly rebuked by members of his own party.

House Republican leaders stripped King of his committee assignments in Congress in January for remarks he made in defense of white supremacy in a New York Times profile. He asked the newspaper, "White nationalist, white supremacist, Western civilization — how did that language become offensive?" King did not deny making the comments to the Times, although he insisted in a follow-up interview he rejects both white nationalism and white supremacy.

In the wake of King's apparent defense of white supremacy, several powerful Republican Party leaders, including Senate Majority Leader Mitch McConnell of Kentucky and Rep. Liz Cheney of Wyoming, the No. 3 House Republican, suggested he should resign and the House of Representatives overwhelmingly passed a resolution disapproving of King's remarks.

King again came under intense scrutiny on Monday after a meme posted on his Facebook page asked who would win a second civil war between red states and blue states.

"Folks keep talking about another civil war; one side has about 8 trillion bullets while the other side doesn't know which bathroom to use," the post read. It has since been deleted.

King's use of social media has previously attracted negative attention. During the 2016 election, the lawmaker expressed support for far-right politicians, including Hungary's far-right prime minister Victor Orbán — an outspoken white nationalist who has argued for a ban of non-white immigration to his country — and the Dutch politician Geert Wilders.  In June 2018, King retweeted a statement from well-known British Nazi sympathizer Mark Collett, who was a subject in the 2002 documentary, "Young, Nazi and Proud." The congressman defended his move by claiming he did not know about Collett’s affiliations. King refused to apologize for the tweet and stood by the sentiment of the comment, which falls in line with his hardline views on immigration and American nationalist ideas.