"It is clear the President has, at a minimum, engaged in highly unethical and unscrupulous behavior," Pelosi says 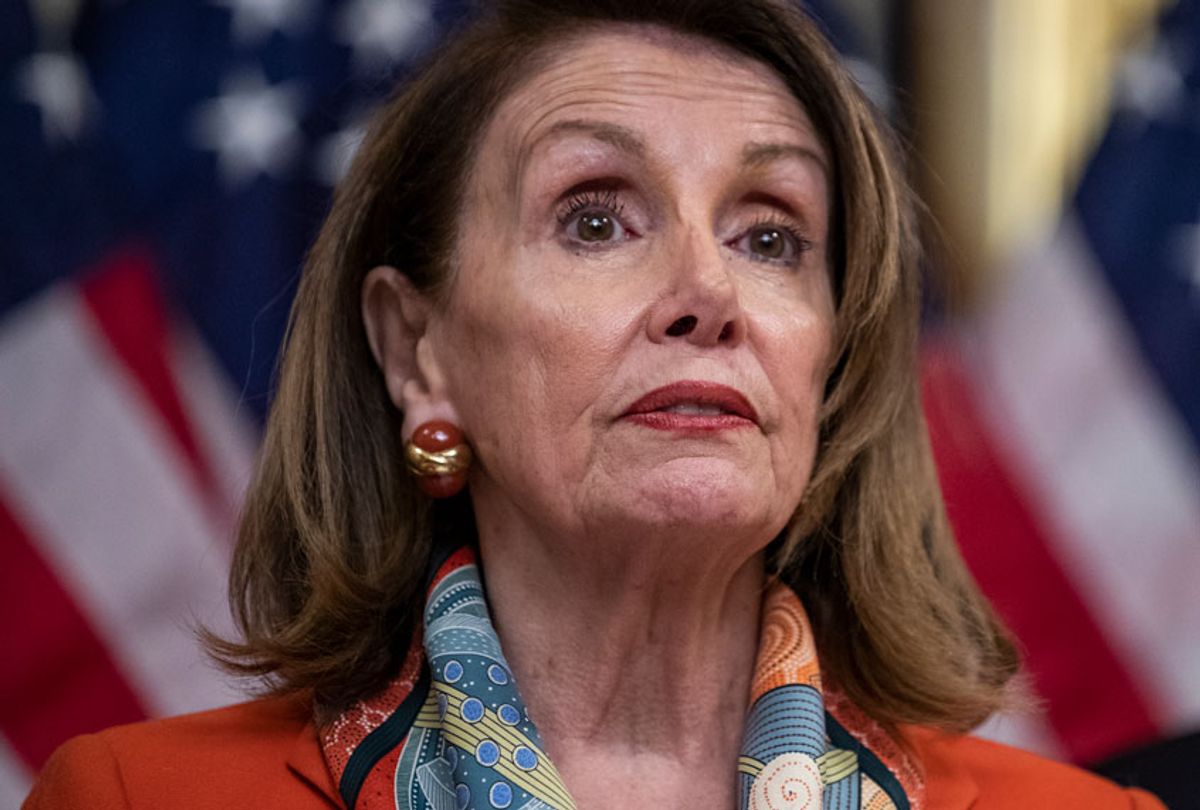 House Speaker Nancy Pelosi, D-Calif., directly acknowledged efforts to initiate impeachment proceedings against President Donald Trump in the wake of the release of a redacted version of special counsel Robert Mueller's report, which detailed his nearly two-year investigation into allegations of collusion between Trump's campaign and Russia during the 2016 presidential election and whether the president himself attempted to obstruct the probe.

"It is clear the president has, at a minimum, engaged in highly unethical and unscrupulous behavior," Pelosi said Monday in a letter sent to Democrats.

In his report, Mueller did not establish that Trump or any of his campaign aides had coordinated with Russia. He also did not reach a conclusion on whether Trump had obstructed justice, although he identified ten episodes of possible obstruction by the president — including previously unknown efforts in which he allegedly pushed former aides to undermine the special counsel's investigation.

The revelations from the special counsel's redacted report has "caused a public outcry for truth and accountability," Pelosi wrote in her letter.

"While our views range from proceeding to investigate the finding of the Mueller report or proceeding directly to impeachment, we all firmly agree that we should proceed down a path of finding the truth," she stated. "We must show the American people we are proceeding free from passion or prejudice, strictly on the presentation of fact."

Although he ultimately did not bring criminal charges against the president, some Democrats, including presidential contender Sen. Elizabeth Warren of Massachusetts, have already called for impeachment hearings.

Pelosi's letter signals a shift in her approach to impeachment. The California Democrat effectively took impeachment off the table last month when she said impeaching Trump was "just not worth it."

In recent months, most Democrats have appeared to defer questions about ousting Trump until Mueller's investigation concluded. But even as the special counsel last week disclosed at least ten times the president may have obstructed justice, the party's leadership has responded to Mueller's report with exceedingly cautious remarks about impeachment, demands for the special counsel's unredacted findings and calls for further hearings. Others have simply dodged the subject altogether.

Although top Democrats have mostly declined to comment on the possibility of impeachment in the fallout of Mueller's report, the progressive wing of the party has appeared eager to oust the president.

Rep. Rashida Tlaib, D-Mich., made headlines earlier this year when she said the incoming Congress is "going to impeach the motherf**ker," referring to Trump. After the attorney general released a four-page summary of the special counsel's investigation late last month, she even asked fellow Democrats to support a formal inquiry "into whether President Trump committed impeachable offenses."

In response to Mueller's report Thursday, Tlaib tweeted, "Everything outlined in the #MuellerReport is further proof of what I've been saying for a long time: it's #TimetoImpeach. The first step? The House Judiciary Committee launching an investigation into whether Trump committed impeachable offenses."

She then asked her colleagues to endorse the resolution she introduced last month, which calls on the Judiciary panel to probe whether the president is violating the Constitution. Fellow freshmen congresswoman Reps. Alexandria Ocasio-Cortez, D-N.Y., and Ilhan Omar, D-Minn., tweeted that they would be signing onto the resolution introduced by Tlaib.

Questions about whether they should impeach Trump in the fallout of Mueller's report will come to a head on Monday as Pelosi addresses the special counsel's findings in a conference call with her caucus. While it remains unknown whether Pelosi will bring up impeachment directly, the question of whether to initiate impeachment proceedings against Trump will likely be on the minds of many liberal lawmakers.

Still, removing Trump from office would be an uphill battle. Voting on articles of impeachment requires only a simple majority in the House, where Democrats have a majority. The president's case would then move to the Senate, where two-thirds of all senators would need to agree to convict the president on any count. If that happens, a president is automatically removed from office. At least twenty Senate Republicans would need to join Democrats and vote to remove the president, and it's unlikely enough GOP senators would vote as such. Following Mueller's report, a majority of Senate Republicans did not appear to be put off by the picture Mueller paints of Trump.

In recent days, Trump has claimed the special counsel's report to be a "total and complete exoneration," and pushed back against damning descriptions of his behavior in the 448-page document, saying they're "total bulls**t." In a tweet on Monday, the president argued he cannot be removed from office unless he is charged with a crime.

"Only high crimes and misdemeanors can lead to impeachment. There were no crimes by me (No Collusion, No Obstruction), so you can't impeach," he wrote.

Pelosi appeared to target the president's declaration directly in her letter.

"Whether currently indictable or not, it is clear that the president has, at a minimum, engaged in highly unethical and unscrupulous behavior which does not bring honor to the office he holds," she said. "It is also clear that the congressional Republicans have an unlimited appetite for such low standards. The GOP should be ashamed of what the Mueller report has revealed instead of giving the president their blessings."