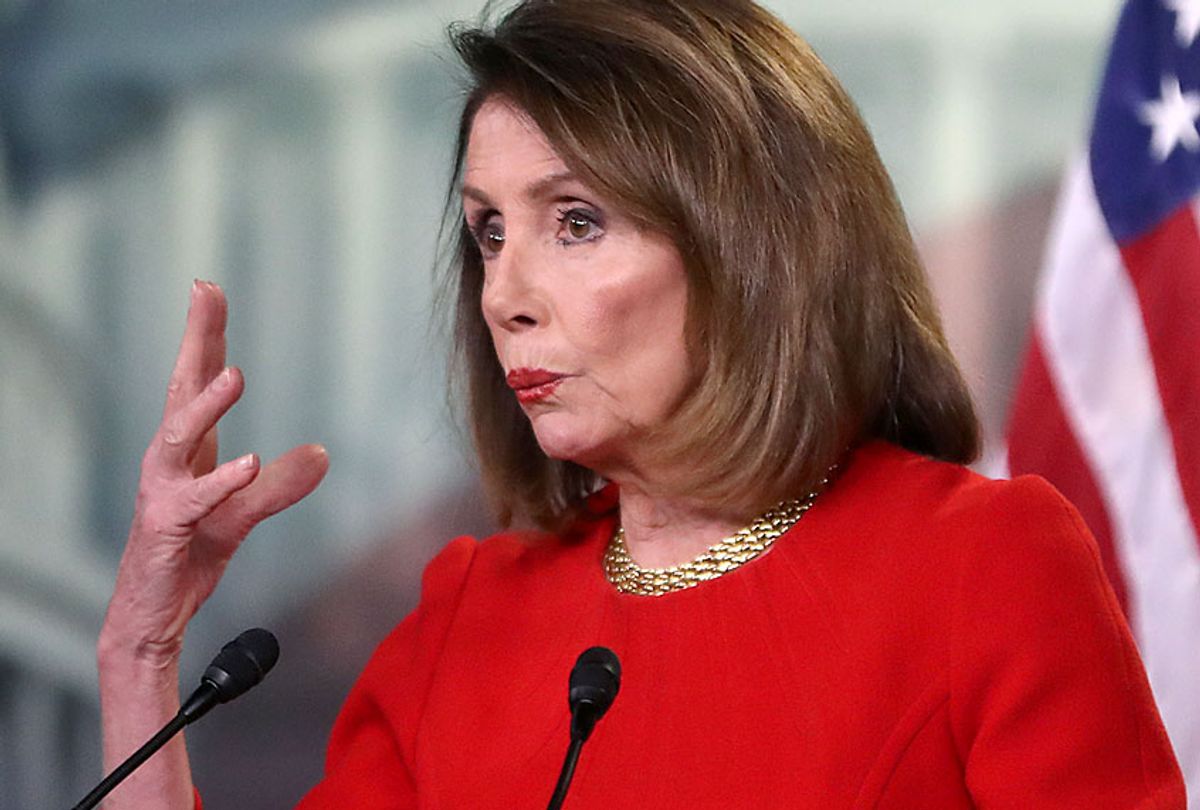 Speaker of the House Nancy Pelosi (D-CA) speaks during her weekly news conference at the U.S. Capitol April 4, 2019 in Washington, DC. (Getty/Mark Wilson)
--

In a conference call with rank-and-file members, Pelosi reportedly made clear that the party's strategy in the wake of the public release of a redacted version of special counsel Robert Mueller's report was to focus on aggressively investigating the president and see where its various wide-ranging probes lead.

"We don't have to go to articles of impeachment to obtain the facts, the presentation of facts," she added.

The call marked the first time House Democrats have discussed as a unit since last week's release of the Mueller report, which detailed his nearly-two year investigation into allegations of collusion between Trump's campaign and Russia during the 2016 presidential election and whether the president himself attempted to obstruct the probe. Congress has been out of session for a two-week recess over the Easter and Passover holidays.

The call came just hours after Pelosi argued in a letter to her colleagues that while Democrats "should proceed down a path of finding the truth," it is "important to know that the facts regarding holding the president accountable can be gained outside of impeachment proceedings."

"Whether currently indictable or not, it is clear that the president has, at a minimum, engaged in highly unethical and unscrupulous behavior which does not bring honor to the office he holds," she wrote.

Although Pelosi would not commit to initiating impeachment proceedings, seemingly concerned that it would cause political blowback for the party, her comments to lawmakers Monday signaled a shift in her approach to the issue. The California Democrat had effectively taken impeachment off the table last month when she said impeaching Trump was "just not worth it."

Although Pelosi urged cautiousness in her letter and during her call with lawmakers, some Democrats reportedly expressed support for impeachment.

"As a 27-year law enforcement officer, and while I understand we need to see the full report and all supporting documents, I believe we have enough evidence now," Demings said.

Rep. Jared Huffman, D-Calif., said, "It's bad for the country if Congress punts. I think the script has flipped on political calculations. It's far harder to defend inaction in the face of what we know."

Mueller, in the 448-page redacted report released last week, did not find that Trump's campaign conspired with Russia to interfere in the 2016 presidential election, although identified ten episodes of possible obstruction of justice by the president.

Although top Democrats have responded to Mueller's report with exceedingly cautious remarks about impeachment, demands for the special counsel's unredacted findings and calls for further hearings, the progressive wing of the party has appeared ready to oust the president.

Sen. Elizabeth Warren, D-Mass., on Friday became the first 2020 presidential hopeful to call on the House of Representatives to start impeachment proceedings against Trump. Reps. Alexandria Ocasio-Cortez, D-N.Y., and Ilhan Omar, D-Minn., said they would sign onto an impeachment resolution introduced by Rep. Rashida Tlaib, D-Mich.

"I believe Congress should take the steps towards impeachment," Harris said during a town hall broadcast on CNN. "But I want to say this, because it doesn't end there. I also want to say this: I'm also a realist . . . Since I've been in the United States Senate, that the United States Senate and the Republicans hold the majority, I've not seen any evidence to suggest that they will weigh on the facts instead of on partisan adherence to being protective of this president. And that's what concerns me, and what will be the eventual outcome. We have to be realistic about the end result, but that doesn't mean the process should not take hold."

As Democrats remain divided about whether they should impeach Trump in the fallout of Mueller's report, they will consider the challenges that removing the president from office would entail.

While voting on articles of impeachment requires only a simple majority in the House, where Democrats have a majority, the president's case would then move to the Senate, where two-thirds of all senators would need to agree to convict the president on any count. If that happens, a president is automatically removed from office. At least twenty Senate Republicans would need to join Democrats to vote to remove the president, and it's unlikely enough GOP senators would vote as such. Following Mueller's report, a majority of Senate Republicans did not appear to be put off by the picture Mueller paints of Trump.