Major "Game of Thrones" lesson: In Westeros, women get the job done

In Westeros men are presumed rulers. These finale episodes show how hard must women work to win the day 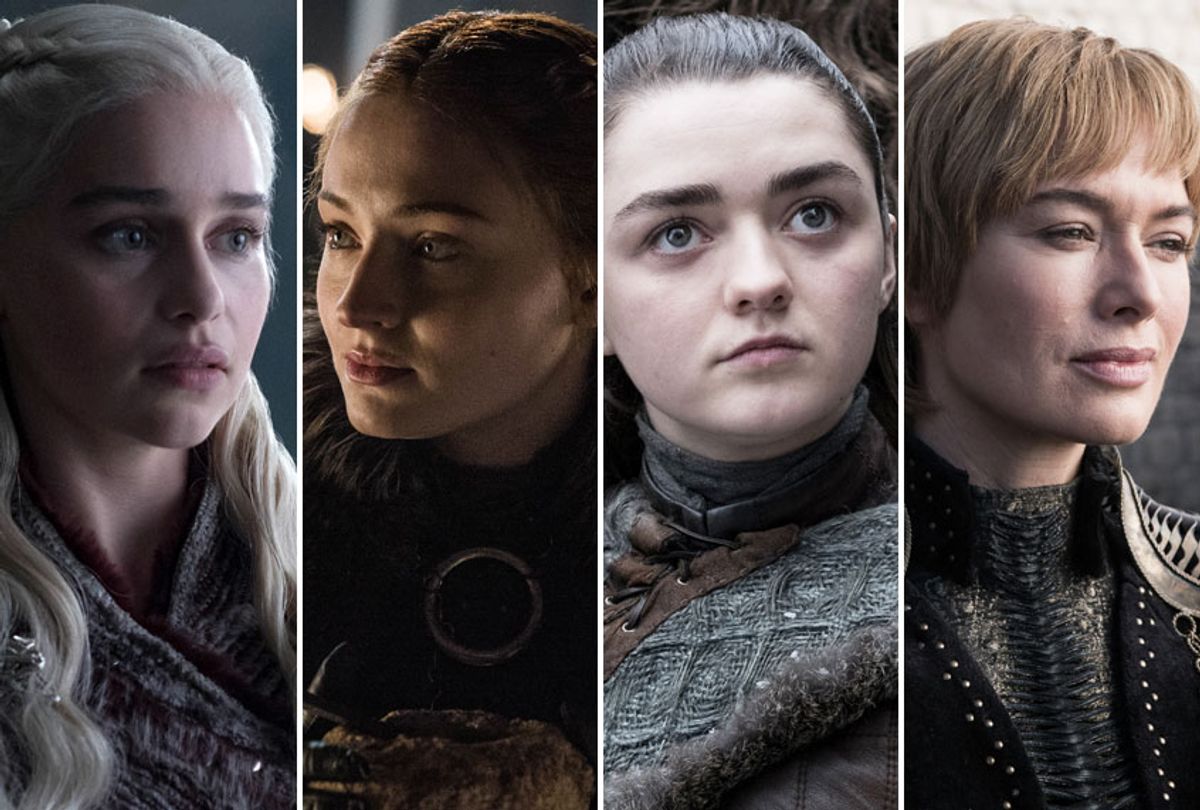 If you’re scanning the “Game of Thrones” back catalogue to see how the plot evolved to a place where, with three episodes left, four of the five most politically influential people in Westeros happen to be women, allow me to suggest a re-watch of the third season episode titled “And Now His Watch Is Ended.”

Within this episode Arya Stark (Maisie Williams) begins to see the lunacy in trusting in any divine plan to mete out justice — a smaller step on the path that led her to Winterfell’s godswood, admittedly. The hour also provides a wistful view of a younger Sansa (Sophie Turner), betrayed by the Lannisters but still waiting for somebody, anybody to save her.

But the exchange most worth reviewing is one between Cersei Lannister (Lena Headey) and Tywin Lannister (Charles Dance). It puts into words how this world of men views the role of women.

At this point in the long game Tywin has effectively taken over the realm, wresting the title of Hand of the King away from his son Tyrion (Peter Dinklage), whom Tywin has detested since the day he was born. Jaime is a captive of the North, leaving Cersei to sit with her father on the Small Council.

In a private conversation between father and daughter, Cersei attempts to make the case that it is she, not her brothers, who deserves Tywin’s confidence and trust. “Years and years of lectures on family and legacy —same lecture, really, just with tiny, tedious variations,” she tells him. “Did it ever occur to you that your daughter might be the only one listening to them, living by them? That she might have the most to contribute to your legacy that you love so much more than your actual children?”

If we know one truth about the Lannisters, it is that they’re only as honest as they’re required to be at any given moment. And you’d better believe Cersei’s gender played a role in his generally dismissive attitude towards her. Women, in the estimation of Tywin Lannister and that of most Westerosi noblemen, are there to secure alliances and birth heirs.

This is why he finds Olenna Tyrell (Diana Rigg) so irritating — in her, he has an adversary who cannot be intimidated or told what to do. Tywin is simply canny enough to keep that part of his opinion to himself.

Jump forward a few seasons, and Cersei is on the Iron Throne while Tywin is decomposing in his grave. So are her two sons — both boys who are given the throne by right of maleness as opposed to any demonstration that they’re fit to rule.  But Olenna Tyrell also is dead, because Cersei trusts other women as much as her father did.

Say what you will about Cersei and her duplicity with regard to her empty promise to aid the North in the war with the Night King, but she’s smart enough to keep her eye on the prize — the Iron Throne — and employ the necessary brutality to keep it. She knows that this how patriarchal power works and what it respects, especially the sort of structure that designs kingdoms and passes wealth and titles down through the males of each generation.

This is also why this finale season’s second and third episode developments relating the story’s A-list of women are so satisfying, despite what the Jon Snow bros might say.

What these episodes and others before them highlight are the flaws in a world that places more value in the idea of what champions are supposed to look like, as opposed to the actions of those who put in the time and training to rise up, surmounting all obstacles and get the job done.

Or, to paraphrase an observation the Queen of Thorns made about Renly Baratheon, the would-be ruler of the Seven Kingdoms, he was “gallant yes, and charming, and very clean. He knew how to dress and smile and somehow this gave him the notion he was fit to be king.” Of her own grandson, she says, “Loras is young and very good at knocking men off horses with his stick. That does not make him wise.”

What about Jon Snow (Kit Harington)? He's young and very good at knocking men down with his sword, too. The secret Targaryen also slammed into an obstacle the moment he was born. His uncle’s promise to hide his identity led to him being raised as a bastard, forcing him to make his bones as a man of the Night’s Watch and learn the importance of prioritizing the survival and worth of humankind over titles and honors.

Reluctant though he was to lead, chaos in the South forced him to. Being a man guaranteed him something of a track to herodom on top of that.

Whereas Arya, a tiny scruffy waif chasing cats and laughed off by men larger than she, killed several of those tormentors with her own hands before being fully trained to hunt more dangerous game. Jon died and was resurrected; Arya nearly died and bested an assassin hunting her before she was fully healed.

Nevertheless, as surely as Arya stuck the Night King with the pointy end in “The Long Night,” the decision to make the youngest daughter of Ned Stark the savior of Westeros was never going to be universally adored. Even Williams’s own boyfriend, according to her report, responded to the news that his boo would strike the killing blow to the series Big Bad with, “Mmm, should be Jon though really, shouldn’t it?”

But Jon was not in the godswood to pull off the coup de grace. Arya was.

Never mind the fact that the battle’s co-leader is a woman flying a gigantic fire-breathing dragon; it was supposed to be Jon.

Never mind that the Lady of Winterfell, Sansa Stark, was also armed with a dagger and leads her erstwhile husband Tyrion to safety when the Winterfell crypt comes alive with the dead. The very same Lady, don’t forget, whose side strategy won the day at The Battle of the Bastards — this after Jon refused to listen to her warnings, which all played out as she knew they would — and who is smart enough to know Cersei’s duplicity better than her own little brother does. If push came to shove, Sansa could have gotten a lucky strike in on the Night King. That said, Arya's move was all about skill. Luck had little to do with it, unless you count it as the answer to her prayer to the god of death: "Not today."

Don’t blame Williams’ bae too harshly for wanting Harington’s Jon to get the honor, since that’s what George R.R. Martin appears to have been hinting at by naming his series of books “A Song of Ice and Fire.” Jon is raised in the North and battle-hardened beyond the Wall; only late in the game does this son of colder climes discover he’s actually the legitimate heir of fire and blood.

Or rather, he’s legitimate by the same right that denies Brienne of Tarth (Gwendoline Christie) knighthood for most of her life, and assumes that Viserys Targaryen is the last dragon, before his little sister Daenerys (Emilia Clarke) outlives him and hatches three dragons. Which is to say, it is the sort of legitimacy is presumed by tradition.

Whereas Brienne, Arya, Sansa and Dany — and Cersei — all survive and defeat low expectations men, friend and foe, to get to the other side of The Battle of Winterfell. Daenerys’ constant need to flex her might is as built into her being as her heartbeat at this point, because she grew up swimming through those low expectations.

The final, thrilling minutes of “And Now His Watch Is Ended” shows her channeling her frustrations about the consistent low regard with which she’s viewed for the first time, in fact.

First she repays the slaver who thinks she’s just a dumb bimbo by barbecuing him alive and sacking his city and then, as the smoke is still rising off the charred remains of those who defied her, refusing to acknowledge Ser Jorah (Iain Glen), who sees her as a naïve flower he must protect up until this demonstration of her power. He looks up at her in awe and love; she stonily gazes in another direction and walks away from him. That, in a nutshell, is how the ladies must succeed at this game.

A few readers took umbrage of my observation in a previous “Game of Thrones” story that this series has a history of treating female characters poorly. One cites series creators David Benioff’s and D.B. Weiss’ insistence that this is a world of equal-opportunity cruelty, and going by George R. R. Martin’s rendering of Westeros, that’s true.

But this is still a series that spent many seasons using the sexual denigration and exploitation of its female characters as titillation. Not even Sansa’s rape centered her pain, choosing instead to focus on Theon Greyjoy (Alfie Allen), whom her abusive husband forced into watching.

It took legions of viewers calling out the producers and HBO on this practice for them to curtail it after season 5. But it still retains its adherence to the male gaze in a real way behind the camera: when the series ends, it will have employed one female director out of 19 and two female writers overall.

Although Westeros remains as far from egalitarian as one can imagine, at the very least we’ve reached a point where a few of the fictional women in charge are receiving what they’re due, having earned it not merely by surviving abuse, indignity and dismissal, but by wielding their intelligence and strategy, and when need be, backing it up with fire and blood. [It’s a shame little Lyanna Mormont (Bella Ramsey) didn’t make it, but it least she took a zombie giant with her. It underestimated the threat of a little girl.]

As my colleague Amanda Marcotte explains, signs and prophesies in this series are misdirects more often than they end up amounting to substantive outcomes. Instead, we should have been closely watching the signs the series has been dropping by way of the key moments meant to culminate in grand payoffs.

When pulled off successfully, a few of those moments tell you everything you need to know about the story’s various philosophies. In the coming episodes we may learn that Tywin Lannister was right about his daughter. Cersei has already made strategy mistakes that cost her dearly. One resulted her being forced to march naked and barefoot through the very city over which she holds power. But Cersei also learns quickly from her missteps and enacts subsequent strategies accordingly.

She is very much her father’s daughter, whereas Sansa, Arya and Daenerys are very different from the women their fathers once expected the to be. And in the end, this means by which all of them defy those expectations could be the difference between victory and death.