The Obama administration "sent the Kremlin the signal they could get away with almost anything," McConnell alleges 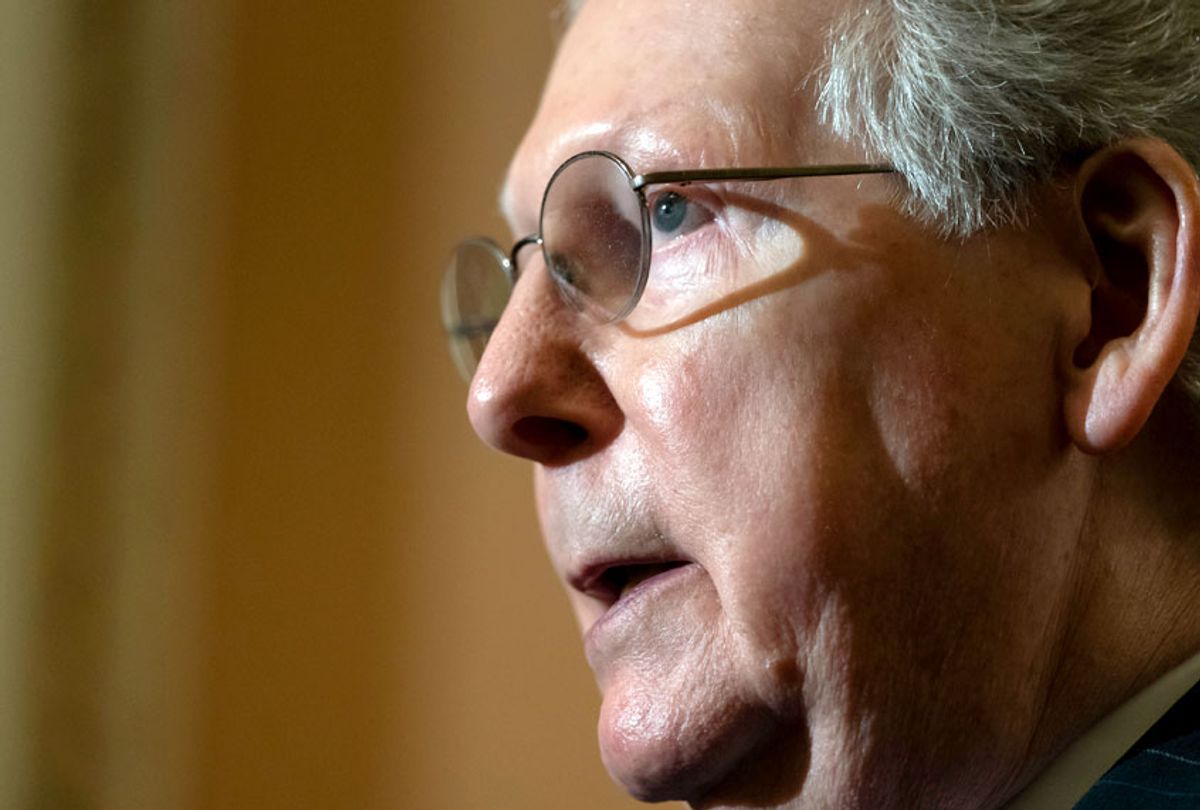 "Maybe stronger leadership would have left the Kremlin less emboldened. Maybe tampering with our democracy wouldn't have seemed so very tempting," McConnell said Tuesday on the Senate floor. "Instead, the previous administration sent the Kremlin the signal they could get away with almost anything."

He continued, "So is it surprising that we got the brazen interference detailed in special counsel Mueller's report?"

McConnell then pointed to several incidents he claimed showed the Obama administration had not been tough enough on Russia.

"I think many of us now see that President Obama's approach to Russia could have used some more of the 1980s — more Ronald Reagan and less Jimmy Carter," he added.

McConnell's Tuesday comments appear to echo Trump, who recently slammed his predecessor for allegedly doing "NOTHING" to stop Russian interference in the final months of the 2016 election.

The president also tweeted last month, "Anything the Russians did concerning the 2016 Election was done while Obama was President. He was told about it and did nothing!"

Trump spoke to Russian President Vladimir Putin by phone Friday for more than an hour and briefly discussed the findings of special counsel Robert Mueller's report into Russian interference in the 2016 presidential election, specifically "in the context of that it's over, and there was no collusion" between Moscow and Trump's presidential campaign.

McConnell on Tuesday appeared to reiterate Trump's remarks, arguing that it was time to move on from Mueller's investigation, which he declared "case closed." The senator issued a call to "finally end this 'Groundhog Day' spectacle, and to stop endlessly relitigating a two-and-a-half-year-old election result and move forward for the American people."

"This investigation went on for two years," McConnell said of Mueller's probe. "It's finally over. Many Americans were waiting to see how their elected officials would respond."

"With an exhaustive investigation complete, would the country finally unify to confront the real challenges before us? Would we finally be able to move on from partisan paralysis and breathless conspiracy theorizing?" he continued. "Or would we remain consumed by unhinged partisanship and keep dividing ourselves to the point that Putin and his agents need only stand on the sidelines and watch as their job is done for them?"

"Regrettably, I think the answer is obvious," he concluded.

Senate Minority Chuck Schumer, D-N.Y., responded to McConnell by saying the investigation was "not done." he further accused the majority leader of "whitewashing" the conclusions of Mueller's report in an attempt to "protect the president from accountability."

"He doesn't want to move on. He wants to run away," Schumer said of McConnell. "He wants to run away from these awful facts that relate to the wellspring of our democracy: foreign interference in our election and a president who is lawless."

Mueller's report, which Attorney General William Barr released in redacted form last month, detailed multiple contacts between the Trump campaign and Russia, although the special counsel said the evidence did not amount to criminal collusion or conspiracy. Mueller also identified ten episodes of possible obstruction by the president, indicating that "while this report does not conclude that the president committed a crime, it also does not exonerate him."

Barr, weeks before he released a copy of Mueller's report, revealed that Mueller decided to punt on whether Trump had obstructed justice. The attorney general then determined that Trump did not attempt to obstruct the investigation, claiming the special counsel's findings were "not sufficient to establish that the president had committed an obstruction of justice offense."

Democrats have criticized Barr's decision to not charge Trump with obstruction of justice, accusing him of acting as the president's personal sword and shield. Even some prosecutors who worked for Mueller claimed the attorney general did not adequately represent their findings, telling associates the report was more damning for Trump than Barr had indicated.

Barr defended his actions during a hearing before the Senate Judiciary Committee last week, in which he reiterated his belief that he and his deputy both agreed there was not enough evidence to establish an obstruction offense.

But on Monday, nearly 400 former federal prosecutors signed onto a letter asserting that Trump would have been charged with obstruction of justice if he were not the president. The former Justice Department officials who worked in every administration dating back to former President Eisenhower declared that the evidence of obstruction, as detailed in Mueller's report, would "satisfy all of the elements for an obstruction charge."

House Judiciary Committee Chairman Jerrold Nadler, D-N.Y., meanwhile, has subpoenaed the full, unredacted Mueller report and its underlying documents from Barr, who has not complied with the request. Nadler plans to hold a vote Wednesday on whether to hold Barr in contempt for failing to comply with the subpoena to provide lawmakers with the materials.

In addition to the full report, Democrats are demanding that Mueller testify to Congress about his nearly two-year investigation and subsequent conclusions. Trump on Sunday said that Mueller should not testify, claiming that Democrats only want the federal prosecutor to testify publicly because his probe did not reach the conclusions they had wanted.