Attorney General Barr jokes about contempt to House Speaker Pelosi: "Did you bring your handcuffs?" 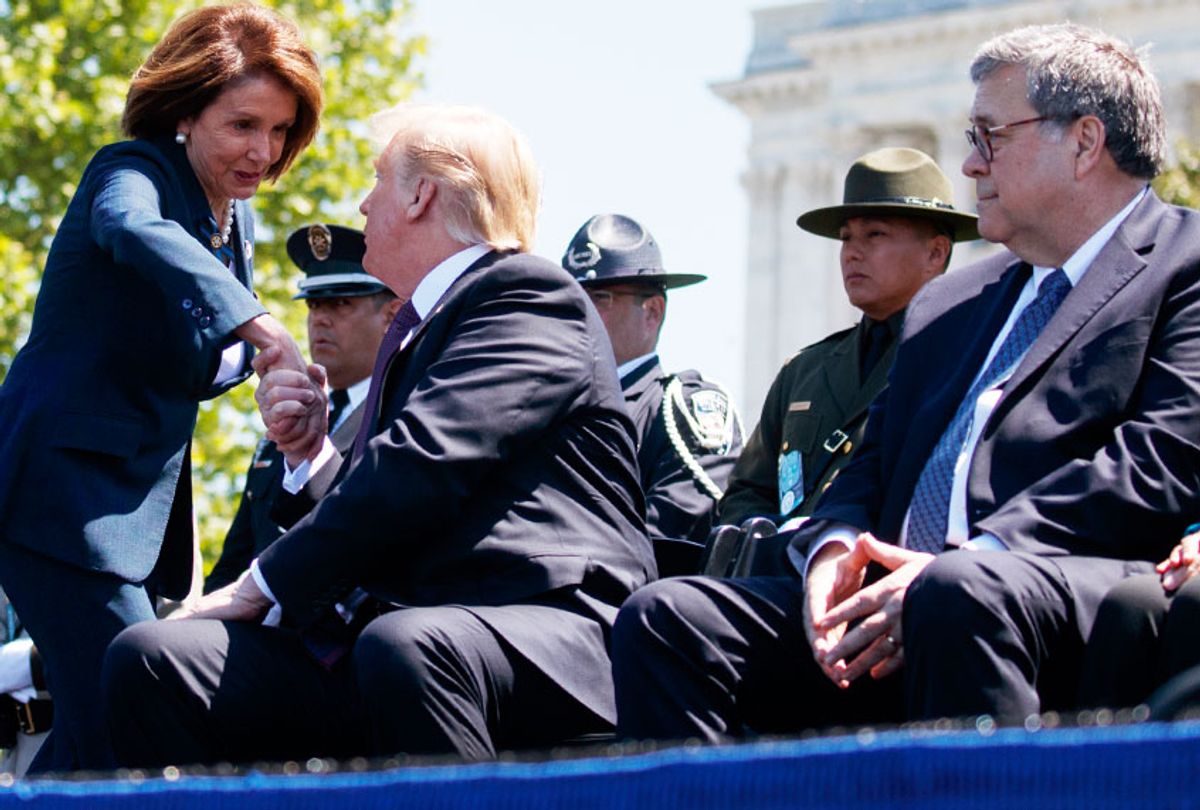 Attorney General William Barr looks on as President Donald Trump shakes hands with Speaker of the House Nancy Pelosi of Calif., during the 38th Annual National Peace Officers' Memorial Service at the U.S. Capitol, Wednesday, May 15, 2019, in Washington. (AP/Evan Vucci)
--

Attorney General William Barr reportedly cracked a joke Wednesday with House Speaker Nancy Pelosi, D-Calif., about being locked up at an event honoring slain law enforcement officers outside the West Front of the Capitol.

"Madam Speaker, did you bring your handcuffs?" Barr quipped to Pelosi, according to both the New York Times and the Washington Post.

Pelosi, whose Democratic caucus is preparing to hold Barr in contempt of Congress for failing to comply with a subpoena to provide lawmakers with special counsel Robert Mueller's full report into Russian interference in the 2016 presidential election, also joked last week that the House of Representatives still had "a little jail" it could put to use, if necessary.

In response to Barr's quip, Pelosi reportedly smiled and offered her own tongue-in-cheek retort, saying that the House sergeant-at-arms was in attendance should an arrest be necessary. Barr chuckled and walked away, according to the two news outlets.

The exchange comes amid escalating tensions between President Donald Trump's administration and House Democrats over investigations on issues including foreign election interference, alleged mismanagement in the White House security clearance procedures, the president's finances and his immigration policies. Democrats have accused the Trump administration of stonewalling or flat-out ignoring their requests for documents and information.

Since the Democrats seized control of the House of Representatives in January, the Trump administration has faced a barrage of subpoenas, demands to testify before a host of congressional panels and letters seeking a flurry of documents. The Trump administration has often ignored congressional requests for documents and witnesses, calling the demands an unconstitutional infringement on the president's powers.

The executive branch's attempts to push back against congressional inquiries targeting the White House have led some Democrats to contemplate new ways to compel current and former West Wing aides to acquiesce to their demands.

But it is Barr's handling of Mueller's 448-page report detailing his nearly two-year investigation that has appeared to escalate the fight between the Trump administration and congressional Democrats, prompting some to call for the attorney general's impeachment.

Democrats believe Barr inappropriately claimed that the president had not committed obstruction of justice, despite evidence laid out by Mueller. Even some prosecutors who worked for the special counsel claimed the attorney general did not adequately represent their findings, telling associates the report was more damning for Trump than Barr indicated.

He also failed to comply with a subpoena this month to turn over Mueller's full report and underlying evidence, material that members of the House Judiciary Committee say they need to conduct an obstruction of justice investigation into the president. Barr advised Trump last week to assert executive privilege over Mueller's findings, warning Democrats that their demands were asking him to break the law.

The House Judiciary panel responded by voting to recommend the lower chamber hold Barr in contempt of Congress, and Democrats are now wrestling with how to proceed.

House Majority Leader Steny Hoyer, D-Md., told reporters Wednesday that a vote in the House to hold Barr in contempt would not happen this month before lawmakers leave for Memorial Day and a weeklong recess.

"This is a very serious matter. We are taking it very seriously," he said, adding that declining to answer congressional questions "is not acceptable in our constitutional system."

Even if the full House votes to hold Barr in contempt, the Justice Department is unlikely to hand over Mueller's complete report. That is why some Democrats have suggested the House use its rarely invoked "inherent contempt" power, which would allow lawmakers to personally fine or even jail Barr until he complied with their requests.

"We do have a jail in the basement of the Capitol, but if we were arresting all of the people in the administration, we would have an overcrowded jail situation," Pelosi said at a Washington Post Live event last week. "And I'm not for that."

There is no longer a functioning jail in the Capitol, but several rooms have been used at various times as detention cells, according to the Architect of the Capitol. The Capitol Police currently has holding facilities nearby that could be used if necessary.

More realistically, the feud between Barr and House Democrats is almost certainly heading to the courts where a judge could decide whether to force the Justice Department to turn over the material.

"I don't want to deny that we have inherent contempt authority, but we are somewhat limited in our ability to carry that out," Hoyer said Wednesday. "This is serious legal question."