Gender, "electability" and journalism: How to cover the 2020 election without sexism

After the massive media failures of 2016, this campaign feels like a crucial test for American journalism 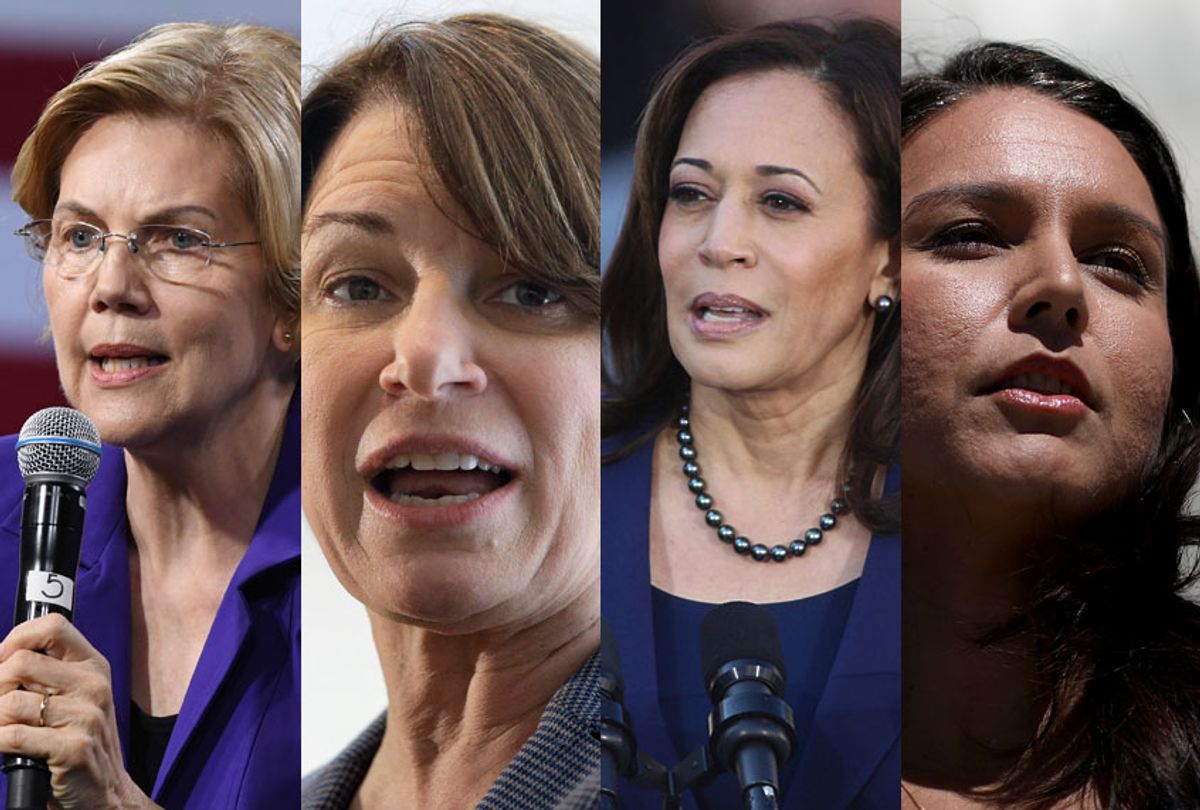 There’s a distressing circularity to the debates about “electability” and gender in the early stages of the 2020 presidential campaign that make it difficult to be certain about anything, or to say anything clearly. It’s like a textbook example of what your Philosophy 101 professor could have called an epistemological dilemma: How do we know the things we “know,” and can we ever be sure we’re not just reflecting our biases and preconceptions back at the world?

The only truthful answer is that we can never be sure of any such thing. Journalism is supposed to correct for this problem, at least in part, by relying on “data” and “reporting,” as if those things were somehow neutral or objective. Data is always ambiguous and requires interpretation, and reporting, in its most elemental form, often involves talking to other people and passing along their biases and preconceptions along with your own. Mainstream journalism in the United States, more than anything else, is a large-scale illustration of the basic principle that wherever you start from is likely to be the same place you end up.

Covering the unfolding 2020 race is puzzling for anyone, since to this point it doesn’t seem to be following the rules — neither the old conventional-wisdom rules of American politics nor the chaotic new rules seemingly revealed in the 2016 presidential election and the 2018 midterms. But this electoral cycle comes with a special level of moral hazard for male journalists, who still dominate political coverage and ought to have learned some lessons about humility and vigilance from their failures of the recent past.

The facts to this point, although strange, are not in dispute; how we interpret them is quite another matter. With nearly two dozen candidates vying for the Democratic nomination — quite a few of whom clearly won’t make it to the end of the year — former Vice President Joe Biden is so far ahead in most polls that if his campaign implodes, that in itself will be a huge political story.

There are at least two disparate strains of punditry in response to this, and I see no way around the conclusion that these are conditioned by gender to a large degree. First comes the hard-headed, pragmatic analysis (normatively delivered by dudes) which holds that whether you like Uncle Joe or not, he is more or less inevitable. Biden’s surge may be massively triggering to progressives and feminists, in this reading, but he is preaching to the non-Twitter-fied, un-woken majority of the Democratic electorate, who welcome his message that Donald Trump was a fluke event and we can soon get back to what Jeb Bush plaintively described — in the bygone days of the 2016 New Hampshire primary — as “regular-order democracy.” (We know how well that worked for Jeb!)

Then there is what might be called the feminist counterattack, exemplified by Salon’s Amanda Marcotte and New York Times columnists Jill Filipovic and Michelle Goldberg. (I would argue that Amanda was well out ahead of those other two — but it’s not a contest!) Here Biden’s popularity and perceived “electability” are illusory artifacts, the product of both the media and the voters projecting what they think other people want, rather than actually selecting a candidate who excites them.

In Filipovic’s elegant formulation, Biden is the favored candidate of “people who believe that the imaginary working-class white voter who is going to deliver the White House to the Democrats wants Joe Biden, which is what, in turn, makes Joe Biden electable.” Goldberg frames things similarly, arguing that Democratic voters are trying to “think like pundits,” or seeking to “strike mental bargains with groups of people they may have never met.”

Beneath that lies the assumption (or perhaps the prayerful hope) that Biden’s support will crumble once the campaign gets serious, and that Democratic voters may yet come out of their defensive anti-Trumpian crouch and embrace more inspiring alternatives. Historical precedent is cited, at least when it's helpful. At this point in the 2004 cycle, Joe Lieberman led most Democratic polls, while Rudy Giuliani was the apparent Republican frontrunner for nearly all of 2007. (Neither of them made it past the New Hampshire primary the following year.) All of this is certainly possible, because anything is possible, but there is no precedent for this situation: a huge field of candidates, with one far ahead and apparently gaining speed.

On the flipside of the Biden quandary lies the inescapable problem of who is being eclipsed by the former veep’s surge. In fairness, that would be everyone else — among the other 22 announced candidates, only Bernie Sanders has consistently polled in double digits, and he now trails Biden by 15 to 20 points in most surveys. But of course what I really mean is that the likelihood of a female nominee in 2020 now looks like a long shot.

Two and a half years after Hillary Clinton received the second-most votes of any presidential candidate in history, and six months after a record number of women were elected to Congress, we’re entering the first presidential campaign ever to feature more than one plausible female candidate. But of the six women in the Democratic field, only Sen. Kamala Harris and Sen. Elizabeth Warren have consistently registered above 5 percent, even as a 37-year-old man with no political experience beyond governing a small city in Indiana zoomed past them (at least temporarily). One of those women, touted on magazine covers a year ago as a leading contender and feminist avatar — Sen. Kirsten Gillibrand of New York — has fallen well short of her fundraising goals and may soon be forced to drop out.

What role do sexism and misogyny, both in the media and in the larger society, play in all this? It’s kind of a dopey question, right? You might as well ask what role microbial decay plays in the terrestrial life cycle. It’s not the only important element, certainly, but it’s everywhere and largely invisible, and everything else that happens is conditioned by it.

Not one sane or honest person in the world would deny that sexism shaped the outcome of the 2016 election. President Trump, who is neither sane nor honest, certainly understands that, to his bottomless glee. As my colleague Amanda Marcotte and others have documented, male journalists who felt a longstanding animus toward Hillary Clinton (for a whole panoply of reasons, defensible or otherwise) suckered themselves into covering her so-called email scandal, the WikiLeaks dump and other even more minor issues as top-shelf breaking news, even as she was running against the most obviously venal and corrupt major-party candidate in recent history.

I don’t intend this article as a personal essay or a mea culpa, but of course I understand the forces that were at play, beyond sheer sexism. Journalists have a deeply ingrained desire to be seen as open-minded and even-handed, and have been conditioned by decades of conservative badgering to overcorrect for “liberal bias.” Nearly everyone in the mainstream press assumed that Clinton would become president and Trump would return to his life of B-grade celebu-sleaze, and that it was only fair to air out whatever dirty laundry she possessed in advance.

In fact, what happened was that reporters and editors — most of them male, though certainly not all — failed to obey the profession’s prime directive, as articulated years ago by Joan Didion: “Observe the observable.” That means seeing and attempting to understand what is in front of you, rather than being swept up in what you think you already know and what you think will happen in the future.

What was observable in 2016 was that the Trump campaign was ingeniously exploiting the atmosphere of mistrust that had been built up around Hillary Clinton over many years, and that it had become impossible to separate her real or perceived faults as a candidate and a human being from misogyny and right-wing conspiracy theory. None of this was new; none of it was a secret. You didn’t have to be a fan of Clinton’s actual record in the Senate or at the State Department (I certainly wasn’t) to perceive that voters and the media were being gaslit about her to an extraordinary degree. She was widely disliked, for reasons no one could adequately explain. She was perceived as corrupt or tainted or troubled, on no hard evidence and with no clear point of reference.

Those were the facts. They were challenging facts to report on with the right degree of dispassion and nuance, no doubt, but they were right out in the open. Instead the mainstream media was lured, time and again, into pseudo-reporting on pseudo-scandals that only thickened the murk around Clinton and cemented the mendacious narrative of moral equivalence between her and Donald Trump. Did that cost her the election? Well, sure it did, given that any one of dozens of marginal factors could have changed the outcome.

Do I think that Clinton’s flukish defeat was entirely caused by the sexism of entitled establishment media dudes who hated her guts? I do not. Do I think that she was in many respects a tragic figure, almost perfectly engineered to lose to Donald Trump? I do. But then, I would think those things, right?

What are the “observables” of the nascent 2020 campaign? One that I see is that we are more alert to issues of gender bias this time around, after the egregious errors and lingering trauma of 2016, but that doesn’t mean we can escape them. Joe Biden is deemed “electable” or is attacked as a mass delusion, a human panic room for mainstream Democrats. Either way, his touchy-feely conduct in the past seems to have made no difference. Meanwhile, we’ve already had micro-moments about Elizabeth Warren’s lack of “likability,” Kamala Harris’ record as an aggressive prosecutor and Amy Klobuchar’s use of improvised utensils, followed by a whole bunch of meta-narrative about whether those were legitimate stories (maybe 38 percent) and why those candidates don’t get covered for their interesting policy ideas. (Pro tip: Because nobody reads those stories.)

I don’t think “the media” is responsible for Biden’s mildly surprising surge to the top of a mediocre field, or for buzzkilling the Year of the Woman. I also don’t think we are responsible for telling the voters that they don’t really want what they say they want, even when the latter seems wrong-headed or even doomed. But we are definitely responsible for trying to ask hard questions, especially about ourselves. When I hear male (and even female) colleagues complain privately that covering politics now feels like walking through a minefield, I think the only fair response is, Dude, who laid all those mines? Let’s move forward with our eyes open, and try to dig up as many as we can.