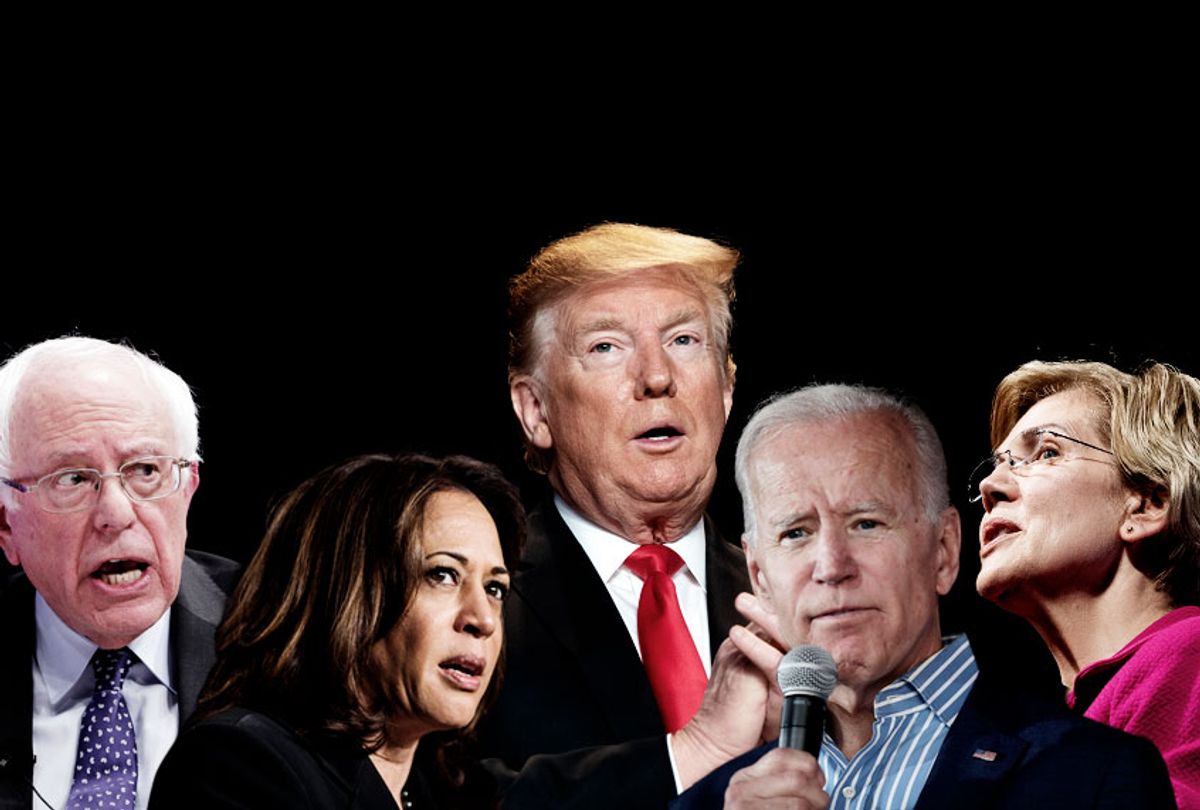 Trish Regan saw Sen. Kamala Harris' breakthrough moment coming. In my most recent conversation with the Fox Business Network prime-time host — conducted before last week's Democratic presidential debates — she pointed to the California senator as a candidate who might bridge the gap between moderates and progressives and successfully confront President Trump.

Before and after that prescient moment, Regan's principal topic in our interview was whether Democrats are moving too sharply toward the left, as many pundits have suggested, and run the risk of being perceived as radicals or socialists. In the second Democratic debate on Thursday night, Sen. Bernie Sanders, the only candidate in recent American history to identify as a "democratic socialist," was asked whether nominating him would effectively re-elect President Trump. Sanders did not directly answer the question, pointing to polls that put him ahead of Trump, saying he'd win by exposing the president "for the fraud that he is."

We already know that Trump will seek to depict any left-of-center Democrat (and quite likely any Democrat whatsoever) as a radical elitist out of touch with ordinary Americans. During the kickoff rally for his re-election campaign last week, Trump told the audience in Orlando that "our political opponents look down with hatred on our values and with utter disdain for the people whose lives they want to run."

That sums up Trump's likely message in the 2020 presidential election, which is pretty much the message that made him so appealing to millions of Americans in 2016. If Democrats want to win next year, they will need to find a way to address those concerns.

This was exactly what I wanted to discuss with Regan. Her Fox Business program, "Trish Regan Primetime," often explores the intersection of economic policy with deeper issues involving civil liberties, political philosophy and humanitarian crises.

Regan's show is an increasingly popular feature on the sister network to Fox News, and in May marked its first monthly win over CNBC in total viewers. She draws on her background as a longtime business journalist at Bloomberg, CBS News and CNBC. When probing economic topics — and, in particular, the difficult trick of balancing the creation of economic opportunity with protecting individual freedoms — it's always useful to hear Regan's perspective, regardless of whether one shares her ideology. (To be clear, I largely don't.)

I've talked to Regan several times about "socialism," a catch-all term that has been applied to the crisis-ridden government of Nicolás Maduro in Venezuela, the Scandinavian social democracies and the left wing of the Democratic Party. She has suggested that "democratic socialists" like Sanders and Rep. Alexandria Ocasio-Cortez could lead the way to failure and perhaps even Venezuela-scale disaster. As a New Deal liberal myself, I deeply disagree.

One of the defining features of the 2020 Democratic presidential contest so far is the obvious division between staunch progressives like Sanders or Warren (although the latter says she's not a socialist) and more moderate or mainstream candidates like former Vice President Joe Biden.

While Sanders is "within the socialism sphere," Regan said, Biden is much closer to "what you saw the Democratic Party as in the past. In some ways, that's challenging for him right now. There's an energy and enthusiasm surrounding socialism that, as you and I have discussed, I personally feel is misplaced. Joe Biden represents more of a traditional Democratic candidate."

In a follow up email, I asked Regan how she thinks about she perceives Trump's claim that Democrats "look down with hatred on our values" and have "utter disdain" for ordinary people.

"He is referring to the radical left wing that has been streamlined by the Democratic Party," Regan replied. "Socialism is absolutely a threat to America. Our economic system is based on a kind of straight forward input-output equation. We are a meritocracy. If you work hard and put in the time, effort and are willing to take the risk, you’ll be rewarded in America for that. Granted, it’s not perfect, and I’ve explained that capitalism in its current form has betrayed workers at the expense of capital — however, it sure beats the alternative. Socialism, as an economic system, ultimately fails a society because it lacks the proper incentives.

"Democrats weren’t always like this," she continued. I grew up with Irish Democrat roots and those roots still govern a lot of my thinking today: we need safety nets, we need a better balance between capital and labor — but we also need to preserve a system that rewards work-ethic and risk taking. Bernie Sanders wants everyone to be, economically, the same. That is a prescription for failure."

In addition to her prescient comments about Kamala Harris, Regan also discussed the other candidate widely perceived as a victor in this week's debates, Sen. Elizabeth Warren of Massachusetts.

"Elizabeth Warren, I think, has some very interesting economic proposals," Regan said. (Her comments were similar to those made by Fox News' Tucker Carlson, who also praised some of Warren's ideas during an interview with Salon last January). "I think she's certainly tried to game it out, and has thought long and hard about her economic policy. However, I'm gonna say something, and it's the cold, hard reality, and that's that you've got to be likable in politics.

"That's where I think she and Kamala may have some differences. I think Kamala's going to be able to relate to more people. Elizabeth Warren is gonna have challenges on that front, that's just the reality of it. She projects herself as a bit of a second-grade teacher. I don't know about you, but not all of us loved their second-grade teachers, so I think America doesn't really want to be lectured. They want a real leader, and there are other candidates in the pack right now that project that leadership, and really excite and empathize with people."

In our follow-up email exchange, Regan said she thought that Harris' proposal for a tax credit for working families could prove effective among both Democratic primary voters and the general public.

I think it’s a creative, more realistic approach with incentives that matter.. Her idea is to pay federal tax credits that match a person’s earnings up to $3,000 (or $6,000 for married couples). The credits would be phased out for higher earners ... but importantly, would NOT benefit Americans with no earnings. This way government is making an effort to reward people who work and I like that a lot.

By contrast, she thought that Democrats needed to be careful about playing into Trump and other Republicans' likely strategy of painting them as far-left radicals or socialists.

When the platform becomes free this and free that — and candidates continually try to outdo each other with free stuff — then the script writes itself. Here’s what I would like to see: why isn’t a Democrat out in front of the capital vs. labor struggle in a way that preserves our capitalistic values? I don’t disagree with Dems that say workers have gotten the short end of the stick over the last thirty years. They have. But please offer us a solution that doesn’t involve government-imposed income limits. Our current economy needs more creativity — not less. The Democrat that can deliver  (and by deliver I mean get people excited about)some meaningful policy ideas for solving our massive income gap is the Democrat that will succeed across party lines.

According to Regan, Trump was able to get elected in the first place partly he strayed away from orthodox conservatism and appealed to liberals who were concerned about income inequality and the loss of economic opportunity.

I think there are a lot of people that may have historically identified themselves as Democrats, but they weren't AOC-style Democrats, they weren't socialists, they were just traditional Democrats. Those voters, in places like Pennsylvania, and Michigan and other states through rural America, I think they said, "OK, this guy's actually talking about something that I can relate to. He's talking about bringing jobs back, and not allowing big corporations to run the world in a way that is gonna be negative for American workers." I think he got a lot of them on board, and now I would argue that it's up to the Democrats to get them back.

Even if you don't agree with all of Regan's prescriptions (as I do not), this perspective is invaluable for Democrats to consider. If Donald Trump's election demonstrated one thing, it was that Americans are exhausted with a status quo they perceive as unresponsive to their needs. Trump offered a right-wing brand of populism, and a pugnacious approach to politicking, that seemed — at least on the surface — to challenge that.

No one could argue that Trump hasn't shaken things up on issues like immigration policy, trade policy or foreign policy. (I previously discussed this at length with Steve Hilton, one of Trump's favorite Fox News pundits.) He has offered Americans a sharp choice on those issues and also on questions like how much government should regulate the economy, whether we should treat climate change as a serious threat, and how much a literal-minded reading of the Constitution or a Christian right worldview should shape the federal judiciary.

When Americans go to the polls in 2020, they will have to answer two questions: Do they like these changes? And how do they compare to the alternatives offered by Democrats?

If Democrats veer into Republican-lite moderation, they will seem to offer an echo rather than a choice, a path that my Salon colleague Amanda Marcotte has argued could lead to defeat. But if they pick a candidate who is too easily stigmatized as a dangerous radical, they risk defeat in the other direction.

Could a self-described socialist like Sanders, or an anti-corporate progressive like Warren, be elected president? Possibly, but even a brief glance at American history makes it very clear that this would be more difficult than many progressives want to admit.

There's a reason why the term "socialist" has a stigma attached to it, and why most Democrats do everything in their power to avoid it. Of course it's ludicrous to associate Sanders' brand of "democratic socialism with the tyrannical regimes of China and the old Soviet Union, or with the present-day failed state of Venezuela. But the stigma exists, and it could certainly be used to lure swing voters back toward a massively unpopular Republican president. For generations, Republicans have successfully branded Democrats as dangerous radicals, even if the label was rarely justified.

Does that mean Democrats cannot or should not nominate a progressive or even "socialist" candidate? No, but it lends extra significance to Kamala Harris' attacks on Joe Biden last week, as Harris attempts to position herself as a center-left alternative to meaningless moderation and full-on socialism. And it makes clear that whichever course Democrats choose, they need to be prepared for the attacks they know are coming.