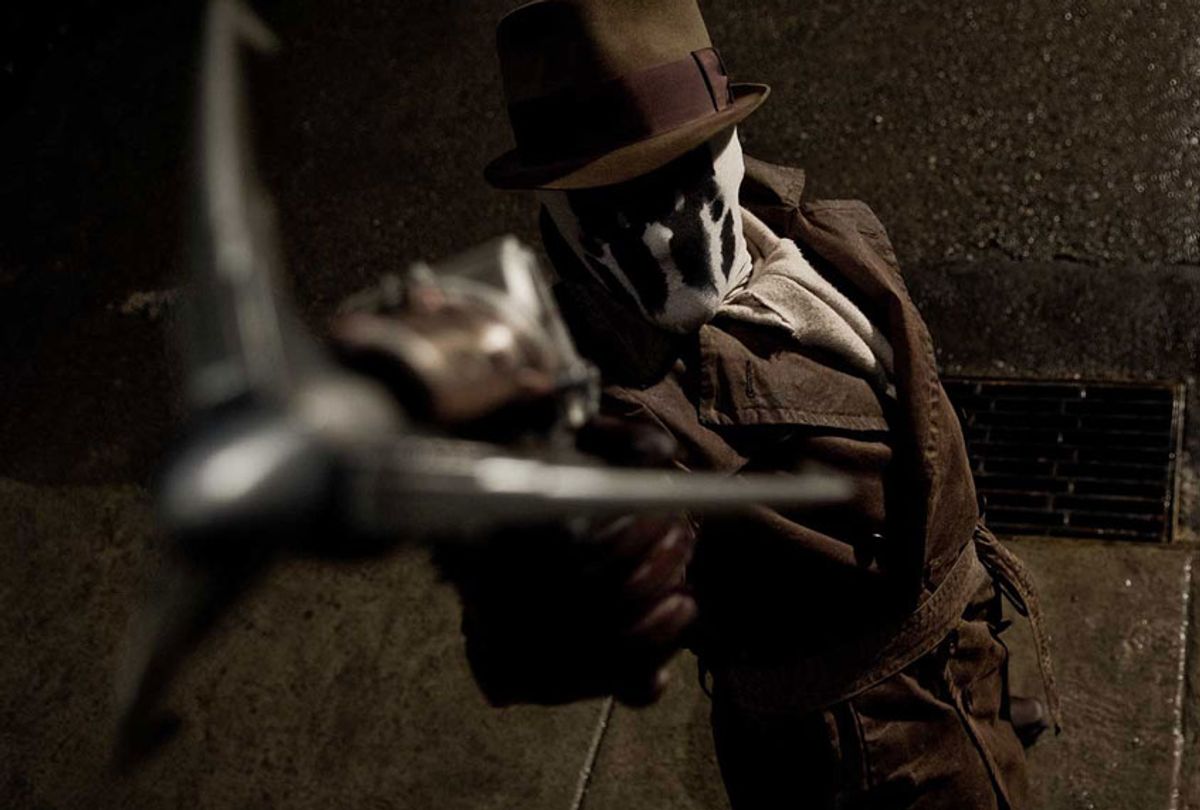 Now that HBO has released a teaser trailer for their upcoming "Watchmen" adaptation — although showrunner Damon Lindelof has described the upcoming show as a "remix" rather than a straightforward retelling, whatever that means — it's time to reappraise the best known retelling of Alan Moore's classic graphic novel, Zack Snyder's 2009 "Watchmen" film.

For those unfamiliar with the plot: At face value, "Watchmen" takes place in an alternate timeline of American history, one in which superheroes are real and President Richard Nixon is serving his fifth term (the film, like its literary source material, is primarily set in the mid-1980s, although both jump all over the place chronologically). Because superheroism was rendered illegal by a law called the Keene Act, the only active superheroes by the time of the story's main plotline were those sanctioned by the government, including the god-like Dr. Manhattan/Jon Osterman (Billy Crudup),  sociopathic The Comedian/Edward Blake (Jeffrey Dean Morgan), and outlaws like the anti-social Rorschach/Walter Kovacs (Jackie Earle Haley). After The Comedian is murdered, Rorschach speculates that someone is trying to kill off former superheroes, setting off a chain of events that eventually ensnare other erstwhile costumed crimefighters including Nite Owl II/Daniel Dreiberg (Patrick Wilson), Ozymandias/Adrian Veidt (Matthew Goode) and Silk Spectre II/Laurie Jupiter (Malin Åkerman).

On the surface level, this seems to be little more than a subversive take on the traditional superhero narrative — there is a mystery to be solved, criminals to be beaten up, colorful outfits to be worn and quotable lines to be read — but the genius of Moore's 1986-1987 graphic novel, and Snyder's 2009 film adaptation, is that they wound up being about much, much more. The heroes themselves are extraordinarily complex: Dr. Manhattan, who alone among the bunch has genuine superpowers, has become so removed from ordinary human affairs that the tension between his latent humanity and quasi-divine powers has made him cold and prone to psychological manipulation; Nite Owl II, far from being an intimidating force, struggles with impotence and an over-reliance on technology and nostalgia; Rorschach, perhaps the most idealistic of the bunch, is so reliant on superheroics that he literally cannot adjust to life as a "normal" person, with his iconic mask (consisting of ever shifting black ink blots against a white cloth background) feeling more like a real face than his actual human mug; and Laurie Jupiter struggles with being taken seriously as a woman in a field dominated by men.

Similar observations can be made about the social commentary in the underlying premise. Long before movies like "The Dark Knight," "Captain America: Civil War" and "Black Panther" attempted to tackle real-world social and political issues, Moore's "Watchmen" did so by setting its tale in a universe quite similar to our own. Issues like geopolitical strategy and the consequences of war, racism and misogyny, systemic poverty and the proper role of government in regulating individual choices are tackled thoughtfully and in ways that feel organic to the narrative itself. It makes sense that "Watchmen" was the only graphic novel to appear on Time Magazine's list of the 100 best English-language novels since 1923 — even the most incorrigible anti-comics snob would have a difficult time describing it as anything other than literature.

If I'm describing the plots of the graphic novel and Snyder adaptation interchangeably, that is because Snyder for the most part did his best not to take excessive liberties with the source material. This isn't to say that there aren't major changes: A major twist at the end occurs differently in the movie than in the book (albeit with analogous results for the main characters), and there are large sections of the graphic novel that were excised entirely so that the story could be told in a 163-215 minute running time (depending on which version you choose to see). Nevertheless, Snyder's 2009 movie is about as close to a faithful retelling of Moore's story as one could realistically expect to see produced by a major Hollywood studio.

It also has many elements that are simply outstanding. Foremost among them is Jackie Earle Haley's performance as Rorschach. In the hands of a lesser performer, the character of Rorschach could have been a teeth-gnasher, but Haley instead depicts him as a deeply wounded soul, someone who fights crime to cope with childhood traumas that he cannot address in any kind of healthy way — and which are constantly exacerbated by the depravity and suffering which he feels around him. Even though Rorschach is the least socially well-adjusted of the main characters, he is also the most human; his inability to function is because he is all too sensitive to the horrors of the world around him, and too desperate to see justice prevail over injustice. Yet instead of being preachy or even overt about his principles, Haley manifests them in a performance that is subtle where it could have been over-the-top, and even darkly comical at times.

The other cast members also rise to the occasion with the material given to them: Morgan is horrifying as the casually murderous Comedian, Goode oozes billionaire entitlement and pomposity as the seemingly untouchable Ozymandias, Åkerman is the grounded voice of reason as Silk Spectre II, Wilson wears his insecurities on his sleeve as Nite Owl II and Crudup finds the right way of seeming to be removed from human concerns while still being fundamentally human as Dr. Manhattan. The secondary performances are also top notch (particularly Carla Gugino as Silk Spectre/Sally Jupiter), with the cast recognizing the depth of the material they've been given and striving to do justice to their characters. It is easy to forget that in 2009 — Christopher Nolan films aside — most comic book movies were still viewed by many as juvenile piffle, with serious actors taking thinly-written roles for purely financial reasons. No one can fairly say the cast of "Watchmen" were phoning it in for a paycheck.

Another strength of Snyder's adaptation is that it doesn't try to update the source material by setting it in 2009. By keeping the story in the alternate 1980s, it underscores the universality of the themes that Moore wished to discuss. It's hardly like the poverty-ridden, desperately unequal and neo-imperialistic America depicted in the book and movie were far removed from the America of 2009 — or, for that matter, of 2019. If Snyder had attempted to update the social commentary for his own era while fundamentally sticking to Moore's story, there would have been greater risk of him making a misstep or blunder, of attempting to bite off more than he could chew — and of making the film feel like a product of 2009 rather than the retelling of a timeless tale.

This didn't stop many critics from blasting the film. Although it has a marginally respectable 64 percent fresh rating on RottenTomatoes.com, critics who adored the graphic novel were dismayed with the film. "If you don't know these characters from the novel, you're going to have a hell of time keeping up with their multi-decade soap opera," complained Richard Roeper. Joe Morgenstern of "The Wall Street Journal" warned that "unless you're heavily invested — as countless fans and fervent fanboys are — in the novel's flawed superheroes, its jaundiced take on heroism and its alternate vision of American history, watching "Watchmen" is the spiritual equivalent of being whacked on the skull for 163 minutes. Dana Stevens of Slate was even more scathing, using the existential plight of Dr. Manhattan as a metaphor for the movie's supposed flaws: "Crudup conveys the sadness of a man whose human desires and memories have been made all but inaccessible by the crushing weight of technology. Sadly, Watchmen plays as if Zack Snyder performed a similar lab experiment on Alan Moore’s wonderfully human-size story."

(A look through the Salon archives shows Executive Editor Andrew O'Hehir, who filled the film critic chair at the time and was admittedly not enthusiastic about superhero movies then, gave "Watchmen" a rave review, calling it "Dense, intense, tragic and visionary, this is the kind of movie that keeps setting off bombs in your brain hours after you've seen it. . . . If I could have gone back inside and watched the movie all over again, I'd have done it.")

If there is any major flaw in the 2009 movie "Watchmen," it is that it is nowhere near as good as the graphic novel — but this is hardly the fault of the movie. "Watchmen" is a complex story, one that required hundreds of pages to sufficiently develop, and it would have been impossible to do all of the material justice in a feature-length film. Yet even this flaw has a silver lining: Countless people who saw the movie in theaters, and were blown away by it, decided to read the graphic novel precisely because of that cinematic experience (I count myself among them). It is a testament to the film's quality that it could inspire people to want to read the original book instead of turn them away from it or make them feel like they've already had enough of that particular universe. This, more than anything else, is the best thing that the "Watchmen" movie has going for it.

This isn't intended to be a defense of the rest of Zack Snyder's cinematic oeuvre. When asked to write his own original superhero stories, like 2013's "Man of Steel" and 2016's "Batman v. Superman: Dawn of Justice," Snyder has fallen short. Even then his ambition has been commendable — he clearly admires intelligent superhero stories and wants to tell his own, an impulse that deserves respect — but it seems that, without the guiding hand of another writer like Moore, he has been unable to deliver. Yet when given a great story and told that his job is to simply adapt it, Snyder more than rises to the occasion. Such was the case with his "Watchmen" movie, a film that deserves respect even as HBO plans on taking the franchise in a new direction.