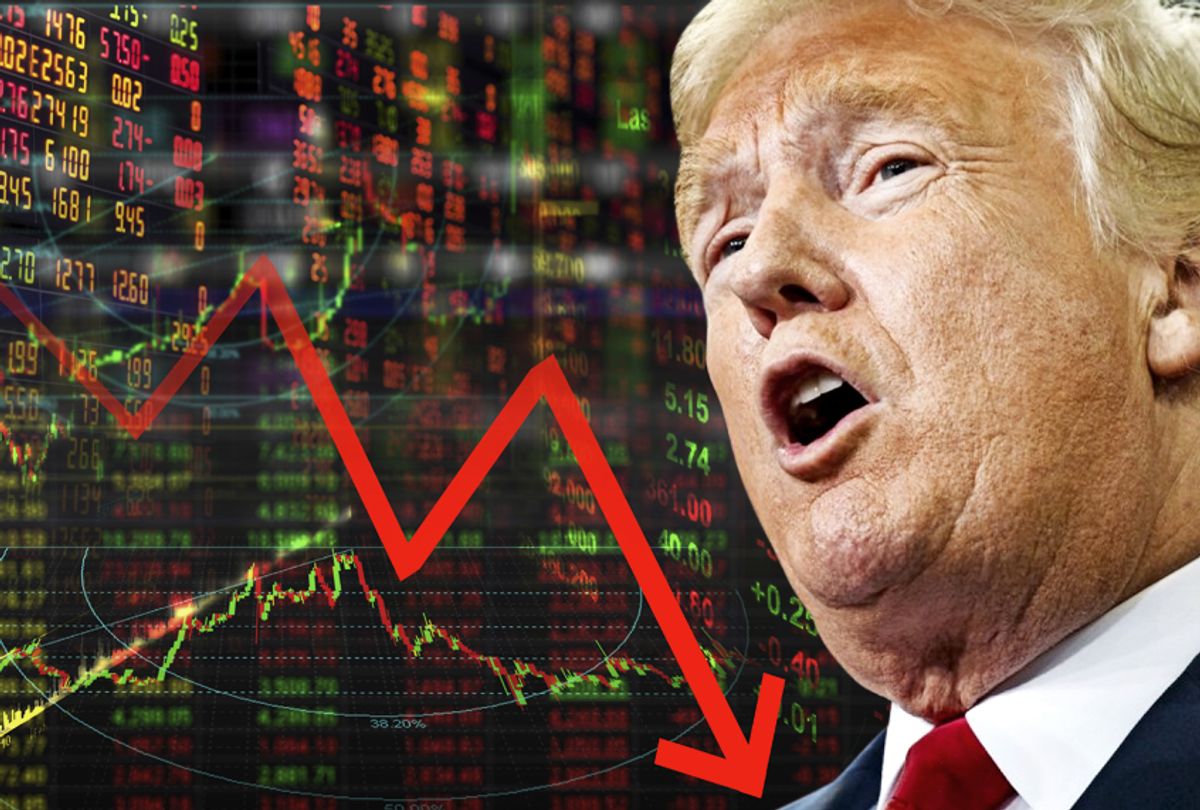 President Trump responded to a tanking stock market, a global economic slowdown and an inverted yield curve by suggesting there was a conspiracy by economists and the media to make him look bad.

Trump tried to blame this week’s stock market slide, which was triggered by worries of a coming recession, on the media.

“The Fake News Media is doing everything they can to crash the economy because they think that will be bad for me and my re-election,” Trump declared on Twitter. "The problem they have is that the economy is way too strong and we will soon be winning big on Trade, and everyone knows that, including China!”

Trump’s prediction that “we will soon be winning big on trade” betrays the current reality: The United States is not winning on trade. His escalating trade war with China has wreaked havoc on the stock market and economists worry it has increased the risk of a recession. Meanwhile, the trade deficit with China has actually been increasing and the trade deficit with Europe is now higher than when Trump took office. The money raised by his tariffs on China are not even enough to cover the taxpayer-funded bailout of farmers hit hard by the trade war and taxpayers have also been hit with big price increases on countless products.

While blaming the media to the public, Trump has privately accused economists of conspiring against him by releasing bad numbers to make him look bad.

“He’s rattled,” a Republican source close to the administration told the Washington Post. “He thinks that all the people that do this economic forecasting are a bunch of establishment weenies — elites who don’t know anything about the real economy and they’re against Trump.”

Except it isn’t just “establishment weenies” sounding the alarm. A survey of American manufacturers found that production is at its lowest since Trump took office, with many blaming his tariffs. Farmers in the Midwest are going broke at record rates, with Trump’s trade war driving many out of business. More than 50 coal plants and eight coal companies have closed since Trump took office. Job creation under Trump is more than 800,000 short of the job growth during the first two and a half years of Obama’s presidency, while the tax cuts he claimed would pay for themselves have added trillions to the national debt. More than 70 percent of American corporate CEOs expect a recession before the end of Trump’s first term.

Trump’s denial of the economic realities that could imperil not just his re-election campaign but millions of workers has spread to his top economic advisers. Larry Kudlow, the former CNBC pundit Trump hired to be the director of the National Economic Council, shrugged off worries of a looming recession.

"Nobody likes to see market volatility. I get that. You get bears coming out of the woodwork. I get that. But we've been through that before,” Kudlow told the Post.

It’s worth noting that ahead of the 2008 recession, Kudlow called economists who predicted a coming recession “bubbleheads.”

“There’s no recession coming. The pessimistas were wrong. It’s not going to happen,” he wrote in December 2007. “The Bush boom is alive and well. It’s finishing up its sixth consecutive year with more to come. Yes, it’s still the greatest story never told.”

The Post reported that Trump advisers “acknowledge that they have not planned for a possible recession” and are instead “delivering the president upbeat assessments in which they argue that the domestic economy is stronger than many forecasters are making it out to be.”

Lawrence Summers, the former treasury secretary who served as the National Economic Council director under Obama, warned that it was vital for the administration to prepare for a possible recession but noted that Trump has surrounded himself with economists with no credibility in the event a downturn does hit.

“Ludicrous forecasts and economically illiterate statements have dissipated the credibility of the president’s economic team,” Summers told the Post. “It’s banana republic standard to deny the statistics, bash the central bank, try to push the currency down and lash out at foreign countries.”

Despite a no good, horrible, very bad week for the U.S. economy, and the fact that his team has taken no steps to prepare for a possible recession, Trump bragged to his supporters at a New Hampshire rally on Thursday that the economy would tank if anyone but him is elected in 2020.

“You have no choice but to vote for me, because your 401(k)'s down the tubes, everything's gonna be down the tubes,” Trump told rally-goers in Manchester. "So whether you love me or hate me, you gotta vote for me.”