As many as five Republicans may challenge Trump in the primaries 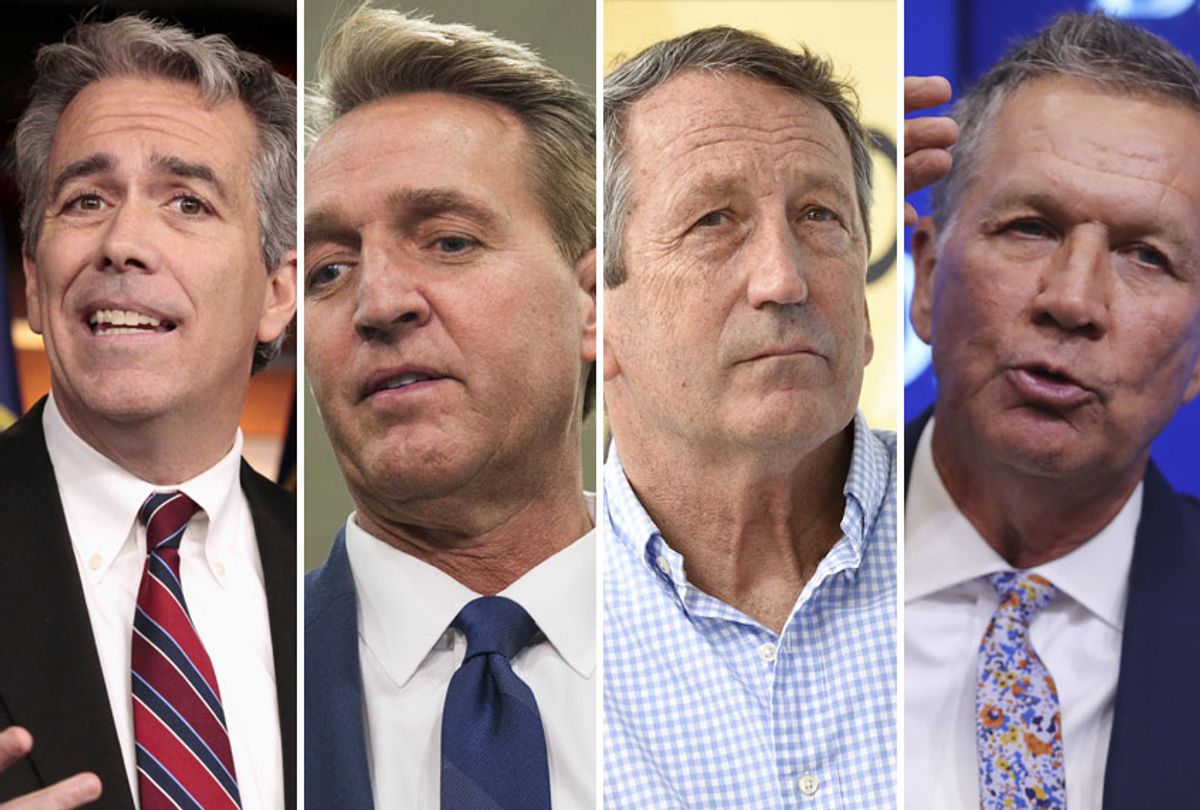 Former Reps. Joe Walsh, R-Ill., and Mark Sanford, R-S.C., are close to launching primary challenges to Trump, The Washington Post reports, while former Sen. Jeff Flake, R-Ariz., and former Ohio Gov. John Kasich are being recruited into the race by anti-Trump Republican donors. The only Republican to formally announce his candidacy is Weld, who ran as Gary Johnson’s running mate on the Libertarian Party ticket in 2016, but has failed to gain any traction.

Flake, who frequently criticized Trump before leaving the Senate, has received a “flurry of recruitment calls” from Republican donors, according to the report. Flake has said he is “unlikely” to jump into the race but is keeping his “door slightly ajar.” The former Arizona senator said that Republican donors are worried that the slumping economy could cost Republicans the White House.

“They are wondering, if the economy isn’t stellar next year, how is the party going to win? By the president offending more people?” Flake told the Post.

Kasich will head to New Hampshire next month to meet with supporters. Longtime Kasich adviser John Weaver told the Post that the former 2016 candidate is “continually looking at this race and has seen an increase in people asking him to get in.”

Sanford, another critic of Trump who lost his 2018 congressional primary race (in a seat ultimately won by a Democrat), recently returned from New Hampshire and is “leaning toward jumping in,” according to the Post.

Of course, Sanford and Flake no longer have jobs as elected Republicans because they opposed Trump, and challenging him in the primary could pose an insurmountable challenge. A recent Fox News poll showed that 88 percent of Republican voters approve of the job Trump is doing.

“Anybody who says, ‘I think I can beat Donald Trump,’ I think is stretching it,” Sanford told the Post. “It’s a daunting task and it is indeed preposterous at many different levels.”

Instead, Sanford believes he “could win without winning” by focusing on conservative principles over Trump’s big spending and the economy.

“We really are at a financial tipping point the likes of which we haven’t seen in a very long time,” Sanford said. “Unless we constructively engage this issue, which is not being done, I think the financial markets will do it for us, and historically that process has been bloody for regular, working, everyday Americans.”

Walsh, a former Tea Party congressman who now hosts a radio show, is the closest of the four Republicans to launching a formal primary challenge. Walsh, who repeatedly smeared former President Obama, both when Walsh was in Congress and as a talk show host, told The Post he would turn the primary battle into a “bar fight.”

“He’s a bully and he’s a coward,” Walsh told the Post. “Somebody’s got to punch him in the face every single day.”

Bill Kristol, the former editor of the Weekly Standard and a prominent "Never Trump" Republican who now heads the anti-Trump group Republicans for the Rule of Law, had tried to recruit Maryland Gov. Larry Hogan into a primary campaign, but Hogan apparently declined. Kristol admitted that it was a long shot to unseat Trump in the primary but said his “dream scenario” would be to have a primary challenger weaken Trump enough to have a more prominent Republican decide to jump in.

“You need more erosion of Trump in the polls, maybe an economic slowdown, more of a sense of him coming unglued, but the key is getting voters to focus on the question of whether they’re OK with four more years of Trump in the Oval Office,” Kristol said.

Anthony Scaramucci, the former White House communications director, has also launched a PAC called the Committee to Dismantle Trump after a falling-out with the president. Scaramucci vowed to raise money to run ads attacking Trump, but he too acknowledged that defeating him at the polls was unlikely.

“I’m going to throw my own dough in there, ask others to put their dough in there, and we’re going to explain to people what he’s doing,” Scaramucci said in a recent podcast interview. “I can grab ahold of 5, 6, 8 percent of the people that know he’s nuts and possibly move them.”

The anti-Trumpers’ disadvantage in challenging a president who is wildly popular in his own party is compounded by the fact that the Republican National Committee has effectively been taken over by the Trump campaign.

The RNC passed a resolution pledging its “undivided support” to Trump and has merged its fundraising and strategy with his campaign. The Trump campaign and affiliated committees raised a record $105 million between April and June. Some states are even considering canceling their Republican primaries altogether.

“Republicans are firmly behind the president and any effort to challenge him in a primary is bound to go absolutely nowhere,” RNC chairwoman Ronna Romney McDaniel said in a statement earlier this year.

Trump, who has repeatedly attacked Democratic frontrunners, does not appear to be worried about a challenge from the right.

“There’s no discussion of any of them or any of that,” White House adviser Kellyanne Conway told the Post. “None of them even has risen to the level of a nickname.”