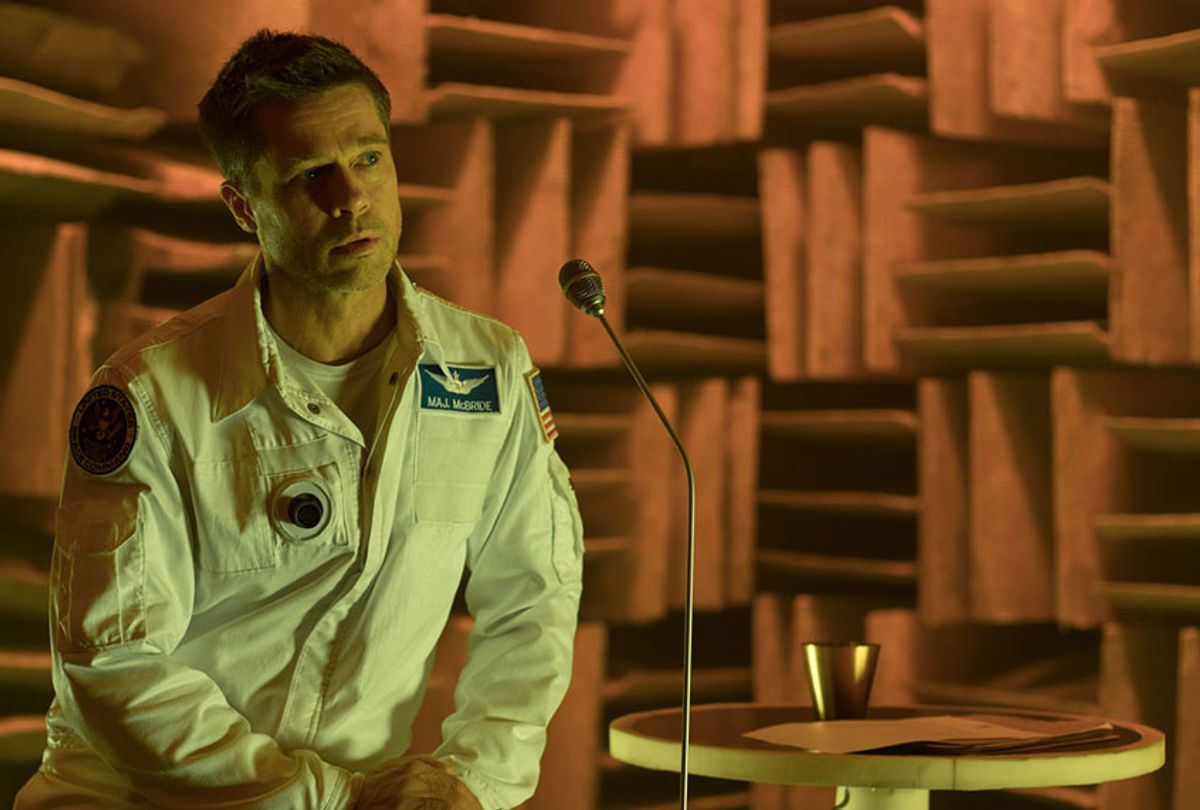 Like everyone with a degree in physics, I take a preternatural pleasure in pointing out bad physics in movies. “Ad Astra,” the new space epic stacked with A-listers, is not terrible in this regard — there are a few momentum and centripetal force issues, and a trip to Mars that any cryptographer will tell you was unnecessary. Yet though its physics are halfway decent by Hollywood standards, the movie’s politics are laughable. That's because "Ad Astra's" cloying vision of the future — a sort of LBJ-era space liberalism, with big public works projects and democratic space colonization — is so unrealistic that it feels like counterrevolutionary propaganda from the corporate overlords at Fox.

Note: There are no major plot spoilers, but minor spoilers for the film's setting follow.

We learn in the beginning that the story takes place in a non-specific near future. When most of us hear the phrase “near future,” we might picture an increasingly warm and polluted planet, climate refugees, food shortages, and a rising tide of far-right nationalism stemming from neoliberal capitalism's inability to address any of these problems in a structural and equitable way. Yet the future of “Ad Astra” doesn’t look anything like that. In the film's world, it's as if the political situation of 1960s America — big government public works projects, meritocracies, Johnson-era Great Society type stuff — never ended.

In the opening sequence, we meet Major Roy McBride, an astronaut played by Brad Pitt, performing maintenance on a stratospherically tall antenna, as one does in this future in which the governments of the world are so  functional that they have all banded together to contribute public money to this project. The tower is immense and extends from the ground to the upper atmosphere; its workers appear to be government employees like McBride, who work for a post-NASA institution called Space Command.

McBride nearly dies when a power surge, caused by a distant anti-matter explosion, knocks him off the tower. Interestingly, aside from translucent phones and that reference to anti-matter, all the other technology in the movie is Apollo-era: big chemical rockets with real, physical switches that go "clunk" when you flip them. The background technology recalls, intentionally I suspect, the spirit of the era in which those were produced by our government.

As a brief aside, it is fascinating but unsurprising that this brand of nostalgia for the halcyon days of NASA are making a Hollywood resurgence. To wit: the basic premise of "Interstellar" (2014), as Eileen Jones wryly noted in Jacobin, was that the American Dream was dead because people believed the moon landing was a conspiracy. 2018's "First Man" was a love letter to the Space Age and its heroes. Every dying empire is doomed to replay the hits from its best years, economically and culturally — to remind its citizens of when it was still "great." We are still obsessed with the period of economic and cultural flourishing that took place in the United States between 1945 and 1975, and we still think of the things from that era — like the middle class, cheap or free public higher education, big rockets, and social welfare in general — as normal for the U.S., even though they're not. We are stuck replaying the cultural hits from this era, from mid-century modern furniture to Heathware to nostalgia for The Beatles.

Back to the film: Pitt's character ends up on a private spacecraft to the Moon, operated by Virgin — one of the brief nods to current trends towards privatization of space. The Moon's spaceport on the moon looks just like Earth's airports, with a Subway, a Hudson News, and average-looking middle class folks strolling through the terminal. The filmmakers' decision to model the Moon's spaceport on Earth's airport was curious; it was as if they were hinting that the moon would be colonized via some kind of liberal capitalist order, with a public spaceport like Penn Station full of the commercial signifiers of middle class consumption.

From the space antenna to the giant public rockets to the manned astronomy mission to the outer solar system, the universe of "Ad Astra" is replete with public mega-engineering projects that recall an era of Keynesian economics and income equality that does not exist anymore and may not ever exist again as long as capitalism is the dominant economic system on the planet. As economists like Thomas Piketty have noted, the most unique thing about the American middle-class is that it was a historically specific accident caused by the confluence of the labor movement, the Cold War, and the postwar economic situation; the world’s wealthy elites have been chipping away at that economic arrangement ever since.

Now we live in an epoch of neoliberal economics, the undemocratic system favored by said ruling elites, in which democracy takes a backseat to the vicissitudes of the market. In neoliberalism, all human behavior must be constrained within the system's own inhuman economic parameters. Every time a recession occurs under the neoliberal order, the ruling elites see it as an opportunity to cut back on social welfare programs and social services, and politicians wring their hands as if there were no other choice but austerity. Politicians are loath to believe in any other political horizon because they, too, have become entrapped by the money of said elites; their campaigns, particularly in the U.S., are funded by those rich capitalists’ dollars. The political system is now designed to respond almost exclusively to their money, while legally, money has been conflated with speech.

So you can see why "Ad Astra's" political extrapolations feel like a joke in contrast to our current political backdrop. A more realistic projection of today's politics into space appears in the 2017 video game "Tacoma," the follow-up from the creators of the award-winning "Gone Home." In "Tacoma," you play a subcontractor exploring the eponymous privately-run space station in the 2080s on behalf of a corporation who is interested in figuring out why it has gone dark; the corporation is less interested in the disappeared people on board than the expensive AI computer. Through clues in the game, you glean that the contract employees on-board the Tacoma were living a sort of indentured servitude, while much of Earth's public sector seems to have been taken over by corporations — there's a reference to "Amazon University at Buffalo.” Amazon allusions are rampant: there are hints that the space station's contractors were flirting with unionization, and the ship is full of other corporate propaganda and surveillance tools that seem ripped from a Amazon warehouse.

It's delightfully dark, and feels more politically real. "Tacoma" is neoliberalism in space; "Ad Astra" is more like 1960s liberalism  — a stable, democratic capitalist future, where world governments work together and have big public works budgets. That kind of thing hasn’t been possible for decades thanks to the aforementioned shifts in politics.

It is curious, then, that the movie’s imagery is very Space Race-era: big chemical rockets, massive space works projects, and a space meritocracy where people of all origins and backgrounds live on other moons and planets — having worked their way up whatever meritocratic ladder would get them there. On both the Moon and Mars, we see characters that are coded as normal middle-class people with slightly alienating (pun intended) space jobs — administrative, legal, engineering, et cetera. In one particularly clever scene, Pitt’s character deplanes (derockets?) at Mars and goes through the equivalent of customs. The young customs officer, a public employee who has been living underground on Mars like everyone else, looks slightly frayed around the edges — like a customs agent on a remote outpost might. On the concrete wall in the background of the customs office we see an anti-suicide PSA, just like the wall posters MTA puts up in the New York subway.

But this isn’t how Mars or the Moon are going to be colonized if current trends continue. As I’ve written before, we’re on track for space feudalism — a solar system populated for profit, for rich tourists, staffed by those who are poor and most ripe for exploitation by libertarian billionaires  like Elon Musk and Jeff Bezos, who both appear to detest labor. If you thought the Amazon warehouse was a dismal place, imagine the potential for exploitation when living in a Bezos-owned space station, where the man owns your oxygen, water, food and housing, too.

As such, you get the feeling watching “Ad Astra” that it is a kind of subtle propaganda delivered by the elites who run the entertainment industry. Everything is fine, they say; the future will look not too different than the present. We’ll have some of the same problems, like piracy and crime, sure — but we’ll be in space! The middle class will still exist, as will Earth! We can come together and have big mega-engineering projects! I could almost feel the executives at Fox thinking that this will comfort us into being convinced that the world isn’t ending and their ilk aren’t lobbying and fighting to take us all down with it.

The most politically realistic aspect of “Ad Astra” is that of the psychological health check-up app that the astronauts use. It seems that to save costs, Space Command doesn’t actually provide real human therapists to check up on its isolated astronauts’ mental health. Instead, the astronauts speak into a mic, and some kind of Alexa-esque AI analyzes their speech and determines if they are psychologically healthy or not. It’s Silicon Valley automation obsession par excellence, and epitomizes the neoliberal cultural moment — the reduction of everything, even human emotions, to a series of quantifiable, often binary metrics: Good or bad, yes or no.

Incidentally, a day before seeing "Ad Astra," I had received an email from my for-profit health care provider, Kaiser Permanente, asking me to fill out an online mental health quiz. The quiz asked a series of questions using simple metrics, had me to rate feelings on a one to ten scale, and then automatically gave mental health suggestions. The whole idea of it was, frankly, inhuman: talking to a computer program made me feel even more depressed, as if I weren't worthy of talking to a real human. Such programs are a great way to save on labor costs for the for-profit healthcare industry, which is why they do it. The inhumanity and callousness of these kinds of computerized tools speaks to the horrific drive for profit at the core of the capitalist work ethos, and I appreciated “Ad Astra's” honesty in that regard.

If there's one thing that the ruling elite want us to believe, it's that our political situation can stay the exact same as it is now, and the future will still be wonderful and rosy. Climate change will be solved, the middle-class will still exist, and we'll even be living in space — and it'll look like Earth does now, with Applebees in our spaceports and abundant jobs and a functional U.S. government on other worlds. Believing everything's okay, and that we don't need to change the status quo or toy with our economic system too much — this is a crucial message for the ruling class to convey to the masses. "Ad Astra" does a great job.