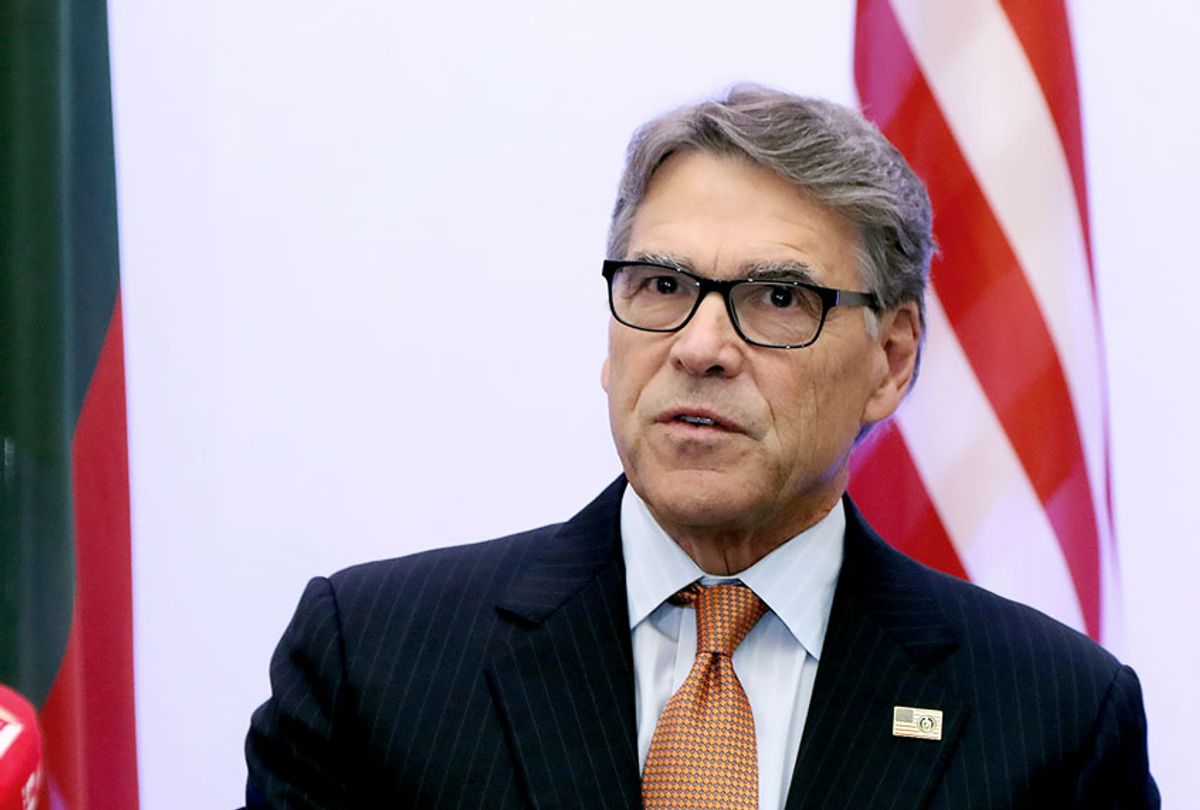 US Secretary of Energy Rick Perry delivers a statement after signing an agreement with Estonian, Lithuanian and Latvian counterparts on strengthening energy cooperation between the US and the Baltic States during a meeting in Vilnius, Lithuania, on October 6, 2019. - The United States and Baltic states on October 6, 2019 agreed to beef up cooperation to protect the Baltic energy grid from cyber attacks as they disconnect from the Russian electricity grid. (PETRAS MALUKAS/AFP via Getty Images)
--

Energy Secretary Rick Perry denied reports on Monday that he pressed Ukraine to install new management at the top of the country's massive state gas company, or that he plans to leave the Trump administration before the year's end.

Speaking at a press conference in Vilnius, Lithuania, Perry admitted making the recommendations to Ukraine's state-owned natural gas company, Naftogaz — but said he did so only at the request of the Ukrainian government.

He also confirmed reports that he had urged President Donald Trump to make the July 25 phone call to Ukrainian President Volodymyr Zelensky. The content of that call is at the heart of the Democratic-led impeachment inquiry into the president. Axios reported on Saturday that Trump told House Republicans that he made the call at Perry's request.

During the mid-July call, Trump pressed Zelensky to investigate unsubstantiated allegations about former Vice President Joe Biden and his son, Hunter Biden, according to a memo of the call released by the White House and a whistleblower complaint to the intelligence community that has been made public.

Perry said on Monday that he "absolutely" asked Trump "multiple times" to call Zelensky on matters related to energy and the economy — not the Bidens.

Energy issues, however, were not discussed during the July phone call between the two world leaders. A rough transcript of the call instead revealed Trump asked his Ukrainian counterpart to investigate the Biden family.

There is no evidence of wrongdoing by either Joe or Hunter Biden.

Though Perry has largely avoided controversy during his time in the administration, his recent Ukraine trips have embroiled him in the impeachment inquiry surrounding Trump's political actions there.

Perry has drawn scrutiny because he led the U.S. delegation to Zelensky's inauguration in May, a visit that came as the administration was working to determine whether the region's new leader would be receptive to Trump's demands, according to the whistleblower complaint. In leading the delegation, Perry replaced Vice President Mike Pence, who is facing mounting questions about his own involvement in the scandal.

No evidence has emerged that Perry participated in Trump's effort to pressure Ukrainian officials to probe Biden, but Sen. Bob Menendez, D-N.J, last week sent a letter to Perry requesting information about his interactions with Zelensky and other Ukrainian officials.

In addition to leading the delegation in May, Perry has visited Ukraine multiple times as energy secretary and helped craft a deal that increased U.S. coal experts to the country. He tweeted an image of his most recent meeting with Zelensky last month.

Perry was also a subject in a subpoena that House Democrats issued Trump's personal attorney Rudy Giuliani, who has emerged as the central figure in the scandal. The subpoena seeks information about communications that the Energy Department may have had regarding Trump's discussions with the president of Ukraine.

Text messages released last week by former U.S. special envoy for Ukraine, Kurt Volker, suggested that Giuliani was a primary advocate for arranging the call between Trump and Zelensky. Volker, who testified before Congress behind closed doors last Thursday, resigned amid the fallout over the burgeoning scandal.

The texts revealed that Volker and U.S. Ambassador to the European Union, Gordon Sondland, had indicated to Ukrainian officials that a White House meeting between Trump and Zelensky would be contingent on Ukraine launching investigations into interference in the 2016 election and Burisma, the Ukrainian gas company for which Hunter Biden served on the board.

Perry is not mentioned in the text messages.

Multiple news outlets reported Friday that Perry plans to step down from his post by December, though no official announcement has been made.

"I'm here. I'm serving. They've been writing the story that I was leaving the Department of Energy for at least nine months now," Perry said on Monday. "One of these days they'll probably get it right. But it's not today. It's not tomorrow. It's not next month."