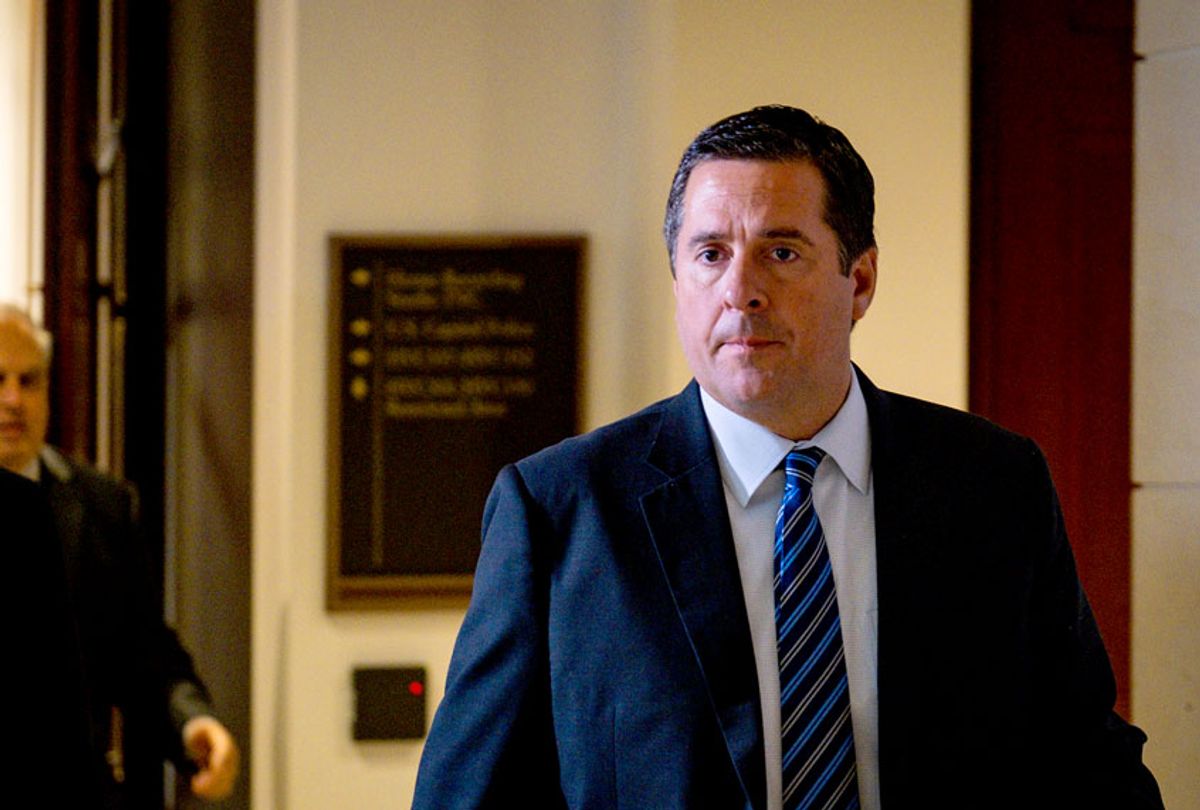 Rep. Devin Nunes, R-Calif., reportedly met with Andriy Telizhenko, the former Ukrainian diplomat at the center of a conspiracy theory which alleges that Kyiv conspired with the Democratic National Committee to procure dirt linking President Donald Trump's campaign to Russia in 2016.

The meeting, which was revealed by The Daily Beast, suggests that Telizhenko's connections in Washington are wider than previously known. Rudy Giuliani, the personal lawyer of President Donald Trump, has widely promoted the former diplomat's claims about alleged Ukrainian meddling in 2016 on social media and in television interviews. Trump has even bolstered the conspiracy theory.

"Congressman Nunes had a really interesting and good impact on me as a very positive and influential politician who loves America and is interested in Ukraine and developments on fighting Russia," Telizhenko told The Daily Beast. "We talked about how to fight Russian aggression in Ukraine and Russian propaganda."

The news outlet reported that the conversation was the only known encounter between two of the more central figures in the ever-developing story surrounding Trump's relationship with Ukraine. Salon has reached out to Nunes for comment.

Telizhenko worked at Ukraine's embassy in Washington from December 2015 through June 2016, according to a copy of his C.V. which he shared with The Daily Beast

Politico first reported in January 2017 about alleged efforts by the Ukrainian Embassy in Washington to obtain and disseminate dirt about Paul Manafort, who was Trump's campaign chairman for several months and is now serving a prison sentence for a litany of financial crimes unrelated to the 2016 election.

Telizhenko told the news outlet that former DNC consultant Alexandra Chapula and then-deputy chief of mission Oksana Shulyar directed him to research connections between Trump Manafort and Russia. Chalupa and Shulyar both denied any inappropriate conduct related to Manafort.

"They were coordinating an investigation with the Hillary team on Paul Manafort with Alexandra Chalupa," Telizhenko said at the time of Democratic presidential nominee Hillary Clinton's campaign.

Though most coverage of interference in the 2016 election focused on Russia's operation to obtain and disseminate information with the goal of harming Clinton's campaign, Telizhenko's allegation that the Ukrainian government worked with Democrats during the 2016 election to sabotage Trump has captured the attention of Republicans, conservative media and the president's most ardent supporters.

The reach of Telizhenko's allegations through conservative media was tracked in a story published earlier this week by BuzzFeed News, which called the former diplomat a "bespoke purveyor of conspiracy theories." NBC News also reported this week that Telizhenko met with Giuliani earlier this year to discuss his claims of election interference and the two have become friends.

Telizhenko's accusations have come under intense scrutiny as Trump faces an impeachment inquiry in the House of Representatives surrounding his communications with Ukraine.

A host of current and former U.S. officials have testified in recent weeks in the inquiry that Trump and his envoys leveraged a White House meeting and withheld nearly $400 million in military aid to Ukraine to pressure newly-elected Ukrainian President Volodymyr Zelensky to commit publicly to investigations into both the 2016 election and the Biden family. (Trump has repeatedly denied the existence of a "quid pro quo" and has decried the impeachment investigation as a "hoax.")

Telizhenko's allegations have appeared to capture the attention of impeachment investigators. A newly-released transcript of closed-door interviews conducted as part of the inquiry revealed that former U.S. Ambassador to Ukraine Marie Yovanovitch was asked if she was familiar with allegations that Ukraine meddled in the 2016 election.

Even Zelensky, the target of Trump's pressure campaign, has said he is "ready to investigate interference in the election from the Ukrainian side, if it took place."

Trump has repeatedly questioned and attacked the U.S. intelligence community's findings that Russians hacked and disseminated emails from the DNC and Clinton in an effort to help him clinch the presidency. He has frequently cited an unsubstantiated conspiracy theory that the hacked DNC server ended up in Ukraine — a claim which he noted in his call with Zelensky. The Department of Justice is investigating the origins of the investigation into Russian interference in the 2016 election.