The latest GOP defense of Trump evaporates with a whimper

In a evening hearing, Republican efforts to deny Trump withheld aid to Ukraine as part of extortion campaign fail 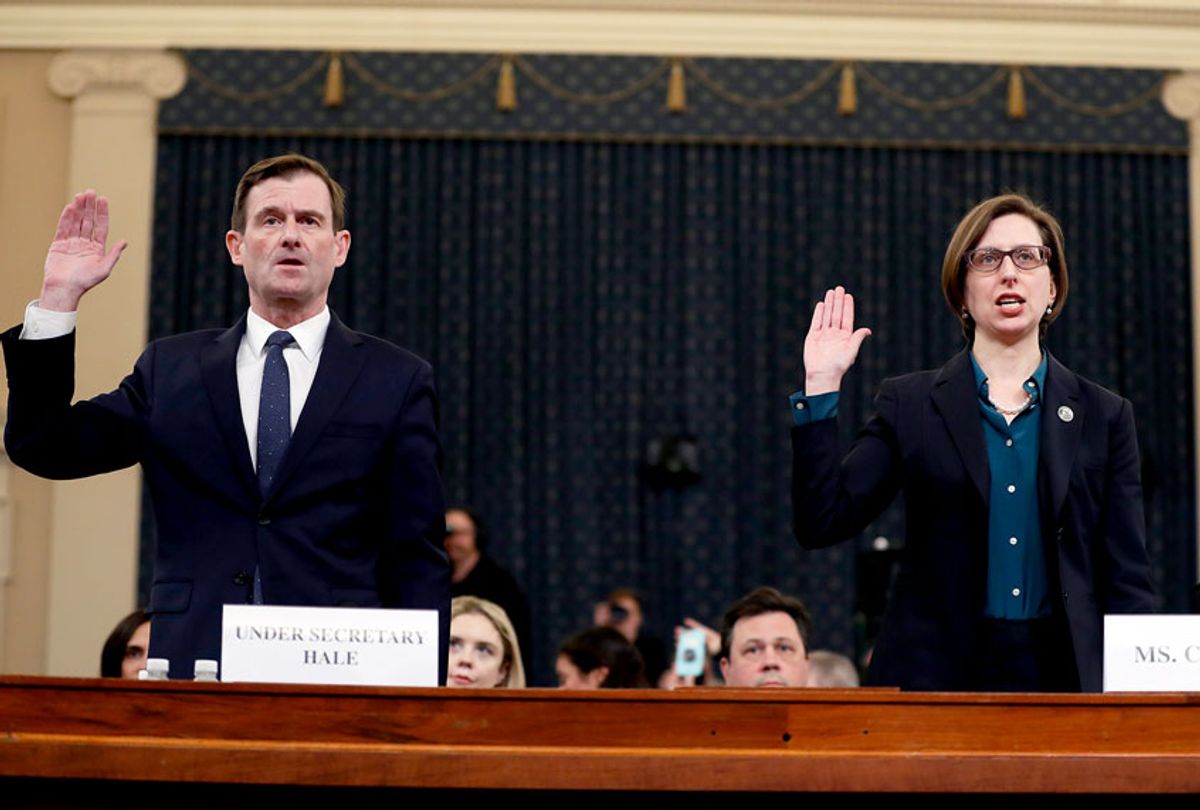 Deputy Assistant Secretary of Defense Laura Cooper, right, and State Department official David Hale, are sworn in to testify before the House Intelligence Committee on Capitol Hill in Washington, Wednesday, Nov. 20, 2019, during a public impeachment hearing of President Donald Trump's efforts to tie U.S. aid for Ukraine to investigations of his political opponents. (AP Photo/Andrew Harnik)
--

It was a day of blockbuster day of testimony from E.U. Ambassador Gordon Sondland, in which Sondland — who once gave Donald Trump a million dollars for his inauguration — decided to save his own hide by ratting out not just Trump and his lawyer, Rudy Giuliani, but seemingly half the senior staff of the White House.

But the day of impeachment hearings was hardly over. The House Intelligence Committee had scheduled testimony from Laura Cooper, a deputy assistant secretary at the Defense Department, and David Hale, the undersecretary of state for political affairs at the State Department. Hale was summoned by the Republican minority — though as House Intelligence Committee Chair Adam Schiff, D.-Calif., noted, House Ranking Member Devin Nunes, R.-Calif., has decided to pretend that Republicans aren't being allowed to call witnesses.

But — as the public learned Tuesday when the Republican-called witnesses ended up strengthening the case for impeachment — the Republicans ain't got nothing.

The focus of the evening hearing was the dispute over why Trump held up military aid to Ukraine. It was a somewhat surreal debate because, as Rep. James Himes, D.-Conn., pointed out early on, acting chief of staff to Trump, Mick Mulvaney, confessed in a press conference that the aid was withheld as leverage to get Ukrainian President Volodymyr Zelensky to offer public support for baseless conspiracy theories against Trump's political opponents. And, of course, there's a readout of a call where Trump literally asks that Zelensky do him "a favor, though" when Zelensky asks for the aid.

Cooper was originally summoned for closed-door testimony because she had raised concerns about the way Trump was holding military aid to Ukraine, even though she was apparently unaware of why Trump was doing it. (Her deposition so threatened Republicans that they stormed the hearing room, delaying her testimony for hours.)  Hale had been similarly called because he was a first hand witness to the smear campaign against then-ambassador to Ukraine Marie Yovanovitch, who seems to have been removed because Trump and Giuliani feared her anti-corruption views would interfere with his schemes in Ukraine.

It was an exhausting hearing, partially due to the hour, but also because of the dispirited Republicans walking like zombies through their distract-and-confuse defense strategy. Yet Cooper did reveal some new information that she hadn't known when she sat for an October deposition: her staff had records of multiple communications with Ukrainian officials showing that they were, despite Republican denials, quite aware that they weren't getting aid that they were expecting.

Hale, for his part, clearly didn't want to be there. He didn't even offer an opening statement and spoke as little as he could. Republicans clearly wanted him because he was willing to float the possibility that Trump was withholding the aid for some other reason than extortion, but he didn't exactly seem enthused about playing this role.

And we know it because, just hours before Republicans tried yet again to mount this defense, Sondland blew it up by making quite clear how sure he was, due to being right in the middle of the extortion conspiracy, that Trump was holding up the aid in order to force a reluctant Zelensky to go on TV and say stuff that Trump could use to stoke his conspiracy theories about Democrats.

This hearing just confirmed, yet again, that the Republican strategy is to go down endless rabbit holes, trying to make a fairly simple story — that Trump extorted Zelensky in an effort to cheat in the 2020 election — endlessly complicated. The hope is clearly that this will scare members of the public away from even trying to figure out what's going on, and to ignore the scandal entirely. This strategy may have induced some Americans to tune out of Wednesday night's listless hearing, but it's not at all clear that it will keep Americans from following the larger story illustrating Trump's obvious guilt.