Should Brad Pitt really win an Oscar for acting?

He's a favorite for his performance in Tarantino's "Once Upon a Time...in Hollywood," but for all the wrong reasons 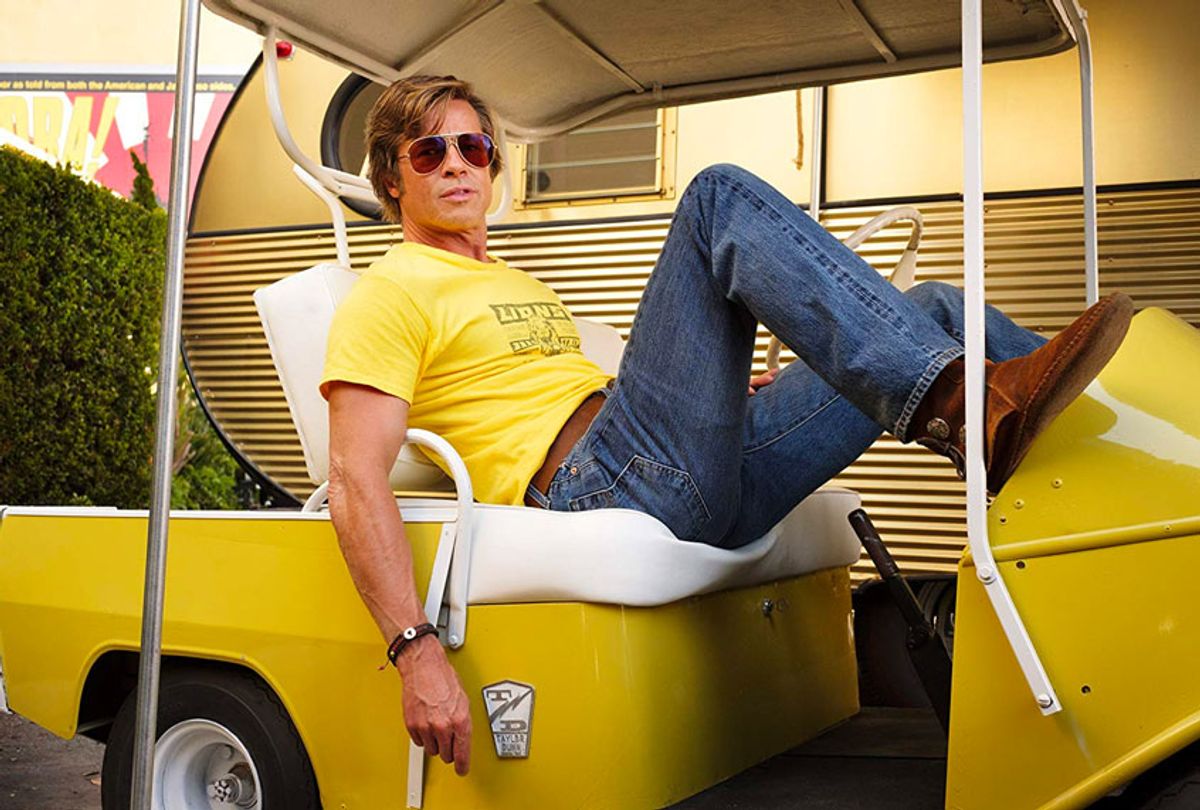 Brad Pitt in "Once Upon a Time... in Hollywood" (Sony Pictures Entertainment)
--

In an Oscars season rife with controversies, shutouts and disappointments, the one seemingly surefire, feel-good figure this year has been Brad Pitt. Nearly 30 years into his Hollywood career, the hardworking leading man has created some of our most iconic movie moments and developed an uncanny instinct for creative, audience-pleasing parts. Now, he seems a lock to take home his first acting Academy Award (he has one under his belt as a producer on "12 Years a Slave") for his supporting role as good-natured, possibly wife-killing, history-changing stunt double and righthand man Cliff Booth. But if ever there were a classic case of someone being the odds-on favorite based on overall industry goodwill than a singular performance, Pitt would be our greatest recent example. If merit alone earned awards, would Pitt really take it this year? Or to put it another way, can Brad Pitt act?

At 56, the Oklahoma native has entered a career stage where he seems at last to be forgiven for being so really, really, really, ridiculously good looking. Yet perhaps his best trick all along has been making his critics feel they shouldn't dismiss him as a so-so performer just because he's handsome, when in fact he might actually be just a so-so performer.

From the beginning, Pitt's always been clever about how he leverages his physical appeal, using it as an instrument to create his characters rather than a diversion from his efforts. Even in his breakout role, as a smooth talking grifter in 1991's "Thelma & Louise," Pitt seemed in on the joke that as long as he kept his shirt off, he could tell a woman point blank that he was a robber — and then effortlessly rob her.

His rise was instantaneous after that. It was as if the factory that had created ruggedly beautiful stars like Gary Cooper and Gregory Peck had suddenly spit out one special new edition just for the '90s. Campy starring roles followed in forgettable films like "Johnny Suede" and "Cool World," parts that played off Pitt's throwback appeal. Yet he also played the long game shrewdly, refusing to settle as simply agreeable beefcake. He sought out darker work in movies like "Kalifornia" (a film I still have to remind myself is not "Natural Born Killers"), "A River Runs Through It" and "Interview with a Vampire." He appeared in his first Tarantino-penned film, "True Romance," where he played a blissfully clueless stoner. And he had a knack for picking instant cult classics  like "Se7en" and "Fight Club," a movie that should have inspired a special Oscar category for Best Performance By a Pelvis just so Pitt could have won.

Yet when I think of the Brad Pitt of that era — the actor, not the celebrity he was in the World's Sexiest Man, Mr. Jennifer Anniston, name-checked in a Shania Twain song years — I remember his performance in the lesser known "The Devil's Own," in which he plays an IRA member and says things like, "Oi need dat mooney, Tum." He may not yet have an acting Oscar, but for this role, Pitt is widely regarded as delivering one of the worst Northern Irish accents ever committed in cinema. A few years later, in Guy Ritchie's "Snatch," Pitt played an Irish Traveller, and while he memorably delivered a comically unintelligible performance, it was not exactly a method actor's one. Ritchie reportedly made the character a Traveller because Pitt couldn't pull off a London accent, and Pitt recently revealed he based his character's dialect on a minor character on "Father Ted." Then there's his unfortunate "Everyting gwarn be iree" moment in "Meet Joe Black," an attempt that I assure you was cringeworthy two decades ago, and has since aged like milk. Even as he's filled up his IMDb page, his technical abilities have remained limited.

Admirably, Pitt could have spent his career doing the big superhero parts, instead of skewering that image in "Megamind" and "Deadpool 2." He could have done some lucrative spy series and be 20 years into the role by now. That's what movie stars do, right? He's consistently gravitated toward odder, more challenging work like "Burn After Reading." His previous acting nominations have all been for more idiosyncratic films — "Twelve Monkeys," "The Curious Case of Benjamin Button" and "Moneyball." Yet the impression he gives is not that of some weird, English arteeeste who disappears into his characters. He's just a hard-working regular guy who gets the job done. This is not without appeal.

And then there are those Tarantino movies. In "Inglorious Basterds" he carves up Nazis and helps rewrite a history where Hitler doesn't weasel out in a bunker suicide. (Surely there's a Tarantino-Pitt collaboration on the Jeffrey Epstein story somewhere in our collective future.) He also delivers another accent that gets a little shaky. Now, in his Oscar-nominated performance in "Once Upon a Time . . .  in Hollywood," Pitt plays a man who is seasoned, heroic, a little sinister, and still looks insanely good shirtless. In other words, he's a Hollywood executive's wet dream of himself.

Is "Once Upon a Time . . . in Hollywood" any good? I side with my colleague Matt Rozsa and say, it decidedly is not. It's a meandering mess, from a filmmaker whose works increasingly play into the classic "If I was there, things would have gone a lot differently, let me tell you" fantasy. (Take that, hippies.)

Though there is not much to see in Pitt's performance that he hasn't already delivered in at least a dozen other eccentric-and-manly-but-the-ladies-like-him-too performances, critics loved it. The New York Times praised Pitt's "down-to-the-bone minimalism" and the star has already picked up a shelf of prizes, earning goodwill at each stop on the road to Oscar for his charming acceptance speeches.

Though the Oscar is only supposed to be for one performance, Pitt's awards trajectory this year has no doubt been boosted by "Ad Astra," another acclaimed movie with an appeal that entirely eluded me. As astronaut Roy McBride, Pitt is a middle-aged man searching the solar system for his daddy. It's desperately tedious and doesn't make sense, and I would like a refund for those hours of my life. Pitt's stoic performance doesn't help matters, but he does get to well up with emotion at times, which does technically constitute acting.

Writing in the New York Times recently, critic Manohla Dargis observed that earlier in Pitt's career, "It became a favorite cliché to write that he was a character actor trapped in the body of a star . . .  Some of this, I think, stems from a suspicion of beauty, that it can't be trusted." Yet the "character actor in a movie star's body" designation seems more fitting for Pitt's costar and fellow Oscar nominee Leonardo DiCaprio, who from his earliest roles in "This Boy's Life" and "What's Eating Gilbert Grape" has always displayed serious native talent. Or look at another of his "Once Upon a Time . . . " costars, Oscar nominee (for "Bombshell") Margot Robbie, who in the last six months skillfully has played Sharon Tate, Harley Quinn, and an ambitious Fox News employee, and among other laudable elements, delivered a different (and believable) accent for each.

In contrast, Pitt seems to dazzle by sticking to similar characters in very different movies, a neat bit of acting sleight-of-hand. If he is indeed a character actor, he sure likes to stick to the same character — unselfconsciously virile, easy to imagine chewing on a toothpick.

I happen to enjoy plenty of Pitt's movies and even his performances. I could watch him eat his way through "Ocean's 11" all day, and I can't imagine any other actor delivering the immortal line, "What's in the box?" But his seemingly locked-down Oscars juggernaut is not a reward for a meticulous performance in a stellar movie. That is absolutely not what is happening here. It's a prize for consistency, charm and charisma over several decades.

This shining moment also happens to come at one when the industry is still clearly not ready to fully reckon with itself. It's been only two years since the real Sharon Tate's famed widower, Roman Polanski, was removed from the Academy. And this year's crop of Oscar nominees once again conspicuously fell short on honoring more diverse and deserving contenders. That's not Brad Pitt's fault. But it's easy to see how his role represents a certain nostalgia for a certain era, when being a movie star didn't mean you had to be an actor too.